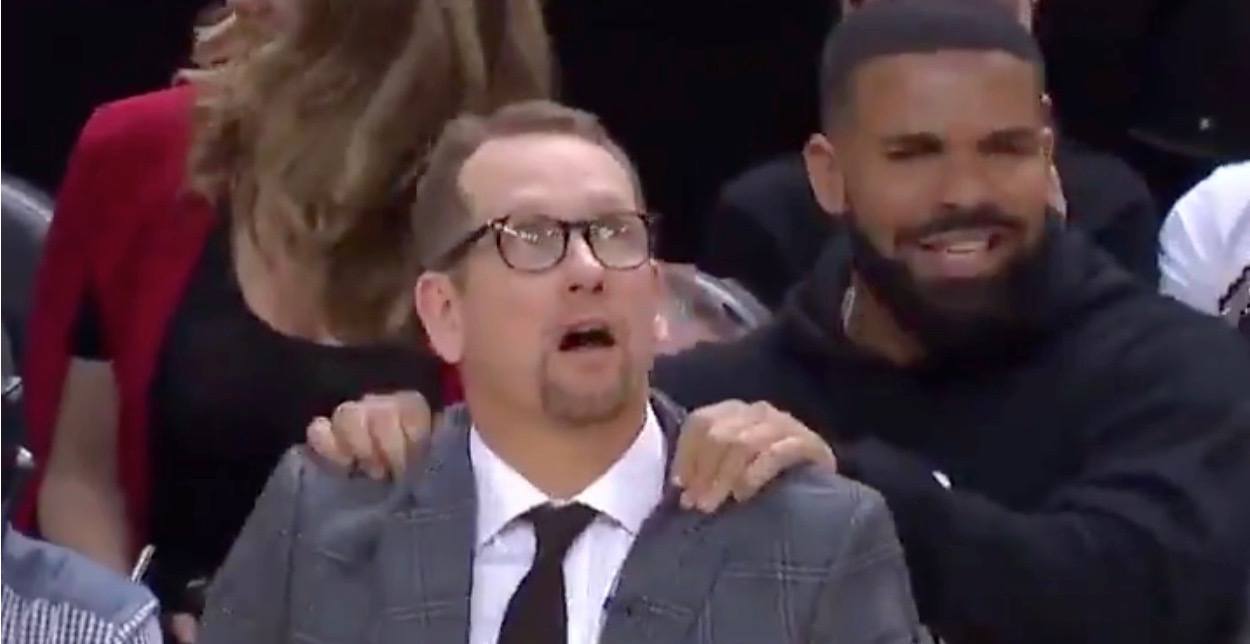 In case you’ve been living under a rock, the Toronto Raptors played a basketball game last night.

And when, in the 4th quarter, the Raps were up 96-82 with nine and a half minutes to play and things were looking good for the home team, Drake could no longer contain his excitement.

So, naturally, he walked over to head coach Nick Nurse and game him a quick and encouraging shoulder rub.

Get you a hype man like Drake. 😂#WeTheNorth | #NBAPlayoffs pic.twitter.com/8X7pVo0Wvg

Nurse, to his credit, doesn’t even react. Or, at least, he reacts much the way he does to most things that happen during a game — with mouth ajar.

If it wasn’t already abundantly clear, the Toronto Raptors are Drake’s team.

Their practice facility has his OVO branding on it, he often sits court-side, occasionally interviews players, performs charity work with the team, has helped double the Raptors’ value since becoming a global ambassador, encourages some of the game’s biggest players to talk love for Toronto, willingly reversed his own curse, and has entire game nights dedicated to himself.

Oh, and he has a pretty decent backup plane in case the Raptors ever need a lift to a game.

Which is to say, if you’re at all surprised that Drake is allowed to wander up and down the sidelines freely massaging NBA coaches, you haven’t been paying attention.

Drake is just out here living his best Raptors life — we should all be so lucky.

No word yet on whether or not Drake will be letting himself into the huddles.