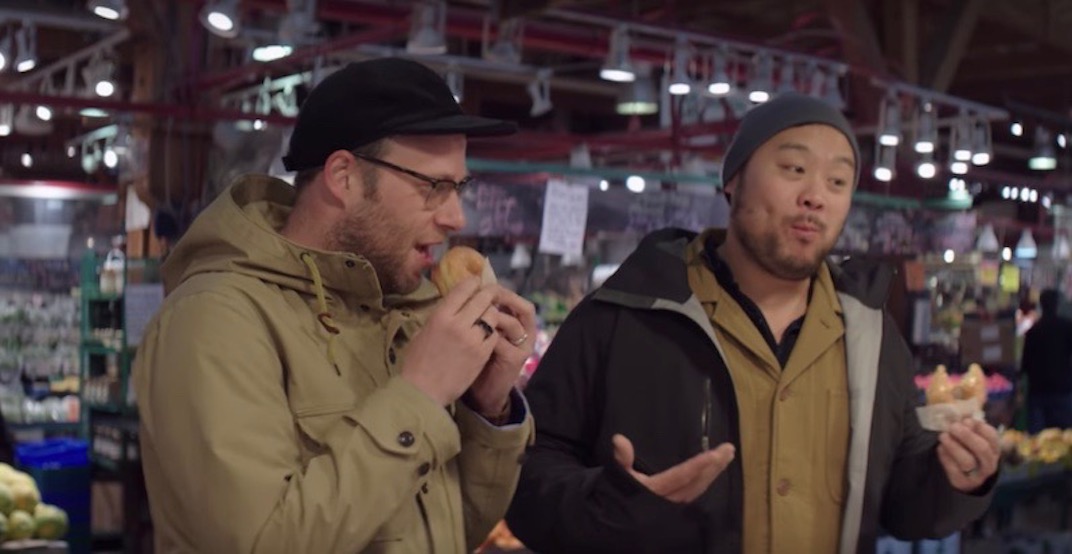 David Chang might be opening his own restaurant in Vancouver next year, but that didn’t stop the American restauranteur and Momofuku owner from highlighting some of our region’s best foodie spots that already exist in his new Netflix show.

Breakfast, Lunch & Dinner is officially streaming, which means you can watch all four episodes of Chang travelling and eating his way through four different cities with celebrities, but mostly, you’ll likely want to watch Chang and homegrown funny guy Seth Rogen exploring Vancouver.

The pair chatted everything from the 2011 Vancouver Stanley Cup riot to housing prices, and even went fishing for Dungeness crab and Chinook salmon.

So where did the famous foodie choose to head in and around our beloved city? We’ll tell you before you even watch (spoiler alert).

Here are all the Vancouver spots David Chang went in his new Netflix show.

Chang’s first scene from the series after the title sequence shows him walking through the chic downtown hotel to meet Rogen out front.

The two head here to smoke one of Rogen’s hand-rolled joints, because what else do you do before a food crawl in Vancouver?

We’ve always known these Vancouver doughnuts were good, but the Granville Island Public Market vendor got a serious shoutout from David Chang on this show. Chang calls these doughnuts “tremendous” and we’d have to agree. He also called the Jelly Doughnut one of the best things he’s ever tasted, so if you haven’t been to this local spot, run don’t walk.

Known for its dim sum, seafood, and Cantonese cuisine, there was no denying Chang and Rogen were in for a treat at Sun Sui Wah Seafood Restaurant. The two feast on a selection of offerings here including Siu Mai and chicken feet among other things.

After smoking some more pot, Chang and Rogen explore the VanDusen Botanical Garden hedge maze while cracking up at every wrong turn.

The duo heads to this Fraser Street gem and pick up a couple of samosas and devour them while sitting outside of the eatery chatting.

Seth Rogen finally comes face-to-face with the octopus named after him at the Vancouver Aquarium, Ceph Rogen.