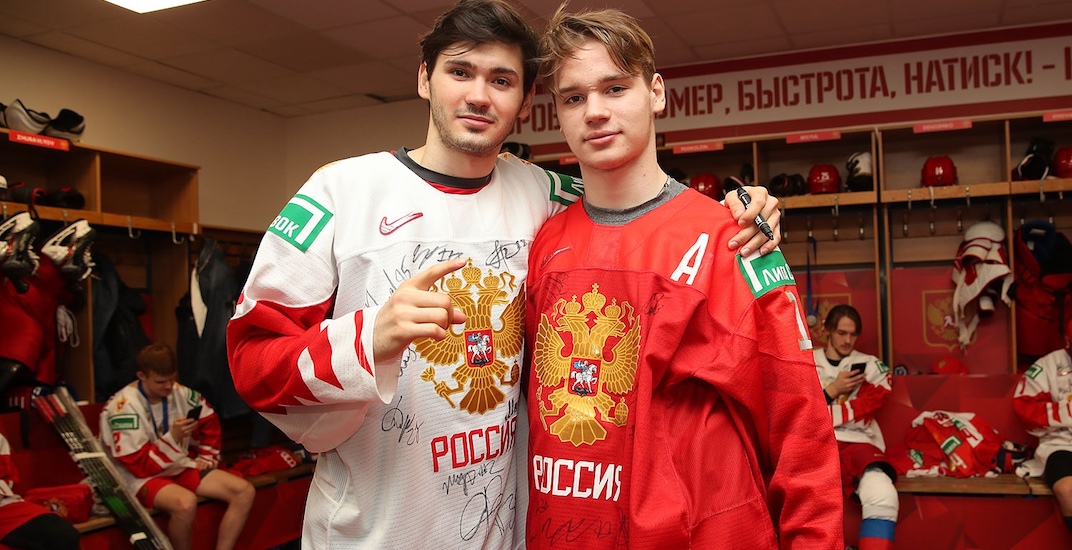 The future looks bright for the Vancouver Canucks according to TSN Director of Scouting Craig Button, and we’re not even talking about Elias Pettersson or Quinn Hughes.

TSN released Button’s annual ranking of top 50 NHL-affiliated prospects today, with three Canucks prospects cracking the top 40. Only one team had more prospects inside the top 40, with four coming from the Arizona Coyotes.

Canucks first-rounder Vasili Podkolzin was ranked 14th following his stint with Russia at the World Juniors. While the 18-year-old winger didn’t make headlines like fellow Canucks prospect Nils Hoglander, he did collect a respectable five points (1-4-5) in seven games, helping Russia to a silver medal.

Podkolzin’s numbers are misleading according to a number of prospects experts, as he set up his teammates with glorious scoring chances on a number of occasions. This brilliant pass, for instance, didn’t result in a point:

Hugo Alnefelt with an incredible stop!

Vasily Podkolzin set up Kirill Marchenko for a gimme but the Swedish netminder had other ideas. #WorldJuniors

A 6-foot-1, 192-pound power forward, Podkolzin’s numbers with his club teams in Russia haven’t jumped off the page either. He’s been used sparingly by his KHL team, spending more time in the VHL (second-tier Russian pro league), scoring eight points (3-5-8) in 16 games.

Still, Button has Podkolzin ranked ahead of three players (Alex Turcotte, Moritz Seider, and Philip Broberg) who were picked ahead of him at last June’s NHL Draft, which should be reassuring to Canucks fans. Montreal Canadiens prospect Cole Caufield was the only skater drafted behind Podkolzin to be ranked ahead of him on TSN’s list.

Hoglander finished third in scoring at the World Juniors, and is ranked 35th by TSN. A second-round pick by the Canucks last year, the 19-year-old winger scored a spectacular lacrosse-style goal for Sweden in his opening game of the tournament.

More than just the points, Hoglander wowed crowds with his display of skill throughout the tournament:

Nild Hoglander is silly fun. He picks the puck up behind the net and tries to flip it in front instead of going for The Michigan. #WorldJuniors #Canucks pic.twitter.com/pKfjcyKHFB

Hoglander’s inclusion is particularly impressive when you consider that 12 first-rounders from his draft class were not listed in Button’s top 50.

Rounding out the top 40 is Tyler Madden, who at age 20 was too old to participate in the World Juniors this year. The American centre is performing great with Northeastern University, scoring 29 points in 20 games to lead his team in points thus far.

Madden was a third-round pick (68th overall) in 2018, but is providing first-round value according to Canucks prospects expert Cam Robinson. Just 11 other players from Madden’s draft year were ranked ahead of him.

Tyler Madden gets in on the party with his 15th of the season. That mark stands as the 2nd most IN THE NATION. #Canucks

Ranked fourth among the Canucks’ top five prospects (but outside Button’s top 50) is Brogan Rafferty, a 24-year-old defenceman who the team signed as a college free agent last year. Rafferty currently leads all AHL defencemen in scoring, notching 30 points in 36 games with the Utica Comets.

Kole Lind is ranked as the fifth-best Canucks prospect, on the strength of a bounce-back season in Utica. Lind, 21, has 29 points in 36 games with the Comets — putting him behind only Reid Boucher, Sven Baertschi, and Rafferty on the team.