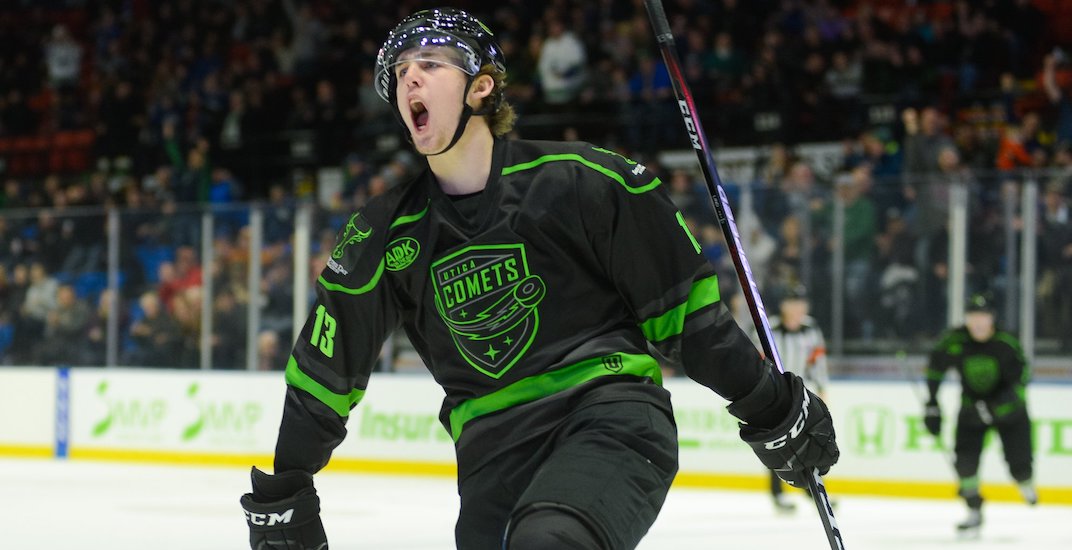 “Why isn’t anyone taking Kole Lind?”

It was a defining moment from Canucks’ GM, Jim Benning’s mic’d up session at the 2017 NHL Draft. After selecting Elias Pettersson fifth overall, Benning was flabbergasted that no one had stepped up to draft Lind late in the first round. As the second round began, Vancouver was more than happy to take him at 33rd overall.

What transpired next is fairly common. Lind settled in for a third and final WHL campaign as a 19-year-old. He was deployed in all the fun situations for a strong Kelowna Rockets club and produced impressively, scoring 39 goals and 95 points in 58 WHL games.

He was the last cut from Team Canada’s World Junior Championship squad. He scored goals like this:

The expectations spiked around the province.

What transpired next also isn’t uncommon.

As a 20-year-old first-year pro, Lind struggled to adjust to the pace of the American Hockey League. He was a regular on the healthy-scratch sheet, and when he was in the lineup, he lived and breathed with the bottom-six forwards. As you may have guessed, his numbers were less than stellar, scoring just five goals and 17 points in 51 games.

The fan base began writing him off.

However, there were positive signs for the power winger last season. As the year wore on, he found a niche on the third line surrounded by veterans. He simplified his game and began to make the right play more often than not. His feet slowly started to catch up. His forechecking was most impressive.

Finding success in his second year

Now, as a sophomore with Utica, he’s showing why the Canucks so high on him.

Lind’s blend of power and skill that made him a star in the Western League have begun to rear their head as a professional. He’s found a partnership with the team’s long-time leading scorer, Reid Boucher, and is off to a blistering start with seven points through the team’s first five games. It took him until game No. 26 to hit that total a season ago.

Kole Lind with his first of the season. He’s up to 6 points in just 3 AHL games.

It took him until game #22 (January 6) to record his 6th point last year. pic.twitter.com/G5aT6A4Bw0

The most obvious note that has been added to his tune is confidence. Lind (#13) appears comfortable in his role. He’s become accustomed to the pace of the league, of the coaching staff, the travel, the expectations. His play-creation has shot up exponentially.

He’s seeing the ice a lot better and his awareness is evident. Watch this pass after curling to regroup at centre:

Additionally, and perhaps just as important as is offensive totals rising, is his intensity. The nastiness in his game has returned. Historically, when Lind is engaged and igniting havoc, he’s playing his best hockey.

Now, just because the second-year pro is off to a hot start, does not mean he’s knocking on the door for his first taste of NHL action. The Comets are deep this season. Mariana’s Trench deep.

The somewhat surprising additions of Sven Baertschi and Nikolay Goldobin to the club immediately knock him down two pegs. Adam Gaudette finding his way down slides him back another slot as well. And that’s fine.

Lind has plenty to work on still. The 21-year-old can be quicker with his outlets and decision-making in his own end.

Additionally, the 6-foot-1, 186-pound winger needs to shoot the puck a lot more. This is a player who averaged nearly four shots-on-goal per game in his final WHL season. His first AHL campaign yielded just 1.25 shots per game, and so far this year, he’s down to just 1.2. An improving shot rate will be even more telling that he’s near an NHL call-up.

The public perception of Lind has had more ebbs and flows than a trip to Playland. But what’s certain is we’re witnessing the evolution of a player that management was high on during the draft and remain positive about two years later. Development is hardly ever linear, but the signs are certainly positive for the Canucks’ 2017 second-rounder.