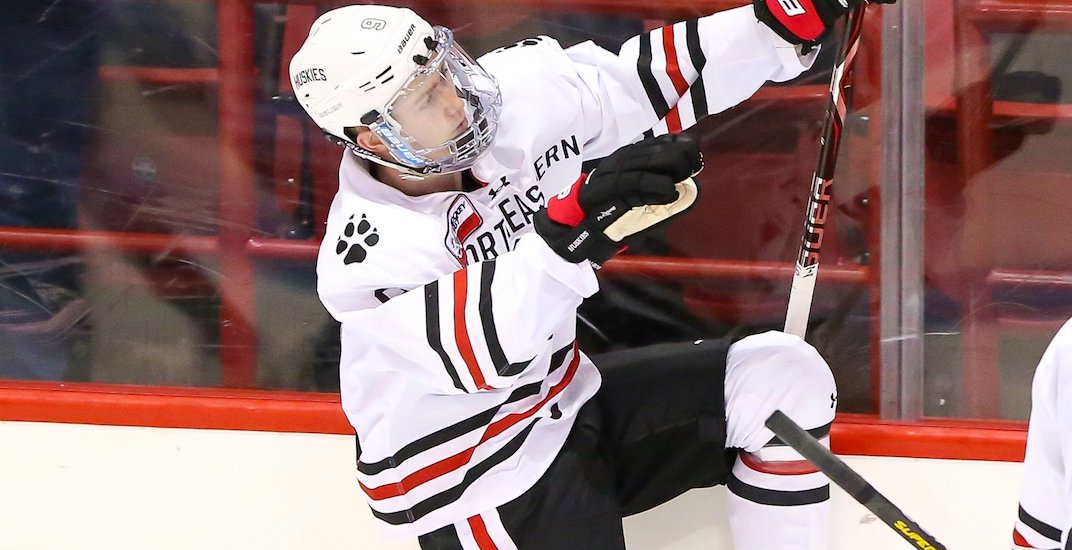 There are times in life where you go against the grain and end up correct.

Those moments deserve a back-pat.

Then there are times when you stick your neck out and end up being wrong. It’s important to stand up and own those mistakes. Ahead of the 2018 NHL Draft, I had Tyler Madden ranked at the end of the fourth round.

Madden showed well down the stretch for his USHL club, but he was rail thin and had under impressed in my early-season viewings. I questioned his upside. But the Canucks stepped up and selected him early in the third-round, ahead of a player (Jake Wise) whom I had rated as a first-round talent.

It’s been 18 months and those two players should have been flipped on my board. Madden has watched his stock explode upwards while Wise has struggled mightily against college competition. It was a miss on my part. But we live and we learn. And we give the Canucks scouting staff the back pats that they deserve.

Smooth transition to the NCAA

Madden has been everything for Northeastern since entering the NCAA at the beginning of the 2018-19 campaign. As a freshman, the centre slid seamlessly into the first line hole left by fellow Canuck, Adam Gaudette.

His smooth transition to college hockey landed him with 12 goals and 28 points in 36 contests. That put him in the top-10 for U20 skaters in the nation and a nod on the Hockey East All-Rookie Team. He was a lineup riser for the Americans at the World Junior Championships and scored some big-time goals for the Huskies while adding some just as big celebrations.

The #HowlinHuskies will have a chance to defend the #Beanpot next Monday! pic.twitter.com/TSbVw6plsL

Taking the next step this season

This season began with a bit of a thud, as the now-20-year-old went pointless through his first three games. But since then, he’s been a man possessed.

Scoring three points last weekend against Boston University, Madden is currently riding a 13-game point streak that has propelled him right near the top of the national leaderboard with 22 points (12-10-22) in 16 games.

His 11 goals LEAD THE NATION #Canucks

The most impressive evolution to Madden’s game this season has been his shot rates and finishing ability.

His 67 shots on goal (4.17 per game) sit second in the nation. Meanwhile, Madden’s 12 goals have already matched his season-long output from a year ago in 20 fewer games. That mark currently co-leads the entirety of college hockey.

Once considered more of a playmaker, this additional threat has made the Florida-native a matchup nightmare for opposing coaching staffs.

Madden, whose father John was a three-time Stanley Cup winner and Selke Trophy holder, is a menace in the corners while flying in on the forecheck. He accomplishes this despite weighing just 155 pounds.

There was some talk of Madden turning pro at the conclusion of last season but the decision was made for the youngster to go back to school and spend his weekdays in the weight room as the NCAA schedule allows for more practice and muscle-building time compared to most other leagues. The same discussion will surely take place this spring, though it would seem far more likely that the 5-foot-11 centre will join the AHL’s Utica Comets down the stretch – assuming his Huskies squad doesn’t run deep into the NCAA Frozen Four tournament.

While some players struggle to adjust to the rigours of professional hockey, something tells me Madden’s skill set will transition nicely. It won’t be long before we’re seeing his feisty and skilled brand of hockey knocking on the door to the NHL.

Historically, the Canucks haven’t made a habit of hitting outside of the first round, which is key in organizations staying competitive for the long haul. And when it comes to Madden, the Canucks certainly appear to have found a first-round asset in the third-round.