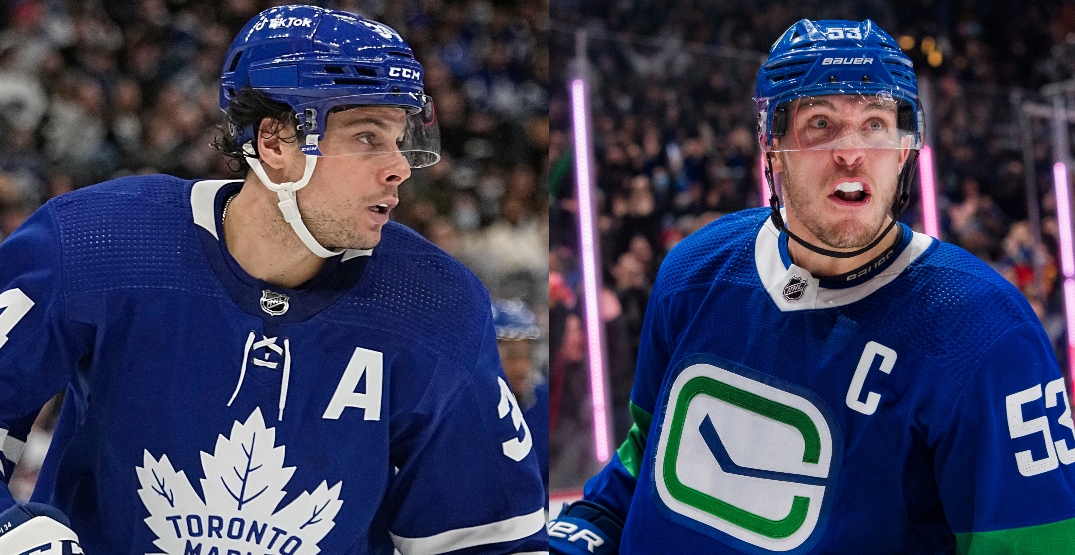 The Vancouver Canucks and Toronto Maple Leafs have been put on hiatus.

Vancouver’s game tonight against the Toronto and Sunday’s game against the Arizona Coyotes have each been postponed due to COVID-19.

“Due to a number of Toronto and Vancouver Players entering COVID protocol over the past two days, tonight’s Toronto-Vancouver game and tomorrow’s Arizona-Vancouver and Toronto-Seattle games have been postponed,” the NHL said in a release.

“The decision was made by the NHL’s, the NHLPA’s and the Clubs’ medical groups.

“The League is in the process of reviewing and revising its regular season schedule.”

The National Hockey League announced today due to a number of Toronto and Vancouver players entering COVID protocol over the past two days, today's Toronto-Vancouver game and tomorrow's Arizona-Vancouver games have been postponed.

Both games were to be the last to be played at full capacity before British Columbia’s new health order restricts arena capacity to 50% starting on Monday.

“Tickets for the Canucks games this weekend will be valid for the rescheduled dates,” the Canucks said in a statement. “Ticket holders are asked to hold onto their tickets and the Canucks will provide more information as soon as it is available.”

Vancouver is scheduled to play at the San Jose Sharks on Tuesday and host the Anaheim Ducks on Thursday.

Our games vs. Vancouver & Seattle have been postponed. https://t.co/KDamN1XSbN

The Leafs also had Sunday’s game against the Seattle Kraken postponed.

The Leafs and Ottawa Senators will be playing games at 50% capacity when in Ontario, with food and drink sales banned in order to increase mask-wearing by fans.

Toronto’s next scheduled game is Thursday at the St. Louis Blues.

Multiple games across the NHL have been postponed in recent days, with the Calgary Flames shut down until at least after the Christmas break. The Florida Panthers and Colorado Avalanche have also been shut down, as have the Boston Bruins and Nashville Predators.