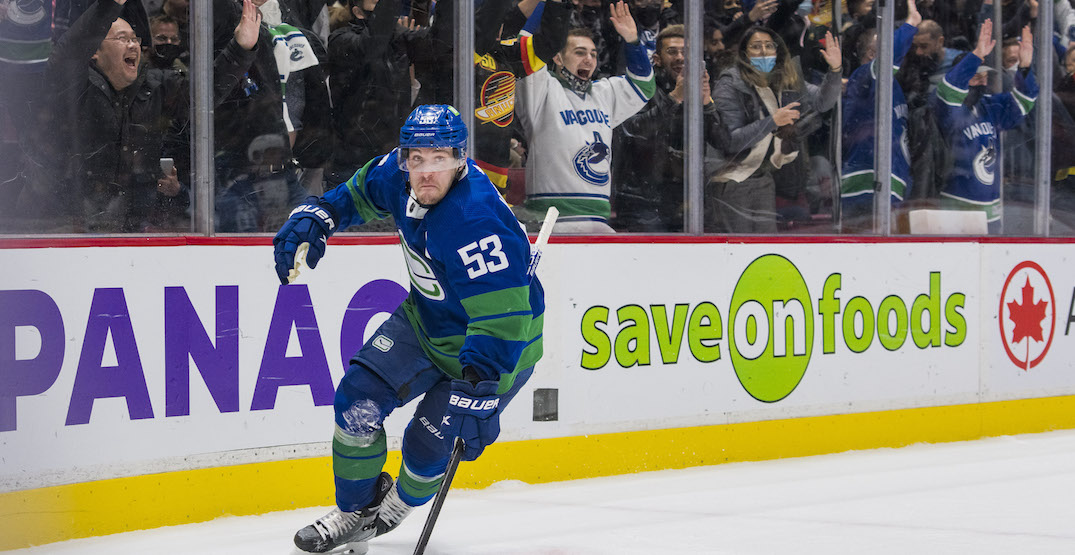 What a difference a couple of weeks can make.

And I’m not talking about the Omicron variant.

Less than two weeks ago, the Vancouver Canucks were at their lowest. They lost 4-1 on home ice, with fans booing and chanting for Jim Benning to be fired. A fan threw a jersey on the ice.

What happened next, after all the hirings and firings, nobody could have predicted.

The Canucks are the hottest team in the NHL, going 6-0 since Bruce Boudreau took over as head coach. Boudreau is one of just six coaches in NHL history to start his tenure with a new team with six straight wins.

When the Canucks hired Boudreau they were nine points back of a playoff spot. Now? Four points.

Teams ahead of Vancouver in the standings have games in hand, so it’s still going to be a tough hill to climb, but clawing back into the mix this fast has been an incredible feat.

Benefitting from the Bruce bump

One of the players that has benefitted from the Bruce bump has been Bo Horvat. The Canucks captain has six points in six games, including three goals.

“It’s been great,” Horvat said in an exclusive interview with Daily Hive. “He’s a really good coach, obviously. He’s been around the league for a long time and knows exactly what he’s doing with his players… It’s been a pleasure so far. Hopefully we can keep those ‘Bruce there it is chants’ going for a couple more games here.”

Boudreau is already a fan favourite in Vancouver, with fans chanting his name regularly after goals and successful coaches challenges. And yet, the Canucks bench boss has said he doesn’t like the “Bruce there it is” chants.

“I think the fact that he doesn’t like it is probably what’s feeding the fans to do it more to be honest with you,” Horvat added. “I don’t know who came up with that… but Vancouver fans seem to pull anything out of a hat, it’s funny.”

A more divisive topic among fans this week has been the team’s new goal song. “Don’t you (forget about me)” by Simple Minds was rolled out for 80’s night against the Winnipeg Jets, but it’s sticking around, Canucks DJ Tom Fleming told Daily Hive.

Results from our poll question were split.

The verdict from the captain?

“It’s different,” Horvat said. “I think it’s catchy. It’s good. It gets the fans going. The building was rocking there last night when we came back so it’s always fun to see.”

The Canucks erased a three-goal deficit to win in regulation time, which is the first time they’ve done that at home since 1996 according to Sportsnet Stats.

Are you not entertained?!?!? pic.twitter.com/DT4u1dYivS

Horvat scored two goals in the game, including the game-winner on the power play. He’s been utilized differently with the man advantage, lining up on the flank instead of his more familiar spot in the bumper role.

He scored a similar goal the next game in San Jose.

Bar down and in off the captain's hot stick 🔥🏒 pic.twitter.com/q4jyHE1hYM

“Usually I am the bumper guy, but I don’t mind playing the flank. I think utilizing my wrist shot a little bit more is going to help. Obviously it felt good to score that one [Tuesday] night. It’s totally different. You’re more of a passer and a playmaker a little bit more on the half wall, where in the bumper you’re being a support guy and a shooter. It’s a bit of an adjustment but I’m liking it so far.”

Horvat said the game-winner, which came after he snuck down low and received a great pass from J.T. Miller, wasn’t a set play.

“It was a little bit of a spur of the moment play… Millsy made a heck of a pass to get it to me and [I was] just trying to be strong on my bottom hand and ended up getting it quick enough to beat the goalie. It must have been all the oatmeal I’ve been eating in the morning!”

The oatmeal Horvat’s referring to is Quaker oatmeal, for which the Canucks captain has become a spokesperson for, as part of the #HockeyHungry campaign with Hockey Canada.

Horvat’s usage has changed under Boudreau. He’s playing nearly two minutes less per game compared to the previous 25 games under Travis Green, but he’s also being utilized more on the penalty kill.

Horvat came into the league billed as a defensive centre, but he’s been known more for his offensive flare. It seems under Boudreau, he’s getting a shot to become a true two-way centre.

“I love penalty killing, I always have and always will love it,” said Horvat, who is averaging 1:09 shorthanded minutes under Boudreau, up from 0:36 under Green. “Bruce kind of brought me back into penalty killing again, which has been awesome. It’s something that I love to do and something that I did in junior all the time. I was known as kind of a defensive guy. We kind of got away from it for three years/four years, and I’m happy to be back on it again.”

On Canada’s radar for the Olympics

Horvat confirmed that he was contacted by Hockey Canada, as one of the players on the long list being considered for the Olympic team. He’s probably a long shot to make it, but just being in contention says something about how well regarded he is around the league.

“Obviously just to even be considered, is pretty amazing.”

Due to Omicron, there’s no guarantee that NHL players will go to the Olympics at all. Horvat wasn’t even sure if he’d be flying to San Jose when I spoke with him, as the team was awaiting more COVID tests.

“Yeah, to be honest with you,” Horvat said when asked if he was getting flashbacks from the outbreak that rocked the Canucks last spring. “Obviously we feel a lot more safe now that we’ve been vaccinated. But it’s still scary. We still want to be safe, and keep your family safe as well.”

Horvat, who turns 27 in April, is now the longest tenured player on the Canucks. He likes it here, and he wants to win here too.

“Obviously I love the city and I think our fans are super passionate,” said Horvat. “They want us to win so bad and rightfully so. They’ve been waiting for a Stanley Cup here, and a good playoff run for a long time, and they deserve it.

“I think it would just be an awesome place to win a Stanley Cup and bring a Stanley Cup here to Vancouver. That’s obviously my No. 1 goal, being a Canuck and to bring it here. Hopefully we can do that here in the near future.”