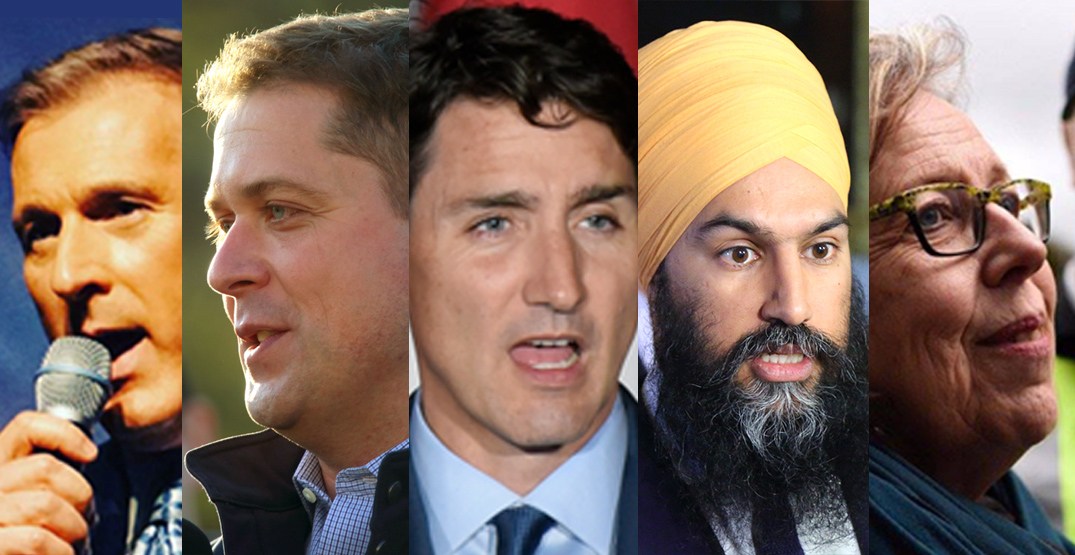 While some are waiting for parliamentary pages to help them don armour and hardening their knuckles for the election cycle, many of us would just like it if the government kept the roads relatively well paved, the water clean enough for everyone to drink, the military dressed in the right colour of camouflage, and businesses prospering without burning the ecosystem down around us in the process.

The 2019 federal election is officially descending upon the country — whether we’re ready for it or not.

Players in the upcoming election are likely practicing their stump speeches in front of the mirror, have a focus group-tested wardrobe selected, and are hiding the latest edition of party opposition research under their pillows. It’ll be a month of social media ad buys, sharpened talking points, and poorly put together slogans from all sides.

The problem with this election, like so many others before it, is that while the field is full of players, there isn’t an abundance of talent. It’s tempting to vote based on general ideology, gut feeling, or just traditional preference, I’m here to tell you that no matter what box you tick, the choice will likely be bad, unsatisfying, and could end up even being downright awful.

No matter what side you sit on the ideological fence, there’s no good option.

Years ago in 2015, a smiling and youthful man with a dynastic last name and a penchant for jogging shirtless was swept into the Prime Minister’s office. He’d hit all the major points of a progressive candidate during a furious and rapid campaign, promising reform and pre-rolled joints for everyone. The Liberal Party, sitting in third behind the NDP, leapt all the way up to earn itself a majority government.

But sitting at the tail end of one term, Trudeau’s meteoric rise has arched downward and is swiftly hitting the earth, even burying itself a few metres down for good measure. Recent polling has placed the Liberals ahead of the Conservatives, but these new numbers come after only a few months ago when the Tories polled ahead, in some cases by reasonably significant margins.

But opinion polls are tricky in Canada. We do not vote based on a majority, it’s a riding system of urban and rural puzzle pieces that make up an angry whole. With Liberal strongholds no longer sure bets, Canada’s first political prince may be in trouble.

Some of Trudeau’s campaign promises have come to fruition, but the governing party has fallen flat on the more substantive initiatives that had won voters in the first place. If asked in 2015 about first past the post voting system, his comment on election reform was so dire and urgent that it was a shame we had to live through one more round of it. In fact, the previous Liberal Platform spells out their commitment to “ensuring that 2015 will be the last federal election conducted under the first-past-the-post voting system.”

Yet after receiving a majority government, after running on the file, Conservatives under then interim leader Rona Ambrose demanded a referendum, and rather than move forward, negotiate, or even capitulate to the recommendations of a Conservative, Green, Bloc, and NDP dominated reform committee, Trudeau and his cabinet dropped election reform altogether.

Once a complicated and nuanced issue became the policy equivalent of a staring contest, and the Liberals blinked.

After all this, the once seemingly PR-savvy Prime Minister’s Office has slid, stumbled, and fallen into several piles of sh*t along the path to the 2019 election. Just to name a few, there was the general SNAFU that was Trudeau’s trip to India, the SNC Lavalin affair, the dropping of charges against beleaguered former Vice-Admiral Marc Norman, continuing water issues in many First Nation’s communities, and a carbon tax battle in Ontario — coming soon to Alberta.

The Liberal’s promised change has been more of the same — only legally higher.

Scheer has received many gifts from the current government, but while the Prime Minister, who trounced Scheer’s predecessor, continually hands him nothing but scandals made of silk, the opposition leader has so far been unable to spin it into anything other than, well,  spin.

Trudeau’s government was elected for a lot of reasons, all of which were based on a solid foundation of not being Steven Harper. Scheer seems to have taken that page from the Liberal playbook, billing himself as the antithesis of everything Trudeau touches.

This strategy has sent Scheer bouncing from issue to issue, condemning Trudeau’s every move so broadly and ad hominem that it’s been hard to pick out any narrative other than opposition for opposition’s sake. He’s presented no environmental policy to replace the Liberal’s Carbon Tax, even rejected Cap-and-Trade — a piece of Harper’s 2008 election platform — and has no foreign policy that significantly differs from Trudeau.

Claiming a hard line is needed in order to reign in the dispute with the People’s Republic of China, he deserves credit for deciding firmly to keep Huawei out of Canada’s 5G mobile network. But his opposition in this case is otherwise fairly limp. After calling for a “total reset” in relations with China, his plans to pull Canada’s funding for the Asian Infrastructure Investment Bank and file a complaint with the World Trade Organization — of which Canada has already filed three — he seems poised to make very little impact.

Scheer’s previous comments on immigration galvanized certain sections of the Tories’ base, but also remained generally confusing as he railed against a non-binding UN motion on refugees, exaggerating its powers. While he’s disavowed far-, alt-, and other less pleasant right-wing ideologies, he’s butted up against their talking points and public figures at times that could have easily been avoided.

Liberals, now recovering from a slump in the polls, and after watching both Ontario and Alberta go blue on a provincial level, are likely prepared to go out swinging on Scheer’s Conservatives and whatever connections can be made to white nationalism, Trump, and/or any kind of fear-inspiring ideology, no matter how tenuous. This was made clear by the release of footage showing Scheer’s comments as a fresh-faced Saskatchewan MP, arguing against gay marriage with a painfully simplistic metaphor. While the video didn’t have the impact Liberals likely hoped for, it only adds to lingering doubts by undecided voters waffling on going blue.

Despite the leader’s pledges to leave the laws on controversial topics like LGBTQ2+ rights and abortion tucked away, his opponents won’t let sleeping dogs lie — regardless of how many legs they have.

Singh captures attention, but hasn’t learned to hold it

Initially a seemingly fresh and interesting front runner of the New Democrats, Jagmeet Singh distinguished himself in his leadership race and handily won on the first ballot. Since then, he’s managed to maintain a media profile similar to Bigfoot, omnipresent but rarely visible for more than a few moments.

While a lot of his early absence from public discourse could be explained by his lack of a parliamentary seat, his win in BC’s Burnaby South by-election in February 2019 hasn’t been followed by much more fervour or coverage. He exists on the periphery of issues, but has yet to make an impact on the discourse in a way substantive enough to pull votes from his opponents.

It’s easy to forget that for the first time in history the NDP formed the official opposition two elections ago. In 2015, Thomas Mulcair was forced to watch the party’s surge in popularity melt away under the sunny ways of the Trudeau election machine. Mulcair’s failings during that election don’t rest with Singh, though he’s yet to find a way to recapture any of that momentum, including when it comes to fundraising.

Whatever reasoning compelled Canadians to swing towards the NDP in the last stretch of Harper’s reign seems to have left. Alberta’s brief flirtation with the New Democrats came to a swift end and polling data shows that Liberal flight is not as banner a time for the NDP recruitment as one might think.

His deft handling of a heckler, fashion sense, and progressive platform made Singh look like a potential alternative to those who’d been let down after Trudeau’s wave seemed to crash. This does not appear to be the case, as summer polling data shows former Liberal voters electing to go blue rather than orange. This, combined with a lack of candidates — at the end of August the party had only 175 candidates out of a possible 338 — isn’t projecting strength as voters consider their options.

Jack Layton held the reigns of power for the NDP from 2003 to 2011, yet Mulcair barely survived one election cycle as leader. Fast forward, and Singh’s position was being questioned even before he was able to win a seat in Burnaby. The party has yet to find a candidate they have enough confidence in to trust with the position long enough to win over voters.

Greens and the People

A post shared by Green Party of Canada (@greenpartyofcanadaofficial) on Mar 23, 2018 at 2:11pm PDT

The Greens have been making heartening progress. Elizabeth May’s party is used to being on the outside, but after winning a second federal seat in byelections in Nanaimo-Ladysmith, and the very recent surge in provincial popularity in PEI, the Green Party must feel like they’ve turned a corner.

Even with only two seats, if the Liberals manage to walk away from the election with a hung parliament, the Greens could find themselves in a position to wield an influence they’ve never had before.

On the other side of that coin is the People’s Party of Canada. Maxime Bernier may keep his seat in the election, but the rest of the PPC candidates will likely not fare so well. Even with only one seat, in the event of a Conservative minority government, Scheer could be forced to turn to his old colleague in tight votes.

The most irritating part is that, unless he’s unseated from parliament, Bernier cannot lose from his supporters’ perspective. Simply by establishing a riding association across the country and running a candidate, he’s exceeded expectations.

Bernier has made his career reversing his own fortunes — for both good and ill. After stepping into his father’s seat in Beauce, Quebec in 2006, and a few minor scandals and setbacks — after leaving a briefcase full of secret documents at his girlfriend’s house, a publisher posted a previously unseen chapter of Bernier’s book online in which he attacked the Tories’ supply management policy — he lost by less than 1% to Scheer for leadership of the Conservative Party.

His platform of deregulate first, deregulate more later (and meme preferences) pin him too far to the right in the view of the public. As well as too far for both small-c and big-C conservatives alike. What happens in October could either serve to enrich his infant party or ultimately break it.

Whoever leads the party that forms the next Government of Canada, the 10th largest economy by GDP in the world, is almost certainly on the list of names above. But in the modern Breakfast Club-esqe, ragtag detention crew of candidates Canada has somehow chosen to represent us, there’s a rich kid, a milkman, a mime, a hippy, and an edge lord.

Ultimately, please vote. But do it in your riding, for your riding, because you live there, invested in the community — there’s a very good chance these leaders are not.

The Canadian general election takes place on October 21, 2019. Find out how to vote here.