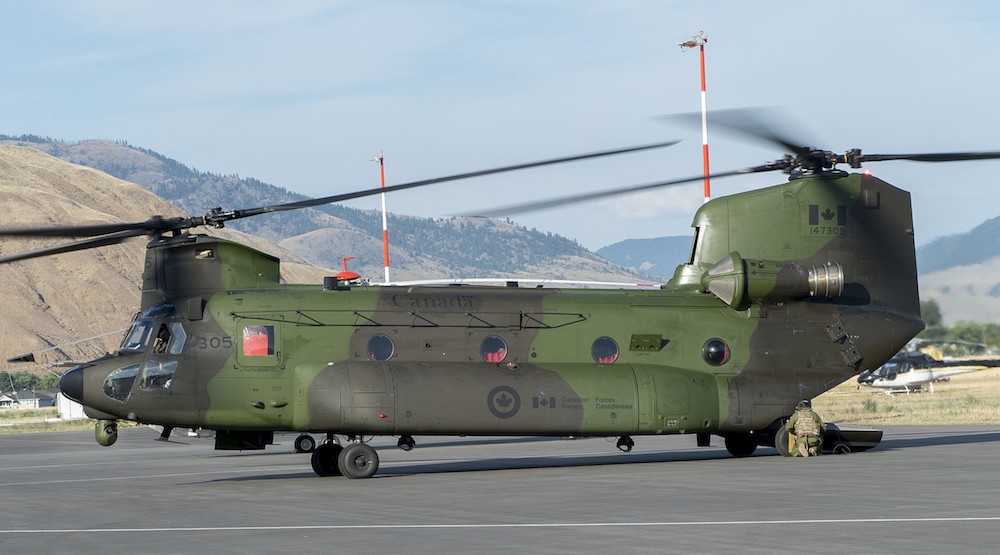 A Canadian Armed Forces Flight Engineer performs post landing procedures at Kamloops airport after a flight over the wildfires during Operation LENTUS 17-04 in Kamloops British Columbia, on 12 July 2017. (Canadian Forces)

A large emergency task force already on the front lines of BC wildfires are about to receive much-needed help from the Canadian Forces.

Another 225 soldiers will be deployed to the wildfire affected areas around Williams Lake, adding to the existing 150 soldiers that have been on the ground in the province for about a week.

This increases military numbers fighting the BC wildfires to 375.

The deployment is in response to a request for more military support from Mike Farnworth, the newly appointed Minister of Public Safety and Solicitor General.

“This is an unprecedented emergency, and it’s a welcome relief to get more boots on the ground from the Canadian Forces to support the enormous amount of provincial resources going into managing this event with the RCMP, wildfire fighters, EMBC and literally thousands of volunteers working as hard as they possibly can,” said Farnworth in a statement.

“I want to thank our Canadian Government and Canadian Forces for yet again stepping up and offering their support to help during our time of need.”

The soldiers will assist the RCMP in duties that include ground evacuation of distressed individuals, delivery of essential aid by land and by air, and help police maintain road checkpoints throughout the areas affected by the fires.

A number of air force aircraft are also providing support to the firefighting efforts, including one CC-130J Hercules, one CC-177 Globemaster, three CH-146 Griffon helicopters, and two CH-147F Chinook helicopters.

“The Canadian Armed Forces are part of the larger Government of Canada safety and security family. Like family we help out when and where we are needed,” said Rear Admiral Art McDonald, Commander of the Maritime Forces Pacific and Joint Task Force Pacific.

“We are proud to support our RCMP colleagues, and all of our federal and provincial partners, engaged in keeping Canadians safe during this time.”

Approximately 500 RCMP officers have been redeployed to the affected wildfire areas to assist with evacuations and prevent criminal activity.

As well, there are over 1,600 provincial wildfire firefighters, nearly 1,000 private contractors, and over 450 personnel from other Canadian provinces fighting the fires directly.

BC has also received foreign assistance, such as yesterday’s arrival of a team of 50 specialized wildfire personnel from Australia.