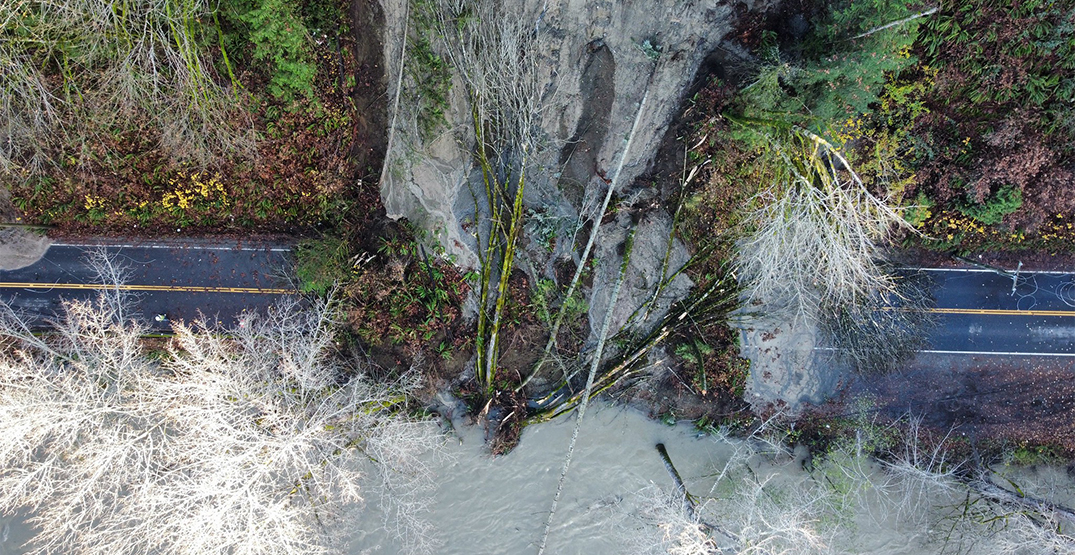 A mudslide across Allenby Road in the Cowichan Valley on Vancouver Island. (BC Ministry of Transportation/Flickr)

British Columbia officials are warning residents to prepare for more heavy rainfall this week while low-lying areas are still flooded and many highways remain closed.

“We’re not anywhere near normal,” Farnworth said. “We’ve had almost a dozen atmospheric rivers since mid-September … even a routine storm can cause rivers and streams to rise faster and potentially flood.”

Environment Canada has issued a rainfall warning for Metro Vancouver and the Fraser Valley about a “parade of storms” set to hit the region between Wednesday and Thursday. The highest rainfall amounts are forecast to hit the Valley and Howe Sound, where up to 80 millimetres are expected.

Although these storms are expected to be shorter and less intense than last weekend’s record-breaking atmospheric river, Environment Canada said the freezing level will rise above mountaintops on Thursday, which could send snowmelt to low-lying areas.

The River Forecast Centre has issued high streamflow advisories for all areas of the BC Coast.

Farnworth asked people not to travel unless absolutely necessary, and people with vacation plans to Whistler or the Gulf Islands are encouraged to evaluate whether fuel rationing rules may make road trips impractical.

People who do go out on the road are advised to pack emergency provisions, including water, food, blankets, and battery packs for cellphones.

There’s still water on the Sumas Prairie from last week’s flood, which Abbotsford Mayor Henry Braun said needs to be pumped out. The City advised residents not to use tap water due to contamination from flooding.

“Our focus today remains being prepared for the weather events coming over the next few days and ensuring we are as ready as we can be,” Braun said during a news conference Wednesday.

He expects another three feet to be added to the Fraser River dike before rain hits Thursday.

Highway 1 between Abbotsford and Chilliwack is scheduled to reopen on Thursday, but if flooding worsens with coming storms, that could change. The Coquihalla and Trans Canada highways remain closed east of Hope.