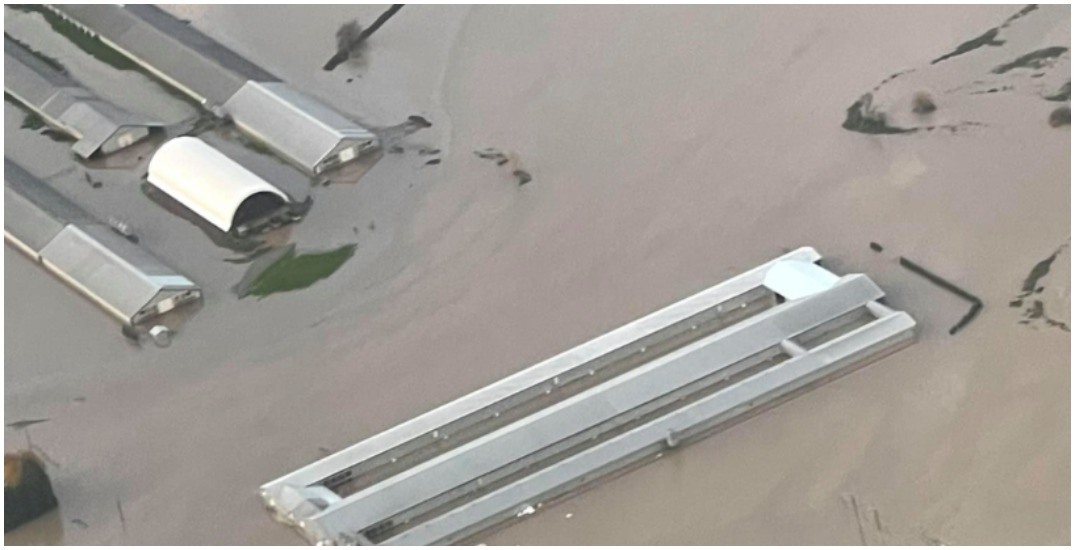 Cows being rescued by boat in Abbotsford / Brad Mueller / Aerial footage of farm flooding in Abbotsford, BC (Sophia Middleton)

After thousands of animals died during devastating flooding around British Columbia, national animal law organization Animal Justice is calling for urgent action to cap the number of animals that can be kept on farms. 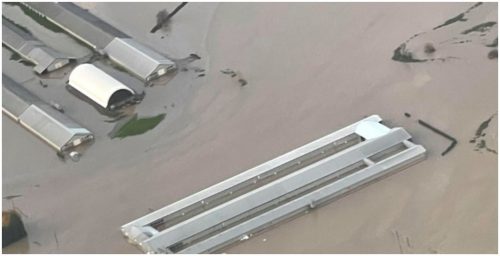 Aerial footage of farm flooding in Abbotsford, BC (Sophia Middleton)

In a release, the group says “limiting farm sizes will help ensure that all animals can realistically be evacuated in the face of emergencies such as the catastrophic flooding in the Fraser Valley.”

Numbers from the BC Chicken Marketing Board suggest the average meat chicken farm houses 50,000 birds.

According to Animal Justice, hundreds of thousands of farmed animals, including chickens, dairy cows, and veal calves, have likely died from drowning and hypothermia.

Right now, there is no limit on the number of animals that can be housed on farms in Canada.

“This leaves animals uniquely vulnerable to being left behind to suffer during emergencies, including floods, heat dome events, and barn fires. Although there have been some evacuation attempts of larger animals like dairy cows, private insurance and government disaster subsidy programs often cover financial losses that farmers incur from leaving the animals to die.”

My heart is broken for our agricultural producers impacted by flooding. Since Sunday Ministry staff & I have been communicating with folks & the conversations are devastating. Information being gathered is critical 4 response.Please message me if you info we may need. #bcpoli pic.twitter.com/XBAAdNI6JI

“Warehousing large numbers of animals inside factory farms is a recipe for mass suffering during a weather emergency,” said lawyer Camille Labchuk, executive director of Animal Justice. “There’s no realistic way to evacuate tens of thousands of chickens from a flooded barn. Farm sizes should be limited to the number of animals that can be evacuated, and emergency rescue plans should be a legal requirement.”

Animal Justice claims documents it obtained show that at least 651,000 chickens and other birds died on farms during the heat dome event earlier in the year when farms failed to ensure that cooling systems could keep pace with the extreme heat.

“Not only do factory farms confine animals in appalling conditions, but farming animals for food is a major contributor to climate change,” said Labchuk. “It is heartbreaking that these animals are also uniquely vulnerable to becoming the victims of climate change and extreme weather events.”

We are very grateful to our Canadian Military for assistance. These folks arrived today to help out at Oranya Chicken Farm in the Fraser Valley. #bcpoli #bcflood pic.twitter.com/9iVYib0XhK