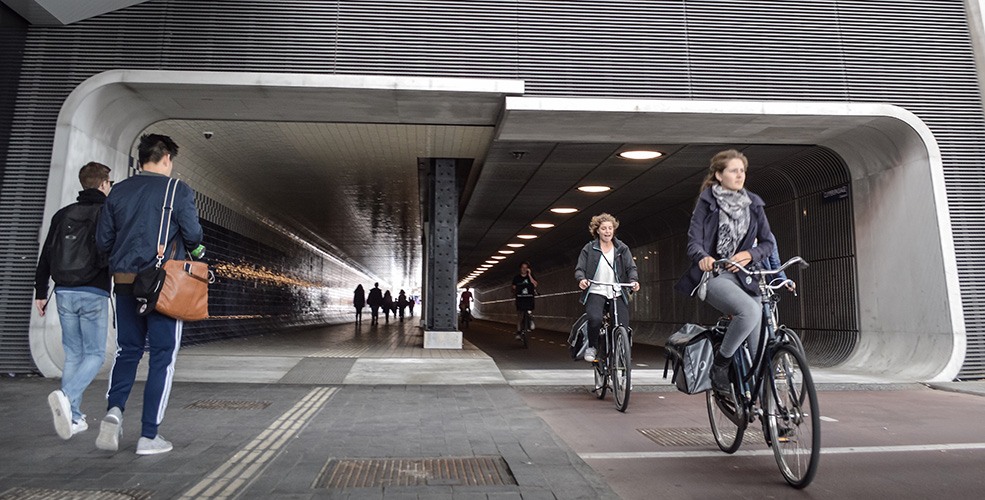 As our family boarded the train in Eindhoven to begin the third leg of our #CyclingAbroad adventure, the excitement level was palpable. After years of studying its story, admiring endless photos and videos, and dreaming of one day being a part of it, we were finally about to roll up to Amsterdam – the “City of Bikes.”

For those who love life on two wheels, Amsterdam undoubtedly sits near the top of their “to do” list. The appeal of joining the fray, riding upright along the city’s canals, cycle tracks, and serene streets is something unmatched anywhere else in the world.

The urban cycling utopia of which we’ve always dreamed 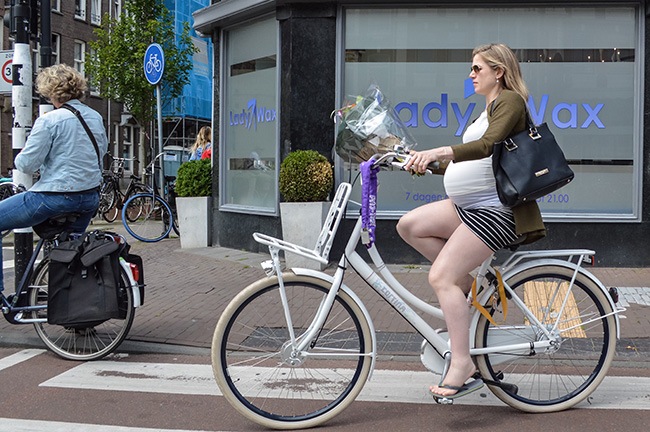 So when we arrived that afternoon – after settling into our flat in the Oud West – we ventured out to enjoy lunch on nearby Overtoom, and sit and people watch. The lively setting did not disappoint. Despite it being the middle of a workday, a steady stream of everyday citizens pedalled by the patio. And as the day wore on, the stream turned into to a torrent, until we finally had to force ourselves to put away the camera.

Needless to say, the next item on the agenda was to get ourselves some wheels, and begin experiencing Amsterdam’s famous cycle tracks for ourselves. Of course, sharing them with hundreds of practiced Dutch cyclists can be an intimidating feat, but we were up to the task. It wasn’t until our son, aged seven, exclaimed, “There are too many bikes!”, as we stood at stoplight in a crowd of two dozen cyclists, that it dawned on us: This is the urban cycling utopia of which we’ve always dreamed. 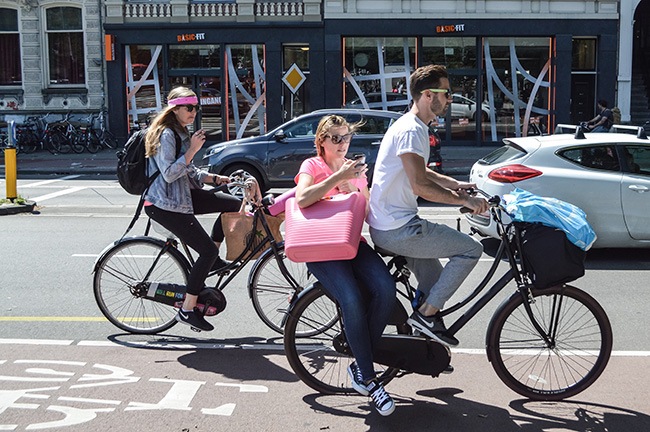 Amsterdam’s amazing transformation into a city for people has been repeatedly documented, as experts attempt to discern how – despite a post-war push for automobility, and subsequent decline in cycling numbers – it managed to hold onto its vibrant and versatile bike culture. Call it tenacity, a rebellious spirit, or just plain stubbornness, the city’s daily cyclists (who make up an astonishing 63% of the population) have weathered many a storm (including a German occupation, and cycling bans along Leidsestraat and Rijksmuseum), much to the admiration of the rest of the world.

For much of the 20th century, local authorities thought of cyclists as unruly children, in need of discipline in order to become responsible road users. The book Cycling Cities: The European Experience recounts how, in 1937, Amsterdam’s then Chief of Police – frustrated with their defiant and disobedient nature – dubbed them the city’s “problem children.”

Refusing to hand over their streets without a fight 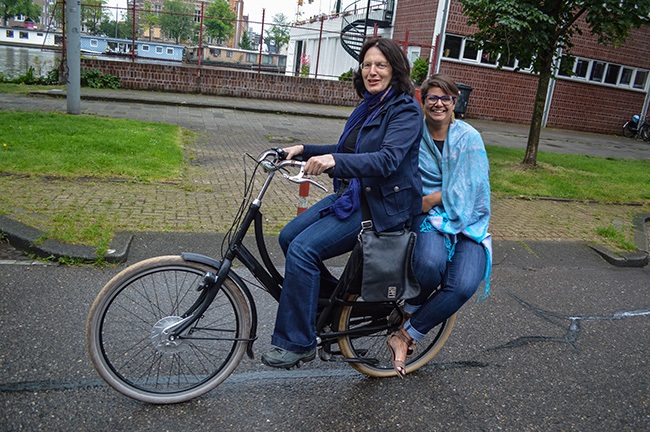 Dr. Ruth Oldenziel, the book’s co-author and Professor of American and European History at Eindhoven University of Technology, explains it took several decades until policymakers began taking cycling seriously as a mode of transportation.

“The City’s 1972 Traffic Plan was a turning point; not because of a pro-car policy, but rather one that advocated for traffic mixing, specifically only cars and public transit,” explains Oldenziel. “It implied the two modes would eventually ‘win out’ for road space.” However, by failing to mention cycling once in the entire plan – a mode seemingly in decline – engineers fuelled outrage, as Amsterdammers united and pushed back: refusing to hand over their streets to the automobile without a fight.

“Politicians began to feel pressure from the street,” Oldenziel recounts. Countless organizations such The Provos, Stop de Kindermoord (“stop child murder”), and Fietsersbond (“Cyclists’ Union”) coordinated their efforts, fought against the impending motorways and road widening projects, and began staging large-scale demonstrations. It was a powerful, combined force that could not be ignored, and in 1978, Amsterdam’s first genuine cycling strategy was adopted.

“A story of traffic calming rather than bike lanes” 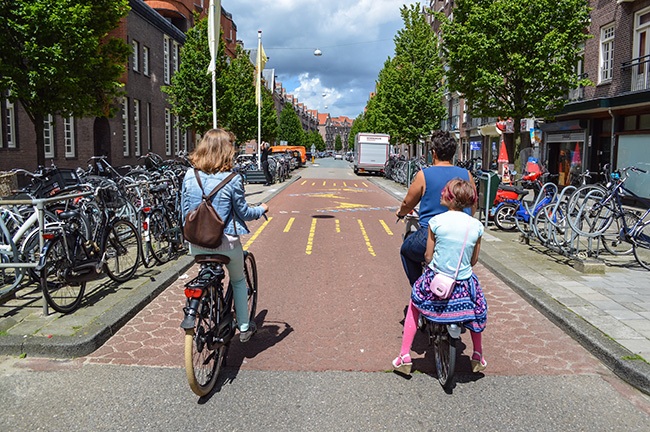 Looking at Amsterdam today, it would appear the 1978 policy equated to thousands of kilometres of bicycle-specific infrastructure, creating a seamless network across the entire city. But the truth is actually a little more complicated and counterintuitive.

“The story of Amsterdam is, in fact, one of traffic calming rather than bike lanes,” Oldenziel insists. Rather than focus on building physically separated cycle tracks on every street (which was, in part, pursued; just not to the extent of other Dutch cities), officials applied speed limit reductions, parking restrictions, through traffic limitations, and lane narrowings and removals. This created conditions where the bicycle was the single most convenient and comfortable way to get from A to B.

This differing strategy proved to be incredibly fruitful, and – as cycling flourished across the city – protected bike lanes were built in reaction to those increasing numbers, on streets where cyclists regularly outnumbered drivers and pedestrians.

“A strong experimental flow around cycling” 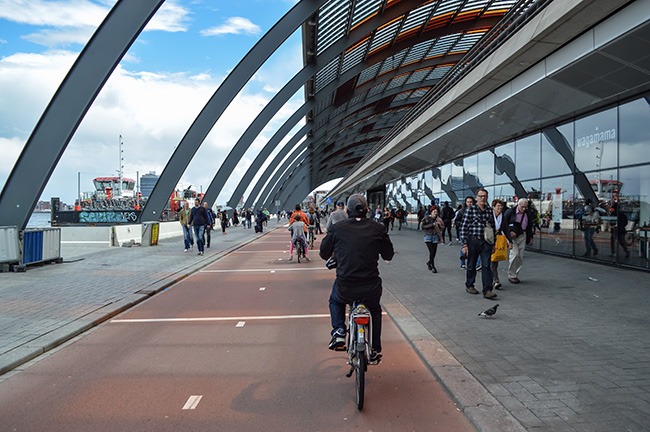 This trial-and-error approach has deep roots in the changes Amsterdam has seen over the years, and continues to play a role in its evolution into a 21st century city.

“There is a strong experimental flow in the city around cycling, and living labs are done to find new solutions in terms of space and experience,” explains Dr. Marco te Brömmelstroet, Associate Professor in Urban Planning at the University of Amsterdam. “Amsterdam seems to take up the challenge of being the world leader for sharing knowledge, but also the moral obligation to find out the best next steps.”

Engineers continue to experiment with pilot projects, such as turning off traffic lights at certain intersections, paving entire streets red (the designated Dutch bike lane colour), and establishing a car-free shared space behind Centraal Station. All three initiatives are designed to deal with conditions opposite to those we experienced earlier in Rotterdam: a huge (and growing) number of cyclists using facilities that are vastly underbuilt. Despite its utopia status, Amsterdam’s city centre still allocates just 11% of its streetscape to a mode of transportation that makes up 68% of all trips.

Advances in cycling at the expense of people walking 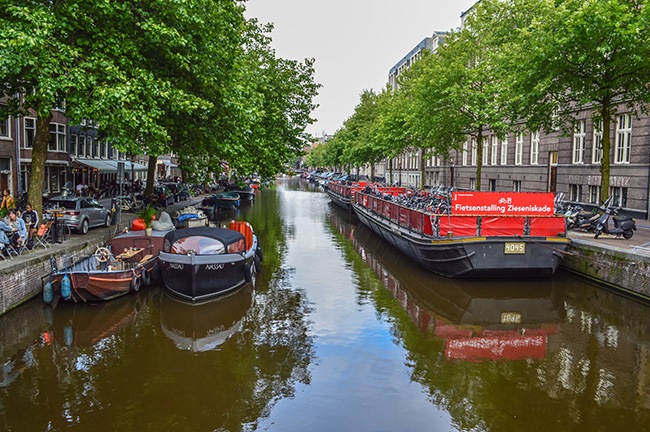 While doing better than most global cities for cycling, Amsterdam isn’t perfect by any stretch of the imagination. “Overall, modal split ranks in the middle,” Brömmelstroet points out. “In general, the pressure on space makes it relatively unpleasant in certain locations. Increased crowding and the size of the city make individualism sometimes strong, and reciprocity low. When motorized scooters came to the cycle paths they added a strong negative sensation to the mix.”

Walking certainly has not seen the gains that other modes of transportation have. Travelling along many of Amsterdam’s streets by foot, one quickly realizes many of the advances in cycling have been at the expense of the walking environment, with narrow sidewalks (often cannibalized by a cycle track) that are cluttered with rows of parked bicycles (a problem officials are trying to address with barges on the canals). It becomes a lot clearer why many citizens choose to travel by bike instead of foot: with far more inviting conditions; in The Netherlands, getting on a bike is like walking with wheels.

A cycling utopia by demand rather than design 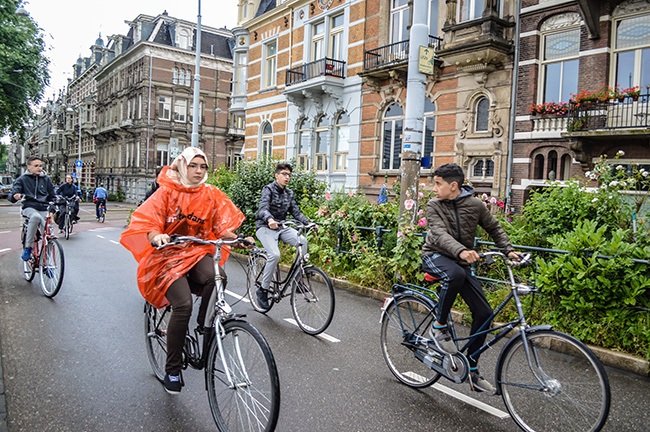 If revisiting the city’s tumultuous history teaches us anything, it’s that Amsterdam’s cycling utopia was a product of citizens demanding more from their politicians, rather than being designed from the top down. But to their credit, officials and academics are now looking closer at the city’s past and present, to take a more informed approach moving forward.

“2016 saw the beginning of fundamental research on walking and cycling on a scale never seen before,” Oldenziel reveals. “25 scholars are pursuing PhDs to provide evidence-based insights into how past planning has affected current urban mobility – like what happened on the streets. On an international level, it is truly revolutionary.”

As they did in the past, most street upgrades continue to be reactive rather than proactive, and officials can barely keep up with demand. Take the Weesperzijde fietsstraat, for example – an newly established “bike street” that connects Amstel Station with a residential community on the city’s east side. Without any changes to brick or mortar, it was designated “on paper” as a bike street in 2015, not because planners foresaw a need to connect those two nodes, but because the number of people cycling between them reached a critical mass. This can be attributed to a population that continually defies expectations, and pedals on, ignoring most hurdles they encounter along the way. 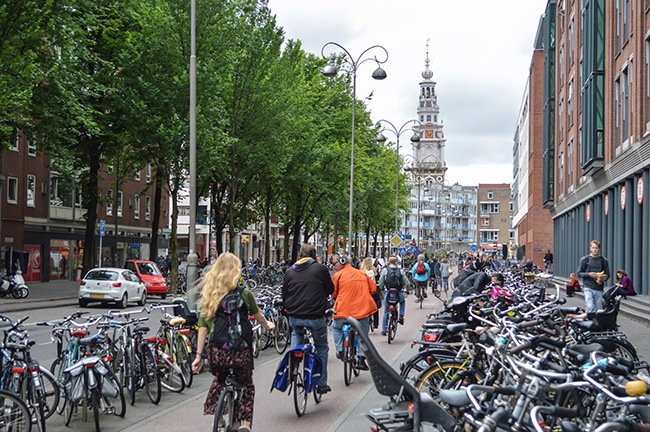 Ten days of touring the beautiful streets of Amsterdam, going with the flow, and enjoying a “super normal” bike culture is an experience we won’t forget anytime soon. But what will we miss most about it? The quiet. Never before have we visited a city whose streets are paradoxically so serene, and yet so full of life.

Upon returning to Vancouver, we longed for our quiet block of five-storey row houses near Vondelpark, where the loudest noise we heard was the occasional ringing of a chain lock, or well-worn tires rolling over loose cobblestones. This observation is not isolated to visitors.

Oldenziel, who has lived in Amsterdam all her life, happily welcomes the changes to her home: “For cycling, it has gotten better and better. In my youth, and as a student, the city was a stinking, clogged mess. Now I am proud of the city and really enjoy my rides. Where once honking horns jammed the streets, silent cyclists now dominate.”

Modacity’s #CyclingAbroad adventure was made possible through the generous support of our friends at Daily Hive, Urban Systems Ltd., and Two Wheel Gear. To view the full collection of photographs taken by the authors in Amsterdam, please click here.