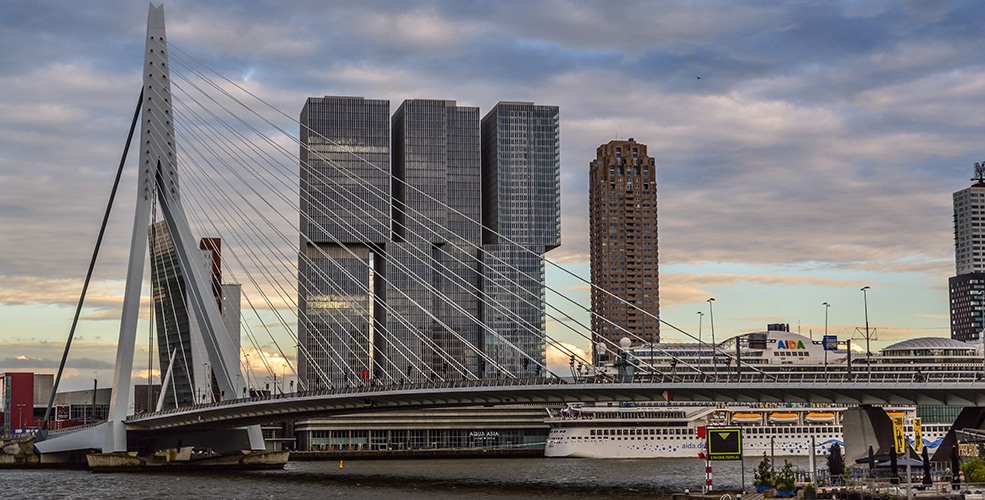 It doesn’t matter how much time you spend drooling over European bicycle culture on a computer screen, nothing fully prepares you for that first step outside a Dutch train station. Trust us, we’ve wasted countless hours poring over Cycle Chic sites, Bicycle Dutch blog posts, and books such as “In the City of Bikes”.

But when we first emerged from Rotterdam Centraal Station, our eyes bleary from 24 hours of air and train travel, it took some time to convince ourselves they weren’t playing tricks on us. 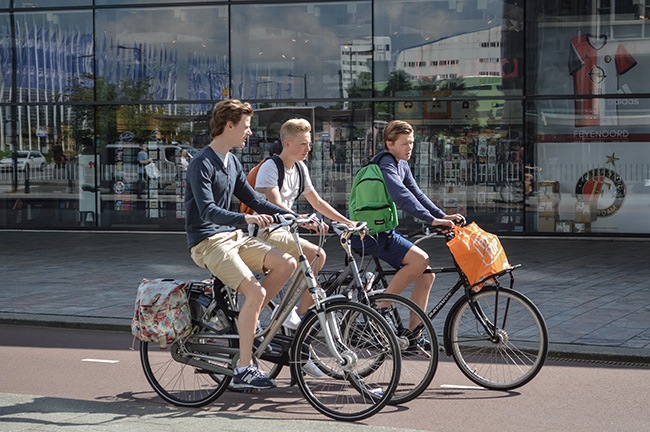 Despite the constant drizzle, a steady stream of cyclists moved in every which way, along three different cycle tracks adjacent to the station. And they hardly resembled the type of people we see on bikes in Vancouver.

Dressed in their regular attire, perched on battered, upright frames (often two, and sometimes three abreast), there wasn’t a single helmet to be seen. Some casually carried a passenger on their rear rack; others had a child on their handlebars. We even spotted a man pedaling along with an umbrella in his right hand, with an effortlessness that had us giddy with excitement. 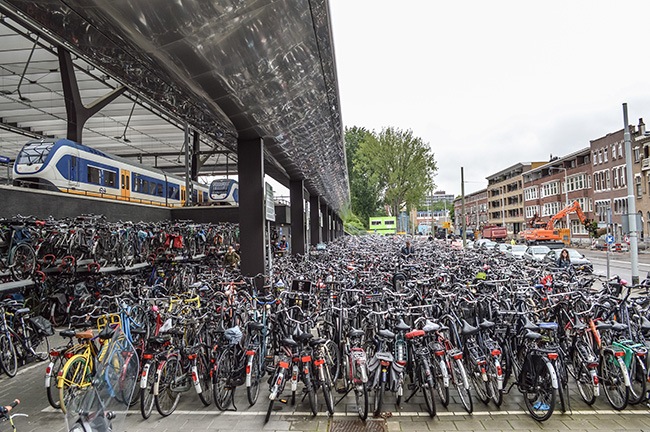 Once we managed to get our bearings, we rolled our suitcases through a futuristic walking and cycling tunnel that took us underneath the train tracks, and were greeted by another unexpected and incredible sight: An ocean of thousands upon thousands of bicycles, as far as the eye could see, packed into a plaza next to the platforms; a testament to the unique way Dutch planners have integrated bike and train travel.

We later learned this was, in fact, a secondary overflow area for the main bike parking facility: an underground structure with 5,190 spaces built below Centraal Station in 2013.

Levelled by the Luftwaffe, and forced to start over

We did, admittedly, arrive in Rotterdam with a somewhat lowered set of expectations. We specifically chose it as the first locale of our five-city tour of The Netherlands because in our planning and research we discovered that – with a mode share of 25% (vs. 40% in Amsterdam or 60% in Groningen) – it was one of the least bike-friendly cities in the entire country; although that was for a fairly good reason.

Before the Second World War, Rotterdam was a typically fine-grained Dutch city, with narrow streets, low-rise buildings, and historic canals. But on May 14, 1940, in an (ultimately successful) attempt to shock the Dutch government into surrender, the German air force bombarded the city, killing over 900 people, making another 85,000 homeless;  successfully destroying all but 12 buildings within the city centre.

Modernizing the city by untying its problematic “knots”

Post-war rebuilding efforts were fast and furious, professed by planners, politicians, and city officials as a once-in-a-lifetime opportunity to modernize Rotterdam, untie its problematic “knots”, and redesign it around society’s newly mass-produced panacea of economic prosperity and personal mobility: the private automobile.

Wide, multi-lane boulevards and high-rise buildings were prescribed and built, touted by transportation engineers as a matter of progress, on a scale and scope far more familiar to North American cities than anything found in Europe at the time.

Utilizing a “blank canvas” to reinvent itself as a global city 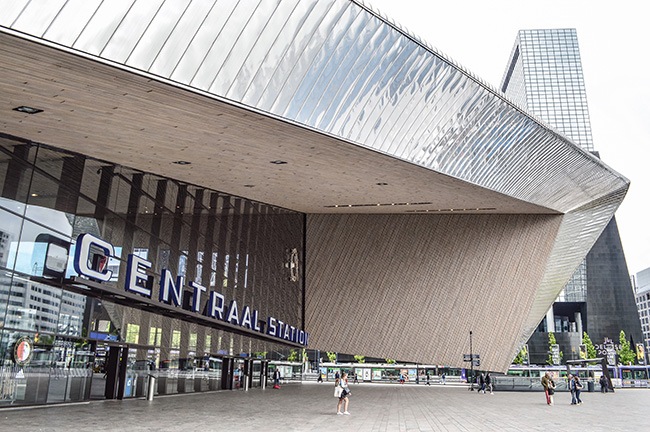 In some ways, this “blank canvas” proved fortuitous, allowing Rotterdam to reinvent itself as a global port (Europe’s largest) and business hub (with many multi-national shipping, pharmaceutical, banking, energy, and chemical company headquarters). 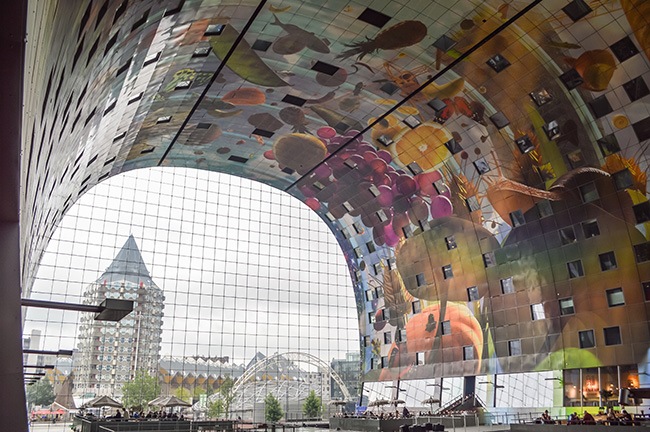 Over the years, this absence of context ended up being both a blessing and a curse. While some of these experiments shaped a somewhat spectacular skyline, they failed its residents at the most basic level:

“While Rotterdam is known for its cutting-edge architecture, planners must also remember the city at eye level – the ground floor, where life happens and people experience the city and those around them,” suggests Meredith Glaser, a now Amsterdam-based Urban Planner and Mobility Consultant, who lived in Rotterdam for two years.

“Take De Rotterdam for example, which is a pretty amazing building. But the ground floor, which is basically one huge foyer, is ultimately disappointing and uninspiring.“ 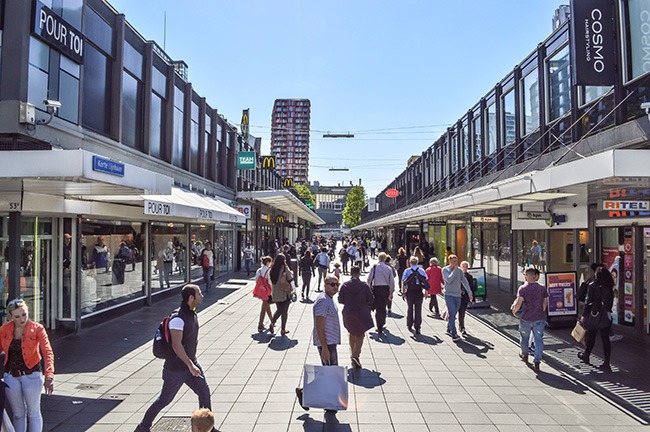 Although the intentions behind it were completely misguided, the street itself was wildly successful, laying the groundwork for subsequent pedestrianization of the city centre, and providing the inspiration for many similar car-free shopping streets in cities around the world.

The rhetoric and reality of the automobile age 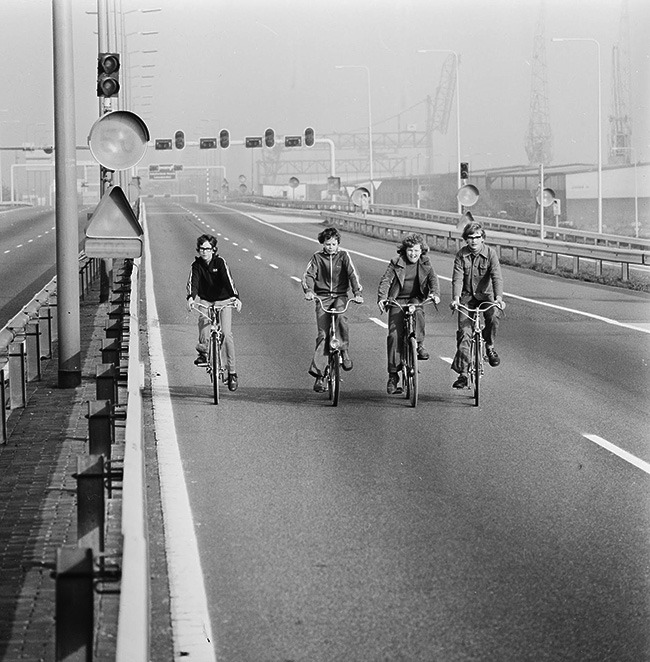 In other ways, this modernization of Rotterdam into a “very American” city proved utterly disastrous, and within two decades, many of its citizens began to recognize that the reality of the automobile age fell far short of the bill of goods they were sold.

Growing congestion, decreased air quality, plummeting cycling rates, and a plague of road fatalities (particularly among children) – all seen as the “cost of commerce” in North America – were enough for them to demand a change from elected officials.

Around that time, OPEC announced The Netherlands was one of five countries targeted by an oil embargo, resulting in an abrupt fuel shortage, and compelling countless citizens to reevaluate their relationship with their cars. A sudden spike in fuel prices forced many to dust off their bicycles (producing a collective desire for safer streets), a shift reinforced by ensuing local policies, such as “car-free” Sundays.

There was one additional factor at play: “On the surface, Rotterdam leadership wanted to compete better with other Dutch cities,” explains Transportation Reporter and Streetsblog Chicago Deputy Editor Steven Vance, who called Rotterdam home for three months this summer. “In order to successfully compete, they were forced to advance their own bicycle infrastructure.”

Retrofitting its streets to a more human scale 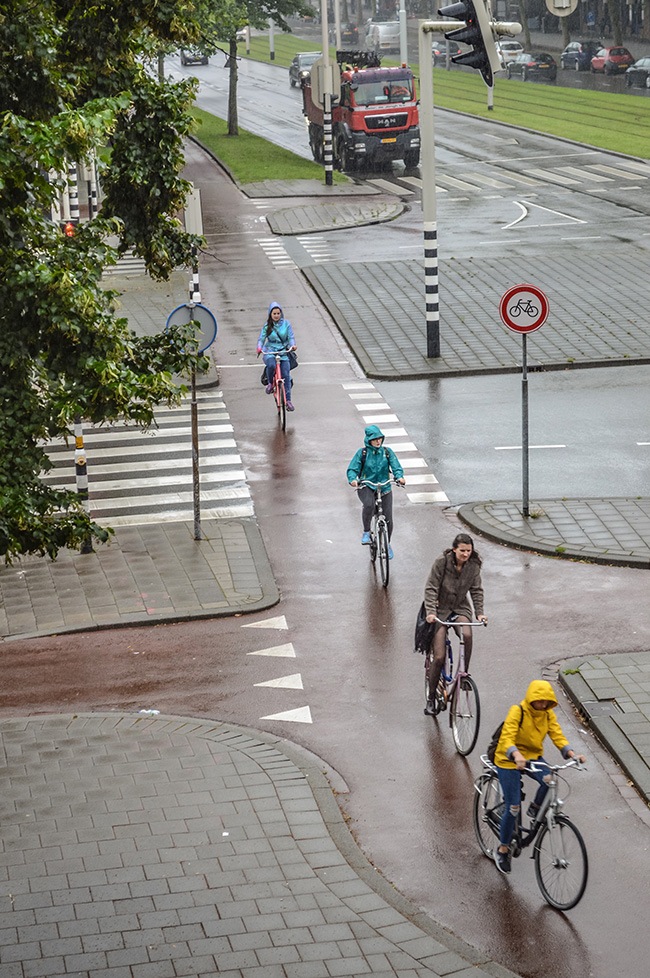 Thus began three decades of reversing the damage done, and retrofitting streets designed “according to the demands of modern fast traffic” to a more human scale.

Wide grass boulevards were established down the centre of many arterial roads, and integrated into a fast, frequent tramway system that would never get stuck in traffic. Sidewalks were widened, and generous, one-way cycle tracks were built on both sides of streets, completely separating cyclists from automobiles.

By building complete streets as public policy, Rotterdam reversed the problems of traffic, air quality, public health, and road deaths, and every one of its citizens were the better for it. 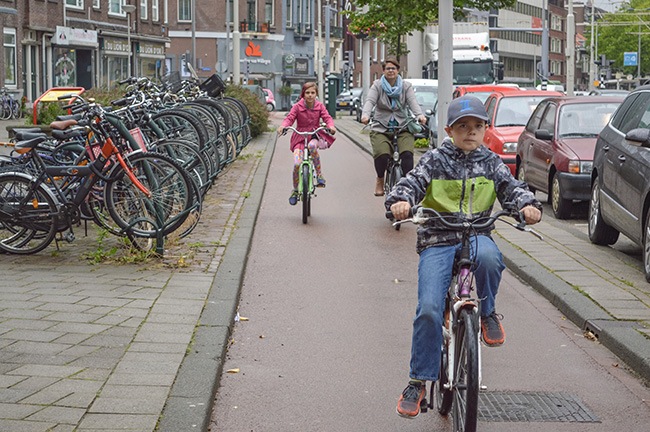 For our part, after just one day of pleasantly pedalling side-by-side with the kids around the streets of Rotterdam, we began to wonder: “If this truly is the worst The Netherlands has to offer, what did we have to look forward to later in our travels?”

Coming from a part of the world where cycling for transportation continually forces us to choose between convenience and comfort – think of the out-of-the-way neighbourhood greenway versus rubbing shoulders with fast-moving cars (often just to get to the grocery store) – we found riding as a family in Rotterdam remarkably relaxed, intuitive, and seamless. Within hours, we realized we no longer had to check the bike map, because there was a safe, separated space for cycling on virtually every single street we wanted to use.

In general, these favourable conditions are a (less-than-ideal) consequence of a lower number of cyclists using facilities that are generally overbuilt: “I love riding in Rotterdam because the paths are very wide; and compared to Amsterdam, fewer people are on them,” claims Glaser. “The pace is slower too. You can always park right in front of your destination!” 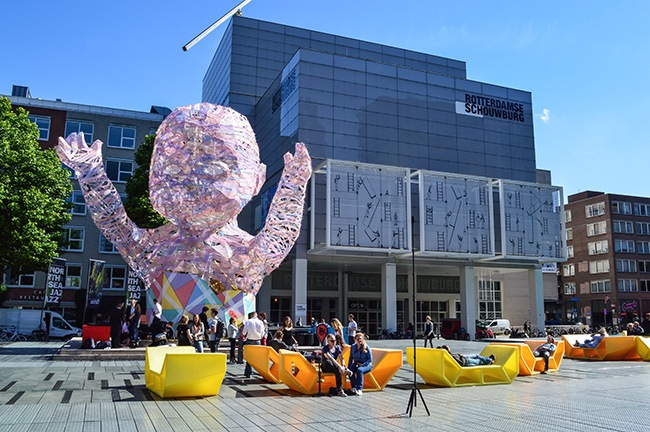 One thing’s for certain: Rotterdam’s dramatic story of destruction, reconstruction, and continual reinvention serves as an inspiring case study for urbanists looking to counter those cynics who claim: “We could never do that in our city.”

In particular, it reminds North Americans that our streets are not set in stone, nor are they frozen in time, and even the most car-centric city can be adapted to walking, cycling, and public transit within a relatively short time period.

Even as it marks the 75th anniversary of the Blitz by the Luftwaffe, Rotterdammers recognize their rebuilding efforts will never truly be complete.

“Rotterdam’s traumatic destruction and rebuilding process has become an identity of the city; and those who live, and play there,” says Glaser. “It is very much a work-in-progress; never actually finished, and constantly refining and redesigning its streets.” 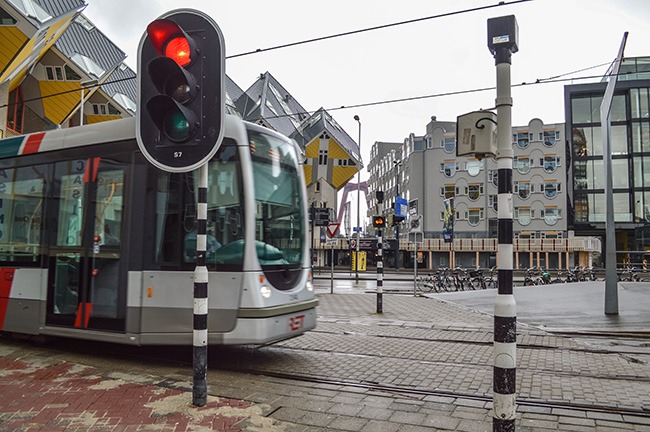 “Rotterdam, like nearly every one of the 30 Dutch cities I visited, is in a constant state of renewal,” concurs Vance. “Not everything everywhere, but a number of ongoing projects that drastically alter the arrangement of people and vehicles. The Dutch rebuild parts of their cities often and quickly. It’s mind blowing.”

Modacity’s #CyclingAbroad adventure was made possible through the generous support of our friends at Daily Hive, Urban Systems Ltd., and Two Wheel Gear. To view the full collection of photographs taken by the authors in Rotterdam, please click here.