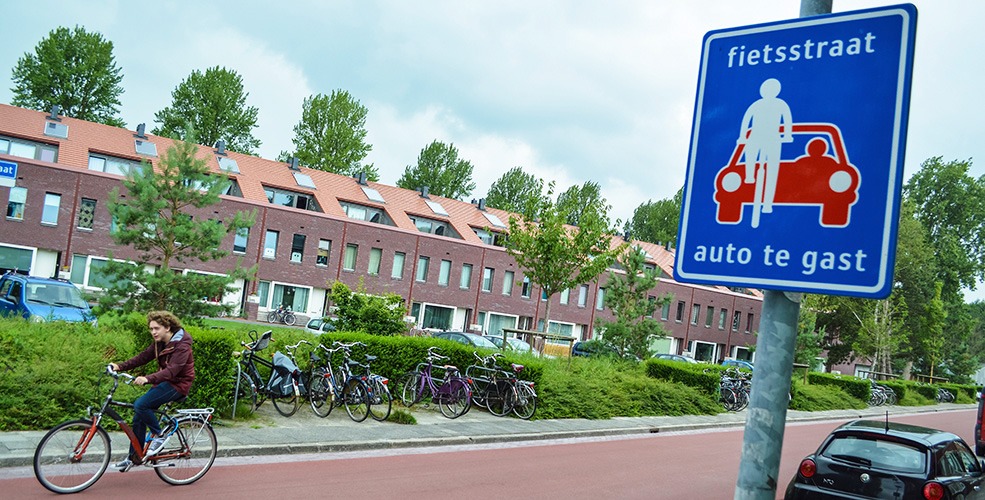 The fifth and final stop on our #CyclingAbroad tour of The Netherlands was Groningen, a small northeast city of 200,000, where two-thirds of trips in the centre are made by bicycle, giving it the well-deserved title of “The World’s Cycling City.”

The authorities were rather enthusiastic about our visit, perhaps because – due to their size and location – they’re often overlooked in discussions around the world’s best cycling cities. They definitely rolled out the red carpet, welcoming “gezonde stad goeroes” (“healthy city gurus”) Modacity on Twitter, arranging an interview with a local newspaper, and scheduling an infrastructure tour with city officials. 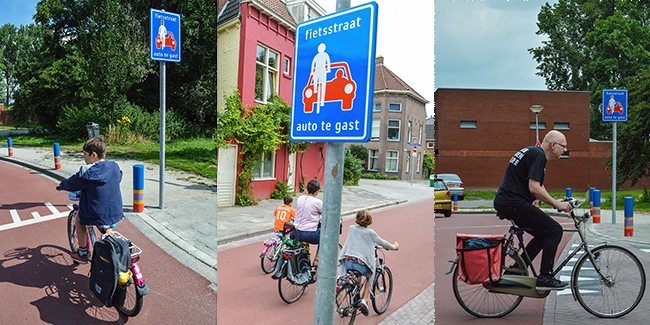 During the latter, we learned about unique ways local planners were addressing a problem many cities would love to have: dealing with the vast number of cyclists during peak hours, creating congestion in a number of parts of the city, particularly streets between the centre and the University of Groningen’s northern campus.

These measures include a series of “smart routes“: direct, convenient cycle paths designed to get students and staff to university in 15 minutes, without having to make a single stop. Groningen is also one of the first cities to attempt to “solve traffic situations with eye contact,” first piloting; then expanding a counterintuitive, but highly effective four-way green light for cyclists at 17 different intersections.

However, with as many as 12,000 cyclists travelling certain corridors on a given day, Groningen officials were being forced to “think outside the lane,” and experiment with the notion of handing entire streets over to the bike as a mode of transport.

The fietstraat (Dutch for “bike street”) is not a new solution, nor is it a particularly innovative one. Having been utilized since the mid-’90s, they are fairly common across The Netherlands on streets within residential areas, where cyclists already outnumber cars. They are characterized by a red pavement treatment, prominent branding (on both the street and on road signs), a reduction in the availability of parking, and traffic calming measures that dissuade motor vehicle through traffic. These four features combine to make it abundantly clear that bikes are the main users of the street, and that drivers – as guests – should adjust their behavior to suit. 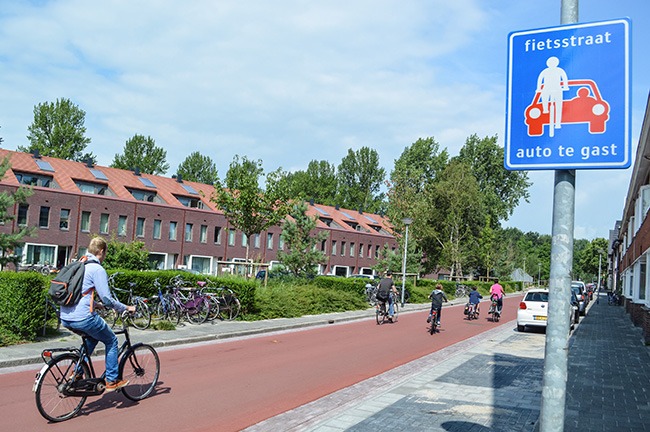 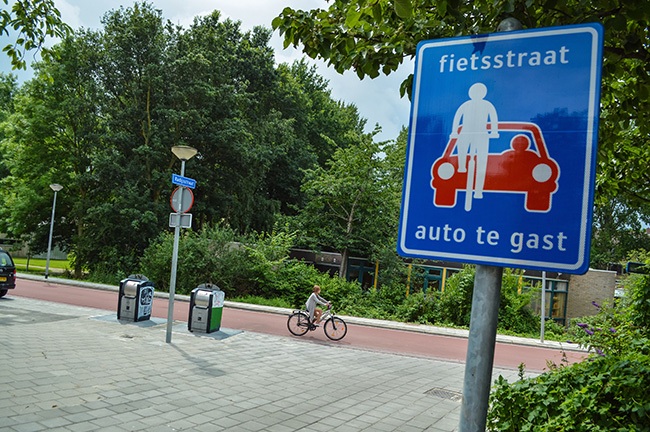 It is important to note these fietstraats cannot be implemented on a piecemeal basis. They must be designed within the context of a complete network, including separated tracks when the speed and volume of cars reaches a certain threshold. The Dutch Design Manual clearly defines those levels, along with five requirements for a successful fietstraat: continuity, directness, safety, comfort, and attractiveness.

As part of their “smart routes” program, Groningen recently cut the ribbon on its first fietstraat – on Bessemoerstraat, a residential street where bikes already outnumber cars by a ratio of 3:1 – in anticipation of the start of the school year. 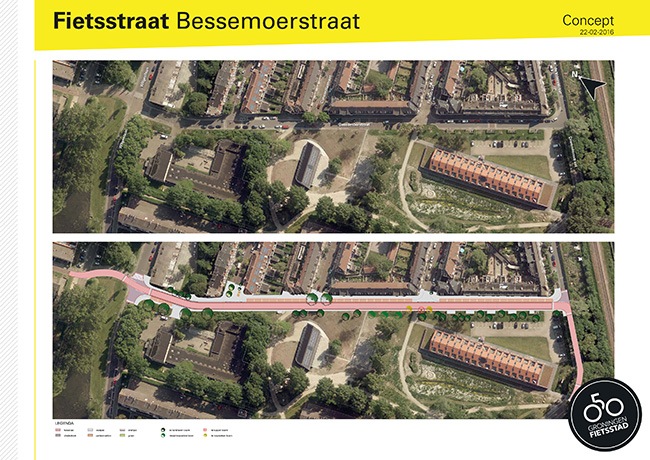 “The cyclist is key, the car is a guest,” says project consultant Gerrit Dorgelo. “Most roads are designed for cars, and also make cyclists use the road. In Bessemoerstraat, the cyclists ride in the middle of the road. It is therefore difficult for the driver to overtake cyclists, and they get the idea: I have to adapt myself and I am a guest.“

From our perspective, these fietstraats represent the inevitable next step in Vancouver’s existing network of neighbourhood greenways. These corridors, such as the 10th Avenue Bikeway, were installed on residential side streets in the ’90s, as a low cost, low controversy grid of bike infrastructure, using a combination of reduced speeds, basic signage, and controlled crossings at major intersections. 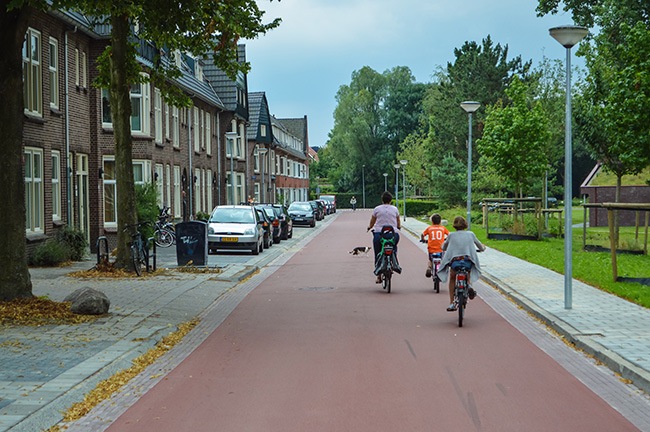 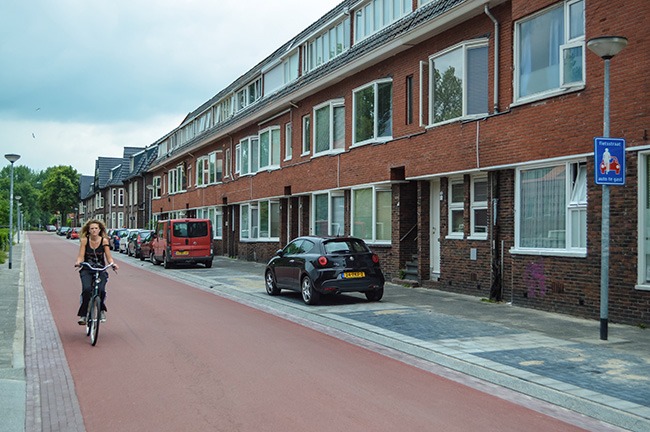 They are long overdue for an upgrade, now seeing as many as 500,000 cyclists each and every year (in the case of 10th Avenue), while remaining inaccessible to all ages and abilities. The City of Vancouver would be wise to take a page from Groningen’s book, and look at improving the pavement treatments, branding, and parking and traffic calming policies that would truly prioritize bikes on these routes.

But creating quick, convenient routes to work and school is just one piece of the puzzle in building a successful cycling city. Our visit to Groningen only reinforced that belief: planners must also prioritize mass cycling numbers beyond the humble commuter. From protected bike lanes on busy high streets, to road diets and traffic calming, cities must shape their infrastructure and policy to encourage shorter, more plentiful trips to shops, restaurants, and extra-curricular activities.

Which is why building complete streets on shopping corridors such as Commercial Drive is as just important, if not more so. But that’s another topic for another day.

Our #CyclingAbroad adventure has finally come to a close, but we’ll be producing a wide array of content for Daily Hive – including additional articles, photographs, and short films – in the coming weeks. Stay tuned on Facebook, Twitter, and Instagram.