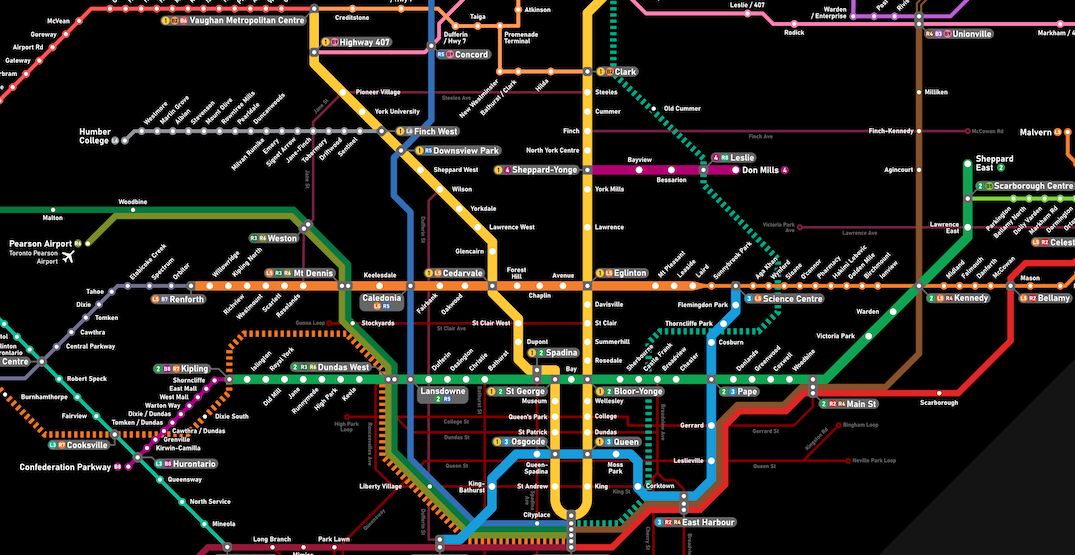 New transportation projects are underway all around Toronto, from the Eglinton Crosstown LRT to the Ontario Line subway, and by the year 2030, the city’s transit system will be almost unrecognizable.

Thankfully for transit riders, there’s now a futuristic map of what we can expect eight years down the line. Created by August Pantitlán, a student at X University, formerly Ryerson University, the map details not only what the integrated rapid transit system will look like in Toronto in 2030 but the entire GTA as well.

The map illustrates existing bus, LRT, train, and subway rapid transit routes in the GTA as well as upcoming projects expected to be complete within the next decade, like the Hurontario LRT, the Eglinton Crosstown, the Scarborough Subway Extension, the Ontario Line, the Finch West LRT, and the Hamilton LRT.

final version of my Toronto-area integrated rapid transit diagram that includes everything that is existing, under construction or in advanced planning with construction start expected in the next few years

thx to everyone who gave feedback and tips to help refine it 🙂 pic.twitter.com/m4jYArYZNq

Pantitlán initially created the map as part of a competition held by Toronto-based Youtube channel RMTransit but has continued to update it in hopes of providing GTA travellers with a more comprehensive and easily understandable diagram.

“Currently, there isn’t really a unified transit map for the GTA,” Pantitlán told Daily Hive. “Agencies like the TTC and GO don’t always incorporate other connecting systems within their diagrams.

“There’s also the issue of fragmented wayfinding — GO train lines are named by [the] terminal or their general route, TTC lines are numbered, and the VIVA system is colour-coded. So, when creating a unified map, I also wanted to create a unified wayfinding system that integrates every transit service in an intuitive and clear way, with lettered prefixes to indicate mode — regional train, subway, light rail, ferry, bus rapid transit — and a number. Overall, this allows riders to easily trace their route across the region, from Barrie to Niagara, or Kitchener to Bowmanville.”

Out of all the planned transportation upgrades coming to the GTA, Pantitlán noted the GO Expansion program as one of the most impactful.

“It is certainly the one project that, in my view, is most transformative for the Toronto area,” Pantitlán said. “The conversion of five GO train lines into [an] all-day electric urban rail that operates every 15 minutes or better will bring high-capacity, fast rapid transit across the region… It shows how we are able to build world-class transit by simply optimizing and upgrading the infrastructure we already have.”