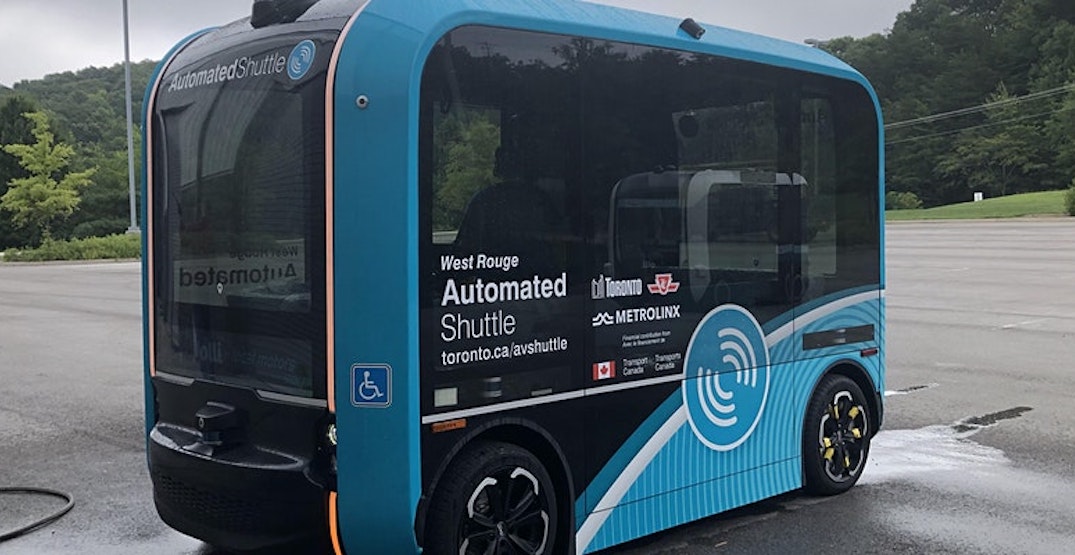 The City of Toronto has suspended its trial of a self-driving bus after a similar one crashed into a tree in Whitby, critically injuring the onboard attendant.

The City of Toronto, in partnership with the TTC and Metrolinx, had begun testing of the West Rouge Automated Shuttle — a self-driving shuttle bus running in a loop from the Rouge Hill GO Station. Although the shuttle had not yet begun accepting passengers, the City has decided to pause the trial while an investigation into the Whitby crash is ongoing.

“The temporary service in Toronto is trialing a newer generation of the same automated shuttle used in the Whitby Autonomous Vehicle Electric Shuttle Project and which is owned by the same service supplier,” Senior Project Manager Jennifer Niece wrote in an email update. “Due to this similarity, the West Rouge Automated Shuttle Trial has been put on hold until further notice.”

On December 16, the Whitby Autonomous Vehicle Electric (WAVE) drove head-on into a tree near Victoria Street west and Watson Street West. How the bus left the roadway has not yet been made clear.

The small, battery-powered shuttle bus travelled a six-km route beginning and ending at the Whitby GO Station. Interestingly, the WAVE maxes out at 20 km/h while in autonomous mode, but the onboard attendant can take over manually if necessary.

The Durham Regional Police Collision Investigation Unit is currently conducting an investigation into the crash.