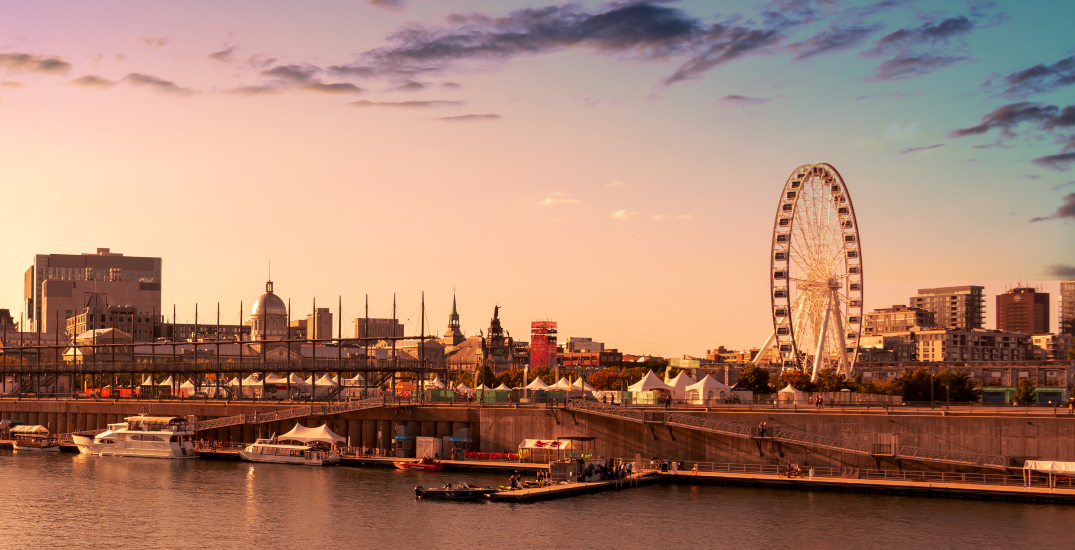 We’re already bidding farewell to August and welcoming in the last official month of summer (sigh).

But thankfully, there are a bunch of things worth checking out in Montreal all week as we say goodbye/hello.

At least it’s not as dangerously hot as the past two weeks, right?

Montreal’s Botanical Garden will shine bright with hundreds of illuminated lanterns as the Gardens of Light returns to the city this week.

KSF is right at Rapids Park in Lasalle and they offer surfboards, paddleboards, and kayaks as well as all the gear needed to tackle the water.

As the summer winds down, why not enjoy the Lachine Canal and the Saint Lawrence River by standing on top of it?

When: From now until September 18
Time: 9 am – 7 pm
Where: 7770 boulevard Lasalle
Price: Varies per selection

The exhibition, presented by Holt Renfrew Ogilvy, is a historical showcase of “creations of the first decade of the haute couture house of Dior, created by the famous French couturier Christian Dior.”

The Wanderer is Éco-Odyssée’s unique labyrinth that has been in use since 2008. Participants are given an adventure map and their choice of paddleboat, paddleboard, or canoe.

What follows is a 2-hour adventure through the wild country of Wakefield, Quebec.

Don’t be surprised if you run into a beaver or white-tailed deer as the park shares its grounds with the local habitat of dozens of creatures.

Located in the old RCA building in St. Henri, the museum was introduced in 1992 as an homage to Emile Berliner, the inventor of the phonograph record disc. The German pioneer opened the Berliner Gramophone Co. headquarters in the Montreal building back in 1909.

Its impressive collection holds over 30,000 pieces of technology, including gramophones, turntables, televisions, discs, and radios.

Just steps away from the Atwater Market, this patio doesn’t just offer a view of the water, it’s actually ON the water. The floating terrace bills itself as “the perfect spot to get in the nautical spirit for a 5 à 7”.

Giant puppets are taking over Verdun this weekend.

And the shows are free (you just need to register your spot, right here.)

When: Fridays and Saturdays until September 11
Time: 10 am – 4 pm
Where: Promenade Wellington
Price: Free

With a name like that, you better believe that Super Aqua Club has it all. The park is headlined by the Tornado, a water slide higher than a seven-story building, and the Wipe Zone, a giant obstacle course that tries to knock you into the water.

With the heatwave looming, this week might be the perfect time to tackle the aqua club.

The super park also has a lazy river, a private beach, and a kids’ area.

Twenty of the park’s 24 attractions are open, and the park has “implemented new hygiene, cleaning, and disinfection measures that meet those recommended by the National Institute of Public Health to ensure the safety of our visitors and employees.”

There are just days left to see the nearly 110 paintings, sculptures and works on paper by Jean Paul Riopelle, presented at the Montreal Museum of Fine Arts (MMFA).

The REM at The Canadian Railway Museum (Exporail)

Did you know the largest railway museum is just outside of Montreal?

This weekend, the city’s new REM light rail train will be hosting an exclusive showcase of the interior of the trains before they launch.

Exporail also fetures a collection of 188 vehicles and trains, the largest exhibit of its kind in Canada.

The Notre-Dame Basilica announced the return of AURA, one of the Old Port’s most popular events. The immersive light show is presented by Moment Factory, and a few new features have been added.

The updated version of the spectacle celebrates the materials and colours of Notre-Dame. The new musical accompaniment has also been added for the purpose of showing off the Basilica’s 7,000 pipe Casavant organ, which has been in operation since 1891.

Montreal is home to the Barbie Expo, the largest permanent collection of Barbie dolls in the world.

Guests have the chance to see and snap pics of over 1,000 one-of-a-kind Barbie dolls, all dressed by the city’s leading fashion designers.

Musee Grevin is Montreal’s very own version of Madame Tussaud’s in London. A wax museum hidden inside Centre Eaton, Musee Grevin, will have you snapping pics of all your favourite celebrities.

Slumbering giants have awoken at the top of Mont Tremblant, and a mountainside tour will allow you to go search for them.

Featuring a night-time walk that’s lit up by Quebec’s Moment Factory, the tree is full of sights and sounds that will transport you to a mythical adventure.

After being closed for more than two years for renovations (and a pandemic), the Biodôme de Montréal is finally reopened.

Using some elements from Biodôme’s original 1976 design, guests can now observe the birds in the Tropical Rainforest from treetop level, enter a beaver lodge, and really experience what subpolar cold feels like – just like the penguins.

Walk through replicas of four ecosystems found in the Americas without even leaving the island.

Channel your inner Jack Sparrow and climb through giant pirate ships in Old Montreal as part of a high-flying obstacle course.

When: Every day until September
Time: 10 am – 6 pm
Where: Place des Vestiges, Old Montreal
Price: $19 to $54 per person, depending on the type of swashbuckling adventure you choose.

Parc Safari is up and running for the spring and summer season for anyone looking to get off-island and check out a slew of exotic animals, including zebras, elephants, big cats, hyenas, deer, and more.

They also have live shows and amusement park rides.

Boozy brunches and endless nights are among the top attractions at this popular patio that sits on the Saint Lawrence River in Old Port. Incredible views of the Old Port are the cherry on top!

Come for the bistro. Stay for the club.

Take a zip across Old Montreal.

For a smooth $19.99, zip across the Old Port and take in seriously breathtaking views of the Montreal skyline.

We could all use some laughter these days, and a new comedy festival might do just the trick for Montrealers looking to have a few chuckles.

The Montreal Comedy Series kicked off this past Friday and will keep rolling (maybe even on the floor) until September 4.

Yes, the festival will include 125 comedians spread out across 26 shows. Four of which take place on a rooftop.