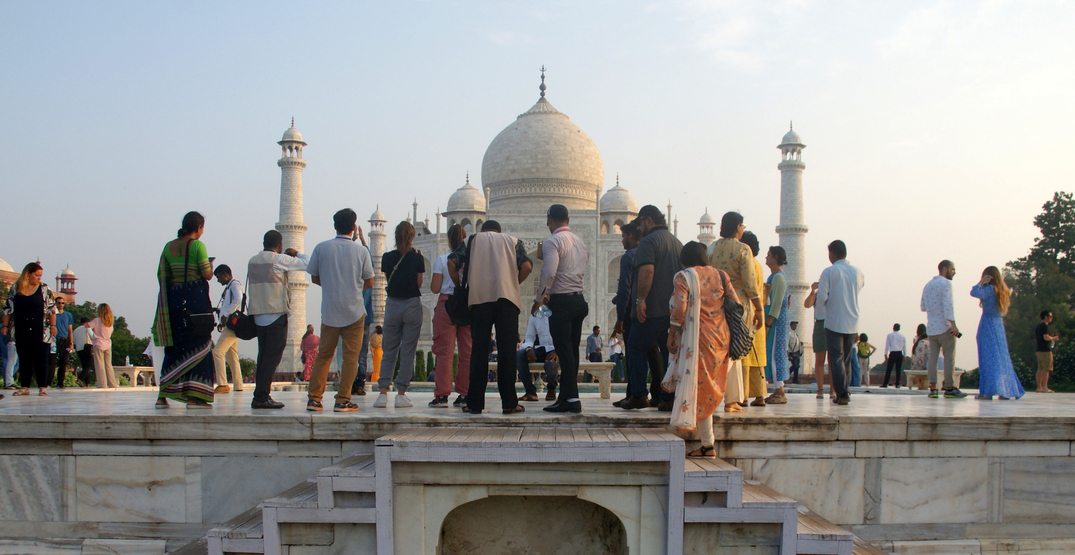 There are countless beautiful and enchanting places to visit in the world.

One of the few downsides of travel, however, is that you are likely not the first person to think to visit any particular destination. With such massive influxes of travellers journeying to particular sites, locations can be tainted, either by the substantial crowds, vandalism, or unavailability.

Some countries have gone as far as to implement certain sanctions, photo bans, and even tourism taxes to protect their various attractions, historical sites, and natural wonders. Others have stopped promoting certain attractions altogether.

Insider has released a list of 22 places that have been ruined by tourists in the past decade.

Experiencing a significant surge in popularity in recent years, Iceland has been on the top of many desirable destination lists for its stunning and unique natural landscape.

However, according to Insider, there are concerns regarding the environmental impact surrounding this inundation of tourism, as well as the direct harmful effect it may have on the quality of life for locals. More specifically, if this boom in tourism is a “bubble that could burst.”

The population of Iceland is only just over 340,000, and a bursting bubble could be severely detrimental to the country’s economy.

Additionally, attractions that have been widely documented such as the Blue Lagoon are described by some travellers as being overrated, with one visitor writing a review calling it “a dirty, lukewarm, crowded disappointment.”

If you didn’t post a pic of the blue and white buildings of Santorini on Instagram, did you even go?

Insider‘s post infers that although the islands of Mykonos and Santorini are “seemingly made for Instagram,” they are not necessarily ideal for large crowds.

Additionally, Insider explains, many locals have told travellers to avoid Santorini and Mykonos if they are looking to have an “authentic Greek experience.”

The Spanish island of Ibiza has long had a reputation of being the ultimate European destination to visit if you want to party.

According to Insider, a trip to Ibizia involves these core elements: “Sun. Sand. Surf. Clubs. And crowds. Lots of crowds.”

The post further explains that the crowds can get so intense that people are advising others to visit other portions of the island that do not have nightclubs or bars.

Jokingly referred to by some Australians and New Zealanders as “Sydney North,” Bali has continued to be more and more influenced by the Land Down Under over the years.

Insider‘s article references a piece written by Ben Groundwater from Traveller.com.au in which he describes that you can very much sense the Australian impact in certain parts of the region.

Although there are certain places that you can still escape it, journeying to such locations does take additional effort.

What was once a hidden Incan treasure, Machu Picchu is on the bucket lists of many travellers and hikers alike, bringing large amounts of tourism to the historical site.

The amount of visitors travelling there is so substantial that there has been a limit put in place concerning how many people can visit the site per day.

According to the Inca Trail Machu Blog, “In total, 5,940 people will be able to purchase Machu Picchu tickets 2020 every day.”

The tickets are only valid for four hours and do not permit re-entry.

According to Insider, 11 people have died in the climbing season this year on Everest, with images on social media illustrating the massive lines to reach the summit, which is not only shocking but also poses a serious safety issue.

Although hundreds of people trek to the summit per year, Insider explains that many more only make the journey to Base Camp.

Many trekkers, however, are not being respectful of this natural wonder, leaving “several tons of garbage and human waste” in their wake.

According to VisitDubai.com, the city saw 15 million international guests in 2019.

As a coveted destination for many tourists, Dubai has made a substantial amount of money from the tourism industry.

However, Insider notes, with all those people spending all that money, personal space is limited, “as anyone who’s tried to book a cabana or table at one of the emirate’s beach clubs can attest.”

With the city hosting Expo 2020 and promoting it on a large scale, it is unclear how the event will affect the city.

Although Petra gave us a mystical, foreign appeal in Indiana Jones and the Last Crusade, Insider explains, the vibe around there these days is much different.

The UNESCO World Heritage site is often overpopulated with pushy crowds and even pushier merchants lying in wake to overcharge unsuspecting tourists with gouged prices.

“Overall, it can feel like anything but an escape from everyday life.”

There has been a multitude of stories written about the over-tourism issue facing Venice.

The problem has become so severe that the city will be implementing a tourist tax starting in July 2020.

Over-tourism is so intense in Venice, according to Insider, “that they’ve basically become synonymous with each other in many people’s minds.”

While it is breathtakingly beautiful, if you plan on visiting Lake Lucerne in Switzerland, anticipate a lot of crowds.

According to one individuals’ review on TripAdvisor, “The city of Lucerne seems to be on every tourist itinerary. It’s beautiful, but (it) was also the most crowded place we visited in our two weeks touring Switzerland.”

The summer months, in particular, when the weather is warmer, draw in the most amount of people.

According to Swissinfo, overcrowding has been an issue for some time.

When people think of Portland, they often think of vinyl records, Voodoo Doughnuts, and hipster moustaches.

According to Insider, many people’s interpretation of Portland is that it is all about “honest folk music, quirky coffee shops, and dreaming of the ’90s.”

In reality, the local population is far less eccentric than you think, and you are more likely to see “dads in Old Navy than with piercings and tribal tattoos.”

Thanks to the massive cult following of Game of Thrones, Dubrovnik has been experiencing an enormous influx of tourists keen on exploring one of the most significant shooting locations of their favourite series.

“Not unlike how Daenerys Targaryen’s army was able to storm the city, real-life Dubrovnik is struggling against the horde of smartphone and selfie-stick-wielding tourists.”

The issue has gotten so intense that the government is limiting the number of cruise ships that can dock there each day.

Much like the massive wave of Game of Thrones fans venturing to Dubrovnik, Forks attracts a different sect of enthusiasts, Twilight fans.

The town of Forks, as well as the surrounding landscape, is abundant with dense green forests and beautiful ocean views.

“While there are no vampires or werewolves (sorry to disappoint), there are bears and cougars,” Insider explains.

“And unlike a certain Edward Cullen, they are not likely to fall in love with any humans they encounter.”

Growing increasingly appealing to celebrities, affluent individuals, and ordinary music lovers alike, Burning Man is on its way to becoming the Nevada equivalent of Coachella.

At the most recent edition, one specific camp — where tickets were $100,000 each — favoured by influencers was Burning-banned, following complaints from other patrons.

Another city facing issues of overcrowding is Germany’s capital and largest city, Berlin.

The city was built on the backbone of nightlife, but now, it may not be able to handle the number of people wanting to experience all that Berlin has to offer.

Insider explains, “Just look at how long the lines are these days to try to get into Berghain.”

The increasing cost of rent, coupled with ongoing gentrification, is also quashing the eccentric atmosphere and draw of the city.

Home to such unique attractions as an underwater hotel and the most romantic resort in the world, the Maldives have become a much sought-after destination for a luxury tropical getaway.

However, these accommodations are only occupied by tourists, not locals.

According to Insider, one of the primary concerns surrounding this surge in tourism is the negative environmental impact that comes along with them.

As well, climate change and rising sea levels are also a source of anxiety.

Both of these factors will have a lasting impact on the locals’ way of life long after the tourists have returned home.

La Pelosa is one of the most gorgeous, picturesque beaches in the world — as such, many people from far and wide come to admire its beauty, which leads to overcrowding.

The numbers tend to be highest in the summer when people journey there to soak up the heat of the Italian sun and cool off in the pristine turquoise waters.

To confront the number of visitors, authorities in the nearby town of Stintino plan to issue a fee to those wishing to access the beach.

Insider claims to contribute to cutting down tourist numbers to roughly 1,500 people per day. 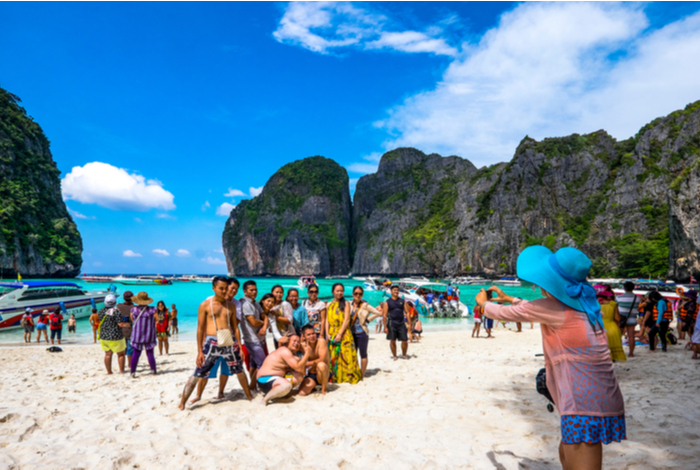 Garnering fame due to the famous Leonardo DiCaprio film, The Beach Maya Bay became so overcrowded that the beach actually closed.

The closure was due to the damage caused by the upwards of 5,000 tourists a day visiting the site.

It is tentatively set to reopen in 2021.

Beautiful UNESCO World Heritage Site and town used as inspirational fodder for Disney’s Frozen, Hallstatt, is one of the most recent examples of how media directly impacts tourism.

The town has received a substantial wave of tourism from the beloved animated films by tourists who can’t seem to “let it go.”

“Despite the adorable buildings and natural scenery of Hallstatt, I found it hard to enjoy it,” Insider‘s Rachel Hosie wrote.

“I found myself craving space, peace, and quiet, and was desperate to find somewhere not rammed with people.”

In an effort to decrease overcrowding, authorities implemented a three-hour time limit for those visiting the Taj Mahal as well as fines for those who exceed the allotted duration.

They also dramatically increased fees to manage the number of local visitors, with authorities instilling limits of 40,000 Indian visitors per day.

However, the massive amounts of visitors partnered with the crucial issue of air pollution put the monument at risk.

Once again, the downside of film-tourism rears its head.

The highest-grossing R-rated movie in the world, The Joker, has had tourists flocking to a specific stairway in New York’s Bronx neighbourhood to get their picture on them.

The stairway is depicted in the film as the location where Joaquin Phoenix danced in a moment signifying his character’s transformation from Arthur Fleck to The Joker.

The influx of visitors to this location comes much to the dismay of Bronx locals who use the staircase daily.

The I amsterdam letters are on the move! They’ve been removed from Museumplein at the request of @AmsterdamNL, but you can still find them @Schiphol, as well as at festivals and events across the #AmsterdamArea. Read more: https://t.co/ydjvheHCMd (📷 by https://t.co/nMKKQmlA0c) pic.twitter.com/4513ejipPP

However, it has since been taken down amidst concerns that it was encouraging mass tourism.

According to Insider, tours of the city’s famous Red Light District will also be banned starting in 2020.