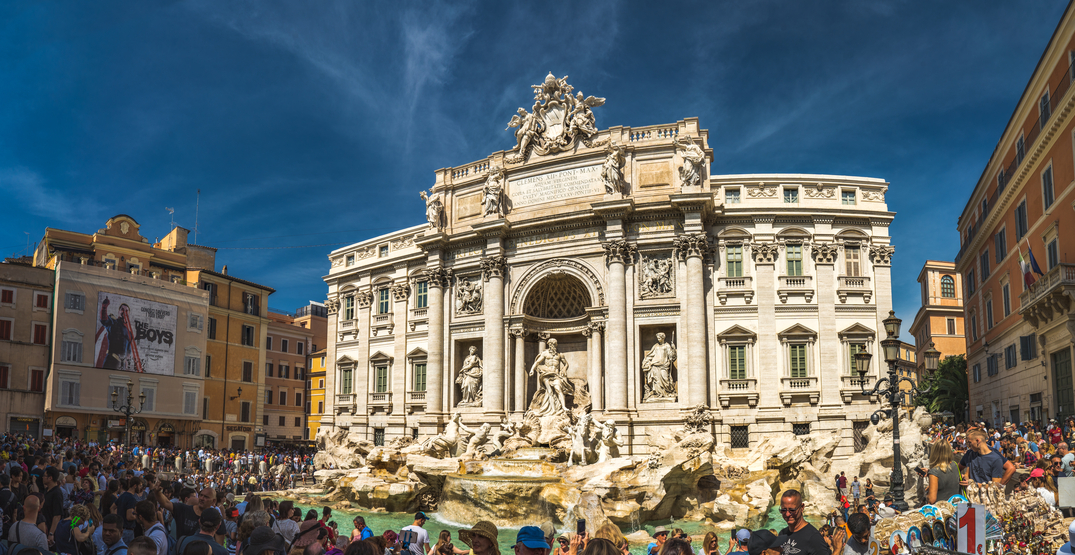 The city of Rome is considering putting new policies in place to improve the management of tourists visiting one of its most well-known landmarks, the Trevi Fountain.

Constructed in the 18th century, Trevi Fountain is the largest Baroque fountain in Rome on top of being one of its most popular, recognizable, and beloved tourist attractions.

According to a report by Wanted in Rome, Italy’s capital attracted 15.2 million tourists and 36.6 million overnight stays in 2018.

It is safe to assume that a majority of these visitors went to see the famous fountain and participate in the tradition of throwing a coin into it — to make a wish that they would one day return to Rome again.

The issue is that the fountain faces the small Piazza di Trevi, and a significant number of tourists visiting each day not only causes congestion of the small area but also damages the fountain itself. Damage caused by tourists sitting on the edge of it for the perfect ‘Gram, for example.

The harm to the fountain is why the municipality of Rome has a new proposal to better the regulation of access to the Piazza, a proposition that will soon be debated in the Campidoglio, Rome’s city hall.

There have also been multiple reported cases of tourists exhibiting shockingly inappropriate behavior at the historic site. Just this year, an Italian woman was stopped carving the fountain with a key, an American tourist was caught bathing in it, and three drunk Australians were caught pouring their drinks into the water.

This is why we can’t have nice things!

Andrea Coia, president of the business committee of Rome’s city council as well as a member of Italy’s self-billed anti-establishment Five Star Movement, has presented the proposal to the entire city council.

One of Coia’s suggestions to protect the monument is erecting barriers to ensure that people are unable to sit on the marble or jump in the water — both of which are already prohibited but still happen consistently.

Coia told CNN Travel, “I put forward the motion because the symbolic places of our city need more control and attention,” stating that his suggested checkpoints on access roads would “safeguard one of the world’s most beautiful places and assure a better experience for those who want to enjoy it.”

There will also be a limit on the number of people permitted inside the Piazza at the same time, which will be regulated by one or two policemen positioned at each of the five streets that lead into the Piazza.

The goal of these policies is to guarantee increased safety for tourists regarding space and protection from pickpockets — or fistfights over occupying the best selfie spot.

While the proposal hopes to put an end to illegal activities occurring in front of the fountain, the primary motivator is, of course, to ensure that the Trevi fountain is safe and damage-free.