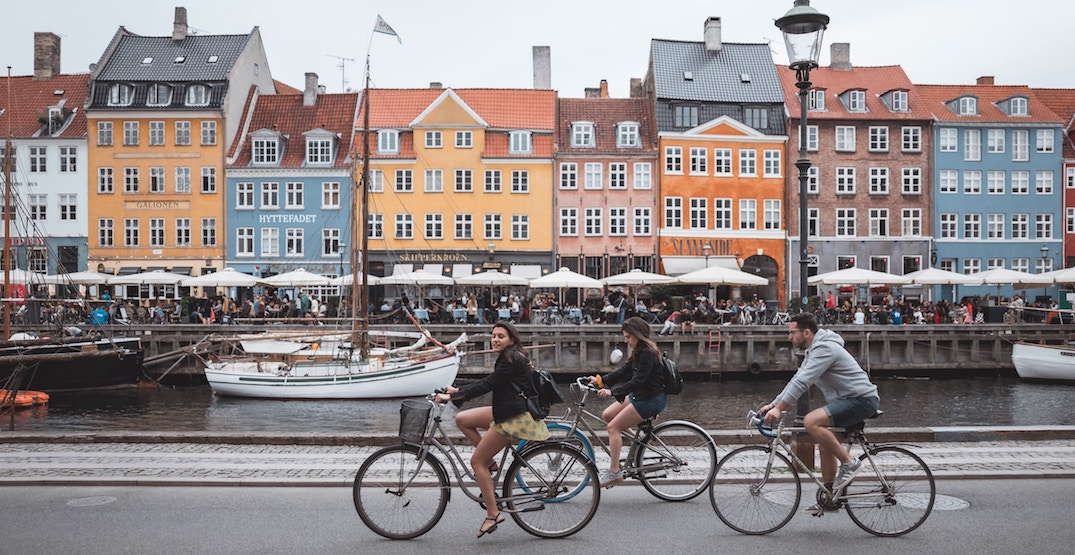 Technology has transformed the way humans travel. We hardly blink when an electric scooter, segway, or hoverboard glides by. It might not be long before we’re bouncing to work on dockless pogo sticks.

But as urban mobility evolves and trends shift, the humble bicycle withstands the test of time. Bikes remain widely used for urban commutes thanks to their practicality and functionality. In a world of rising carbon emissions and gas prices, bike-friendly cities may become more important than ever before.

Cities around the world have been taking steps to accommodate and promote the use of bicycles. They not only improve urban liveability and commuting, but also provide benefits to tourists.

Biking is an affordable mode of transportation that allows visitors to cover ground quickly, get their bearings, and actually see the city (as opposed to riding on a metro train that’s more like a sardine can as it zooms through the vast nothingness of the underground).

Between expanding local bike-share programs, friendly neighbourhood bike rental shops, guest properties offering complimentary bikes, and various cycle tour options, it is easier than ever to travel on two wheels. Unfortunately, some cities are much more bike-friendly than others.

Where are the best places to explore by bike? Here are 15 of the most bike-friendly cities in the world.

Denmark’s capital is widely regarded as the world’s most bikeable city. Copenhagen was dubbed #1 in this years’ Copenhagenize Index, a comprehensive ranking of the most bike-friendly cities on the planet. Numbers show that 62% of locals commute by bicycle. According to the Index, Copenhageners collectively cycle 894,000 miles each day.

Maybe you’ve been to Amsterdam. Maybe you’ve seen that famous Swedish portrait of the bicycle on the canal. Either way, it probably doesn’t surprise you that there are more bicycles in Amsterdam than people, as reported by the BBC. Ranking #2 on the Copenhagenize Index, the city is continuing with major projects to accommodate increasing bicycle traffic. Initiatives include creating new “royal routes” for cyclists, widening existing bike lanes to over eight feet, and improving bicycle parking infrastructure.

While most Dutch cities qualify as bike-friendly, Utrecht is a standout. In addition to world-class cycling infrastructure, the city boasts political will to transition motor vehicle drivers into cyclists. At present, politicians aim to double the number of bicycle commuters by 2030.

While Dutch and Danish cities lead the charge, a few North American cities are also being recognized for being bike-friendly. Among them is Austin, Texas, which boasts three major cycling paths crisscrossing town, one of which is called the Lance Armstrong Bikeway. For those looking to work off a rack of BBQ ribs, rest assured that bike racks and rental shops also abound. Looking to ride with locals? Join the Sunday Cycle Cruise put on by Social Cycling Austin.

Breaking into the Copenhagenize Index’s Top 20 this year, Vancouver is one of the few North American cities to push the boundaries of urban cycling. Vancouver has been expanding its bike-friendly corridors and boasts Mobi, the highest city-wide bike-share system, in Canada despite public “bikelash.”

Tied with Vancouver for the Copenhagenize Index’s #18 spot, Montreal has been the only North American city to feature on the Index consistently. Since 2017, Mayor Valérie Plante’s administration is implementing a bold bike-centric project known as The Réseau Express Vélo, which will bring nearly 200 km of new cycle tracks to the city.

With everything from BrewCycle tours to a Friendly Bike Guesthouse, Portland has been a bike-crazy city for decades. According to Portland Monthly, an 1896 cycling map with dedicated bike lanes and suggested pit stops shows that bikes and brews have been BFF’s since the 19th century. Today, Portland’s Nike-sponsored Biketown bike-share service offers 1,000 bikes from 125 stations city-wide for only 8¢ USD per minute. The snazzy orange bikes have eight gears and built-in GPS too.

With 200 km of designated cycling paths, the Hungarian capital of Budapest is working its way up the list of the world’s most bike-friendly cities. Budapest’s bike paths are a great way to get around the city centre or explore its many parks, attractions, and bathhouses. Budapest Bike Breeze even offers a guided tour that ends with a steaming bowl of goulash.

Tokyo has been a haven for cyclists for many years, but more credit has been given to its people than its bike-friendly infrastructure. Millions of people rely on bicycles in this bustling metropolis, particularly the iconic Mamachari utility bike that’s built to handle everyday needs.

Locals of all ages cycle through Slovenia’s small capital, where a car-free city centre branches out to a network of bike paths. With an easy-to-use bike-share system and an abundance of green spaces (plus a lack of parking in the centre), cycling is the optimal way to navigate this darling city.

With so much packed into the sprawling city, cycling offers a great way to get around Paris for locals and tourists alike. While cyclists traditionally shared bus lanes, new bike-designated lanes have sprung up in places like the Champs-Elysées. Though Strasbourg is often called France’s most bike-friendly city, it’s hard to compete with the comprehensive Velib’ bike system. Named with a mashup of the words vélo for bicycle and liberté for freedom, Velib’ is the largest bike-share in the world outside China. Paris is home to 1,800 docking stations and 20,000 bikes, with baskets deep enough for all the baguettes.

This French city ranked #6 and beating Paris by two spots in the 2019 Copenhagenize Index. Bordeaux’s local administration continues to reduce car space in favour of sustainable transport options in places like the historic Pont de Pierre bridge, where car traffic was banned two years ago.

The South American leader of cycling initiatives has burst into the Copenhagenize Index’s Top 20 this year. Though Columbia’s capital remains a car-congested metropolis, it has popularized Ciclovía, a Sunday activity that closes over 100 km of streets for citizens to bike, stroll, and party. According to Lonely Planet, the roughly two million people (25% of Bogotans) participate each weekend.

Oslo ranks #7 on the Copenhagenize Index and puts other hilly, snowy cities to shame. With cars recently banned from a solid chunk of the urban core, large investments in traffic calming, and the removal of over 1,000 parking spots, the city has opened up for a surge of cyclists and pedestrians.

Vienna placed more focus on communications and policy than infrastructure through their clever #warumfährstDUnicht? (#whydontYOUcycle?) campaign. The social media campaign targeted hip millennials and influencers and flipped common excuses not to bike on their head and was successful enough for Vienna to earn the #10 spot on the Copenhagenize Index.

As you pedal out into the sunset to discover all the world has to offer, be sure to look both ways and consider rocking a helmet!