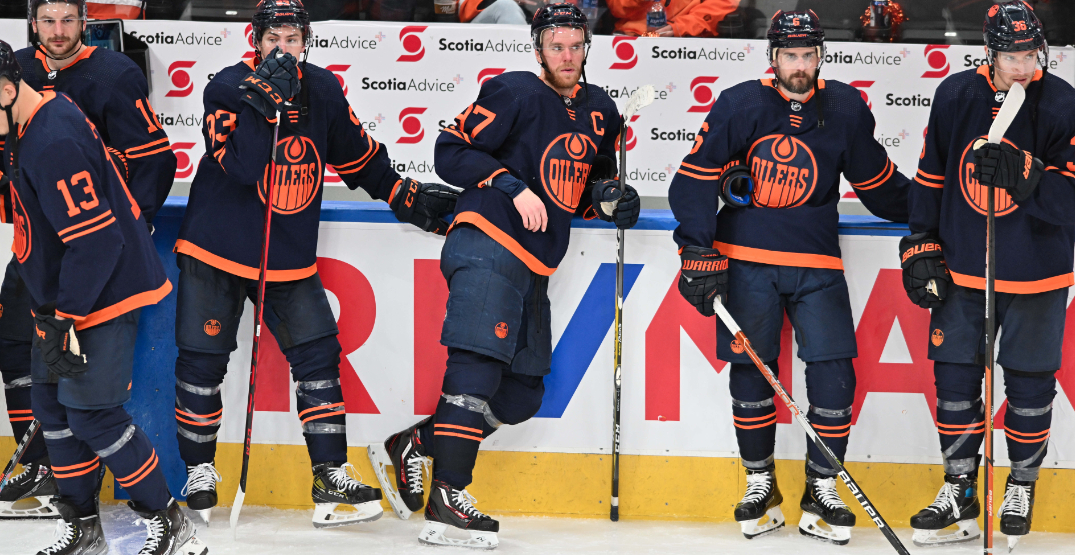 The Edmonton Oilers came a long way in showing their Stanley Cup aspirations in the 2022 Stanley Cup Playoffs thanks in large part to some major contributions from some of their top-end contributors.

But, as general manager Ken Holland says, “the team we just had we can’t keep together because of the salary cap. It’s the cap world. I’m going to try and make the team the best that I can.”

It’s a cap world alright, and Edmonton is already feeling the squeeze.

There’s no discount Evander Kane to be had, either, meaning Holland & Co. are going to need to maximize some creativity in order to return a roster in 2022-23 that is able to once again compete for a Western Conference crown and, eventually, push for the Stanley Cup.

Edmonton has 15 players inked to contracts for the 2022-23 season, including eight forwards, seven defencemen, and one goaltender. One of those blueliners, however, is Oscar Klefborm, who currently sits on long-term injured reserve and isn’t expected to resume his NHL career after a significant shoulder injury and successful surgery.

The Oilers also have three restricted free agent forwards in Ryan McLeod, Jesse Puljujarvi, and Kailer Yamamoto — each with different qualifying offers and projected roles among Edmonton’s group up front. They’ve got unrestricted free agents in Josh Archibald, Derick Brassard, Colton Sceviour, Kyle Turris, and Kane — who has seemingly said farewell to the Oilers faithful, indicating he isn’t likely to be back.

The blue line is set to lose Kris Russell and, potentially, Brett Kulak. Kulak was scooped at the NHL trade deadline and had a favourable showing in the playoffs.

In net, Mikko Koskinen has already committed to Switzerland, and Mike Smith hasn’t seemed to commit to anything just yet despite having one more season remaining at $2.2 million.

The good news for Edmonton is, outside of Kane, they’ll return all their top forwards. Connor McDavid will anchor the top line, likely with Zach Hyman, and Leon Draisaitl can expect to form a counterpunch with Ryan Nugent-Hopkins on his wing. Zack Kassian, a potential buyout candidate to clear some cap room, is also set to return, as is Warren Foegele, another option to clear space. Depth forwards Derek Ryan and Devin Shore are also slated to come back.

On defence, nearly the entire roster will return. That means Darnell Nurse and his $9.25 million contract with quarterback a defence that’ll also feature veterans Duncan Keith, Tyson Barrie, Cody Ceci, and youngsters Evan Bouchard and Philip Broberg. Not much work, outside potentially returning Kulak, is required. That is, provided Keith returns.

It’s in the crease where things get tricky. Smith may or may not be back, and the Oilers have asked for clarification on that front. Stuart Skinner, whose contract flips to a one-way next season, is the expected backup regardless of what happens.

Not a lot of wiggle room to lock in five forwards, a defenceman, and, potentially, a goaltender.

Evolving Hockey projects Yamamoto to net a five-year contract worth an average annual value of $5.248 million. They also toss out an estimate of a four-year deal worth $4.132 annually for Puljujarvi, and a friendly two-year $1.354 million pact for McLeod.

For Puljujarvi’s camp, and Edmonton’s for that matter, a shorter-term contract would probably be preferable after an up-and-down season that saw him finish the year with eight goals in 54 games before scoring twice in 16 playoff games. A bridge deal around the $2 million mark should allow the Oilers to retain the possession-machine Puljujarvi and allow the No. 4 pick in the 2016 draft to regain form.

Yamamoto may be a little trickier. The 5-foot-8 forward had 20 goals and 41 points in 81 games, and primarily skated in Edmonton’s top-six. He’s coming off a one-year deal, and due for a raise, and anything longer than three seasons is going to start buying into pending UFA seasons. He, like Puljujarvi, is also arbitration eligible. Another bridge could be in the works, much like the rest of his 2017 classmates. Comparables should be north of Dillon Dube’s $2.3 million over three years.

McLeod’s situation, which comes with just 81 NHL games on his resume, would make sense for both sides.

No doubt Edmonton would love to find a way to return Kane and his 40-goal regular-season and nearly a goal-per-game pace in the playoffs. That’s a tight squeeze with his rumoured ask beginning in the $7 million neighbourhood. Outside of Kulak, the Oilers are in a primed position to go shopping to fill some roles.

Skinner, 23, will tend twine for the Oilers in a support role. This we know. Broberg will also get a long look on the blue line. This we know. But Dylan Holloway will be at the forefront up front, in everyone’s eyes, as a player who can pitch in up front on a bargain, entry-level contract. Raphael Lavoie will also get an opportunity to do the same, providing Edmonton with two bargain contracts to help round things out. 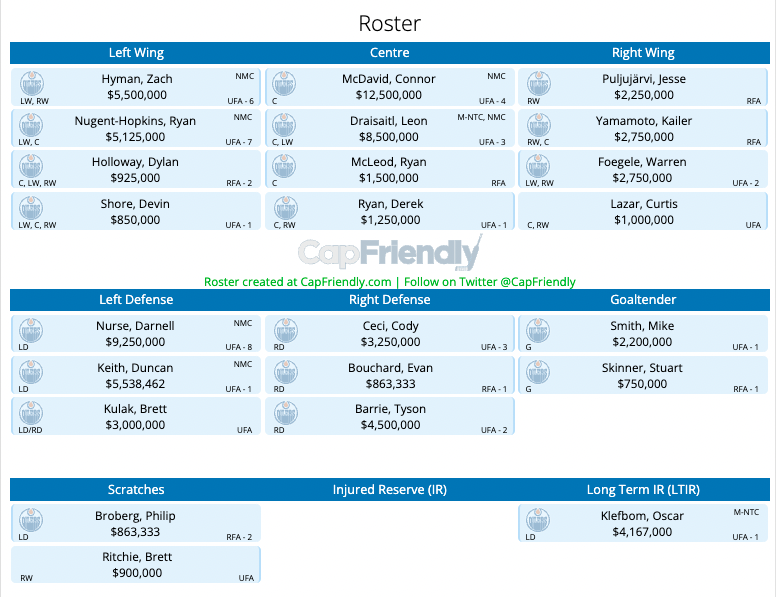 We’re going to go ahead and sign McLeod to his projected contract, a two-year pact at $1.5 million. We’re also going to bring Puljujarvi back on a one-year, $2.25 million deal, and tempt Yamamoto with a two-year, $2.75 million bridge deal. Let’s elevate Holloway to the main roster, too. That’ll give Edmonton 12 forwards with a maximum of two to go.

Unrestricted free agent depth additions of Brett Ritchie and Curtis Lazar will allow some flexibility up front, too. Kulak seemed to be a good fit on Edmonton’s blue line, too, so nabbing the local product on a three-year, $3 million contract could be feasible.

Those transactions would put Edmonton just a nose under $6 million over the cap. Not ideal.

But a large chunk of that is cleared by Klefbom’s LTIR status, as would unloading Kassian’s contract to a cap-hungry team. Kassian’s catch, however, is term with two years remaining on his $3.2 million deal. Failing a buyer at a cost of a second round pick, Kassian’s buyout still offers enough room to sneak under the cap, as unattractive as that option is.

With the buyout and LTIR of Klefbom, the following roster squeezes Edmonton uncomfortably under the cap.

The above doesn’t factor in Smith’s situation. Should he retire, on the long-term injury front or not, the Oilers need to find a suitable replacement that can backstop a team with Stanley Cup aspirations and a rookie backup behind him. Not a lot of true No. 1 picks to be had for right around the $3 million mark.

Top free agent goalies like Marc-Andre Fleury and Darcy Kuemper won’t come in at that figure, nor is it likely Jack Campbell or Ville Husso will be had in the range. Pending a corresponding Barrie move, Edmonton isn’t left with much other than sending out feelers on 32-year-old Braden Holtby, who did post a .913 save percentage with the Dallas Stars in 2021-22.

A Holtby signing, short term and under the $3 million mark, leaves the Oilers with just a hint of space. 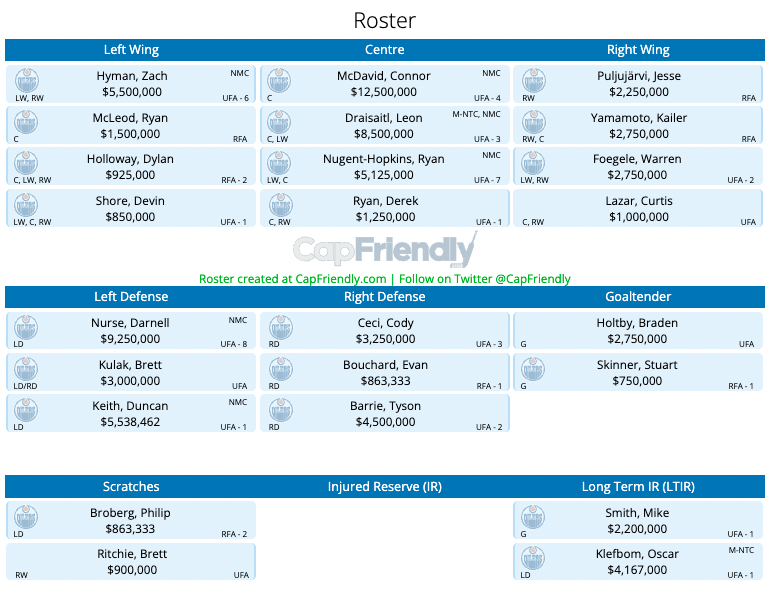 It’s not an ideal scenario, but there is a way to largely run back the same roster, sans Kane, that the Oilers saw plenty of success with in 2021-22.

The pessimist will point out that the roster isn’t necessarily improved, and certain cap moves just kick the problematic can down the the road to be dealt with at a later date.

And with the top-end talent they possess, that might be all it takes.