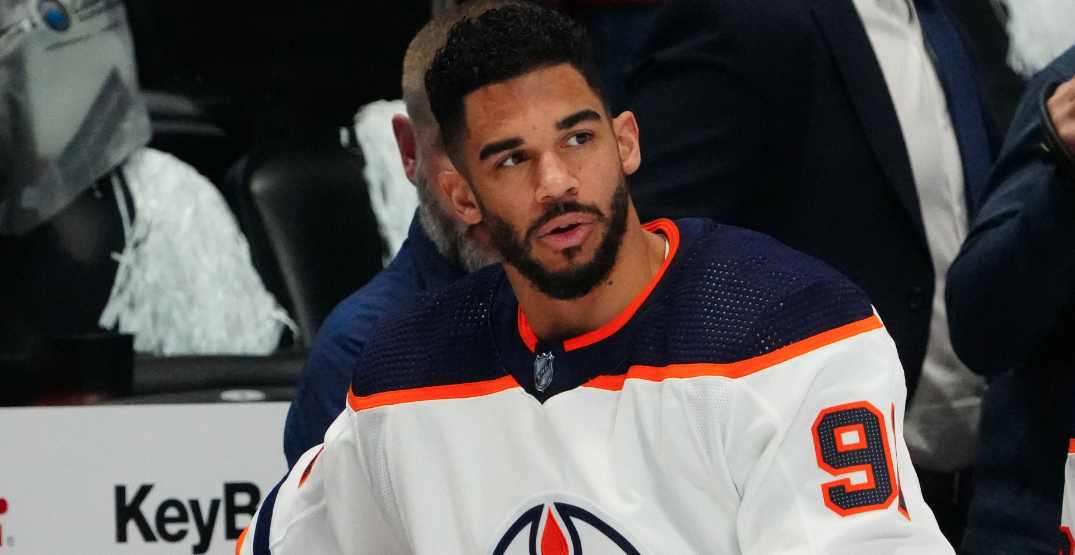 Evander Kane was looking for the right landing spot six months ago.

He hit with the Edmonton Oilers.

Kane, who signed a one-year, $1.375 million in a gamble to ride shotgun with Connor McDavid and the Oilers after having his contract terminated by the San Jose Sharks in January, hit the jackpot with one of the season’s most impressive 43-game runs and capped it with a performance in the Stanley Cup Playoffs that’s going to get him paid.

Now the question turns to whether or not Edmonton can keep him.

The magic eight-ball suggests the outlook’s not so good.

“Obviously he’s an unrestricted free agent,” Oilers general manager Ken Holland said in his final address to media on Wednesday. “Am I interested in bringing him back? Yes. I think he had a big impact on our team, not only his ability to play goals but he plays with an edge. I thought there was wonderful chemistry between him and Connor.

“Can I keep him? His cap number is $2 million. I don’t expect him to play for a $2 million cap number next year. I don’t know what it is. I’d have to sit and talk to his agent, Dan Milstein. I’ve got decisions to make and have got to go through a process.”

It’ll be a rigorous one.

Kane, who had 22 goals and 17 assists in 43 regular-season games, could come in north of that, according to one NHL insider. ESPN’s Kevin Weekes thinks that Kane will get at least $7 million per season.

“Going forward, that number to me certainly has at least a seven, if not an eight on it for sure, just based on what Evander Kane has meant to that team, his production, and the X-factor that he is,” Weekes said on Tim & Friends on Wednesday. “Not only can he beat you on the scoresheet, you look at where he ranks in terms of goals. It’s an incredible performance that he had in regular and postseason.

Evolving Hockey projects that Kane, who had 13 goals in 16 playoff games in helping Edmonton to the Western Conference Final, signs elsewhere to the tune of a five-year deal worth $7.4 million annually.

Kane was non-committal on Tuesday in his desire to return, too.

“I think moving forward, obviously, there’s a lot of things that factor into a decision,” Kane said, adding that he was “very happy with my time here.”

Should he want to run it back, it’ll come with just a slight discount, as Weekes points out.

One the Oilers might not be able to afford regardless.

Because either way, Kane is cashing in.