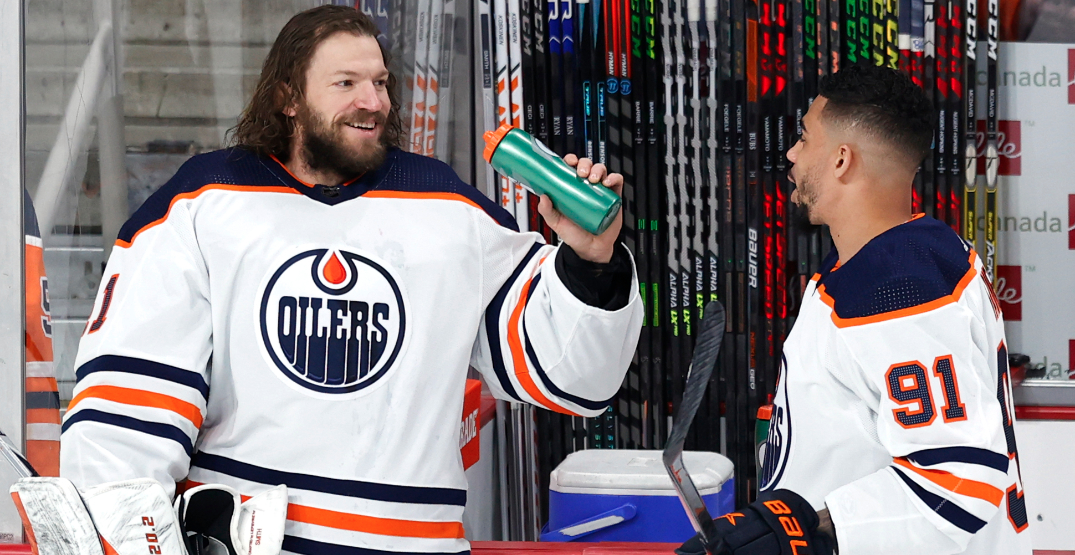 A sweep in the Western Conference Final at the hands of the Colorado Avalanche stings, but it probably shouldn’t overshadow what was most definitely a successful season for the Edmonton Oilers.

The Oilers advanced to the third round of the Stanley Cup Playoffs for the first time since the 2006 Cup run that saw Edmonton fall to the Carolina Hurricanes, and a 104-point regular-season campaign is the seventh-best for the squad all-time.

Lots to be happy about.

Plenty to build on, too.

And general manager Ken Holland has lots of business to get done between now and when puck drops on the 2022-23 season with perhaps the highest expectations of an Oilers squad in recent memory.

1. What’s the Oilers solution in net?

Edmonton’s goaltending situation throughout the 2021-22 season, and even to a certain degree in the playoffs, wasn’t exactly lights out.

It might not have served as a full-on Achilles heel, but by no means was the combination of Mike Smith and Mikko Koskinen confidence-inspiring.

But Koskinen is expected to return to Europe as an unrestricted free agent, and Smith expressed some real concern in exit interviews as to whether or not he could be the guy to tend twine. Stuart Skinner, 23, is on a one-way contract next season and will likely serve as a backup, but to whom?

The goaltending market has some intriguing options, from Jack Campbell to Darcy Kuemper to Braden Holtby. Acquisition cost is cheap on an unrestricted free agent, but whether Edmonton can facilitate a deal without handcuffing themselves is a bit tricker.

2. Is Kane actually an option to return?

The biggest expiring contract, in terms of significance, is that of Evander Kane. Holland expressed an interest in bringing back Kane, who had 22 goals and 17 assists in 43 regular-season games and another 13 goals in 16 playoff games. Not a shock why he’d want to return that kind of production in the winger who seamlessly rode shotgun with Connor McDavid after signing a one-year bargain of a pact with Edmonton after his contract with the San Jose Sharks was terminated.

That type of production doesn’t come cheap, though. Kane, who was non-committal in declaring his interest in returning to Edmonton in his exit interview, could command north of $7 million to return to Edmonton, according to NHL insider Kevin Weekes, and over $8 million on the open market.

With such limited cap room to manoeuvre and pressing needs in goal and up front, it’d be difficult to see any scenario which Edmonton can afford to bring back the perennial 30-goal scorer who projected out to over 40 on the Oilers’ top line this season. Still, they’ll surely give it a shot.

3. How can the Oilers escape cap hell?

Any offseason free agent moves are made incredibly complicated by the fact the Oilers just don’t have any cap space to play with. Edmonton has just over $7 million of cap space, according to CapFriendly, with six free-agent forwards and two one defenceman to replace, as well as the addition of Skinner to the roster.

Among the restricted free agent forwards that need new deals is Kailer Yamamoto and off-debated Jesse Puljujarvi. For the most part, replaceable depth will come off the books in other areas, but few eating significant salary.

Holland suggested in his exit interview he’d look at any and all options to improve his team, and that might have to come via addition from subtraction. Players like Zack Kassian and Warren Foegele, have two years remaining on multi-million-dollar contracts that haven’t necessarily been the best value buys, so optioning those off would be a start.

Holland also has contracts in Duncan Keith and Tyson Barrie that could hinder some moves, too, should they remain with the club.

4. Does one of Puljujarvi or Yamamoto have to move?

Puljujarvi, the No. 4 pick in the 2016 NHL Draft, is a restricted free agent coming off a two-year contract that paid him $1.175 annually. Yamamoto, selected in the first round (No. 22) in 2017, is coming off a one-year deal that also paid him $1.175 million annually. Each is going to get a raise and, if the Oilers want any sort of term on the deal, is going to be inking deals that are at least triple that.

It’s a good problem when you have players commanding raises based on performance — most of the time. For Edmonton, it’ll almost certainly put an end to the tenure of one of them.

The question becomes who stays and who goes?

5. Which prospects can step up to the main roster?

The Oilers are going to need some entry-level contracts in Edmonton to help round out the roster. It’s just a fact in the cap world. Fortunately, the club has several knocking on the door that could be ready for a full-time run in the show.

Among them are a few of the organization’s most prized prospects, too.

Dylan Holloway will almost certainly be at the forefront from fall’s training camp, as the 20-year-old Wisconsin alum looks to build off a strong season as a first-year pro with the Bakersfield Condors of the American Hockey League. He’s likely to be joined by Condors teammate and fellow first round pick Philip Broberg, who could slide in to play a key role on defence. Raphael Lavoie might be able to pull spot duty in a depth role, but more seasoning in the minors is likely the better option.

Things get a little thin after that, though. Xavier Bourgault will need some seasoning in the minor leagues after a standout career in the QMJHL, and Ty Tullio, who shredded the OHL, isn’t going to make an immediate impact.