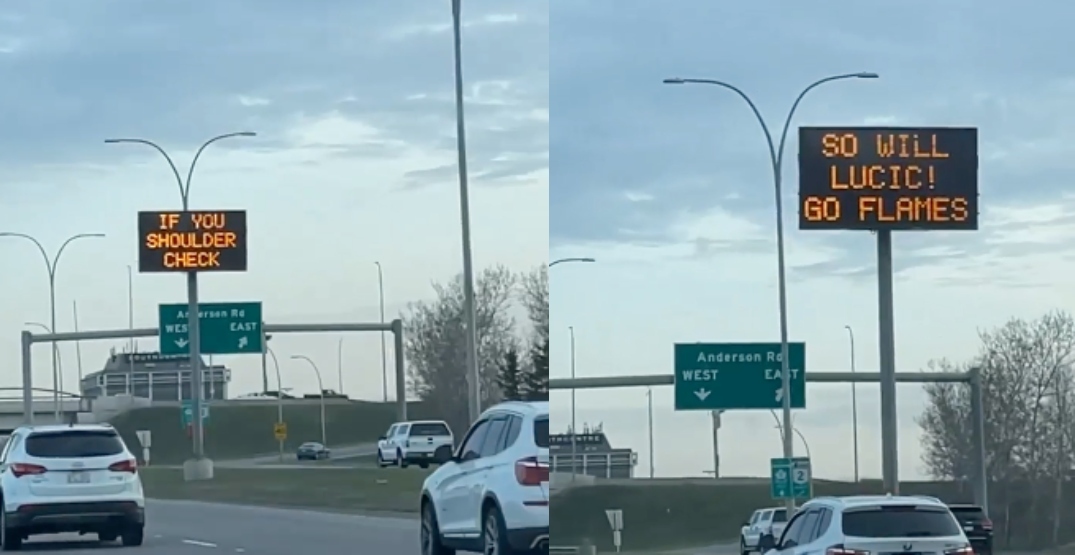 As the Stanley Cup Playoff fever sweeps Calgary, the City is asking people to share clever Flames-related road sign ideas, as a part of its Traffic Tuesday program.

The Calgary Flames could get one step closer to winning the Stanley Cup Playoffs tonight, giving the team its first chance at a playoff series win since dispatching the Vancouver Canucks in six games in 2015.

The City of Calgary is cheering on the NHL team along with many other Calgarians, showing off that “C of Red” spirit in a few fun ways.

At the beginning of May, road signs spotted on Deerfoot Trail and Macleod Trail displayed the message, “If you shoulder check… so will Lucic! Go Flames.”

Another road sign message displayed during this playoff season read, “Be like the Dallas Stars, stay in your lane.”

Now, the City is looking for input from Flames fans. Calgarians are invited to get in on the fun by submitting their Flames-related road sign ideas online.

These road signs are part of a City-run program called Traffic Tuesday. According to the municipal government, major cities across North America have been adopting funny and topical traffic safety messaging to help reduce the number of fatalities on their roads.

In May 2021, Calgary introduced a similar program in which select message boards and signs in the city would display punny or unique traffic safety phrases that Calgarians have submitted.

The Traffic Tuesday signs have made reference to the Flames even prior to playoff season. In December, a sign on Centre Street near 3rd Avenue South told drivers what kind of tactics the current Calgary Flames head coach prefers.

In addition to Flames-themed Traffic Tuesday road signs, the City of Calgary is displaying a giant metal flaming “C” in Municipal Plaza, built by the welding and fabrication shop in 1989 when the Flames won the Stanley Cup. It included a special mounting piece to hold the cup in the victory parade 36 years ago.

After the parade, the flaming “C” was displayed at the Municipal Building so that Calgarians could go and take pictures with the Stanley Cup.

Now, the giant flaming “C” is back – and, hopefully, the cup returns to our city this year too! 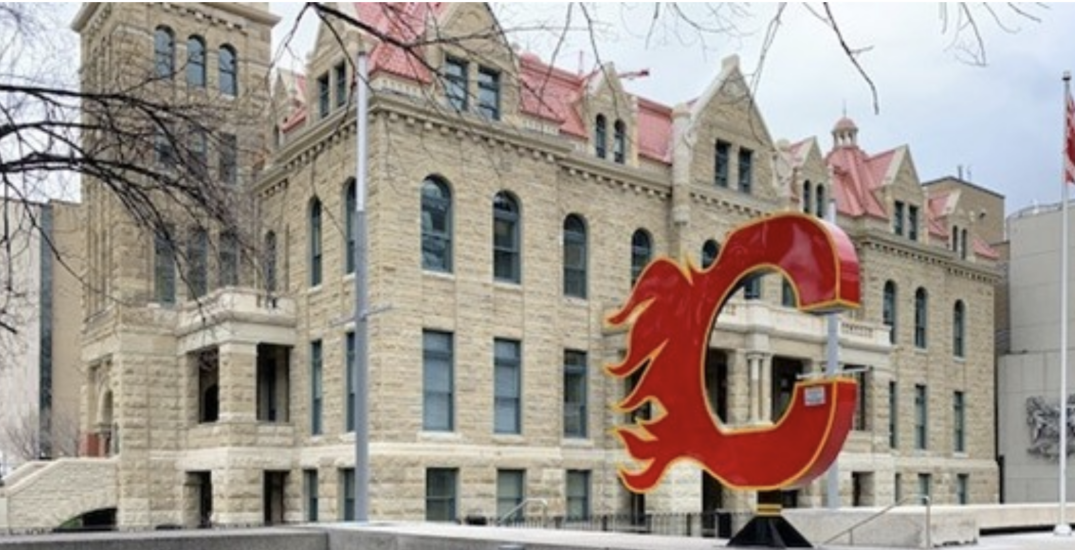 Courtesy of the City of Calgary

Flames fans can check out the sign sitting in front of the Municipal Building at 800 Macleod Trail SE and keep an eye out for hockey-themed road signs around the city.

The Flames lead the Dallas Stars 3-2 in their opening-round matchup to kick off the Stanley Cup Playoffs, and if the Flames take Friday night’s game against the Stars, they’ll advance to the second round of the playoffs.

With files from Aaron Vickers