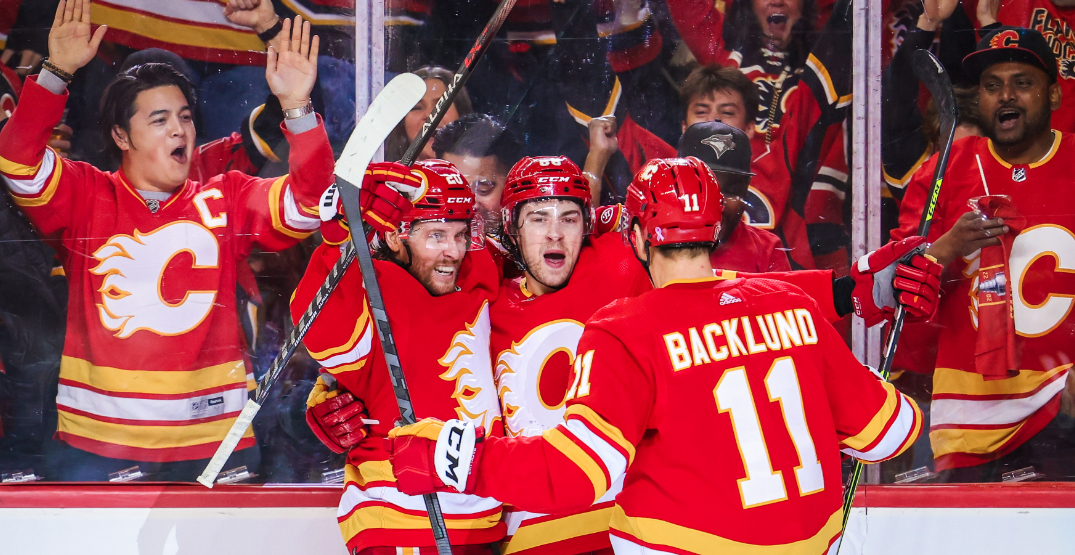 The Calgary Flames have a playoff opponent on the ropes for the first time in seven years.

And Friday will be the first time since 2015 that they can deliver that knockout punch.

The Flames lead the Dallas Stars 3-2 in their opening-round matchup to kick off the Stanley Cup Playoffs, giving Calgary its first chance at a playoff series win since dispatching the Vancouver Canucks in six games in 2015.

“If there’s something I’ve learned over the last few years, it’s that closing a team out is the hardest part of a series and winning that fourth game is the hardest game you have to win. The job certainly isn’t done. It’s still a lot of work ahead of us here. They’re going to be a proud group. You’ve got to put them in a position where they just don’t want it anymore.”

Sure, Calgary ousted the Winnipeg Jets from postseason contention in 2020.

But that was a best-of-5 play-in set for the right to advance to the first round two years ago, and the Flames were eliminated in what was officially the first round by the same Stars team; they’re able to serve up a tasty plate of revenge at American Airlines Center.

Coleman wasn’t a member of that squad that lost two years ago.

But he knows, perhaps more than any other Flames skater, what the next step is.

“This is the time of year you can’t take your foot off the gas at all and can’t let up or show any weakness,” said Coleman, a veteran of 58 playoff twirls.

“You’ve got to kick guys when they’re down. It’s going to be a great atmosphere, obviously. Their backs are against the wall. You’ve got to match that intensity and that willingness to pay the price to win.”

It’s been an interesting up and down ride to take a one-game edge into the final two contests.

The Flames managed just three goals in three games to fall behind 2-1.

Four goals in Game 4 and a trio in Game 5’s come-from-behind victory moved Calgary from one game down to one game up — with a chance to ‘kick’ the Stars into an early offseason with one more 60-minute effort.

It’s new territory for a lot of the roster in red.

“Bottom line is at the end of the day, we’ve got a lot of guys who haven’t won a fourth game,” Flames coach Darryl Sutter said bluntly. “That’s the next step in the process. See if we’re capable of doing that.”

Calgary lost to the Anaheim Ducks in five games after besting Vancouver in 2015.

They were unceremoniously swept by the Ducks two years later.

The Flames won Game 1 against the Colorado Avalanche in 2019 before losing four straight in a playoff punt.

Dallas dumped them in six games in 2020.

That makes one series win since playing for the Stanley Cup Final in 2004.

“There’s all these older guys that have won it, and it’s hard to go that far again, and they have to challenge themselves to see if they can because it’s a huge price they pay,” started Sutter, whose franchise is 7-3 in a best-of-7 series when winning Game 5 to break a 2-2 tie, with three wins coming in six games.

“Then there’s probably younger guys that win it, and they don’t remember what happened. They’re kids. But I think the recency effect has a lot to do with it. I think Blake Coleman and Trevor Lewis and Ty going last year to the Finals too, I think that has a bigger impact than anything.”

“It’ll be desperation. They’re going to be extremely hard-working. Going to do everything right. We need to match that intensity and play as we can for 60 minutes.”

Desperation from the Stars, who’ll be fired up to save their season.

Desperation from the Flames, who are starved for postseason success.

“We have a handful of guys that have won Cups and gone on long runs, things like that,” Coleman said. “There’s guys that have handled their business in winning that fourth game. I think that [the] third period is a great model for us to keep building on.”

“If we play like that in this next game, then we’ll be in great shape.”