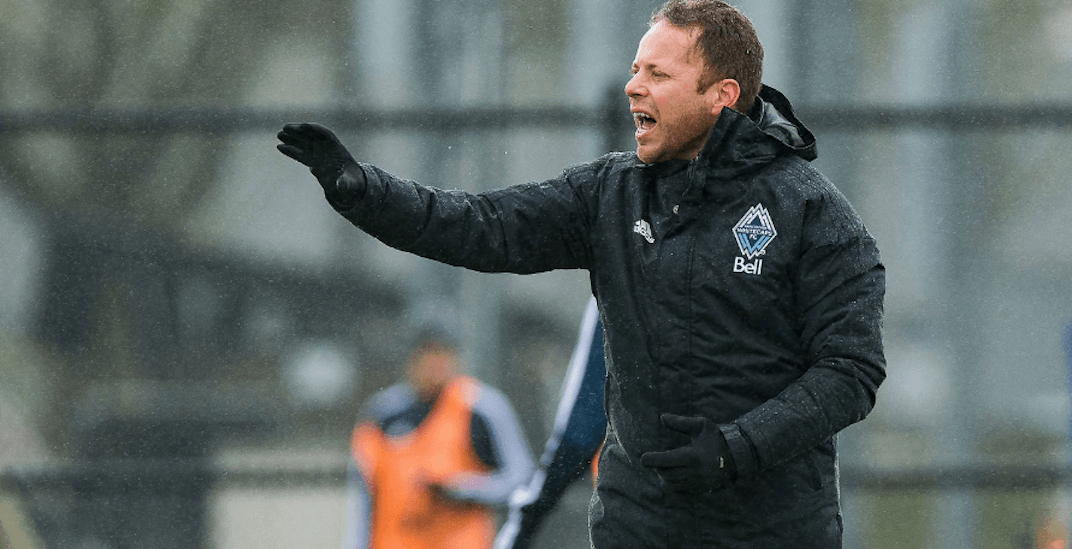 The Vancouver Whitecaps began training camp on Monday with a team that looked nothing like last year’s squad.

Eighteen players have departed since last season, but new player signings haven’t flooded in yet.

By the end of the season it was clear that the team was divided. The hot mess that was the season-ending media availability confirmed that. There were cliques and unhappy players.

Moves needed to be made.

New head coach Marc Dos Santos has come in and cleaned house. Players that didn’t want to be here aren’t here. But who does that leave?

Preseason training camp is when tactics and chemistry are formed, but the club is missing bodies.

There’s still time before the opening game of the MLS season on March 2 of course, but the team has yet to fill a number of holes created by departed players. Key players like Alphonso Davies, Kendall Waston, Kei Kamara, and Cristian Techera are gone, without obvious replacements so far.

“It’s not like going to Zara to buy a pair of jeans,” the head coach joked with reporters earlier this week. “There’s a big process. That’s what we’ve been working a lot on.”

The European transfer window closes on January 31, while the MLS window opens February 7.

“I’ve been all over the world, me and my staff,” said Dos Santos. “All the staff was incredibly involved in this window, and we knew that would be the case after so many players leaving. It’s going to be a team with a new face, dynamic, and a new type of model. There was a lot of work to be done.”

The Whitecaps have all three Designated Player spots available to them and although a Zlatan Ibrahimovic or Wayne Rooney type of player isn’t coming to Vancouver, they need to find somebody.

“Is there going to be a designated player? Yes. We’re close to one. We’re looking at a lot of players that can fill the gaps for the future of this club. We want to build a championship team, and not only buy a championship team.

The Whitecaps have made seven player acquisitions, but that’s a drop in the bucket when you consider 18 players have left town.

There are still several key areas where players need to be signed and brought in right away.

Leading goal-scorer Kei Kamara’s 14 goals are gone, and Erik Hurtado isn’t coming back either. Vancouver needs at least two top calibre goal-scorers who have height, pace, and can deliver goals in the crunch. Anthony Blondell and Theo Bair just aren’t going to cut it.

Every top striker needs someone setting the table and getting them the ball in open space. A successful offence usually has a brilliant number ten that gets everyone going. Yordy Reyna might be that go to guy, but he hasn’t been consistent.

Speed kills, and that’s exactly how Vancouver broke down opponents last season with Davies, Techera, and even Brek Shea. They’re all gone, and the goals are going to have to be replaced. The flanks need fresh legs that can create and leave opponents in the dust.

Kendal Waston was the captain, leader, and anchor on the back-end. He wanted out and got his wish. You can never half enough depth at centre-back, but Vancouver lacks it. Three more centre-backs would be ideal to set the tone, and command from the back.

Height, aggressiveness, and composure are imperative. You need someone who isn’t afraid to take on the oppositions best players and own them.

Vancouver is set in goal, but there’s a lot more that needs to be done. Andy Rose, Victor ‘PC’ Giro, Jon Erice, and Lass Bangoura are quality depth signings, but they don’t scream for first string minutes.

Maxime Crepeau was acquired from Montreal for $50,000 of Targeted Allocation Money and Vancouver’s third round pick in the 2020 MLS SuperDraft. Crépeau was previously with Dos Santos in Montreal. Vancouver’s new goalie coach, Youssef Dahha was also Crépeau’s goalie coach in Ottawa last season. Crépeau set a USL record with 15 clean sheets and he was named 2018 USL Goalkeeper of the Year.

Zac MacMath was traded to Vancouver from Colorado in exchange for midfielder Nicolás Mezquida and $100,000 of Targeted Allocated Money. MacMath is also going to compete for the no.1 spot in net. While he has more MLS experience than Crépeau does, MacMath only appeared in 11 matches in the last two seasons with the Rapids.

An Australian born and English raised box to box midfielder, Andy Rose will run his socks off. He returns to MLS after playing in the Scottish Premiership with Motherwell. The 28 year-old made 82 appearances for Seattle Sounders FC from 2012 – 2015. Vancouver sent $50,000 of General Allocation Money to Seattle for his MLS rights.

A 21-year-old up-and-coming Canadian centre-back with two international caps, Derek Cornelius is aggressive and speedy. At the moment, Cornelius and fellow Canadian international, Doneil Henry are the only centre-backs on Vancouver’s roster.

Victor ‘PC’ Giro is the latest in a long line of players Whitecaps FC have acquired from Orlando City SC. The 24-year-old Brazilian midfielder first caught Dos Santos’s eye at the 2012 Copa São Paulo de Futebol Junior. PC was playing for a U-20 Corinthians side.

Spending time in Spain’s top two divisions as well as France’s Ligue 1, Lass Bangoura is an explosive 26-year-old winger who can beat defenders one-on-one. Bangoura comes to Vancouver on a loan deal from La Liga club Rayo Vallecano de Madrid S.A.D with an option to purchase. The Guinean international has four goals in 34 appearances for his country.

Vancouver Whitecaps FC open the season on Saturday, March 2 vs Minnesota United FC. It is hoped by then that Dos Santos will have done his shopping.