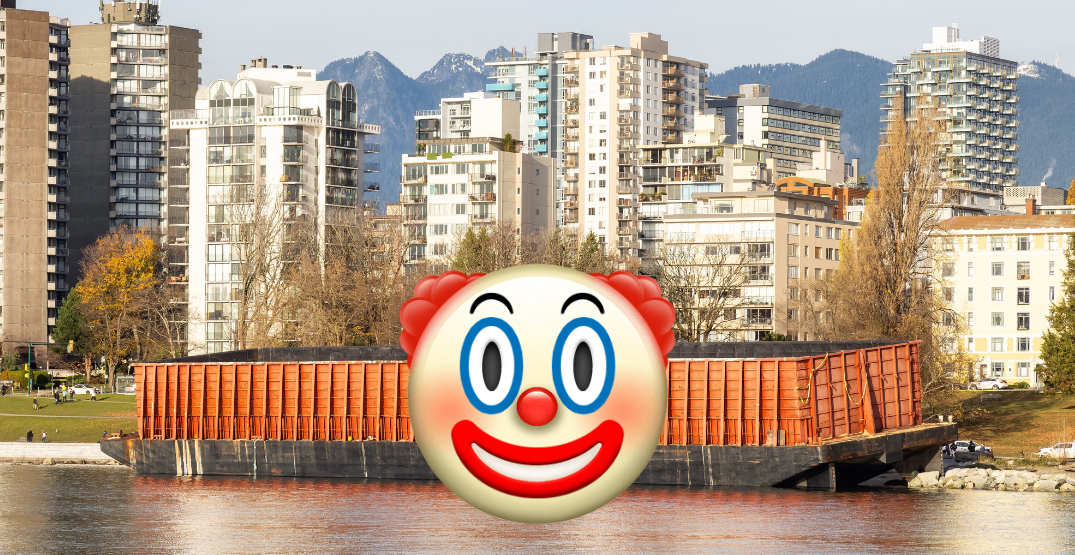 On Friday, April 1, you need to be savvy in navigating the world of digital media, lest you fall victim to a merciless April Fool’s joke.

This is the first spring since Vancouver’s free-spirited barge was unofficially installed in November 2021, and many in the city drew inspiration from it to pull off a little prank of their own.

Ryan Reynolds and the barge

On April 1, 102.7 The Peak “reported” that Ryan Reynolds and his wife Blake Lively had purchased the barge. It cited a convincing – but contrived – screengrab of a tweet.

The Barge in English Bay on Í7iy̓el̓shn beach has been purchased by @VancityReynolds and @blakelively. The details of the sale haven’t been made public, but in a tweet Ryan Reynolds said, “Since I was a young boy, I’ve always dreamed of putting my Aviation brand on a boat”. pic.twitter.com/Mcwokpcp9v

“Since I was a young boy, I’ve always dreamed of putting my Aviation brand on a boat,” the station quoted Ryan Reynolds as saying.

White Spot and the barge

We all love a Pirate Pak moment, and on April 1, White Spot announced a new offering.

Why head to the Barge Chilling Beach when it can come to you! In news of its planned dismantle, the infamous Barge will live on at White Spot as a Barge-themed Pirate Pak!

Available for ALL ages, at all locations. While quantities last! #WhiteSpot pic.twitter.com/I4N16R24fM

Cactus Club and the barge

We almost wanted this April Fool’s joke to be real. Catus Club announced what they called the pop-up event of the year – Bargé.

According to the restaurant group, Bargé by Cactus Club Cafe is set to be Vancouver’s “most innovative pop-up nightclub.”

And the restaurant went all out for this prank, directing social media users to a link in its bio that takes you to an entire write-up on the event, complete with food and beverage offerings, entertainment, and even schematics.

Daily Hive and the barge

Daily Hive was the first to “report” that the city was about to get a new “VANCOUVER” name sign installed in West Vancouver, inspired by the Hollywood sign.

Since the barge is set to be dismantled soon, Daily Hive reported that “Metal materials salvaged from the barge demolition process will be explored for re-use for the sign, with the metals melted and refined to create the sign parts for assembly.”

“It is estimated the steel barge’s value is just over $1 million, based on its weight of 1,800 tonnes and the price of steep scrap value currently hovering at $0.36 per pound,” wrote Daily Hive.