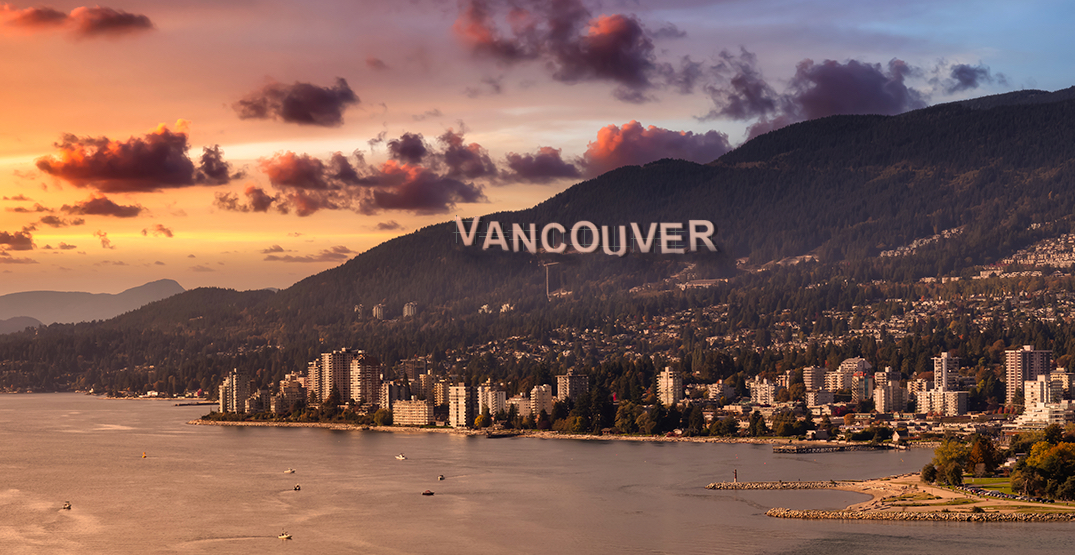 In an effort to provide the Metro Vancouver region with more attractions, the provincial and federal governments will install a massive “VANCOUVER” placemaking city destination name sign within the Upper Lands of West Vancouver, below the Cypress Mountain Resort area.

The landmark sign will be visible from across the Lower Mainland, with each giant letter that spells out the name of the region’s namesake city measuring 41 metres (135 ft) in height.

The announcement by Premier John Horgan, BC Finance Minister Selina Robinson, BC Tourism Minister Melanie Mark, and representatives of the federal and municipal governments was held at the Highview Lookout on Cypress Bowl Road during a press conference this morning.

“This new sign will provide all Metro Vancouverites with a symbol of pride to rally behind, and we know it will also be tourism attraction of its own, becoming an icon for the region over time,” said Horgan.

“We heard loud and clear from our partners and representatives in the tourism industry that big, serious steps need to be taken to reinvigorate our battered tourism industry, especially here in Metro Vancouver. There is no question that this region is the key economic and tourism hub of the province, and this project is just one part of our comprehensive, multi-faceted province-wide tourism recovery plan. This sign will most certainly be an incredibly productive way for achieving our end goals.” 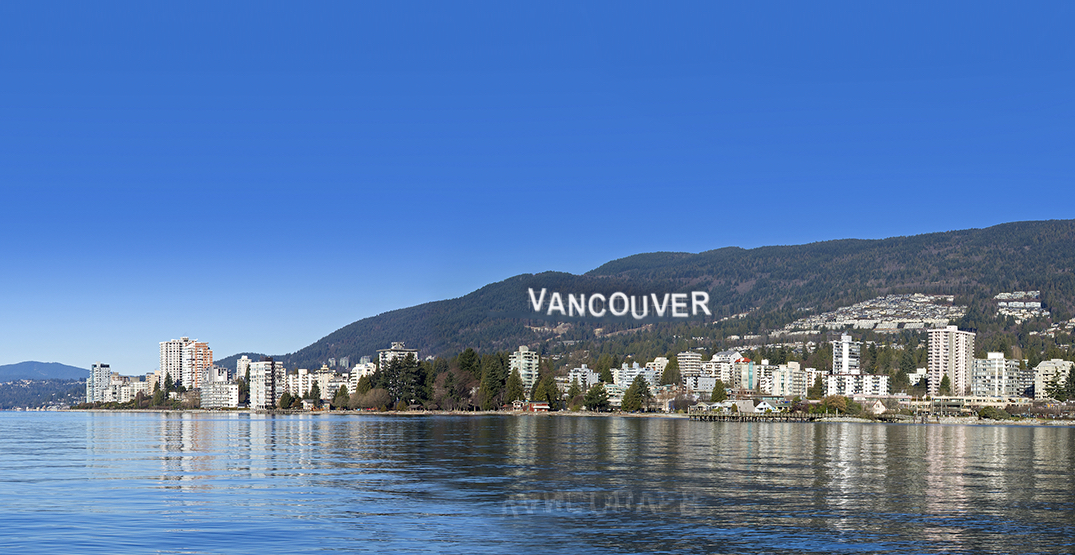 All nine letters of the sign will have a combined length of 320 metres (1,050 ft), which is equivalent to placing downtown Vancouver’s tallest building, the 201-metre (659-ft) Living Shangri-La tower, on its side, plus adding 40 more storeys horizontally.

This sign will be installed above the District of West Vancouver’s “1,200-ft contour” (366 metres), within an area designated as a Limited Use and Recreation Development Permit Area in the municipal government’s 2018 Official Community Plan. The site was previously logged.

The precise location will be above the highest elevation extent of British Pacific Properties’ future residential neighbourhoods of Cypress Village and Rodgers Creek (west of the existing British Properties neighbourhood), but just south of Cypress Provincial Park Picnic Area — between the second and third switchbacks of Cypress Bowl Road. The site’s elevation is about 549 metres (1,800 ft) above sea level.

British Pacific Properties has reached a tentative agreement with the provincial government to provide a nominal 99-year lease of $1.00 annually for the land required.

“This is the most significant milestone in the history of the British Properties since the construction of the Lions Gate Bridge,” said Cutler Beckett and James Norrington, co-chairs of the board for British Pacific Properties, in a joint statement. “We are proud to be a continuing part of the ever-evolving fabric of our community.” 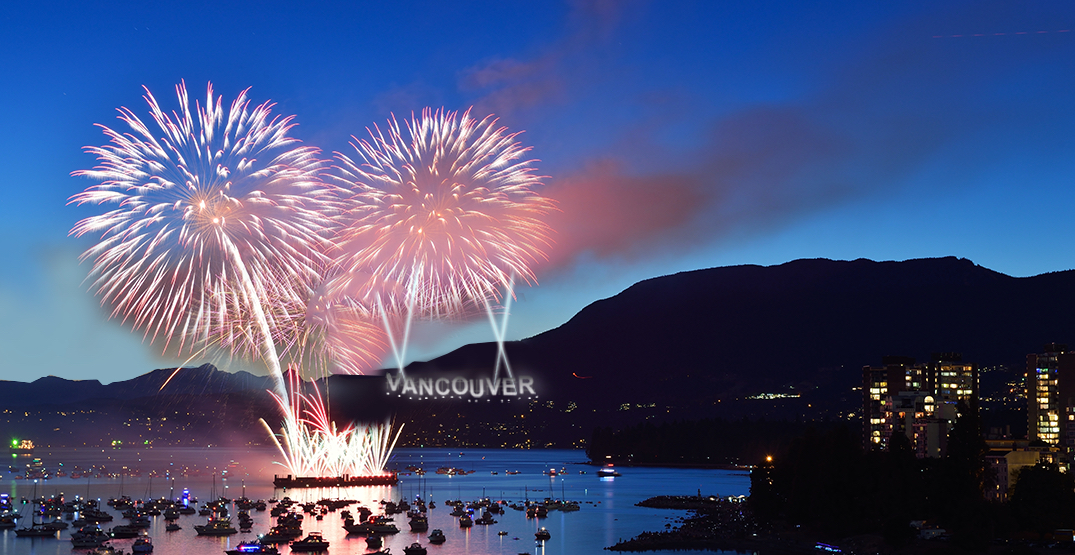 Artistic rendering of the massive VANCOUVER destination sign above the future British Pacific Properties neighbourhood in West Vancouver, during the Honda Celebration of Light fireworks. (Government of BC)

Each letter in block capital letters will have a white face overlooking the region. The sign face will also feature LED lights to allow for the sign to be illuminated during nighttime hours.

All of the letters combined will have a combined total of 2.3 million programmable LED lights, allowing for special occasion, multi-coloured light shows, just like the ever-changing exterior building lights of BC Place Stadium, Canada Place, and Science World.

The sign is roughly three times the height and length of the famous “HOLLYWOOD” sign in Los Angeles, which is where the provincial government found the inspiration for its idea.

“Anyone looking northwards will now know where they are at all times!” exclaimed Mark. “This will even be visible right away for visitors when they peer out through their plane windows prior to landing at Vancouver International Airport, or when cruise ships sail through Burrard Inlet to reach Canada Place.”

“We are working with our tourism partners and business community stakeholders on the best ways to capitalize the benefits of this sign. This is also a nod to Hollywood North, our support for our incredible local film industry.” 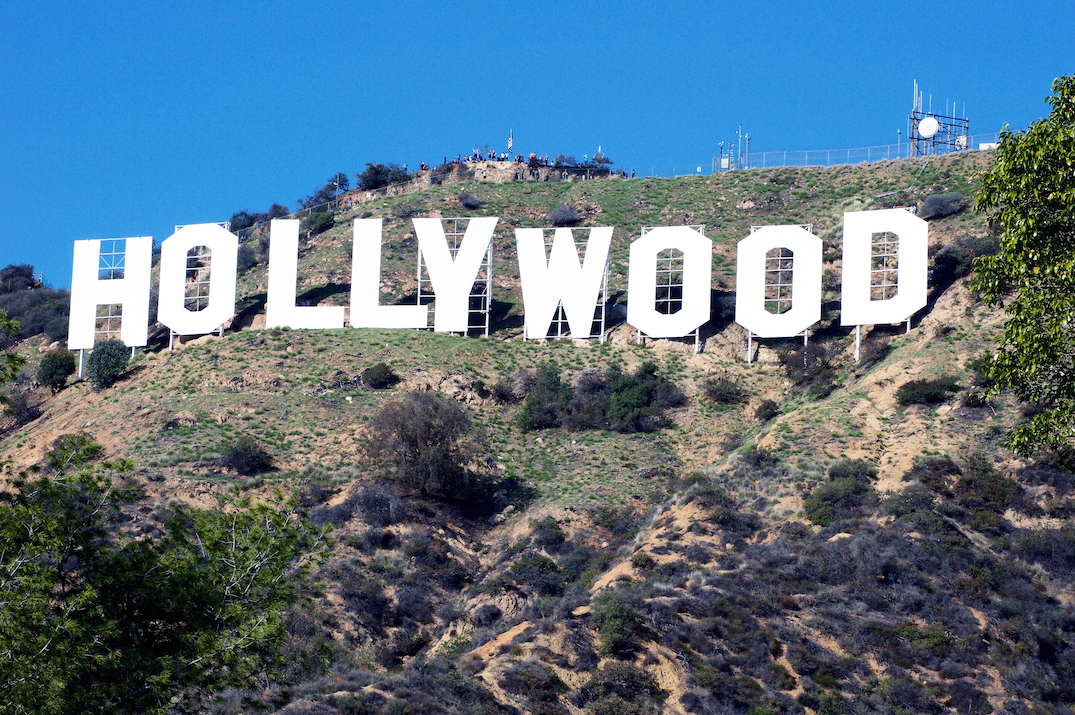 A major component of the project entails the installation of a twin wind turbine in the vicinity, but further up the slope within Cypress Mountain Resort area. The wind turbine will not only replenish the battery for the sign’s nighttime illumination, but also cover about 15% of the ski resort’s year-round electricity needs. This would be the North Shore mountains’ second wind turbine, after the 2009-built Eye of the Wind turbine on Grouse Mountain.

The sign will be durable, made out of high-quality recycled metals, and feature fire prevention and suppression systems. Concealed small openings on the sign’s solid face will also allow wind to stream through, effectively reducing the potential for damage during high wind events.

As well, the backside of the eight of the nine letters, facing north towards the ski run, will feature a vertical green wall, with lush vegetation designed for birds, and habitats for other animals and wildlife including honey bees and bats.

The backside of one letter, the letter A, will not have a green wall, but instead it will have a staircase system leading to a 25,000 sq ft free observation deck within the triangular-opening of the letter.

There will be a built-in capability for the future construction of a restaurant within the A letter’s opening, with 3,500 sq ft of indoor dining space and 1,500 sq ft of outdoor dining space, alongside a 1,800 sq ft gift shop and a downsized 18,200 sq ft free observation deck. An outdoor elevator-like vertical lift can also be installed on the backside of the letter A in the future to reach the observation deck and future restaurant and gift shop.

New hiking and walking trails will be created to establish the sign as a new mountainside destination to reach. The general public will be able to walk on pathways next to the base of the sign, and access the letter A’s staircase to reach the observation deck and restaurant.

Over the longer term, after the sign’s completion, the parking lot at Cypress Provincial Park Picnic Area, located at the third switchback of Cypress Bowl Road, could undergo a major expansion to support high-traffic visitation to the sign, and the restaurant addition.

Furthermore, given the expected ridership demand from both the sign attraction and the new British Pacific Properties neighbourhoods, TransLink will potentially begin a new bus route service between Park Royal and Cypress Mountain Resort, with stops along Cypress Bowl Road serving the neighbourhoods and the sign.

The entire project, including the wind turbine, is estimated to carry a total cost of $141 million, with the provincial and federal governments each contributing $65 million, and British Pacific Properties offering $1 million as a community amenity contribution. Cypress Mountain Resort will provide $10 million towards the turbine component and downslope power connections to the sign.

The District of West Vancouver will hold public consultation on the project next month. In early June 2022, district council is scheduled to deliberate and vote on its formal recommendation to the provincial government’s plan.

“We look forward to receiving input from West Vancouver residents over this economic development and cultural identity opportunity over the coming weeks,” said Mayor Mary-Ann Booth.

“This will be one of the single largest economic development investments made by senior governments in West Vancouver in decades.”

Following West Vancouver council’s expected show of support, the provincial government will begin the process of seeking a design and construction contractor in August 2022, with the aim of selecting a team by late fall.

Early works on site preparation and foundations for both the sign and wind turbine will begin in Spring 2023, with major construction on both components starting in Summer 2023.

Construction on the project is expected to support 500 on-site construction and off-site fabrication jobs, which will assist in economic recovery. The fabrication process will be entirely made in BC to keep economic benefits within the province.

The use of a Boeing CH-47 Chinook heavy-lift helicopter will be required to transport some of the materials to the site. 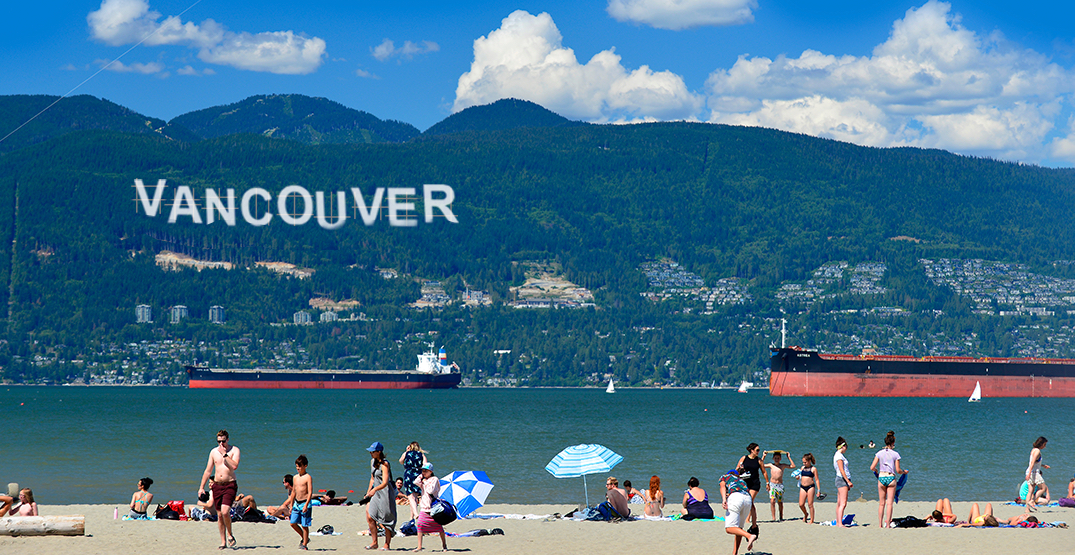 Upon completion, the provincial government will own the sign, and carry its annual operational and maintenance costs of about $300,000. Cypress Mountain Resort will own the turbine, and provide power to the sign free of charge.

“The federal government is always committed to providing British Columbia with its national fair share of funding,” said Jonathan Wilkinson, the MP of North Vancouver, in a statement.

“In this case, BC’s fair share of the funding from the national program towards creating new tourism attractions will be allocated towards the VANCOUVER destination sign project led by the provincial government. Your federal government is committed to making equitable investments in arts, culture, tourism, economic development, and infrastructure from coast to coast to coast.”

Although the region is set to gain a major new attraction, it is also expected to lose an unlikely makeshift attraction. In February, the City of Vancouver announced the so-called English Bay Barge will be deconstructed piece by piece over 12 to 15 weeks starting later this year, as an assessment deemed that it would be impossible to re-float the barge and tow it away.

Metal materials salvaged from the barge demolition process will be explored for re-use for the sign, with the metals melted and refined to create the sign parts for assembly.

It is estimated the steel barge’s value is just over $1 million, based on its weight of 1,800 tonnes and the price of steep scrap value currently hovering at $0.36 per pound.

The barge has become something of a popular sightseeing and Instagrammable spot ever since it washed up late last year during a wind storm.

“We know Metro Vancouver residents are in need of attractions other than a mangled barge stranded on the rocks at Sunset Beach,” quipped Robinson during the press conference. “And after careful review, your provincial government considers this project and location to be a sound investment.”

The provincial government also considered installing the sign on Grouse Mountain, but it was later determined that only a substantially smaller sign could be achieved, and potentially at an equal or higher cost. As well, the sign at Grouse Mountain would see significantly more days of being obscured by cloud cover, given that the location considered was at the very bottom of Grouse Mountain Resort’s The Cut ski run — just south of the Screaming Eagle high-speed quad chair. The Grouse Mountain location that was rejected by a provincial government technical analysis was about 890 metres (2,920 ft) above sea level — the lowest point of Grouse’s ski terrain, but 341 metres (1,119 ft) higher than the chosen Cypress location.

In the late 2000s, VANOC, the organizing committee of the Vancouver 2010 Winter Olympics, conceived a comprehensive Look of the Games concept of blanketing the city with its Olympic branded decorations. This included the potential idea of installing temporary giant illuminated Olympic rings at the top of Grouse Mountain that could be seen across Metro Vancouver, similar to glowing Olympic rings on the mountainside overlooking Salt Lake City during the 2002 Winter Games. However, the Look of the Games budget was significantly slashed due to the financial impact of the 2008 recession. 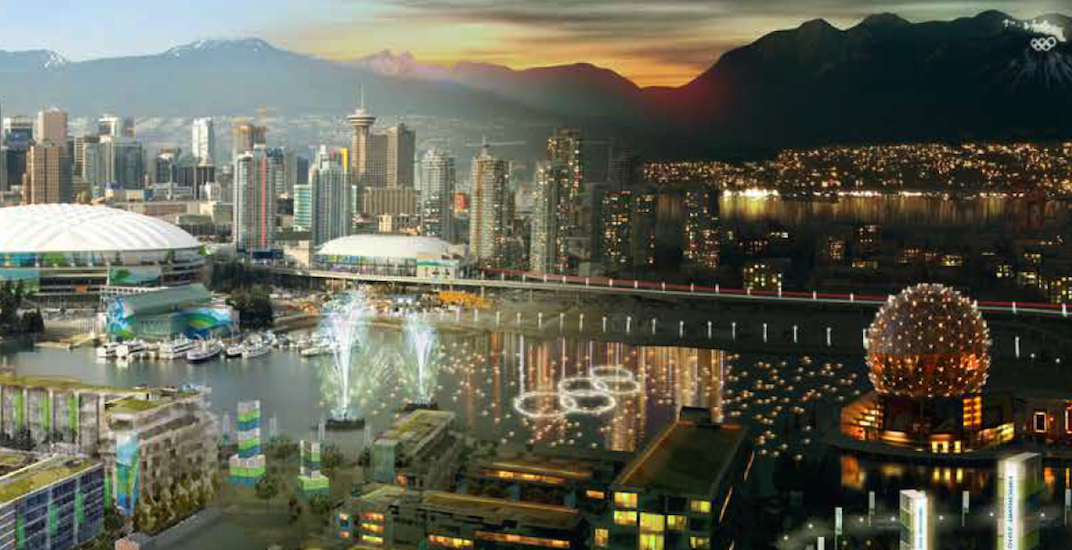 Olympic rings atop Grouse Mountain and in the waters of False Creek were some of the original ‘Look of the Games’ concepts envisioned for Vancouver 2010, but cancelled due to the recession. (VANOC) 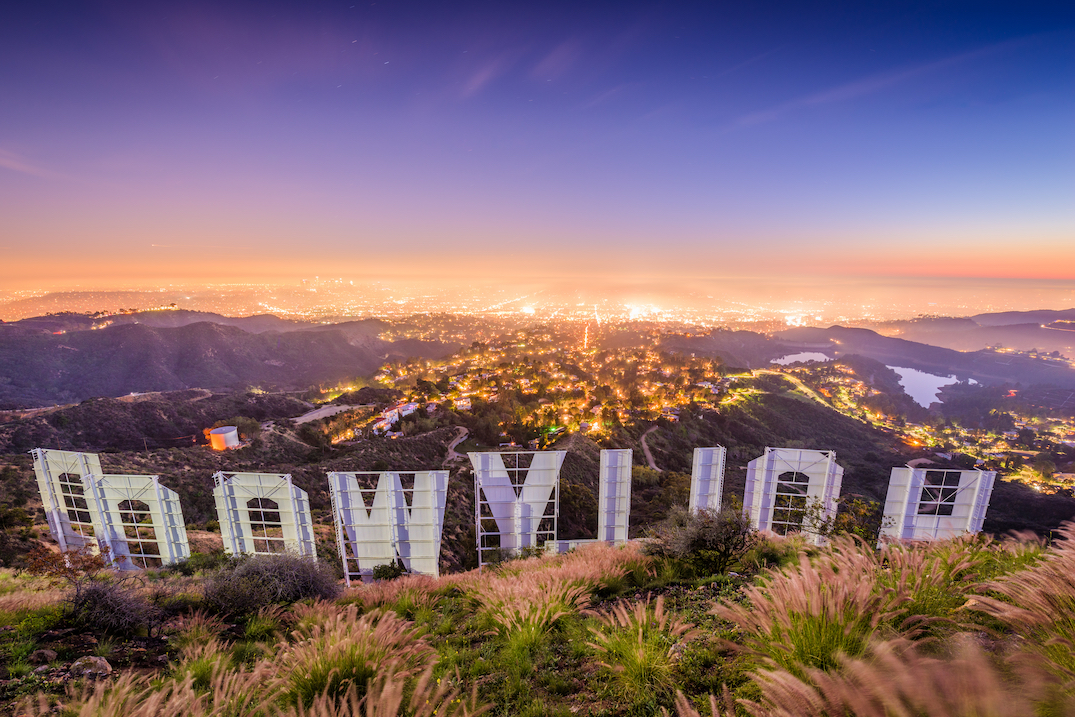