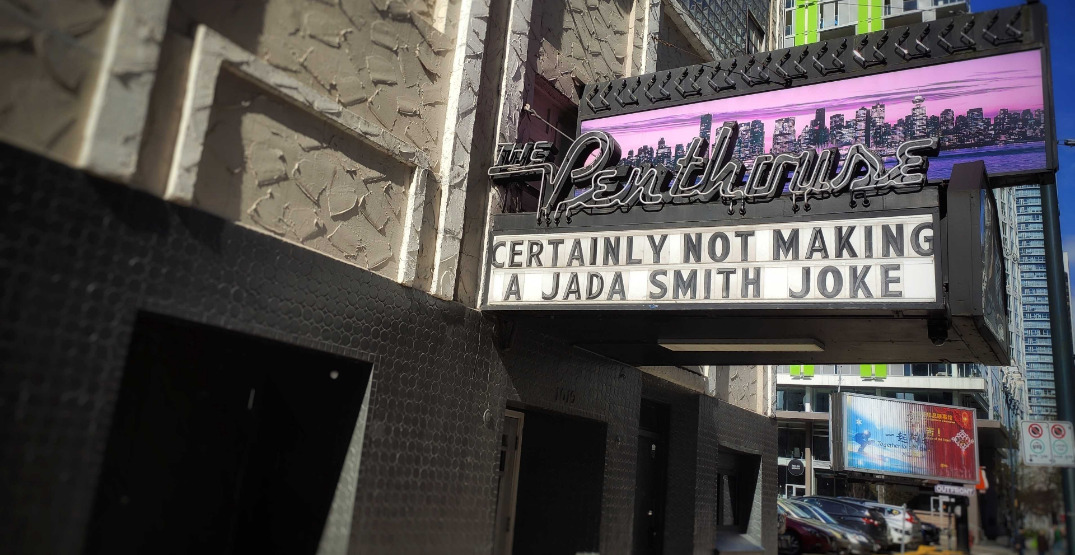 Benjamin Jackson is a bar manager and the person behind the marquee sign at Vancouver’s Penthouse Night Club, and his latest work is a reference to the instantly famous Will Smith Oscars incident.

Navigating the controversial moment that saw Smith slap Chris Rock is a tough thing to do considering how divisive a topic it is on social media, but the Vancouver strip club managed to do it in a way that was respectful to all parties involved while tapping into the viral nature of that heated moment.

The sign reads, “Certainly not making a Jada Smith joke.”

No thank you 🙅🏻‍♂️ pic.twitter.com/I31DCXYU9M

The Penthouse is no stranger to controversial topics. After the breaching of the US Capitol Building last year, Jackson put a message on the marquee that read, “Better security than the US Capitol.”

Earlier this month, on the heels of the BC Ministry of Health announcing that the provincial mask mandate was being dropped, the marquee read, “Masks & clothing optional.”

Some other classics include, ‘There’s some poles in this house,’ ‘Nobody hold 2022s beer,’ ‘No glory holes stop asking,’ and ‘Tits the season.’

The Penthouse is located at 1019 Seymour Street, and its amateur contest night is this Thursday at 9 pm.