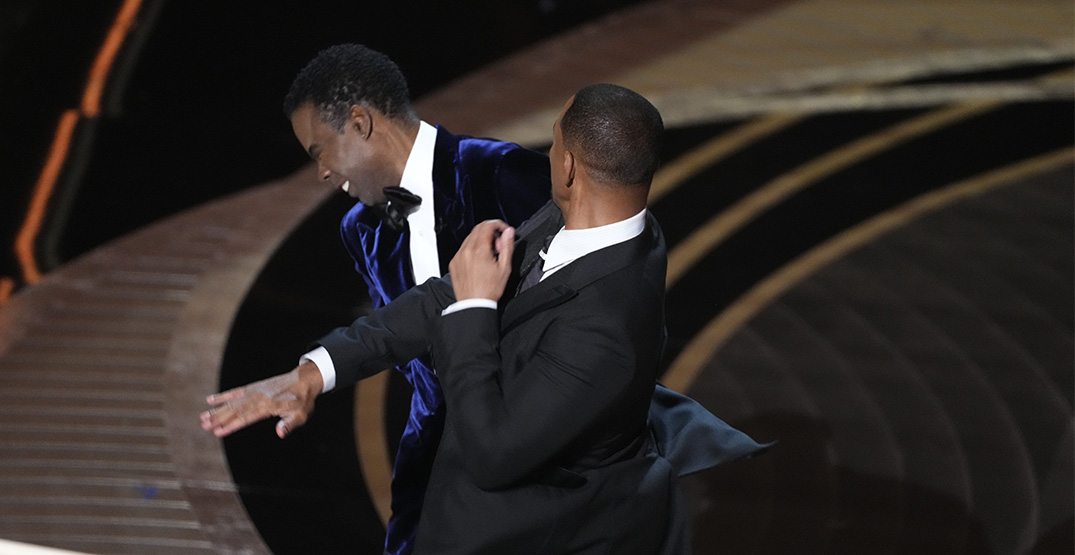 It was the slap seen around the world.

Unless you were already fast asleep and not scrolling through the Twitter firestorm, in a shocking turn of events, Will Smith slapped Chris Rock at the Oscars Sunday night.

Here’s a quick recap — Chris Rock made a joke about Jada Pinkett-Smith’s alopecia, something she has talked publicly about on social media, to which husband Smith took offence and promptly went on stage to give Rock a big live TV slap.

If you haven’t seen the footage, give it a watch here.

For context, Rock has been criticized for his degrading takes on Black women before. And this isn’t his first time picking on Pinkett-Smith. At the 2016 Oscars, during the #oscarssowhite controversy, Pinkett-Smith decided to sit out in protest. Rock joked that she was only boycotting because she wasn’t invited.

Attendees and fans watching the 94th Academy Awards were stunned at first, not sure if what they were seeing was a bit, or real.

But when Smith returned to his seat and began yelling “Keep my wife’s name out your f*cking mouth,” people knew it was no staged joke.

And from there, the Twitter hot takes rolled in.

The discourse has certainly been abundant.

we finna get thinkpieced straight to the ancestral plane this week

There are people who pointed out the assault and toxic masculinity displayed in the incident.

That speech was so confusing … making that about protecting your family “like Richard Williams”?! And was Chris Rock supposed to be the devil, there?

I’m tripping that you can assault someone on live television on stage at the Oscars and just take your seat and watch the rest of the show.

Seeing a lot of hot takes on what happened between Chris Rock and Will Smith at #Oscars and I GET IT.

It is the most intense thing to ever happen on that stage.

But the whole incident, from top to bottom, was toxic masculinity. Neither of those dudes are the good guy here.

Comedian Judd Apatow went so far as to say Smith “could have killed” Rock.

After reading through all the hot takes, I have come to the conclusion that this right here is the hottest take of the night pic.twitter.com/tGYVEh2PdJ

Others defended Smith’s actions and pointed out how Black women have been “unprotected and the butt of the joke” for too long.

“violence isn’t the answer” when I lived in the Philippines, a classmate called me n***er while we were on the way to school. I had a textbook in my hand & rocked his shit so hard that he asked his mom to switch shuttles & never spoke to me again. violence WAS the answer actually pic.twitter.com/QqAGoxSmYC

Some Twitter users pointed out the hypocrisy of Rock’s joke since the comedian made a documentary titled Good Hair about Black women’s relationship with their hair.

… it’s ironic how Chris Rock made a whole documentary about Black women called “Good Hair” but then gets smacked for making fun of a Black woman’s hair.

Jaden Smith also tweeted in support of his dad.

And That’s How We Do It

Oscars was where a Native American woman was boo’d while asking for equality. Where Blackface and Yellowface was celebrated. Where Michael Moore was boo’d for trying to stop genocide in Iraq and child rapists were given awards. Can we not do this. https://t.co/W9uoZOeH6R

And others highlighted that there are multiple truths about what happened last night.

Alopecia is a painful experience that many Black women go through and should not be joked about.

The concept of being ‘the protector’ can be a form of toxic masculinity.

Black women are rarely protected and deserve to be protected.

And of course, there were the people who resorted to jokes and memes to cope with what they just saw.

All of us watching what just went down between Will, Chris and Jada: #Oscars pic.twitter.com/g34XV10SV7

That’s why he got sent to Bel-Air in the first place. Shit like that.

Suddenly Chris rock shows up in the in memoriam

While the debate is ongoing about whether what Smith did was warranted or not, there’s one thing fans can all agree on.

We are all Lupita Nyong’o.

we are all lupita pic.twitter.com/3ZwASoGqHF