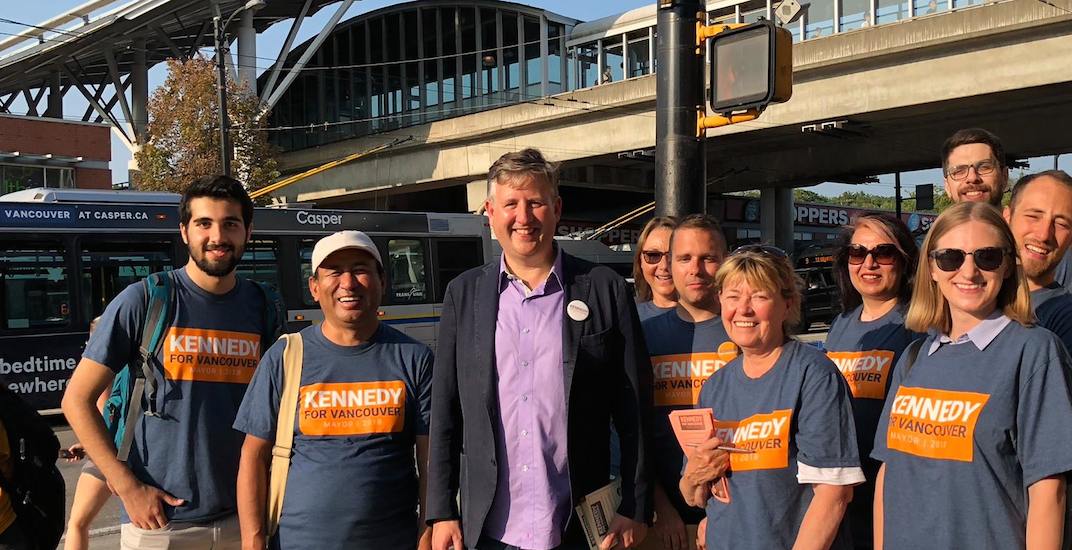 Vancouver’s newly elected mayor says he will do what he can to help his counterpart in Surrey enact SkyTrain extension plans instead of street-level LRT.

In a sit-down interview with Daily Hive Monday morning, Kennedy Stewart said that he will provide re-elected Surrey Mayor Doug McCallum with support on convincing TransLink’s Mayors’ Council to cancel the controversial Surrey Newton-Guildford (SNG) LRT line and advance the Fraser Highway project between King George Station and Langley Centre as an extension of the existing SkyTrain network.

“A big part of [McCallum’s] campaign was that he didn’t want light rail there,” said Stewart. “He wants SkyTrain, and I respect the will of the local voters, and I said I would support him in the Mayors’ Council.”

“I think that’s what local voters want and I’ll try to support him in that because I want my own SkyTrain to go to UBC, and that’s a regional project.”

He adds that there will be new negotiations with the federal and provincial governments on funding to acquire the necessary funding increase to support the higher cost of SkyTrain in Surrey and the second phase of the Millennium Line’s Broadway Extension between Arbutus Street and UBC.

“I do see the regional thing of helping local mayors accomplish what they want to accomplish, but also try to make it work regionally.”

The Mayors’ Council uses weighted voting based on population to approve or reject TransLink’s long-term strategies and investment plans. Between Stewart and McCallum, both mayors have a total of 58 weighted votes of the total of 134 weighted votes amongst all 23 municipal governments and jurisdictions in Metro Vancouver. The support from a single large municipality such as Burnaby’s new mayor, Mike Hurley, with his 12 weighted votes, would send the decision to a majority.

The ‘LRT vs. SkyTrain’ debate was one of the largest issues in the Surrey civic election, with the incumbent Surrey First party led by Tom Gill maintaining there was no turning back on SNG LRT.

But McCallum promised frustrated voters that all of the planned LRT projects will be cancelled in favour of SkyTrain extensions.

Map of the new station locations for the SkyTrain Expo Line extension along the Fraser Highway. (TransLink)

Construction on the SNG LRT project on 104 Avenue and King George Boulevard is scheduled to begin in 2020 for an opening in 2024. The project has a budget of $1.65 billion, with $483.8 million provided by the federal government and TransLink covering the remaining share of $1.12 billion.

However, the project has only entered its procurement phase at this time; no construction contracts have been signed.

The latest estimated cost for SkyTrain on the Fraser Highway is $2.9 billion, which is about $900 million more than LRT. Both estimated costs include a highly generous 25% contingency fund.

Last year, the BC NDP provincial government cancelled the George Massey Tunnel replacement during a similar planning and procurement phase for the new bridge project.