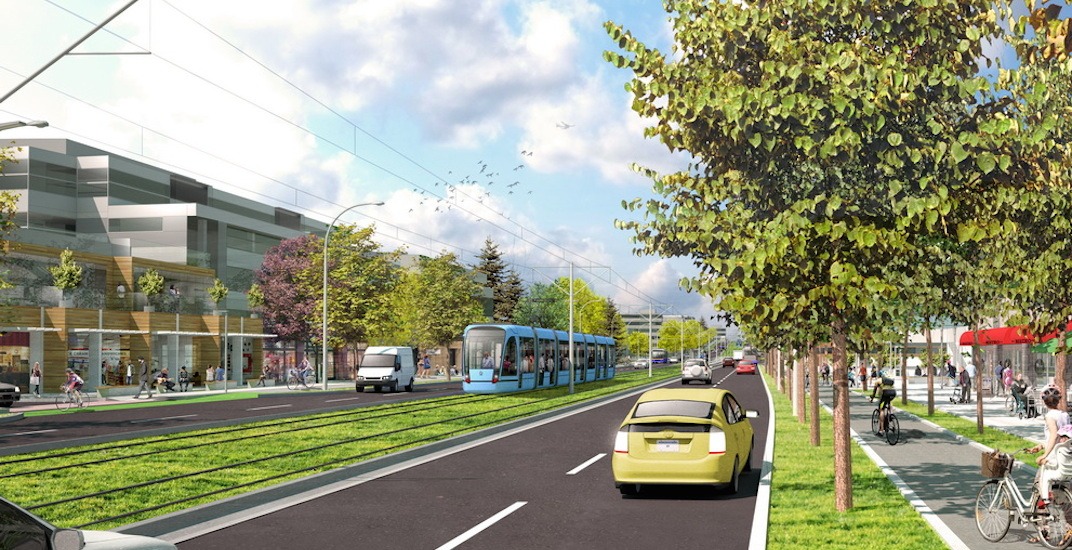 Written for Daily Hive by Sam de Groot, a lawyer in Vancouver with a longstanding interest in urban design and transport.

It’s time to call time out on Surrey’s light rail transit (LRT) plan. In 2012, TransLink studied the costs and benefits of the various transit expansion options in Surrey, and LRT was found to be the worst option.

We need to heed that pivotal study that clearly identifies the gross shortcomings of the LRT option.

First of all, LRT is not that much cheaper than SkyTrain over the longer term because LRT has higher operating costs and lower fare revenue due to the forecast of lower ridership from its slower speeds through city streets. For instance, LRT on King George Boulevard to Newton, 104th Avenue to Guildford and Fraser Highway to Langley would have a net present cost of $1.63 billion.

This is all in 2010 dollars, with the project facing significant cost increases ever since these initial estimates.

It is no surprise then that the estimated cost-benefit ratio of the LRT option is a dismal 0.69 compared to 1.30 for the BRT option and 1.45 for the SkyTrain-BRT option.

A number below 1.0 means that for every dollar invested in the project, less than a dollar of benefit is realized including all the non-cash benefits like travel time savings and environmental benefits. Calculating cost-benefit ratios is no exact science, but it is useful for comparisons, and clearly LRT is the worst option. 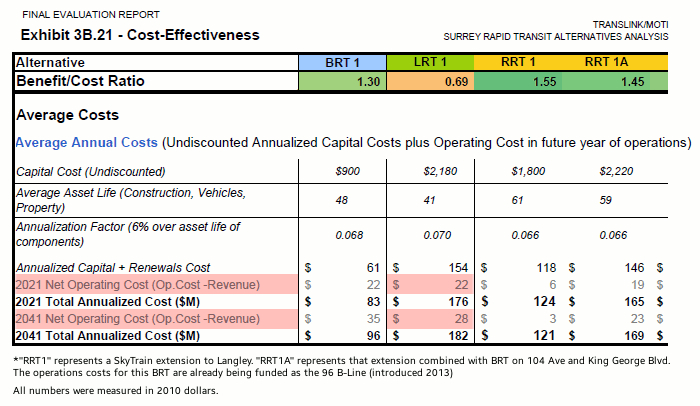 So why does the City of Surrey want the worst option? City officials and politicians have described LRT as a tool to turn Surrey into an urban, pedestrian-friendly, ‘proper’ city.

They show photos of light rail trains floating through old European town squares and describe the civilized delight in strolling off a train, having a coffee at a sidewalk café and then strolling back on. It’s true that this does sound delightful, but unfortunately, it is mostly nonsense.

LRT does not create that pedestrian-friendly, urban environment that so appeals to Surrey’s municipal officials. Those European towns that have LRT slowly snaking through their central town squares were built long before there was any motorized transport of any kind.

And it’s not as if the LRT makes those streets or squares better. The streets in Strasbourg with LRT are not nicer than the streets without the rails. In fact, they are a bit less nice.

The elegance of the trains that slowly wend along ancient streets will not be reproduced in Surrey. Those trains are traveling at 15 km/h through those streets and squares because they are narrow and full of pedestrians. They can do that because they speed up in the newer areas of town and because those European towns are tiny. Three or four Strasbourgs could fit within Surrey. 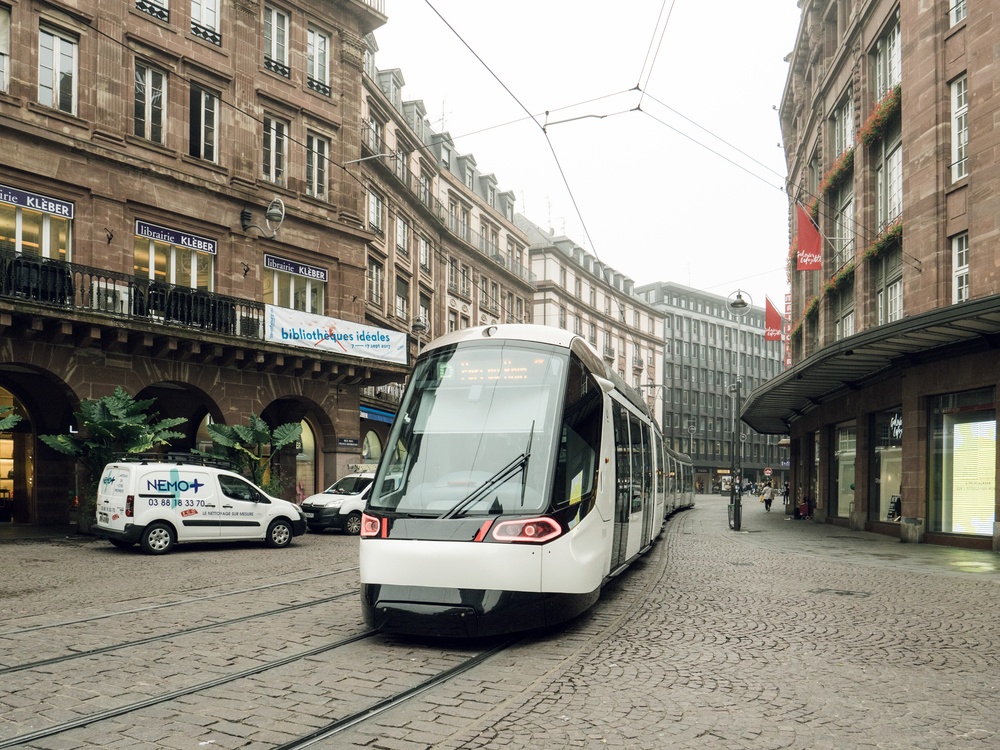 Now if Surrey wants to build some Strasbourgs within it, I would be all for it. But you don’t need LRT to do it. In fact, LRT really has nothing to do with this obsession over European urban planning.

The reality of LRT in Surrey is that the trains will have to go well faster than 15 km/hr or else no one will ride them. And since LRT will attract fewer riders than SkyTrain, there will actually be fewer people on the street to patronize those cafes.

Nor will LRT make it seem like there are more people on the street by keeping them at ground level. Those people will be riding trains mostly in median reservations mostly at 50 km/hr. They will add no more eyes on the street than those currently riding the bus.

The placemaking potential of LRT is well illustrated by our neighbours.

In areas of Seattle, Portland and Calgary that are most like Surrey, LRT has not improved the street one bit.

Seattle has street level LRT along Martin Luther King Way, and it has hardly turned that street into a flaneurs’ paradise. Around Columbia City Station, there has been some new development, but it is no Strasbourg.

And away from stations, at Orca Street or Graham Street for instance, it is obvious that LRT has not improved this street at all. Ditto in Portland along East Burnside Street and Calgary along 36th Street NE.

This is the equivalent width of more than 10 automobile lanes. To call any of this pedestrian friendly is ridiculous. 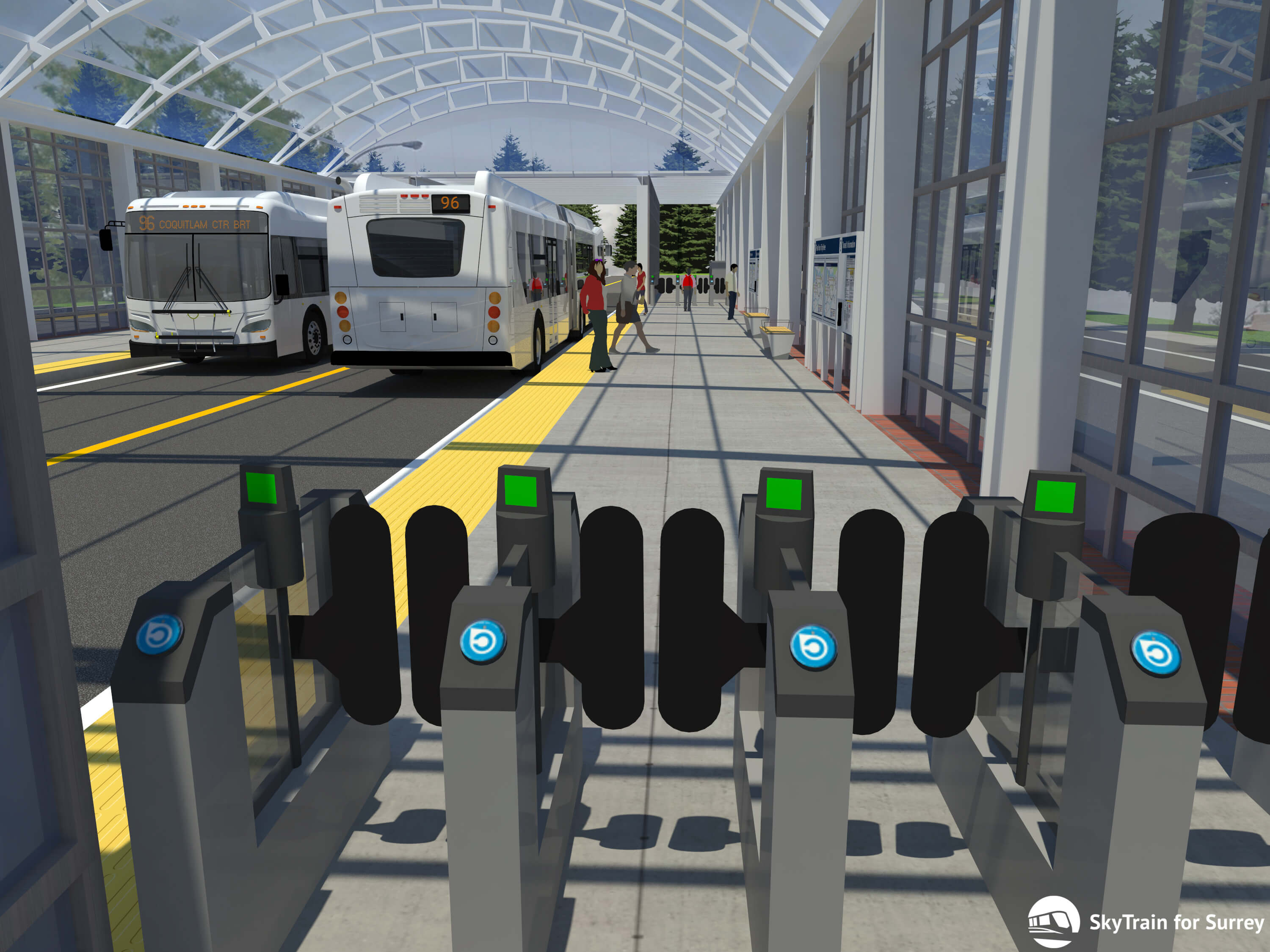 Artistic rendering of a Bus Rapid Transit station in Surrey. (SkyTrain For Surrey)

Running BRT on King George would have the same problems as LRT (albeit at a much lower cost), so I would not advocate that either.

Eventually, Surrey will need SkyTrain along Fraser Highway to Langley and a second King George Line that runs underground. And that will be money well spent.

That way, King George could be narrowed to a maximum of six automobile lanes and two bike lanes along its whole length. That, with the rapid transit, would put King George on a better footing to becoming an urban street. So over the shorter term, TransLink needs to proceed with the SkyTrain extension to Langley and bus improvements along King George Boulevard and 104th to wait for the completion of the future-proof system.

This region has had the benefit of being late to some transportation fads and thus avoided some of the bad, expensive ones. We never built a freeway through downtown Vancouver, for instance.

However, this pattern seems to be repeating itself for street-level LRT. Portland, Seattle, and Calgary have recently built or planned new LRT lines, but those lines have been nearly entirely grade separated with no ground-level LRT running in the streets.

These cities seem to have deeply regretted their earlier decisions to build their initial rail rapid transit projects as street-level LRT, and have stopped building it. Their lessons are something we need to give much attention to.