This is Part One of ‘Surrey LRT and the Region’ – a two-part Daily Hive editorial feature series on the Surrey Light Rail Transit project on a regional economic context. Click here to read Part Two.

The South of Fraser LRT project is solely about shaping Surrey into the “ideal” city the current governing municipal party wants it to be.

Yes, there is a barely veiled layer of contempt within Surrey over the economic success of Vancouver and, to an extent, even other suburban municipalities with major SkyTrain-oriented regional city centres and town centres.

For the past two decades, its leaders have continuously boasted about Surrey’s “destiny” of becoming a larger city than Vancouver – in terms of population – and economically rivalling the current metropolitan core areas: the downtown Vancouver peninsula and Central Broadway Corridor.

But you will never see Mississauga pounding its chest over its intent of toppling Toronto.

However, Surrey’s growth projections are based on its land mass, which is of course determined by arbitrary municipal jurisdictional borders.

The city of Surrey is 316-sq-km in size and it currently has a population of 518,000. But if you combine the areas of the cities of Vancouver (115-sq-km, 631,000 people), Burnaby (99-sq-km, 233,000 people), and Richmond (129-sq-km, 198,000 people), which are together an exceptionally interlinked economic ecosystem (based on Statistics Canada data on place of work), it has a combined land base of 343-sq-km (similar to Surrey) and a total population of 1.062 million (it is more than this figure if we include West Vancouver and North Vancouver, but the land mass would not match Surrey’s).

This comparison is apt, with both Surrey and Vancouver-Burnaby-Richmond areas having comparable tracks of Agricultural Land Reserve (ALR) and other non-urban lands. 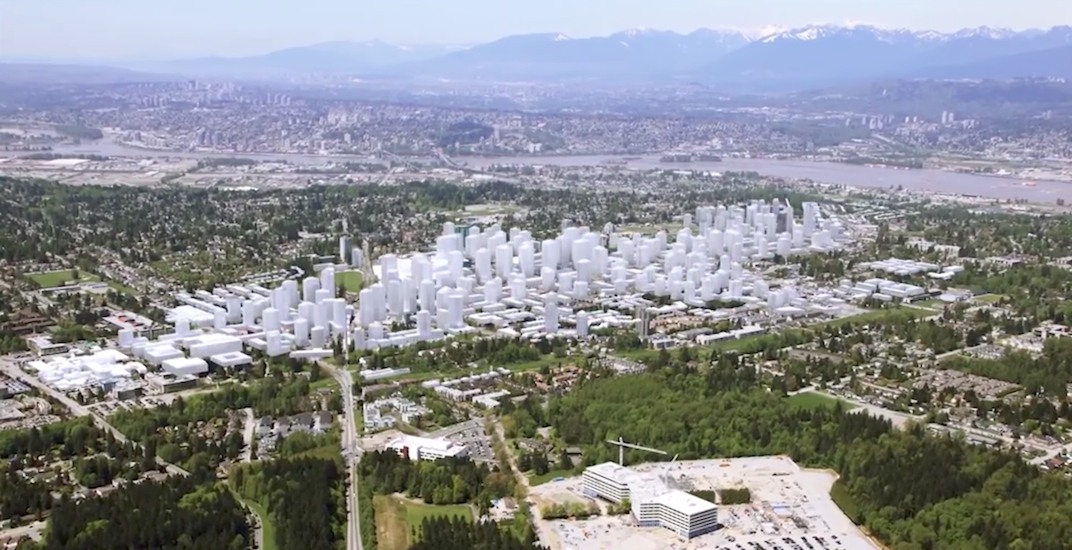 That provides a combined population of 1.36 million in about 20 years from now. Meanwhile, Surrey on its own is projected to rise to 740,000.

“Surrey is the destination, not a thoroughfare to somewhere else”

The City of Surrey has repeatedly advocated that the South of Fraser light rail transit project – the first line along 104 Avenue and King George Boulevard from Guildford Town Centre to Newton Exchange and the second line along Fraser Highway from King George Station to Langley – is all about attracting property development.

Any real improvement to transportation mobility is a distant secondary consideration for the municipal and business leaders of Surrey.

The planned LRT projects have streetcar-like characteristics with stations clustered close together, no grade separation (apart from a short 3.5-km-long elevated section over the Serpentine Valley and within Langley Centre for the future Fraser Highway project), and trains running through traffic intersections.

“If you simply want to transport people at the fastest speed, and… affordability [of the system] is not a consideration, then by all means, build SkyTrain,” Paul Lee, the City of Surrey’s LRT project program manager, told The Runner earlier this year. “A fast train is not what we want.”

In an open letter addressed to the Mayors’ Council that was shared with Daily Hive early this year, Surrey Board of Trade CEO Anita Huberman elaborated on this same reasoning, supporting ground-level light rail transit instead of expanding existing SkyTrain infrastructure.

In essence, LRT is about keeping residents and businesses within Surrey, instead of sending them upstream into Vancouver.

“The [SkyTrain] stations are relatively far apart and the ability for riders to view commercial options is minimized,” said Huberman. “The purpose would be to move people from one far distant point into the city of Vancouver Hub. We have determined that Surrey is the destination, not a thoroughfare to somewhere else.”

“The LRT provides an opportunity to consider how to manage the growth, where to densify, how to move people, and how to create commercial space while achieving an attractive streetscape… LRT sparks development along its corridors, a mid-rise, medium density, mixed-use type of development that will attract both families and business to the area while also maintaining affordability.”

Municipal governments are, in a sense, isolationist, and the goals set out by one municipality for a project funded by regional taxpayers highlights this narrow paradigm.

Despite being one of the smallest and most compact major urban regions in North America in terms of geographic size, Metro Vancouver’s municipal officials have the enduring habit of failing to think regionally.

Here is a breakdown of the actual geographic size of Metro Vancouver.

The land base of Canada’s third largest urban region – home to 2.5 million residents – is 2,870-sq-km, which is 40% the size of the Greater Toronto Area and roughly 67% the size of Greater Montreal.

But the region is even smaller when you take away the vast tracks of land that are deemed to be a part of North Shore mountains’ reservoir watersheds, ALR, regional parks, floodplains and wetlands, and other ecologically-sensitive areas. When that is all accounted for, Metro Vancouver has just 701-sq-km of urban land – developable areas for residential, commercial, and industrial activity.

To put this in further perspective, the island city-state of Singapore has an area of just 722-sq-km.

Metro Vancouver is, most certainly, a tiny region.

City of Toronto vs. all of Metro Vancouver 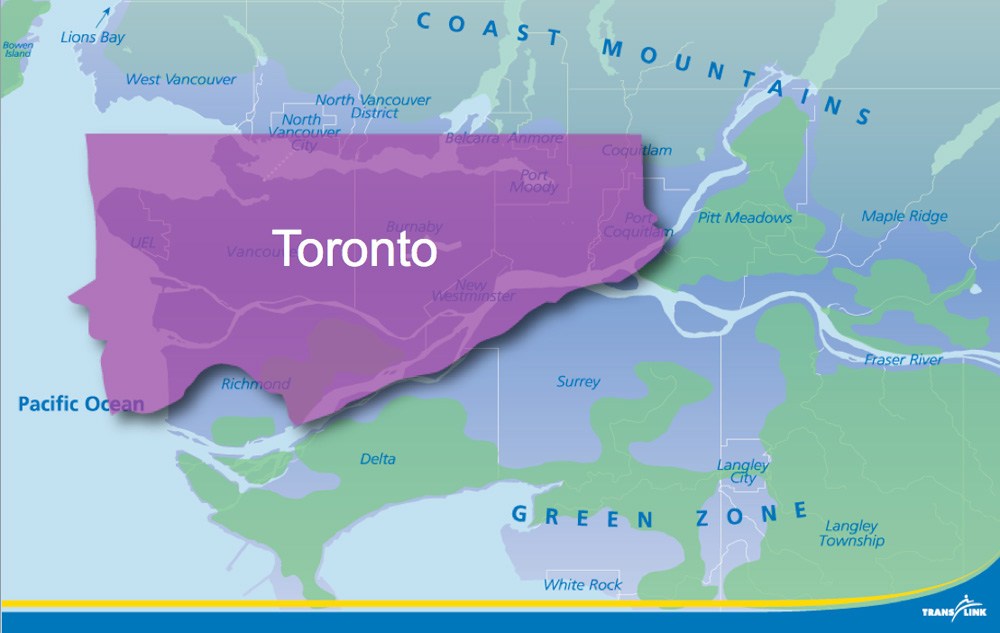 Size comparison: city of Toronto vs. all of Metro Vancouver. (TransLink)

City of Montreal vs. all of Metro Vancouver 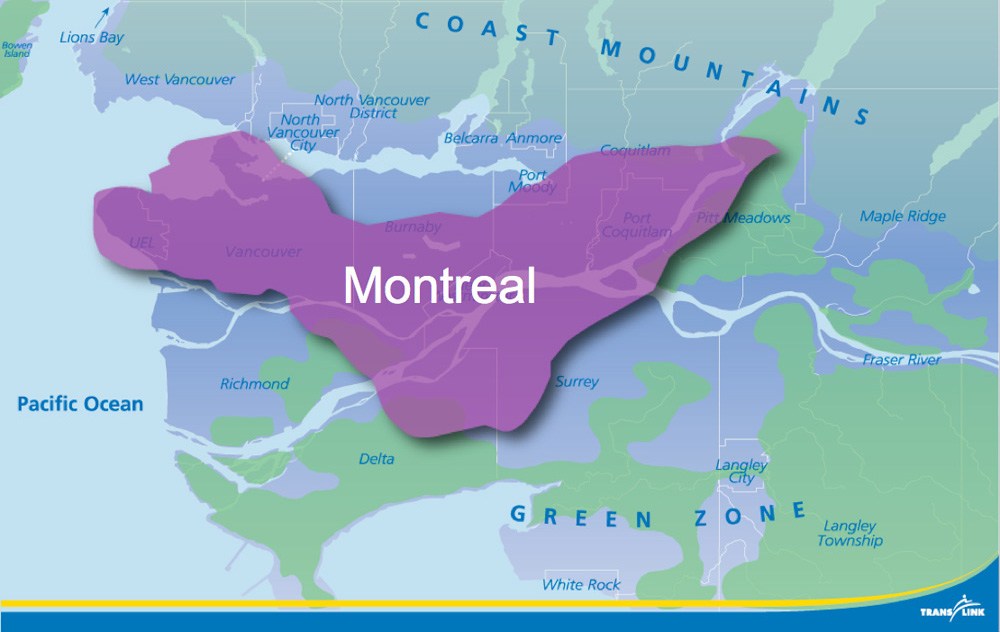 Size comparison: city of Montreal vs. all of Metro Vancouver. (TransLink)

Yet despite the efficiencies that are generally allowed by a smaller land area, the region lacks a cohesive economic development strategy and an unfaltering transportation plan that is not tampered by politics.

Instead, there are 21 municipal governments, with each jurisdiction engaged in a race-to-the-bottom dogfight over regional economic scraps instead of genuinely working together to attract international investment and develop regionally sensible infrastructure.

Municipal governments cannot be blamed for their selfish instincts, creating and enforcing arbitrary jurisdictional borders, as these are a means for their own bureaucratic and political survival. These creatures of the provincial government have long complained that they have highly limited revenue sources given that they only have access to fees and property taxes.

In comparison, municipal governments in Australia, Europe, and the United States can also rely on revenues from income and sales taxes.

With an over-reliance on property taxes, Canadians have some of the highest rates of property tax in the world – about twice the average of countries in the Organization for Economic Co-operation and Development.

And of course, the key driver of increasing property taxes is creating catalysts for more property development.

Over the past two decades, Metro Vancouver’s growth has been generally moulded by the MVRD’s 1996 Livable Region Strategic Plan (LRSP), which lays out land uses, green spaces, and growth centres, such as the Region’s Metropolitan Core (downtown Vancouver and Central Broadway) and Regional Town Centres, such as Metrotown, Richmond City Centre, New Westminster, Lonsdale, Coquitlam Centre, and Surrey’s Whalley.

When the LRSP was revised and turned into the Regional Growth Strategy in 2011, Whalley was elevated into the so-called Surrey Metro Core – one notch higher than the status of a Regional Town Centre, but just below the Metropolitan Core. The Surrey Metro Core is intended to be the “centre of activity South of the Fraser,” but downtown Vancouver and Central Broadway will still be “The Region’s Downtown.” 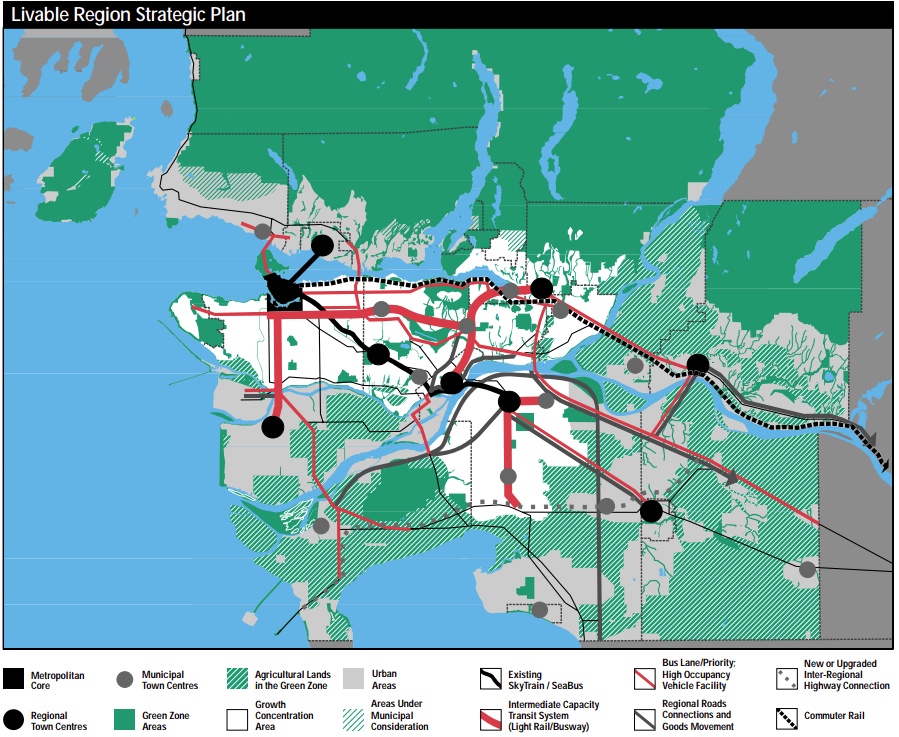 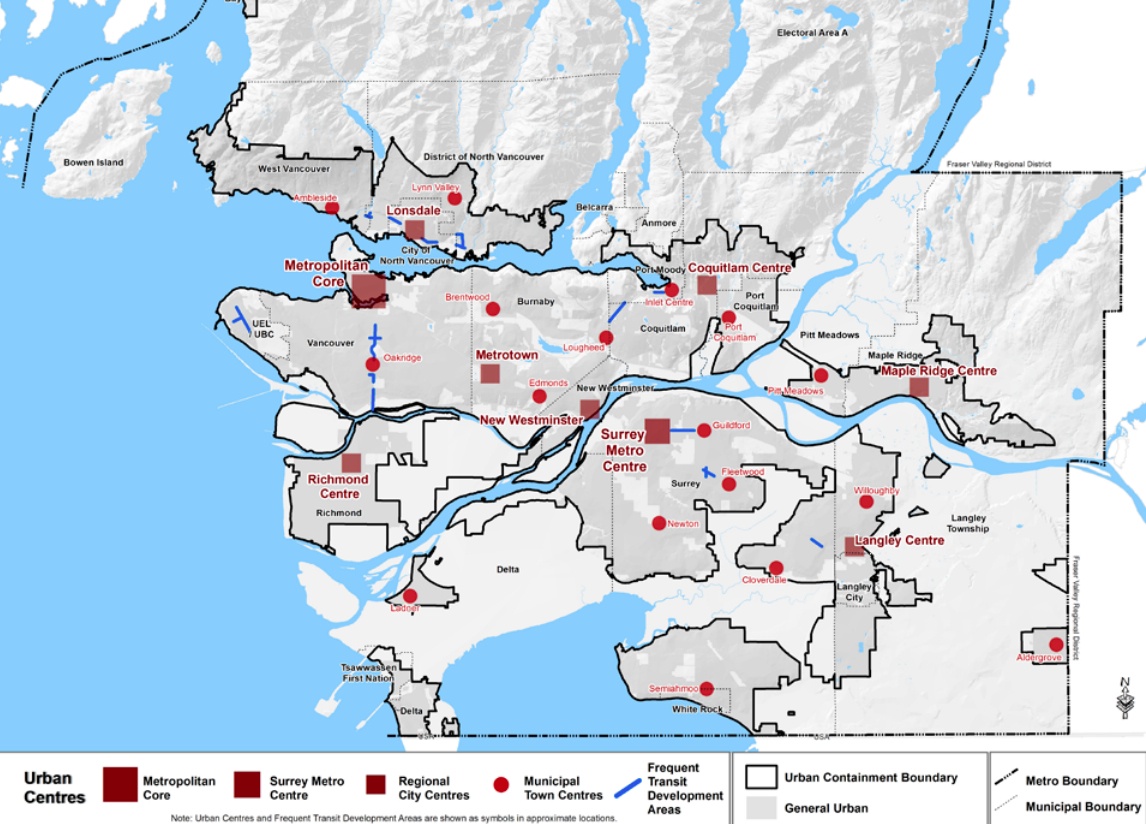 Ever since, Surrey has been actively working to alter previous regional and provincial plans to extend SkyTrain further South of the Fraser. Instead of any SkyTrain extension, there will now be two ground-level light rail transit lines totalling 27 km in length radiating outwards from Surrey Metro Core, in the same way that the Expo Line, Canada Line, West Coast Express, and SeaBus radiate out of downtown Vancouver.

Slow transit and requiring riders to take an extra transfer are measures that artificially and intentionally curb regional mobility. This economically robs all of Metro Vancouver of the synergies that are provided by connecting masses of people together – it means connecting people to all corners of the region, not merely their immediate area.

LRT proponents will often cite statistics on where south of Fraser residents work, but to tackle regional issues relating to housing affordability and supply, international and national economic competitiveness, congestion, and climate change, we need to examine and implement policies that are whole – not piecemeal policies that intentionally deepen divisions.

The problems are also compounded by Metro Vancouver’s generally lacklustre transportation infrastructure. While the current extent of the public transit system is relatively comprehensive compared to similarly-sized urban regions in Canada and the United States, it does not offset the inadequacies of the road system for the purpose of mobility and economic functions.

That is why Metro Vancouver needs a high-capacity, high-frequency, future-proof rapid transit backbone network that is truly regional.

And that backbone is called SkyTrain. In the absence of a more comprehensive, frequent West Coast Express network, such as the extent of service provided by the GO Train across the Toronto region, SkyTrain doubles as both a longer-haul suburban commuter rail transit service from the suburbs and a fast local service.

There is no reason to think SkyTrain cannot achieve both regional-serving and local-serving objectives.

Click here to read Part Two of ‘Surrey LRT and the Region.’