Further details on the designs of the underground Millennium Line extension on Broadway to Arbutus Street and the Surrey Newton Guildford LRT (SNG) will likely not be released until later this year when project-specific public consultations get going, but TransLink today provided more details relating to the construction costs, train frequencies, capacity, and forecasted ridership of the new rail systems.

Both projects combined will generate nearly 200,000 daily boardings to the regional transit system upon opening in the mid-2020s.

Its initial capacity using 80-metre length platforms – following the standard of the existing Expo Line and Millennium Line stations – will be set at 7,100 passengers per hour per direction (pphpd), which is a capacity increase of 255% over the existing 99 B-Line service. As it is a seamless part of the Millennium Line system, its ultimate future capacity with longer trains and higher frequencies is close to 25,000 pphpd.

While the project now carries a $2.83-billion construction cost, the projected ridership potential is providing the future-proof extension with extreme value in return.

TransLink anticipates 140,000 passengers per day will use the extension upon opening in 2025, which likely assumes that many of the 100,000 bus passengers that currently use the bus services on the Broadway corridor will be transplanted onto the SkyTrain extension.

Of this figure of the corridor’s existing bus ridership, over 55,000 bus passengers are on the 99 B-Line, which is already the region’s busiest bus route.

This is on top of new transit ridership the extension will generate.

And it will be nearly five times busier than the recently completed $1.4-billion, 11-km-long Evergreen Extension, which currently draws about 30,000 riders per day.

Looking at the system as a whole, the Broadway Extension’s opening day ridership would account for about 40% of the entire existing ridership of the Expo Line and Millennium Line network.

These are the extension’s six station locations (Note: These station names are for this article’s descriptive purposes only):

The travel time from the new section of track starting just west of VCC-Clark Station to the Millennium Line’s new western terminus at Arbutus Street will be about 11 minutes. This is roughly half of the travel time of the 99 B-Line on the same span starting from Commercial-Broadway Station.

West of Arbutus Street, the extension will be designed and built to allow for a future seamless subway extension to UBC’s Point Grey campus. While funding has not been allocated for the remaining journey to UBC, TransLink says Phase Two allows for further technical planning work to be conducted.

From end-to-end, the travel time will be approximately 22 minutes, with the span from Guildford and Surrey Centre taking about nine minutes and from Newton to King George Station taking about 13 minutes.

TransLink says passenger demand on the existing 96 B-Line traveling on the exact same route as the SNG LRT will exceed capacity within 10 years, and increased traffic congestion without bus-only lanes and traffic signal prioritization will slow down the B-Line on 104 Avenue and King George Boulevard. 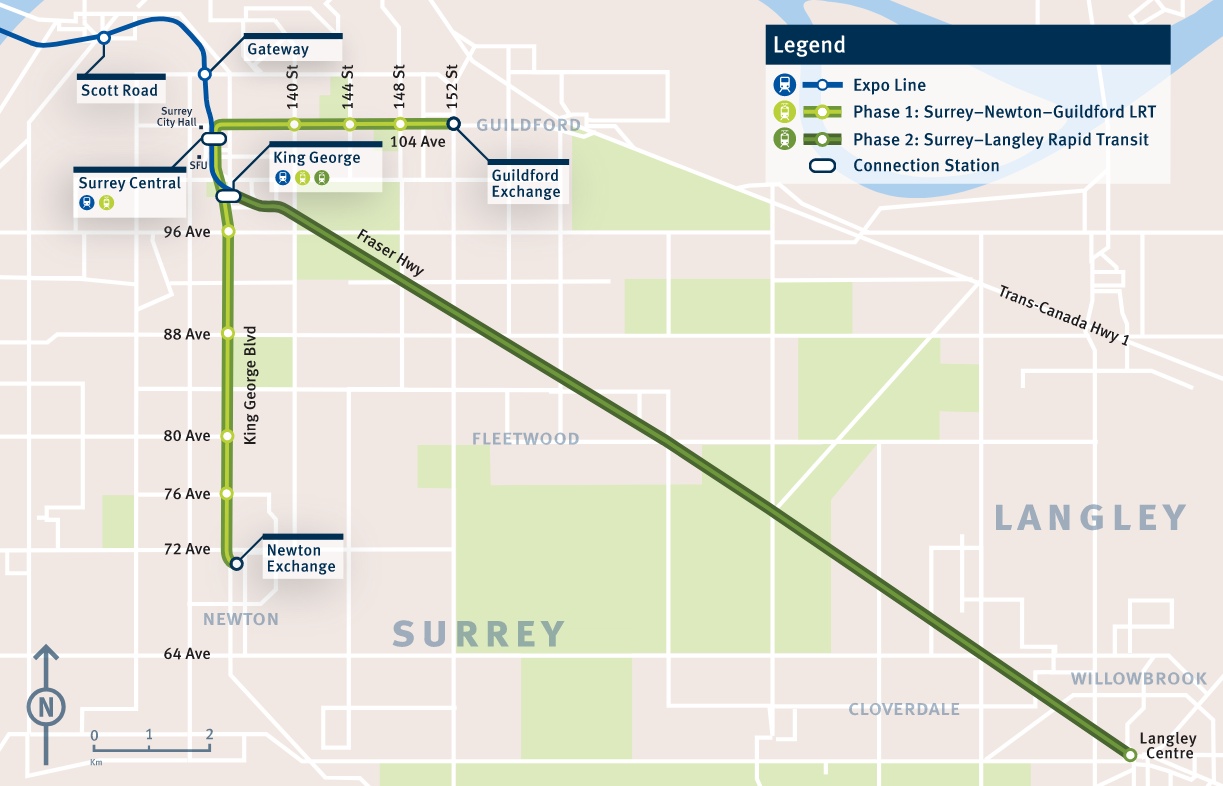 These are the extension’s 11 station locations (Note: These station names are for this article’s descriptive purposes only):

Preliminary technical planning will also continue for the second phase of the Surrey LRT project along Fraser Highway between King George Station and Langley Centre. This second phase accounts for 16 km of the total 26-km-long LRT network south of the Fraser.