The cost of waiting turns out to be expensive, very expensive.

That is the reality TransLink is facing for the 5.7-km-long underground Broadway Extension of the Millennium Line to Arbutus Street and the 10.5-km-long Surrey-Newton-Guildford LRT (SNG) project.

During a technical briefing for media this morning, the public transit authority provided the latest updated timelines and construction cost estimates for both projects.

The Broadway Extension is now pegged at $2.83 billion, which is up from the $2.28-billion highly preliminary estimate provided four years ago for the 2015 plebiscite.

And the new estimate for the SNG, the region’s first light rail transit project, is now $1.65 billion. That is closing in on the entire original $2.14-billion estimated cost of both phases of the 26-km-long south of Fraser LRT network, including the future, longer Fraser Highway extension between King George Station and Langley. 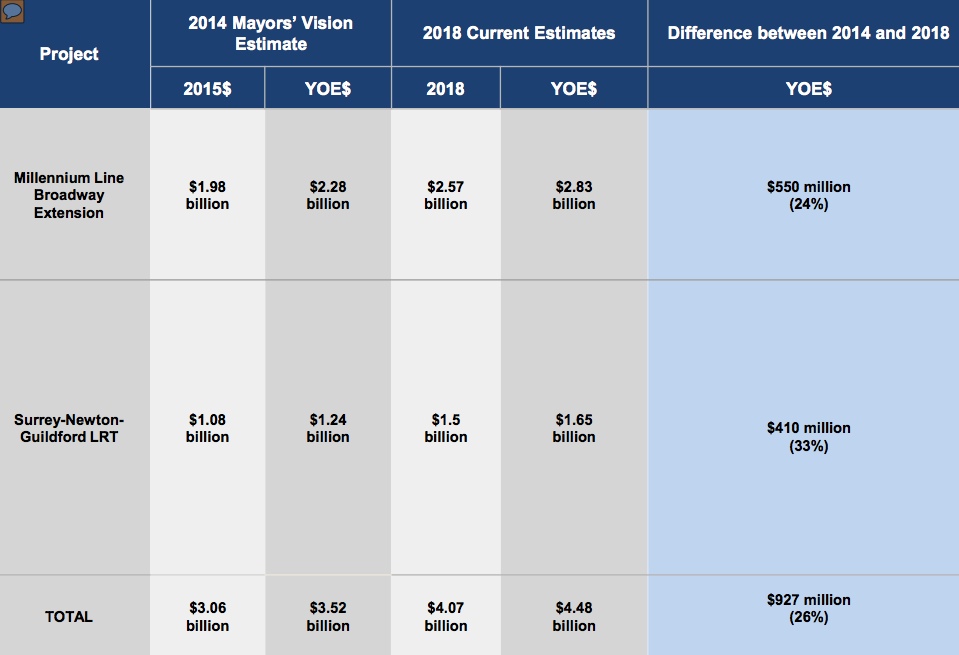 Both projects – initially slated for a 2020/21 completion – were forcibly delayed when regional voters went against a sales tax funding plan in the 2015 transit plebiscite.

The costs are up not only because of the different methods used to calculate the original estimate in 2015 but also because of inflation, which has increased market costs for labour and materials, and the cost of acquiring the real estate necessary to realize the projects has skyrocketed.

Additionally, the projects do not benefit from a weaker Canadian dollar.

“Everything has gone up. There’s absolutely no doubt… Property has gone up, and both of these projects are fully dependent on properties,” Sany Zein, Vice-President of Infrastructure Management and Engineering at TransLink, adding that there are major contingency funds built into the costs.

“This is why we really need to get on with these projects. The longer we wait, the more expensive they will be. Nothing is going down.”

The new estimates are also based on two years of engineering and geotechnical exploration, which involved extensive geotechnical soil test drilling along Broadway. Prior early estimates did not probe the technical aspects of the projects as significantly, as such explorations were also dependent on funding, which was only provided by the Phase One transit investment.

Higher costs with the Broadway Extension also relate to the selected construction method of a bored tunnel to reduce the level of disruption following Vancouver’s experience with the Canada Line’s cut-and-cover tunnel construction on Cambie Street.

“By the time 2024/25 arrives, we anticipate these two projects will cost what we’re putting forward today because those numbers will inflate over time as well,” said TransLink CEO Kevin Desmond.

And the real cost of both projects will not be determined until a private contractor is selected to design and build the extensions. In the case of the Evergreen extension, the private contractor was responsible for covering the cost overruns beyond the agreed budget in the contract.

As part of the Mayors’ Council’s Phase Two transit expansion plan, another $1.3 billion will be spent on 203 new SkyTrain cars, including 108 expansion cars and 95 replacement cars, plus station upgrades to Burrard Station and Brentwood Town Centre Station, design work for future upgrades to other Expo and Millennium stations, train yard and maintenance facility expansion, and power and other system upgrades.

And $530 million will go towards 151 new buses, including replacement buses for the existing fleet, and transit signal priority projects and enhanced passenger amenities. This includes two new B-Line routes (Newton to Scott Road in Surrey and Richmond Centre to Metrotown Station) beyond the four new routes that will be launched by next year.

Funds amounting to $36 million will be set aside for more planning work for the second future phase of the south of Fraser LRT system to Langley, the Burnaby Mountain Gondola reaching Simon Fraser University’s campus, and the remaining rail transit extension between Arbutus Street to UBC’s Point Grey campus.

Other relatively nominal funds of $75 million will be allocated to road infrastructure to support TransLink’s Major Road Network and $50 million will go to pedestrian and cycling improvements.

This does not include $855 million for the 10-year operational cost of increased, new, and expanded services. The operating cost budget will also cover increased frequencies on all three existing SkyTrain lines and a bus service level increase of 8% in 2020/21.

Much of the $440 million TransLink raised from the 2016 sale of its Oakridge bus depot will also go towards the rail transit projects.

Desmond noted that TransLink’s share of the costs is now less than what was proposed during the plebiscite, as previous provincial and federal governments did not prioritize transit investment.

“Costs have gone up but actually for regional taxpayers, we are seeing less because of the profound and positive support of the provincial and federal governments,” said Desmond.