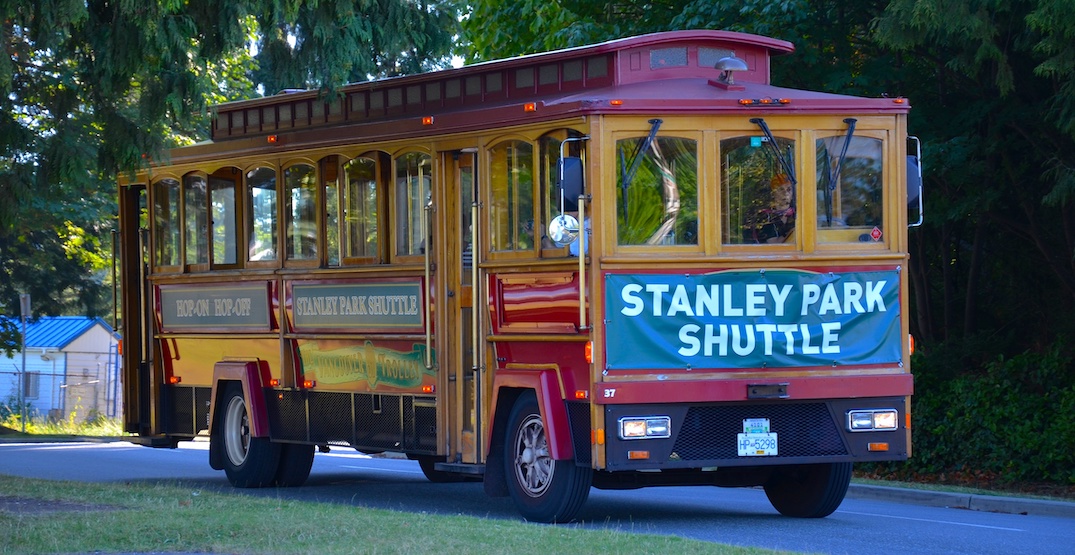 An elected official with the Vancouver Park Board has made a public request for TransLink to improve bus services to and within Stanley Park.

He suggested such a service could use a hybrid or electric-battery bus to “highlight sustainability.”

Such a service, he says, will align with the Park Board’s upcoming exploration of options to reduce vehicle traffic within the 1,000-acre park.

Irwin said this is a “reinstatement” of the circling bus service that once operated in the park between the late 1990s and 2008. However, this free shuttle service was funded by the Park Board.

With an annual subsidy of $200,000, the Park Board contracted the Vancouver Trolley Company to operate a hop-on, hop-off type of service using four red vintage-inspired buses, with the service running only over the summer months between 10 am and 6:30 pm daily, stopping at a dozen points of interest.

In 2008, the “Round The Park” free shuttle recorded approximately 140,000 boardings, mostly tourists. It was an effective measure that helped reduce vehicle traffic volumes circling the park during the busy peak season.

But in 2009, the Park Board decided not to renew its contract with the operator due to its budgetary issues at the time, even though the subsidy was raised from Stanley Park’s pay parking revenues.

There was an attempt years earlier to charge a nominal fare of $2.00 for adults and $1.00 for children to help cover the subsidy, but this resulted in a ridership drop of 60% for the lone year this was tried.

For comparison’s sake, TransLink does operate a summer community shuttle to a far-flung beach park in West Point Grey.

The No. 42 mini-bus service on the 3.5-km-long route between Spanish Banks and the intersection of Alma Street and West Broadway had an operating cost of $33,000 in 2018. With a total of roughly 4,000 boardings for the season, its average cost per boarding is $7.90, making it a highly subsidized route — the 16th most expensive bus route to operate in the region on a cost per boarding basis, in fact.

Elsewhere in the region, such services are typically Independent Transit Services (ITS), which are spearheaded, fully self-funded, and operated by municipal governments, private operators, or other entities.

All applications for ITS are regulated and approved by TransLink, which makes its decisions based on whether the proposed service might have a negative impact on the public transit authority’s regular services.

Over the past few years, the municipal governments of Port Moody and White Rock contracted operators to run free bus shuttle routes under the ITS framework.

Port Moody’s service operating on summer weekends connected SkyTrain’s Inlet Centre Station, Rocky Point Park, and SkyTrain’s Moody Centre Station on a looping eight-km-long route. According to the city’s 2018 application for the service’s inaugural year, the primary goal of the service is to help address traffic congestion and parking issues during the busy peak season. Using a single 34-passenger vehicle, it had a seasonal operating cost of $50,000.

“By providing a free connection between the Millennium Line and nearby parking facilities, the City hopes to reduce the number of cars within the corridor, mitigating the negative impacts of the areas increasing popularity on local businesses and improving pedestrian and cycling conditions.”

The $100,000 cost of operating the shuttle for the season was entirely covered by the city, while the $70,000 cost for the trolley was split between the city and local business improvement association.

Irwin also requested TransLink to increase its service on the existing No. 19 Stanley Park/Metrotown trolley bus, which has three bus stops within Stanley Park. It is the only transit bus route that stops within the park.

Other suggestions by Irwin include a new or extended Stanley Park bus route from a nearby SkyTrain station, as well as new pull-over bus stops along the Stanley Park Causeway for some North Shore bus routes. This would potentially provide existing bus services with a new reach deep within the park.