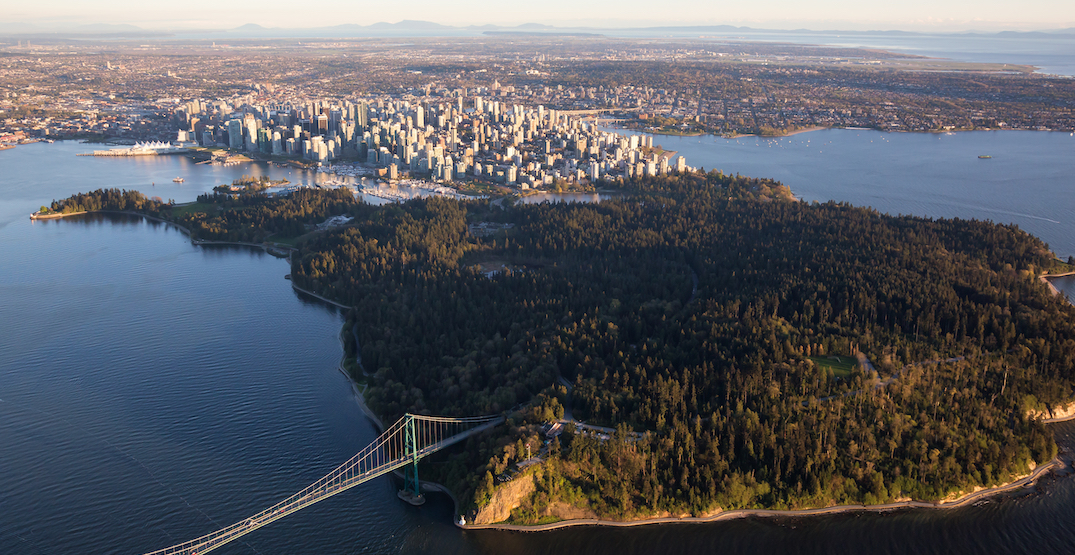 While the closure of Stanley Park’s local roads to vehicles during COVID-19 and the forthcoming long recovery period is certainly a highly pragmatic solution, the same cannot be said for the growing suggestions that this should become permanent, after the crisis has abated.

The closures currently affect Stanley Park Drive, which loops around the park along the perimeter over a distance of about 10 kms. Currently, the intended temporary closure accommodates a one-way cycling route to improve physical distancing for cyclists, and pedestrians on the seawall.

The Stanley Park Causeway leading to and from the Lions Gate Bridge remains open to vehicles, of course.

There have been some calls for the Vancouver Park Board to mirror New York City’s 2018-enacted closure of Central Park’s local roads to vehicles, except for several crosstown arterial thoroughfares that cut through the park.

But there are some obvious deficiencies with this comparison, considering the high level of accessibility of Central Park, which is framed on all sides by the urban jungle of Manhattan.

Central Park’s size of 840 acres makes it comparable to Stanley Park’s 1,000 acres, but the NYC park is just 800-metres wide — equivalent to only three short city blocks — along its entire four-km-long strip across the core of the island.

Along Central Park’s 10-km-long perimeter, there are dozens of entry points for pedestrians and cyclists to access the green space, and many of its attractions and businesses. There are also a number of bus routes and subway stations along the perimeter that make reaching this park highly accessible.

As well, attractions that are deeper within Central Park are still a fairly short walking distance away from the perimeter, given the narrow width of this green space.

Then we have Stanley Park, a large, irregularly-shaped land mass at the very tip of the downtown Vancouver peninsula, only accessible from its narrow southern perimeter with the West End. It is otherwise surrounded by the waters of Burrard Inlet, practically like an island with Lost Lagoon also acting as a barrier.

There is some bus service, specifically the North Shore buses that run along West Georgia Street, and the downtown buses on Robson Street and Davie Street, which stop outside the park in Coal Harbour and the West End. The No. 19 Stanley Park/Metrotown trolley is the only bus route that ends inside the park, terminating at Stanley Park Loop in the southeast sector.

For these reasons, restricting vehicle access would effectively limit the use of Stanley Park, especially its far-reaching, northernmost areas, to individuals who are able-bodied.

Moreover, not everyone wants to walk or cycle through the entire enormity of the park during their excursion. A vehicle closure would effectively reduce the regional destination into merely a park for West End residents. 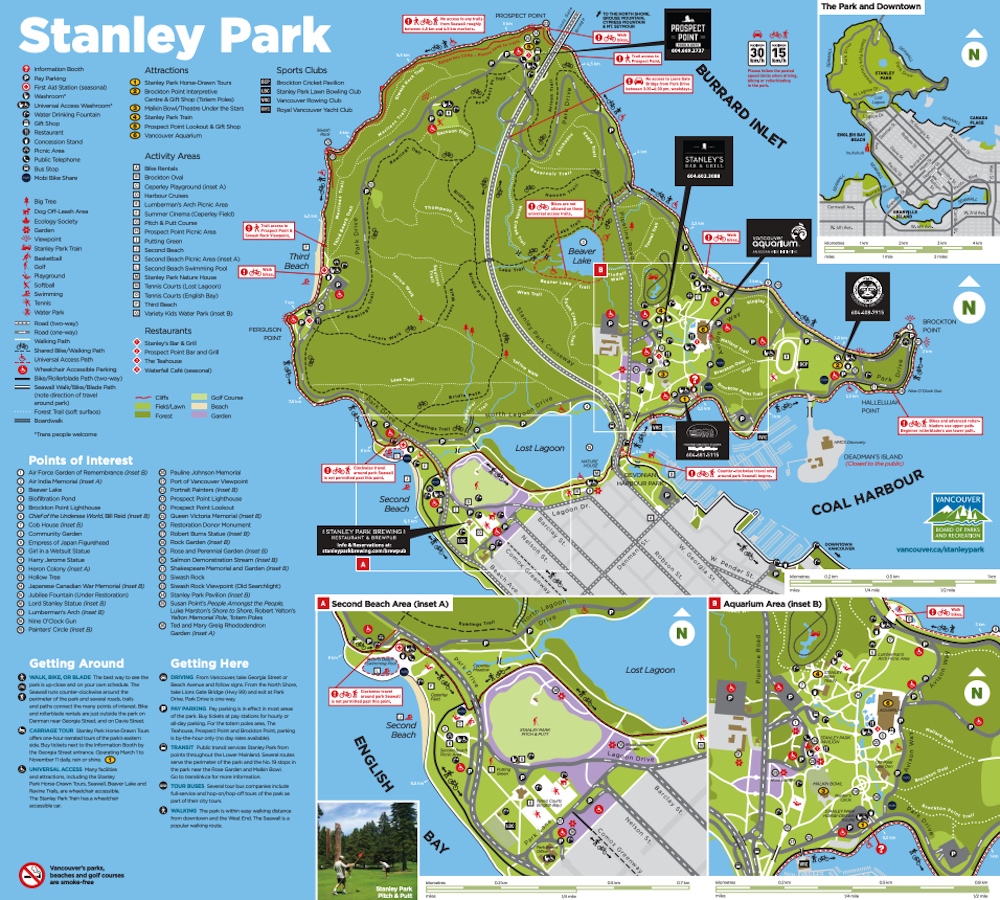 Map of Stanley Park in Vancouver. (Vancouver Park Board)

But we are not San Diego no matter how much people like to pretend we are.

If we were to close the park to vehicles, what kind of pedestrian and cyclist visitation can be expected over the wet and cold period that lasts over more than half the year?

A number of private businesses located within Stanley Park also rely on both regional and tourist traffic — arriving in personal vehicles and tour buses — to sustain their operations.

The Park Board has a mutually beneficial relationship with these high-profile restaurants and the Vancouver Aquarium.

In 2019, Prospect Point Cafe at the northernmost end of the park paid rent of 6% of their gross food and beverage revenue, and 10% of gift shop revenue. It generates nearly $200,000 annually towards the Park Board’s revenues.

It reopened in 2017 after an extensive $3.5-million private investment that rebuilt the attraction, creating the Prospect Point Bar & Grill — a large restaurant with a dining capacity of about 100 people indoors, and 130 people outdoors. Attached to this building is the Prospect Point Cafe and the Trading Post gift shop.

A 2010 Park Board staff report stated the Prospect Point attraction, prior to its reconstruction, saw a four-year decline in revenue, citing factors that included a new road configuration that resulted in Stanley Park Drive no longer passing in front of the restaurant, and limited parking and less tour bus parking than the road’s pre-construction. 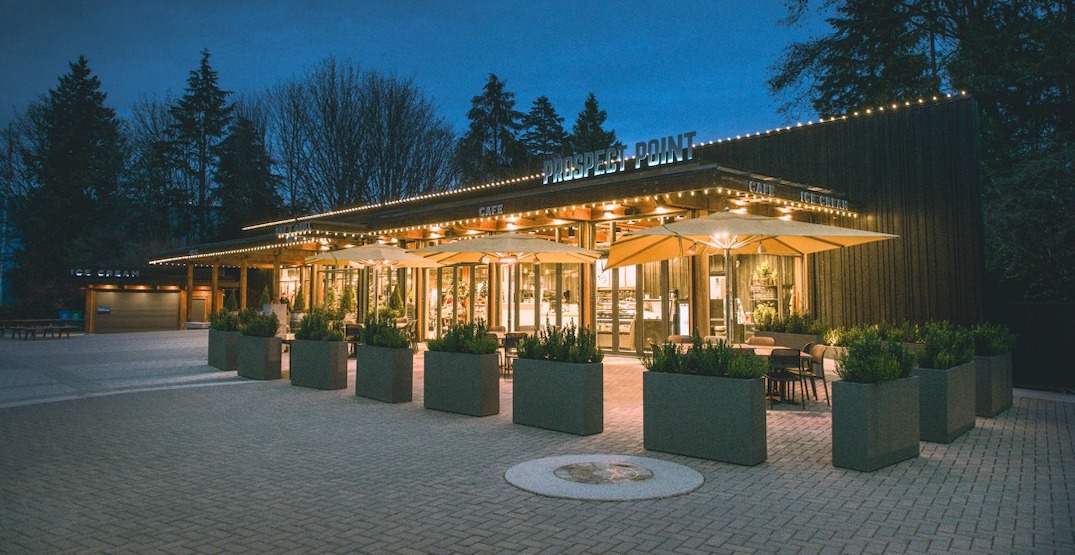 Over at the southern end of the park, the Stanley Park Pavilion’s private operator pays rent based on 6.25% of their revenues. In 2013, this amounted to over $140,000 to the Park Board.

At the western perimeter of the park near Third Beach, The Teahouse’s annual rent structure is set at 4% for the first $2 million in revenue and 6% for over $2 million. The Park Board sees upwards of over $300,000 each year from The Teahouse.

Last year, Stanley Park Brewing Restaurant and Brewpub opened after a $4.5-million renovation of the old Fish House, located close to the park’s southern perimeter. Its rent is based on 2% of their revenues for the first $2 million, and 5% for over $2 million. The Park Board projected its return in the first year to be $320,000. 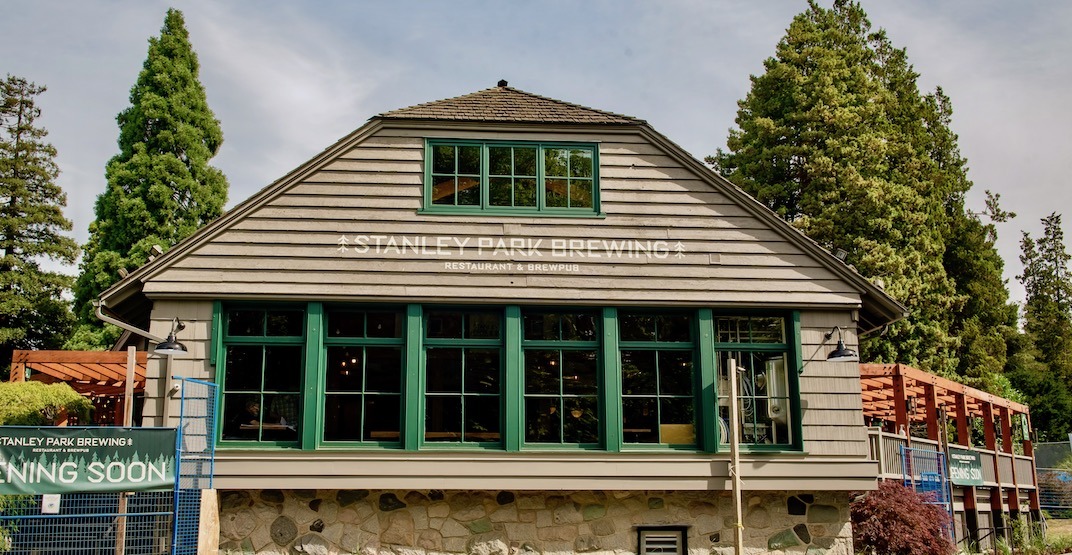 Altogether, the Park Board’s revenue from Stanley Park’s privately-operated restaurants totals about $1 million annually. For some visitors to Stanley Park, the main purpose for their trip is to visit these restaurants.

Some of these businesses also see revenues from private events, such as weddings.

And this does not even include the Vancouver Aquarium, which has an agreement to pay about $300,000 annually in rent, plus a similar percentage of its food and beverage services from its relatively new cafe. In 2019, the Park Board struck an agreement with the aquarium to waive these fees over the first five-year period of a new 35-year lease, ending years of conflict between the two entities.

It takes the entire region to support a major attraction like the aquarium, and this is partially accomplished by ensuring road access is maintained for suburban families with young children arriving by private vehicle, students in school buses, and tourists in tour buses. 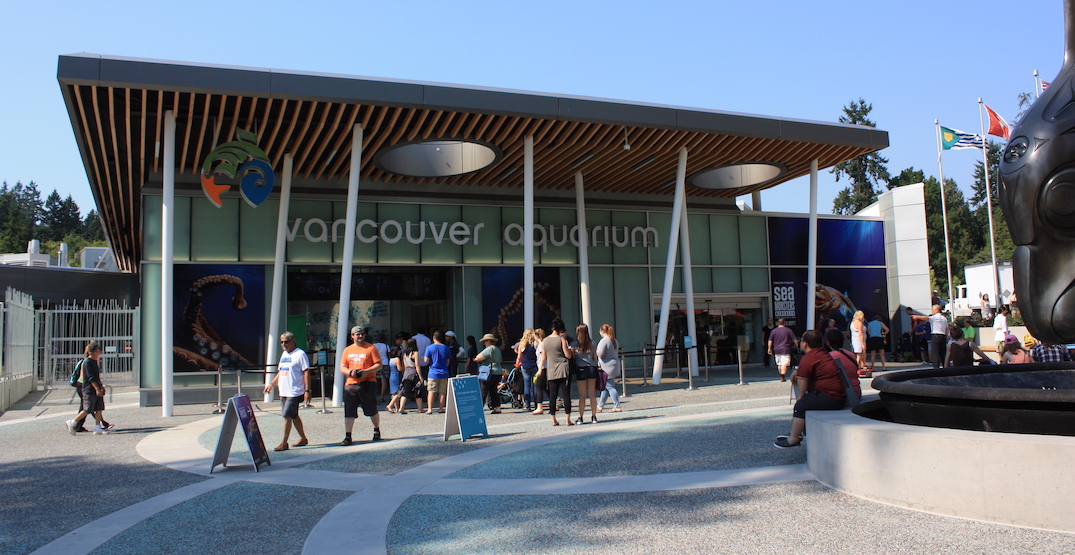 There are close to 2,600 vehicle parking stalls across the park, with the largest lots being the 275 stalls at Stanley Park Central West, 200 stalls at Brockton Oval, 198 stalls at Avison Way and the aquarium, 178 stalls at Third Beach, 162 stalls at Second Beach, 153 stalls at the Information Booth, and 118 stalls at Prospect Point.

Most of these are marked stalls across 25 parking lots, with just 300 stalls as unmarked curbside parking. 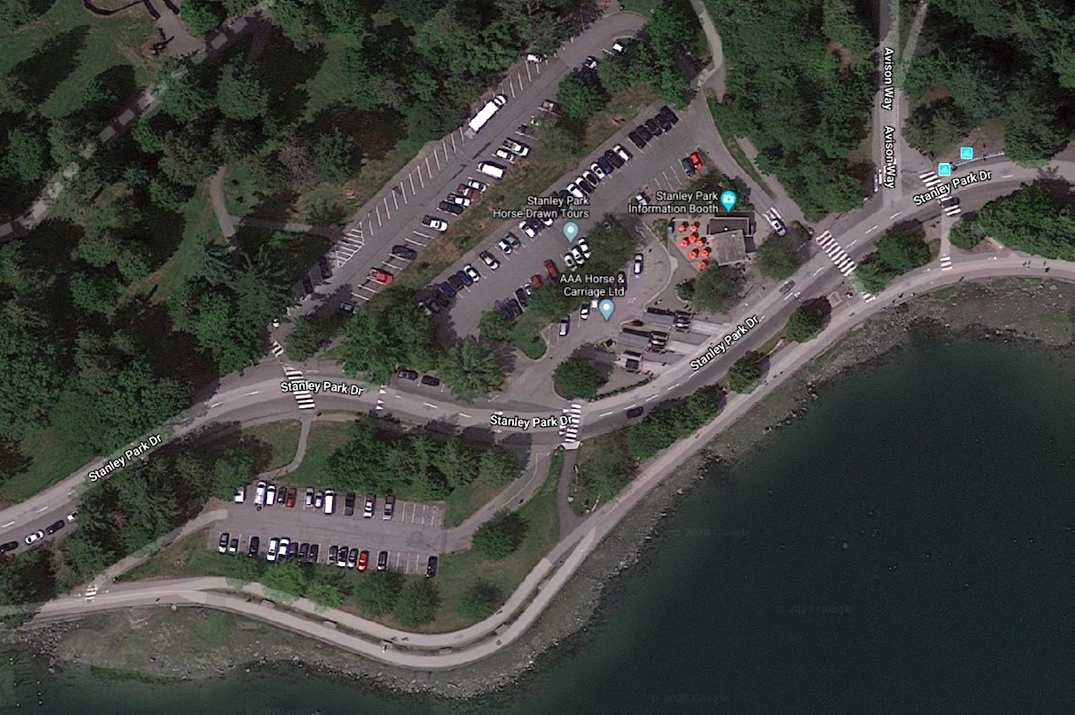 The Information Booth parking lot at Stanley Park is one of the secondary parking lots that support the Vancouver Aquarium. (Google Maps)

This is a lot of parking, but it also speaks to the accessibility challenges of the park’s geography, and the diverse needs and interests of its visitors.

To a limited extent, some of these accessibility and vehicle traffic issues could be addressed by a free shuttle service circling Stanley Park Drive.

Up until 2008, there was a free, summer-long shuttle bus operated by the Vancouver Trolley Company and subsidized by the Park Board at a cost of $200,000 annually. It used four red vintage-inspired buses, with the service running between 10 am and 6:30 pm, and stopping at a dozen points of interest.

In its final season of operation, it saw approximately 140,000 boardings, mostly tourists. It helped reduce vehicle traffic volumes circling the park during the busy peak season.

But the Park Board decided not to renew its contract with the operator given its budgetary issues at the time, even though the subsidy came from Stanley Park’s pay parking revenues.

Years earlier, the Park Board piloted a nominal fare for the shuttle to help cover the subsidy, but this resulted in a ridership decrease of 60%.

The decision to axe the free shuttle was made around the same time when the Park Board closed the Stanley Park Petting Zoo, and nearly shuttered the Bloedel Conservatory at Queen Elizabeth Park. 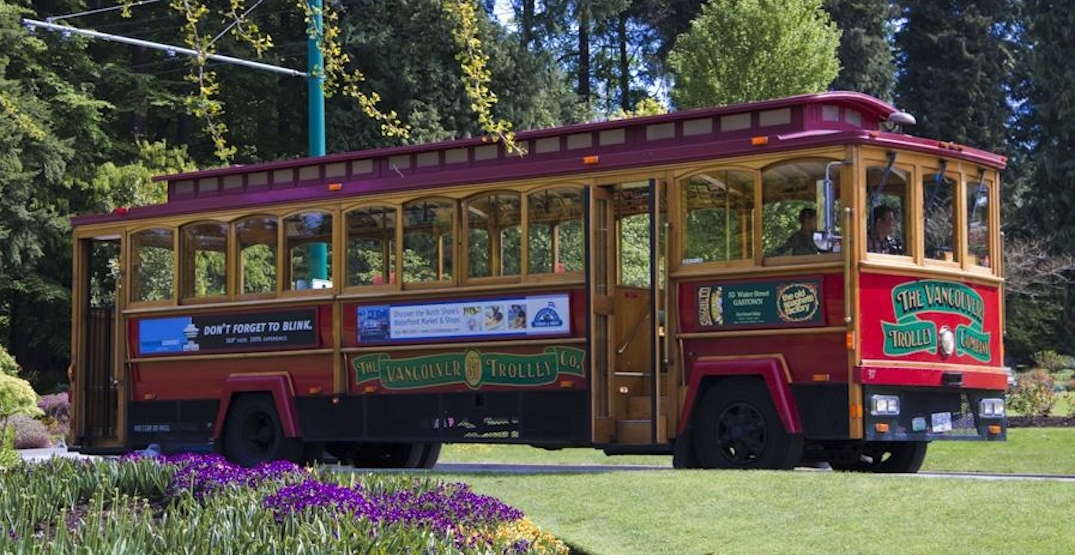 Without vehicle access into the park, not only does this narrow the type of visitors the park sees, but it would cost the Park Board millions of dollars annually from reduced parking revenue.

Considering the Park Board’s likely years-long fiscal crisis from lost fee-based revenue as a result of the initial closure of its community and recreational facilities and the expected lowered visitation numbers upon reopening, the idea of closing Stanley Park to vehicles — affecting its revenues from both businesses and parking — beyond the pandemic period is not in the municipal government’s best interest.

Further revenue losses will only affect the Park Board’s capacity to deliver its services and conduct maintenance.

The park’s restaurants and the Vancouver Aquarium have already immensely financially suffered from their prolonged closures, and they will continue to experience a high degree of uncertainty for the foreseeable future. Closing vehicle traffic will only lead to further damages.

Clearly, a wider range of factors and tradeoffs must be considered with the idea of permanently closing Stanley Park to vehicles.

A high degree of pragmatism is required to carefully analyze all potential impacts, and this process might be better saved for the Park Board’s Stanley Park Comprehensive Plan, instead of rushing in an implementation in response to narrow, single-minded, and overly simplistic considerations.

The plan could identify new ways that improve the comfortability of both walking and cycling through Stanley Park, without having to close local vehicle traffic.