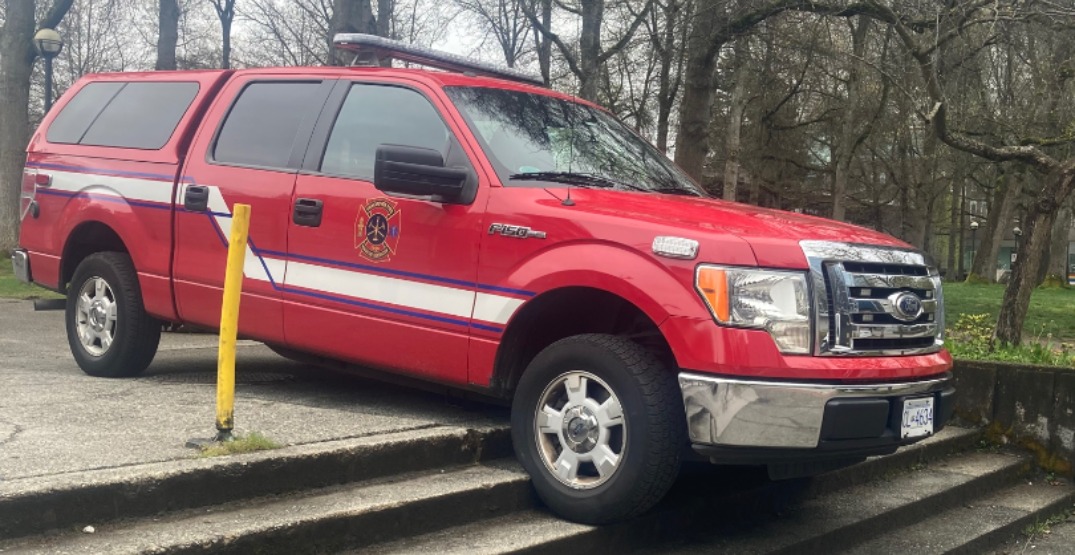 A photo shared on social media shows what appears to be a Vancouver Fire Rescue Services truck parked halfway down the stairs at the University of British Columbia this week.

It happened near East Mall, across from IK Barber Learning Centre, according to the person who posted the picture on Twitter.

Vancouver Fire and Rescue Services told Daily Hive on May 5 that the vehicle was being driven by its inspections team at UBC before coming upon a road closure on campus.

In response, they decided to take the service road also used for emergency vehicles.

“The officer had previously been a driver at UBC, 10 hall, and thought he had remembered the correct path he had used before. They saw the collapsible bollards and assumed it was the continuation of the service road, which is actually off to the side,” Vancouver Fire and Rescue Services said in an email to Daily Hive.

“From their view, they didn’t realize that they had taken the wrong approach until it was too late.”

The driver was able to back out off the stairs shortly after.

East Mall, across from IK Barber Learning Centre; a classic for some years now pic.twitter.com/zFWL8rIoKa

While it was stuck, the vehicle’s front wheels were all the way down on the third step while the back wheels stayed precariously perched on the walkway above.

This isn’t the first time a UBC staircase has become a creative, if very slanted, parking spot. A car was seen on the stairs in August too, and several vehicles including a taxi were as well in 2017, begging the question: why is this particular structure so difficult for drivers?

In the Twitter thread with the picture of the Fire Rescue Services vehicle, someone replied, “This kind of goofy UBC stuff is a hazard for first responders.”

“Another bad design mess that could lead to trouble for UBC students, either driving in any direction at the corner or at the bus stop,” they continued.

Another commenter had a lighter take, adding, “After a pandemic hiatus, it is only fitting we offer a special sacrifice to the stair gods.”