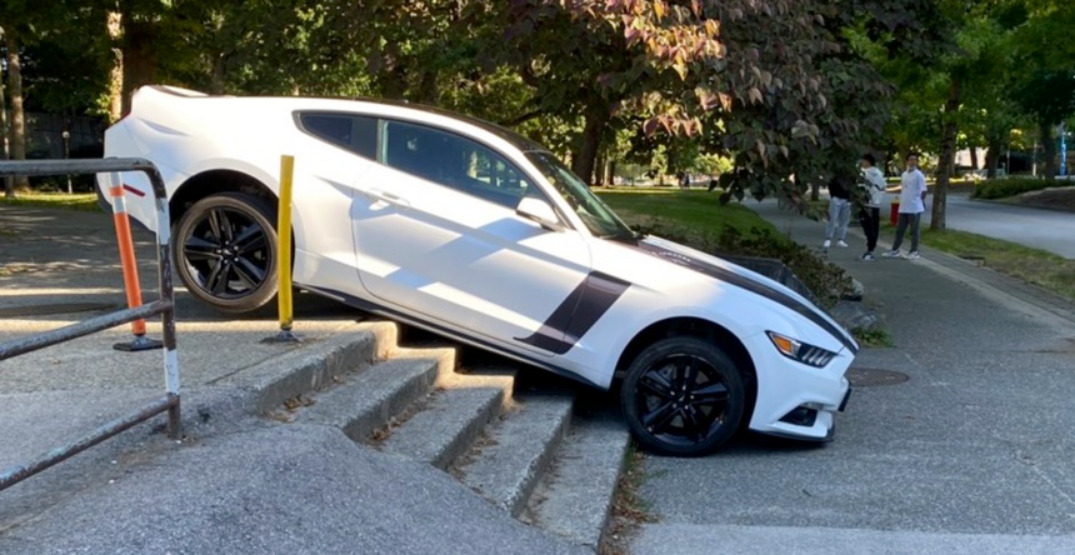 A car was photographed stuck on the stairs at the University of British Columbia (UBC) this weekend, next to Brock Hall on East Mall.

The event occurred on Sunday afternoon, at around 4:30 pm.

Someone shared a photo of the souped-up white Ford Mustang on Twitter.

While there didn’t appear to be any external damage to the vehicle, the car remained on the stairs for at least an hour, according to the Twitter user who documented the ordeal, writing, “I wonder what happens now.”

We are spending the day at UBC today but found this odd situation. I wonder what happens now. @NEWS1130 @CKNW @CTVVancouver pic.twitter.com/1fmqbGFwJG

Two young men can be seen surveying the potential damage in one of the pictures.

A UBC spokesperson told Daily Hive that they’re looking into the situation.

“We’re aware of the incident and are reviewing it as we look to improve safety on our campus,” they said.

“UBC Vancouver is busy this week as students return for September 7 start of classes. We would ask all drivers to pay close attention to signs indicating roads and pedestrian pathways.”

This isn’t the first time this has happened on these particular stairs. A taxi famously got stuck a few years ago, along with a Volkswagen and a Mercedes SUV.

Daily Hive has reached out to the university’s RCMP detachment for comment.