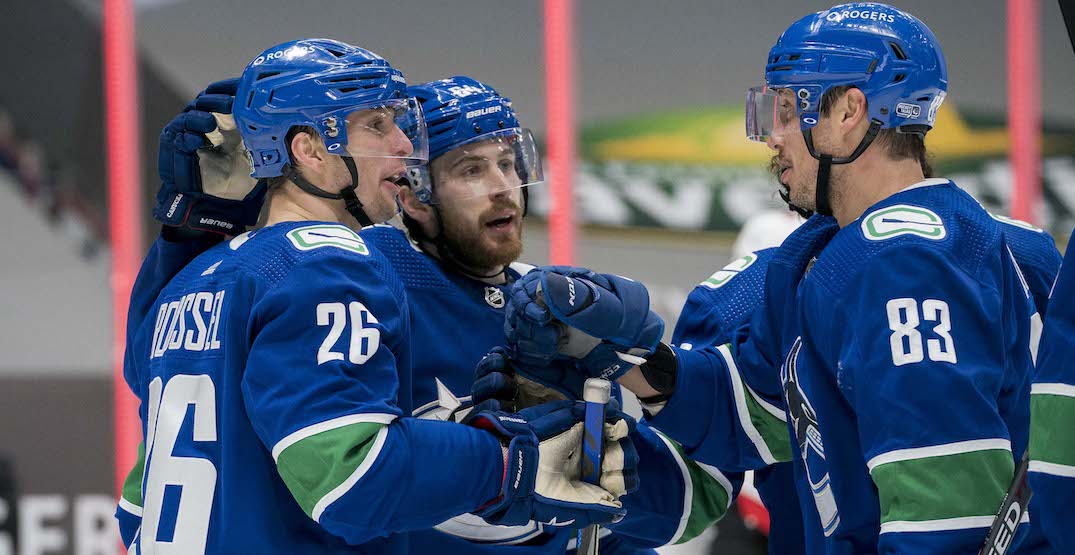 With over a month to go before the entry draft, the Seattle Kraken expansion draft, and free agency, it’s strategy time for the Vancouver Canucks.

The Canucks made decisions on their coaching staff last week, have to find new contracts for Elias Pettersson and Quinn Hughes, and will need to make decisions on a few pending unrestricted free agents.

GM Jim Benning has promised to be “aggressive” on the trade front and in free agency, and appears likely to use the buyout option to clear some cap space.

But unless he pays a price that hinders the team’s future or pulls a rabbit out of a hat, it seems highly unlikely that Benning will be able to clear enough cap space to make a tangible difference. Getting back into the playoffs next year appears to be a high priority for the organization, but making bold moves that hurt them beyond 2022 would be misguided.

The Canucks are in a brutal spot right now. Their defence is in shambles and their bottom six is a wasteland of well-past-their-prime journeymen.

Demko’s cap hit goes from $1.05M last season, to $5M next season. Elias Pettersson and Quinn Hughes are moving from entry-level deals to contracts that will likely make them the highest-paid players on the team.

Vasily Podkolzin will make his NHL debut next season, and he should help. Defenceman Jack Rathbone showed some promise in eight games last season, and maybe he becomes a regular in the lineup.

Beyond that, the prospect pool has run a bit dry. Olli Juolevi and Kole Lind haven’t done well enough to believe that they’ll be difference-makers soon, if they ever do at all. The Canucks traded their first- and second-round draft picks in 2020, so that will be a missed year unless a late-round gem materializes.

Great, so what do they do?

The hard reality is that the Canucks have too much bad money on their books.

They have been linked to Sam Reinhart, who made $5.2M and needs a new contract. The West Vancouver product would fit nicely on a line with Bo Horvat, but where is the money coming from to sign him, never mind the assets required to acquire him?

Bringing back Travis Hamonic could make sense, but they don’t have the cap space to give him too big of a raise, nor are they in a position to risk offering the soon-to-be 31-year-old anything beyond two years in contract length — and even that might be too long. They’re in no position to be in a bidding war.

One potential free-agency note: word is that Travis Hamonic, who has opted to stay in Western Canada the last few seasons, is willing to consider all options if he hits the market. VAN still has time to re-sign.

Benning would surely love for the Seattle Kraken to take Holtby off his hands in the expansion draft — but that’s probably going to cost Vancouver a draft pick for Seattle GM Ron Francis to agree to that.

Expansion draft protection issues should make good players available for the Canucks to pounce on in trades, so that’s a plus.

Some have suggested that the Canucks could trade their first-round pick, and certainly the No. 9 selection could fetch something promising.

But how bizarre would it be for a still-rebuilding team, which has made the playoffs just once in six seasons, to have their first-rounder traded in back-to-back years? Dealing draft picks is a move that good teams do to become great, not an advisable choice for bad teams to become mediocre.

Maybe that means the Canucks won’t make the playoffs again next season, and that’s a tough pill to swallow. But that’s the mess they’re in.

In an interview on CHEK earlier this week, Elias Pettersson’s agent, J.P. Barry, indicated that he believes the team will be unable to offer long-term deals to both Pettersson and Quinn Hughes.

Even if you think a bridge contract is the way to go anyway for one or both Pettersson and Hughes, the fact they may not have the option to go longer with their franchise players is an indictment on management.

I’d love to give you a fun blueprint for the team going forward that involves multiple trades, and big fish in free agency. But unfortunately, we have to recognize the reality of the situation.

The Canucks are in a mini-rebuild. They’ve accumulated the core pieces, but they’ve whiffed in nearly every other area.

So sure, try to trade Eriksson, Beagle, and Roussel — good luck. Maybe Tyler Myers or Nate Schmidt can be moved — but they’re thin on defence as it is.

The good news is, as long as Benning doesn’t pile onto his problems by adding more bad money this offseason, he’ll be in a much better spot in 2022. That’ll be the time to start talking about signing guys like Morgan Reilly or Seth Jones in free agency.

But until then, the solution isn’t a sexy one.

The Canucks need to be patient, and their fans need to brace for more pain.