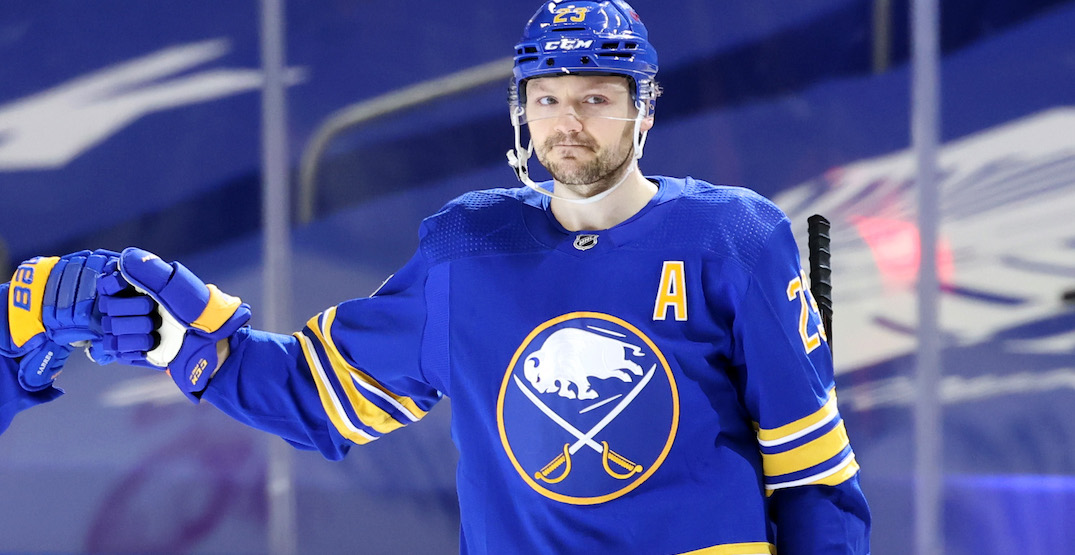 Sam Reinhart was a bright light on the Buffalo Sabres, who are somehow still in a very dark place.

The laughing stock of the NHL, the Sabres will finish dead last in the overall standings this year. The last time they made the playoffs was in 2011, when Tomas Vanek led the team in scoring and Tyler Myers was fresh off winning Rookie of the Year.

So yeah, it’s been a while.

They’re seemingly in a never-ending rebuild, one that Jack Eichel doesn’t appear to want to endure anymore.

Another Sabres star who might also want out is Reinhart, the team’s leading scorer, according to Paul Hamilton of WGR 550 in Buffalo. Speaking with Mike Halford and Jason Brough on Sportsnet 650 this morning, Hamilton said the West Vancouver native wants to play closer to home.

“Reinhart is tired of it,” Hamilton said of Sabres’ 2014 first-round pick. “Reinhart said in his end-of-the-year [media availability] that he’s going on 26. He’s not up for a rebuild. That’s not what he’s looking for. I’ve heard that he wants to be traded to the west coast. That’s where he’s from.”

Could North Van native Sam Reinhart be in line for a trade back home? Earlier on Halford and Brough, Paul Hamilton of WGR 550 in Buffalo mentioned that he's heard Sam wants to play on the west coast. 🔊 pic.twitter.com/w5CeVNPe7s

When Reinhart was asked if he wanted to stay in Buffalo this week, his response wasn’t exactly inspiring.

“I don’t really have much to say right now,” he said. “Going to take some time, that stuff’s going to get figured out when the time comes.”

Sportsnet’s Elliotte Friedman is reporting that “more than one” team in western Canada would love to have Reinhart.

Reinhart is a player that Jim Benning reportedly coveted in his draft year. The rumour at the 2014 draft was that the Canucks offered Florida their two first-round picks (later used to choose Jake Virtanen and Jared McCann) and Hunter Shinkaruk for the first-overall pick, which Vancouver would use on Reinhart.

The deal never materialized, but it showed what Benning thought of the local product. Florida ended up taking Aaron Ekblad with the first pick, and the Sabres chose Reinhart second overall.

Reinhart may want to play in Vancouver and Benning may like him as a player, but acquiring him would be difficult for a couple of reasons. To start with, the Canucks are still in salary cap hell, and would have trouble making space for his contract. Reinhart is a pending restricted free agent, and made $5.2 million last season.

Taking money out of the equation, Reinhart looks like he could be a great fit playing right wing next to Bo Horvat or Elias Pettersson. He’s only 25, so he fits the right age range too.

That also means that the Sabres would have no shortage of bidders for his services. After giving up future assets recently for J.T. Miller and Tyler Toffoli, the Canucks probably aren’t in a good spot to mortgage more of the future, and certainly not players like Nils Hoglander or Vasily Podkolzin.

Would they consider trading Miller? Unlikely. Brock Boeser? I don’t think so.

Barring the type of salary cap gymnastics we’ve never seen out of Benning before, Reinhart probably isn’t a player they can afford — at least not until a few more bad contracts come off the books in 2022.