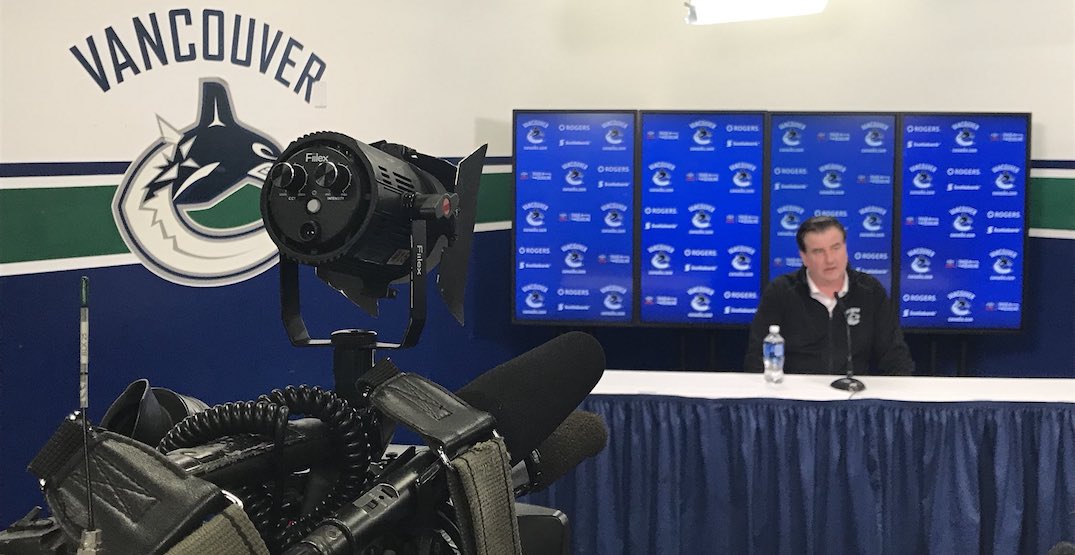 The Vancouver Canucks find themselves in an awkward situation.

With their two best players about to sign hefty second contracts, a captain who just turned 26, and a young goaltender locked up long-term, they’re firmly in win-now mode. The only problem is that they’re being hindered by the win-now moves of the past.

The Canucks currently have just a hair under $15 million in projected cap space for next season to fill seven roster spots, including new contracts for Quinn Hughes and Elias Pettersson. While clearing more space via buyouts or creative use of LTIR is still possible, as things currently stand, the Canucks have a ton of holes and not enough money to plug them.

That’s why Jim Benning’s comments at the team’s year-end press conference should give Canucks fans pause.

“We want to be aggressive this summer and we want to get back to being a playoff team again next year,” said Benning, clarifying later that trades, free agency, and buyouts were all part of his plan.

It doesn’t take a degree in economics to determine that the Canucks’ financial situation changed due to the COVID-19 pandemic, and it’s fair to say that cash flow problems probably at least partly contributed to the team’s woes this season. But it’s important to remember that prior to 2020, a willingness to spend money was never the team’s problem. The team has always spent to the cap. The issue is just that they didn’t spend wisely.

I’ll spare readers the full list of ill-advised signings from the past seven years, but needless to say, they spent their money on the wrong players at the wrong time. Unless there’s going to be significant changes in the decision-making process, turning the taps on again won’t make much difference.

This year’s free agent crop isn’t particularly inspiring, and the Canucks simply don’t have the money to take a swing at one of the big-ticket names. There are a few younger free agents who should come cheap and may be worth a look like Alex Wennberg, Alex Galchenyuk, or Slater Koekkoek, but the Canucks’ aren’t in a position to be aggressive when it comes to offering money or term.

On the trade front, the team has fared better in recent years, but even their biggest successes have come with an asterisk.

The J.T. Miller trade was only a couple of bounces away from backfiring spectacularly, and the $5.95M AAV attached to Nate Schmidt has only exacerbated their cap problems, even if they gave up next to nothing to get him. Even Tanner Pearson, who was easily the organization’s biggest home run of recent vintage from a value perspective, was re-signed to yet another onerous deal.

Then there’s the obvious misses, like giving up Jared McCann in exchange for Erik Gudbranson, or trading away a useful young defender in Gustav Forsling for 17 games of Adam Clendening.

Speculating on future trades is generally a fool’s errand for anyone who isn’t well-connected to people embedded in an NHL organization, but even the most passive observer should be able to deduce that the Canucks’ don’t exactly have the assets to pull off a blockbuster deal and improve in the process. There have been rumblings that Sam Reinhart is interested in playing on the west coast, for example, but the pieces Buffalo would be looking for in return —Brock Boeser, Vasili Podkolzin, even Nils Hoglander— should all be non-starters at this stage in the team’s life cycle.

After taking an inventory of what the team has done since 2014, it should be obvious that the Canucks’ can’t afford another aggressive offseason from Jim Benning. What the Canucks should be doing is what they should have been doing all along: hunting for bargains and building up a solid supportive group around Pettersson, Hughes, Boeser, Bo Horvat, and co., waiting for those players to peak, then push their chips in.

Fans don’t want another all-in push to make the playoffs and maybe win a round. They want a long-term vision that leads to a Stanley Cup. And with the team continuing to push making the playoffs as the ultimate goal, that dream feels as far away as ever.