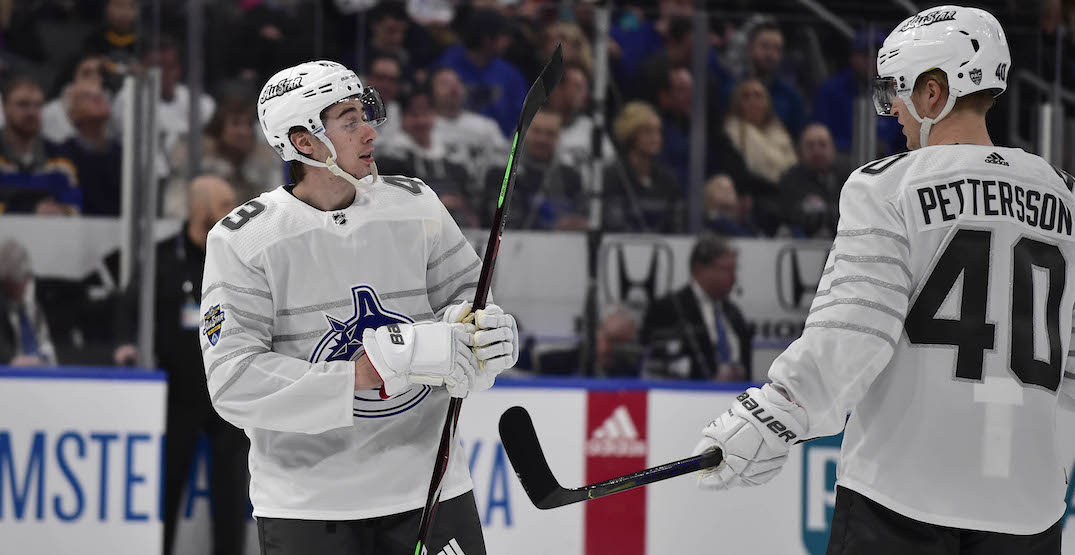 Contract negotiations have begun between the Vancouver Canucks and their two biggest stars, Elias Pettersson and Quinn Hughes.

Both Pettersson and Hughes are pending restricted free agents and have hired the same agency, CAA Hockey, to represent them. Pettersson is represented by J.P. Barry, while Pat Brisson represents Hughes.

“There’s been multiple talks,” said Barry in an interview with Don Taylor and Rick Dhaliwal on CHEK television this morning. “We’ve started the dance, we’ll have to keep going for a little while here… but we definitely are engaged, and hopefully, we can make some progress.”

Pettersson has more leverage than Hughes, given that other teams can put the screws to the Canucks by sending the 22-year-old Swedish centre an offer sheet. Hughes, who is one year younger than Pettersson, hasn’t played enough pro seasons required for Group 2 RFA status and is thus ineligible for an offer sheet according to the NHL’s collective bargaining agreement.

Barry indicated that many of Pettersson’s comparables signed “shorter-term” deals, but he isn’t ruling out a long-term deal — but likely not more than five years in length.

“We’re going to look at everything, but I think anything for Pettersson will be five [years] or under, and then we have to look at with Quinn whether or not we can do a little more or not. We’ll probably explore some of that, but that’s where we are right now.”

But there’s also something else at play here: the Canucks’ woeful salary cap situation.

“The reality is Vancouver’s cap is an issue here. I don’t think they can do long-term deals for both [Pettersson and Hughes],” said Barry. “I think some of the defencemen comparables have some term on them, and we’ll start seeing whether they fit in or not.”

Barry added that it’s easier to figure out Pettersson’s value on a three-year term, given many of his comparables signed that length of deal.

Pettersson comparables that have signed three-year deals recently include Mathew Barzal, who signed a $7 million AAV contract in January, and Brayden Point, who inked a $6.75 million AAV deal in September 2019.

Other young star centres who have signed new deals recently include (data courtesy of CapFriendly.com):

Contracts that could come up in Hughes negotiations include:

GM Jim Benning has indicated that the team is considering using the buyout option this offseason, which could help matters, but certainly won’t fix everything.