Planners from Seattle have long looked at Vancouver’s park and seawall edged waterfront with envy, and they are now one step closer to having their own equivalent or better.

Seattle City Council approved a draft plan on Monday to create a new local improvement district that will create a new tax on property within the downtown area to help fund the construction of a new park and open spaces along the city centre’s waterfront. 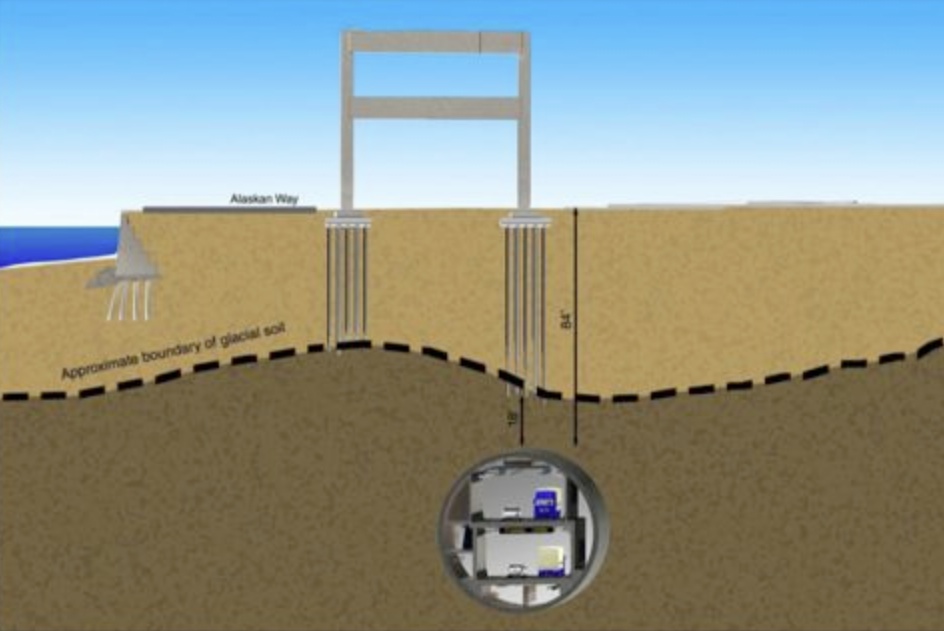 This is all part of the 3.2-km-long, four-lane Alaskan Way Viaduct replacement tunnel project, which replaces the existing elevated viaducts at a cost of $3.3 billion USD. It buries the elevated State Route 99 freeway to create new surface space for other public uses.

The waterfront renewal project was stalled due to complications with the tunnel boring project, but after two years of delays, the bored tunnel structure reached completion in April 2017. 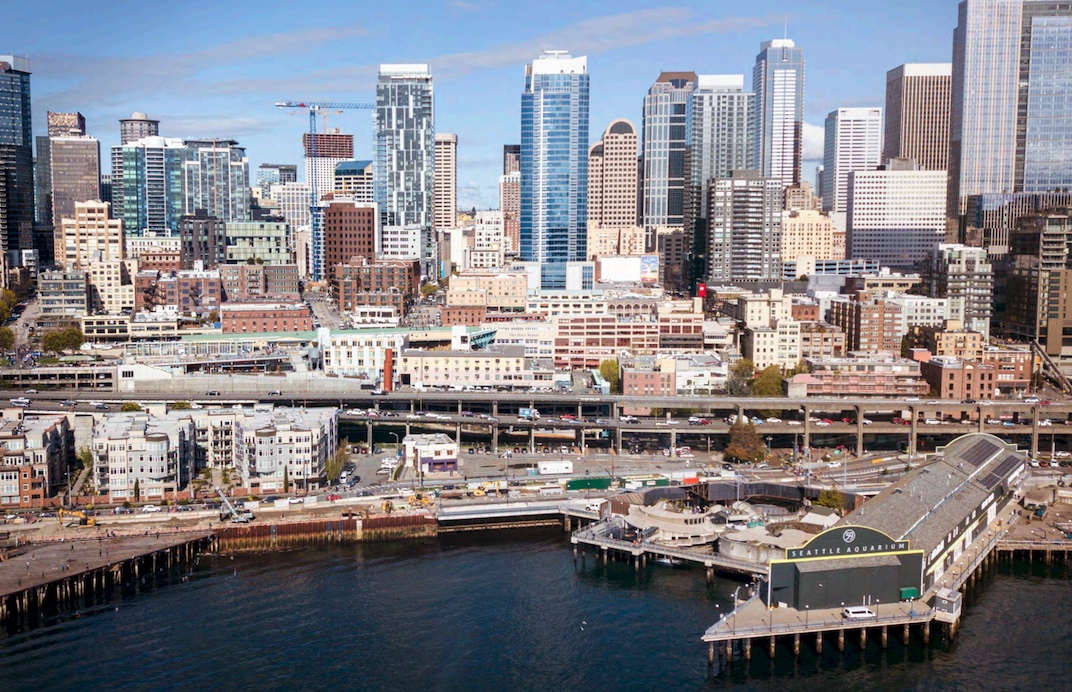 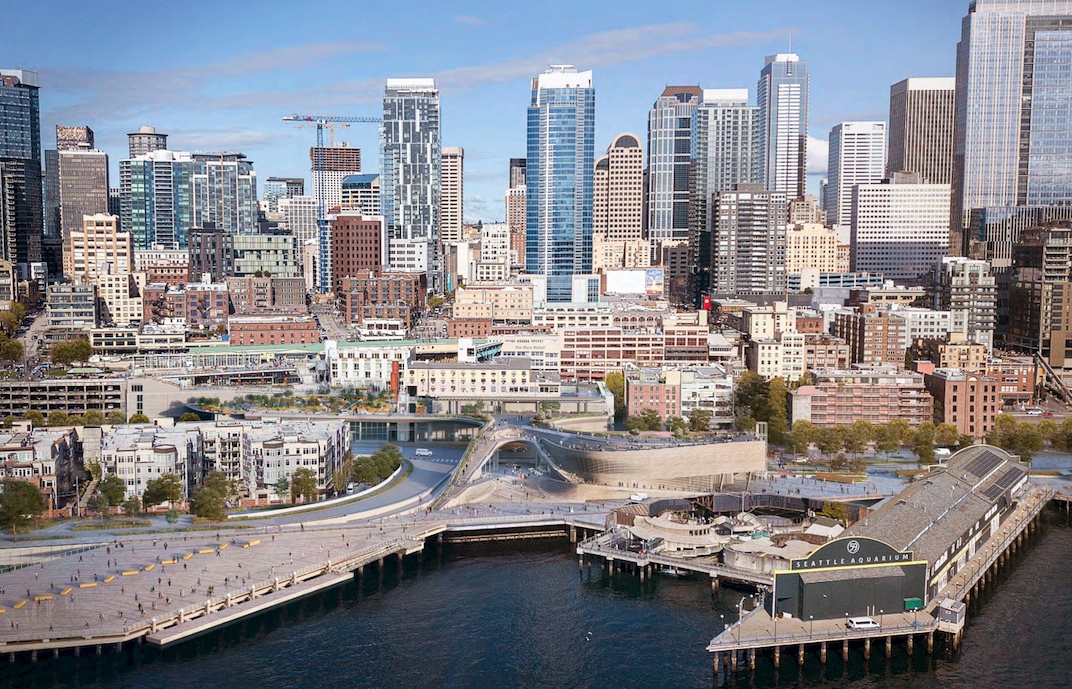 After the viaduct is demolished, there will be new space to drastically improve access to the waterfront, create new plazas, green spaces, and a promenade over three km in length. Major attractions and landmarks such as the Seattle Aquarium, Pike Place Market, and Olympic Sculpture Park stand to benefit greatly from a complete overhaul to the public realm. 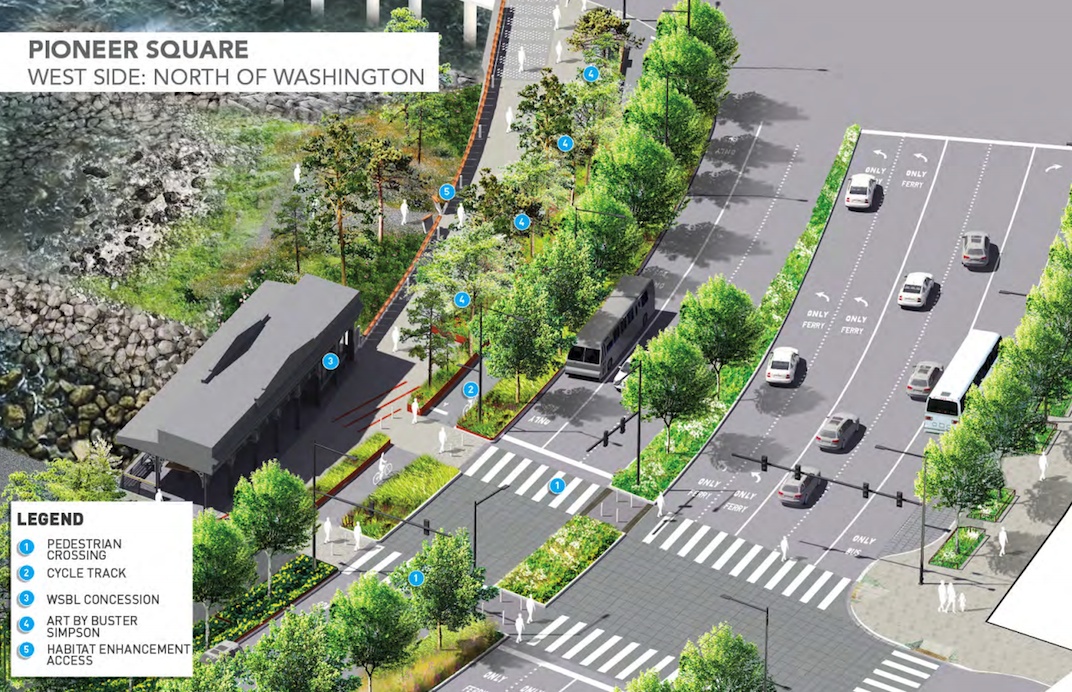 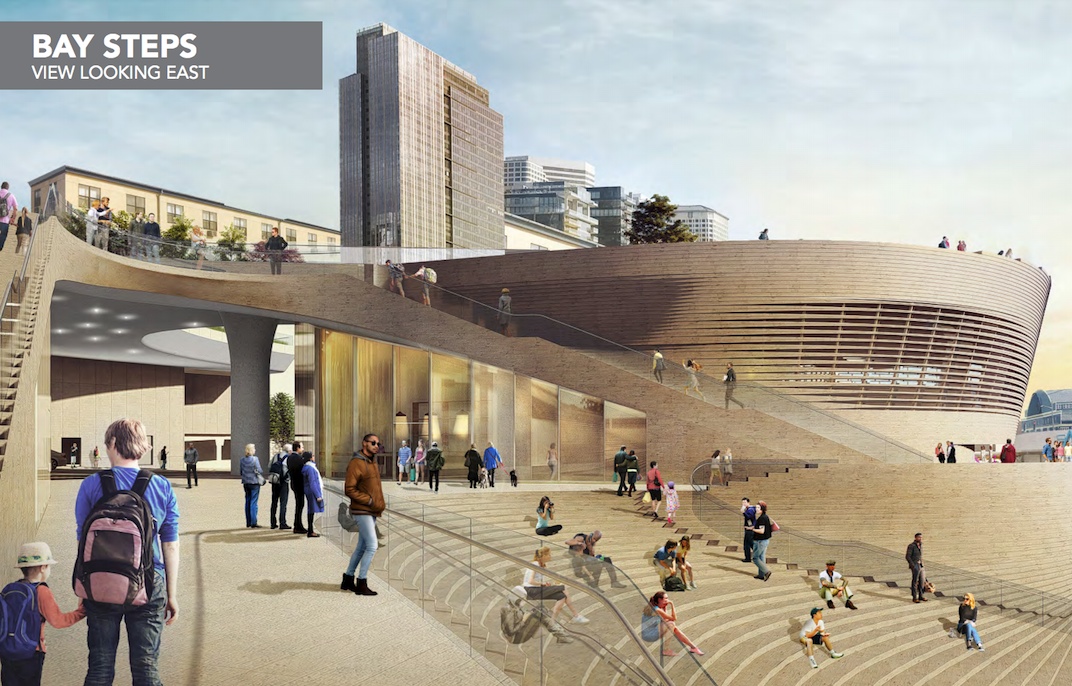 But the project has its critics, especially from property owners in the city centre that will directly fund the construction cost.

A sliding scale of tax rates based on the forecasted property value increase from the project is planned; those with properties located closer to the water will pay more, and properties further away will pay less. 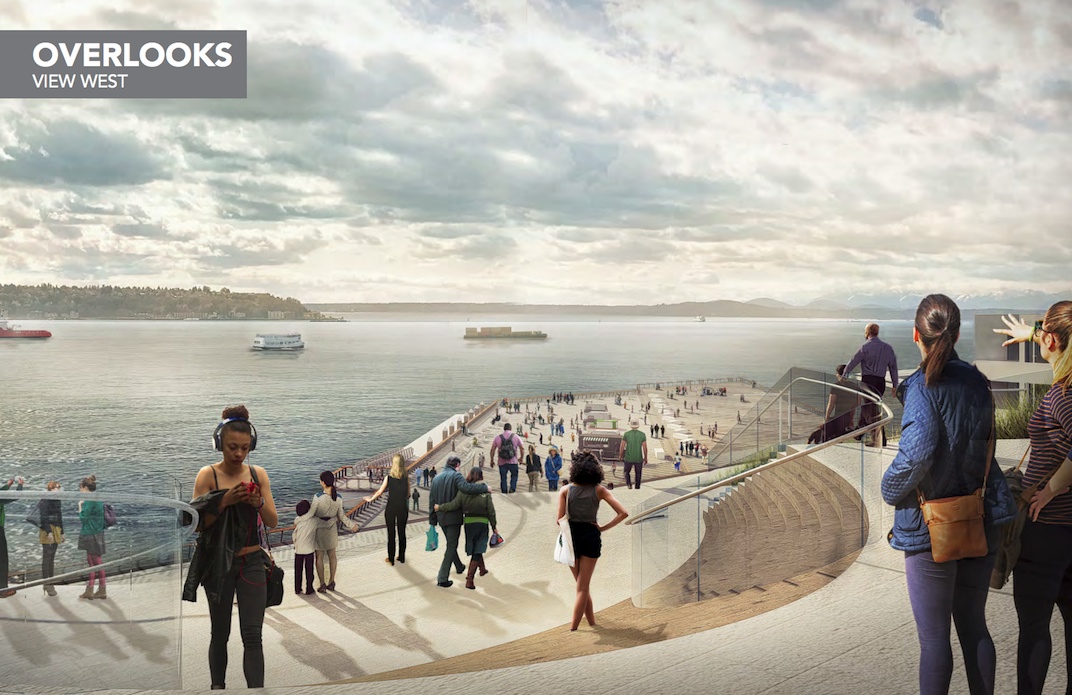 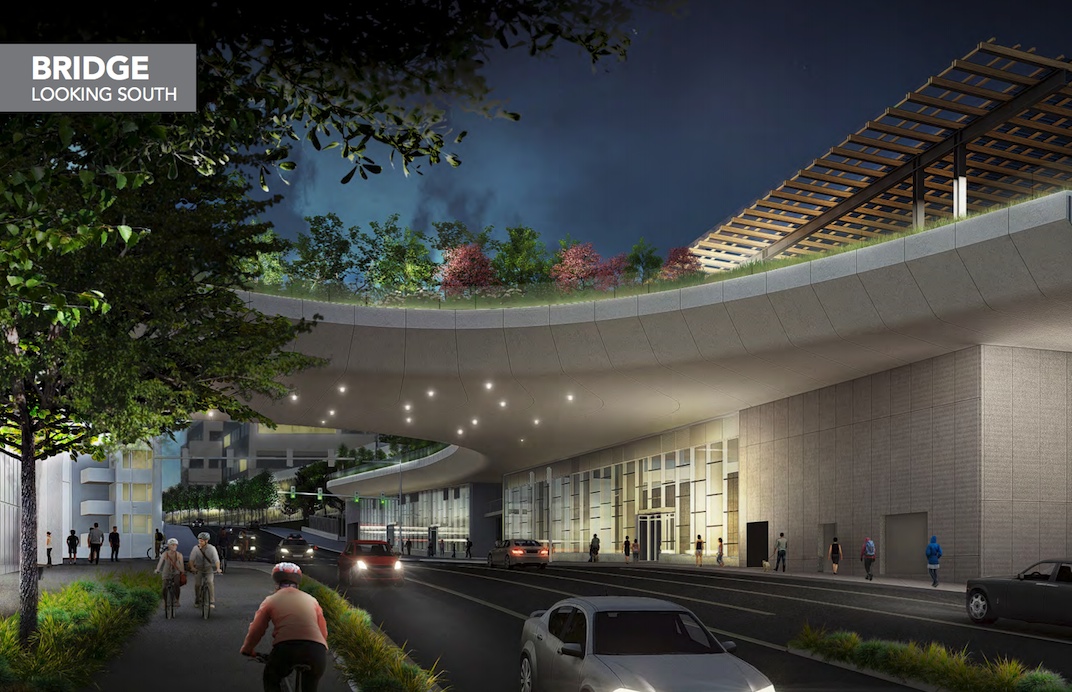 City officials assert this is the fairest way of covering a portion of the costs as these property owners stand to benefit the most from the improvements.

The City of Seattle has an online tool that informs affected property owners how much they could be paying.

Altogether, all properties within the new local improvement district stand to see a combined property value increase of $415 million USD, and property owners can either pay their tax in a lump sum or as instalments over 20 years with interest. 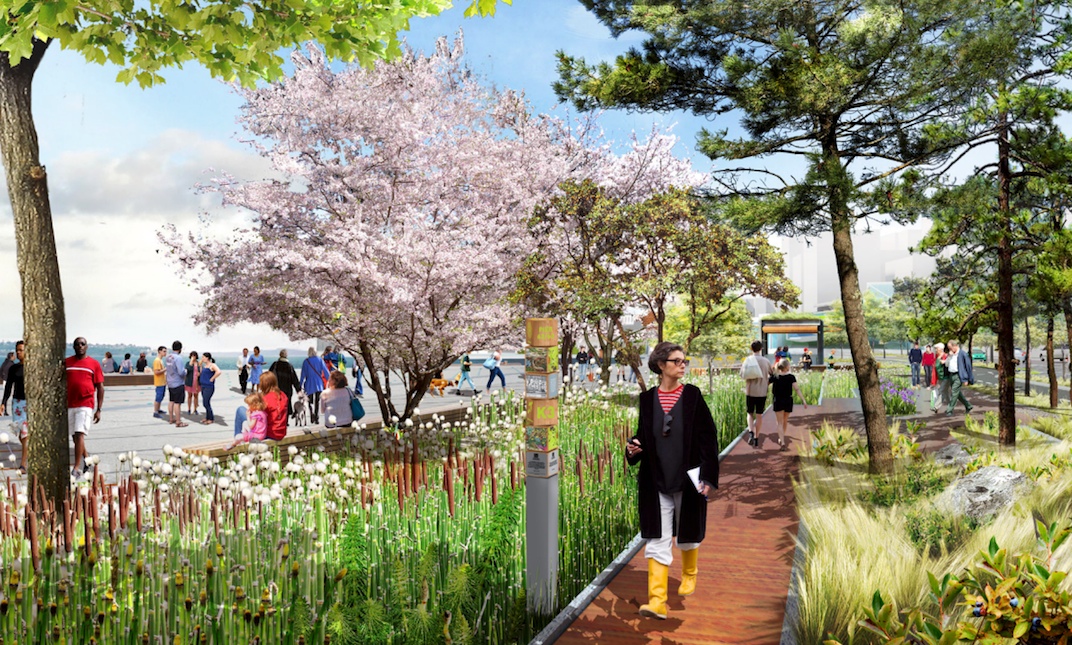 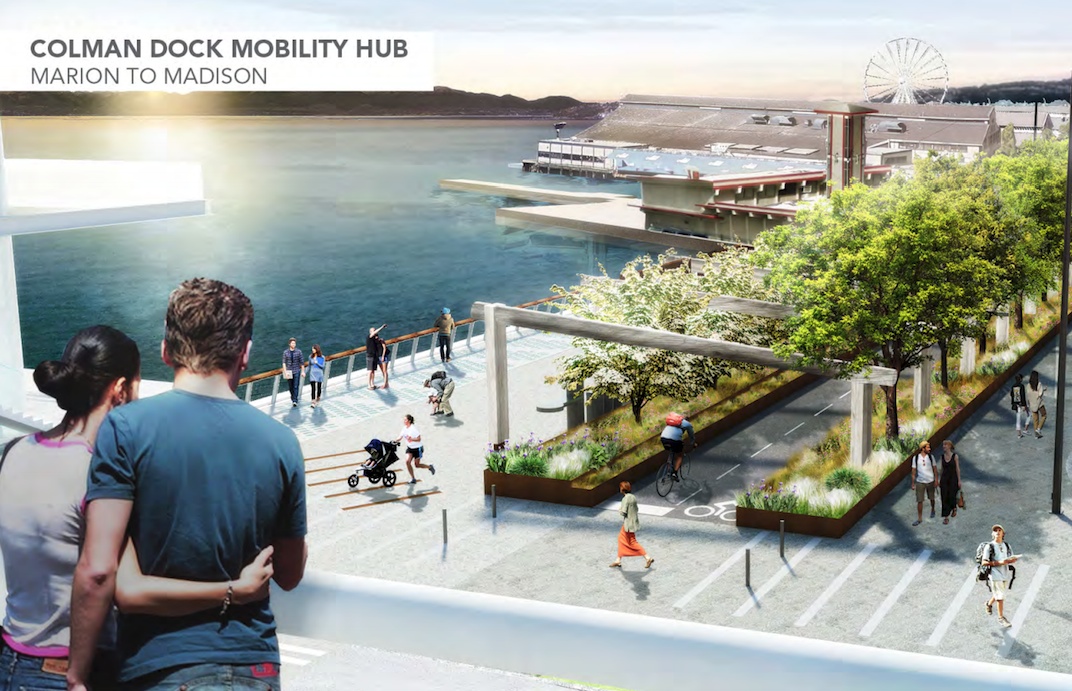 Further up north of the border, earlier this year the City of Vancouver approved a $1.7-billion plan for the demolition of the Georgia and Dunsmuir viaducts, which will be replaced with new social housing, public spaces and parks, and community amenities.

This includes an 11-acre expansion and redesign of Creekside Park and Andy Livingstone Park and a proper continuation of the seawall in the area. 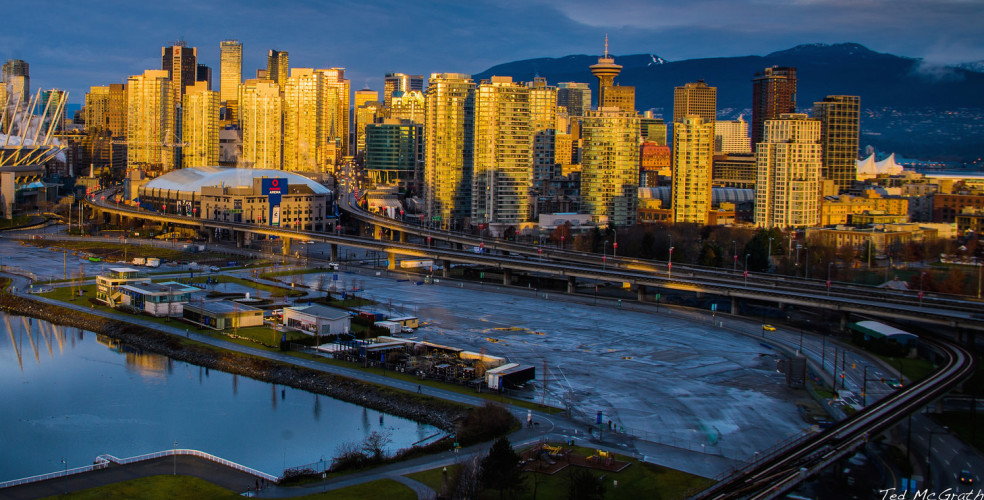 Commercial spaces – restaurants, bars, and pubs – from the private development component of the redevelopment will help transform the area into an entertainment and events district, with the two stadiums in the area as the anchors for activity.

Excluding privately-funded development – by Concord Pacific, Canadian Metropolitan Properties, and crown corporation Pavco – such as market housing and commercial spaces, the City of Vancouver’s costs for Northeast False Creek are as follows: 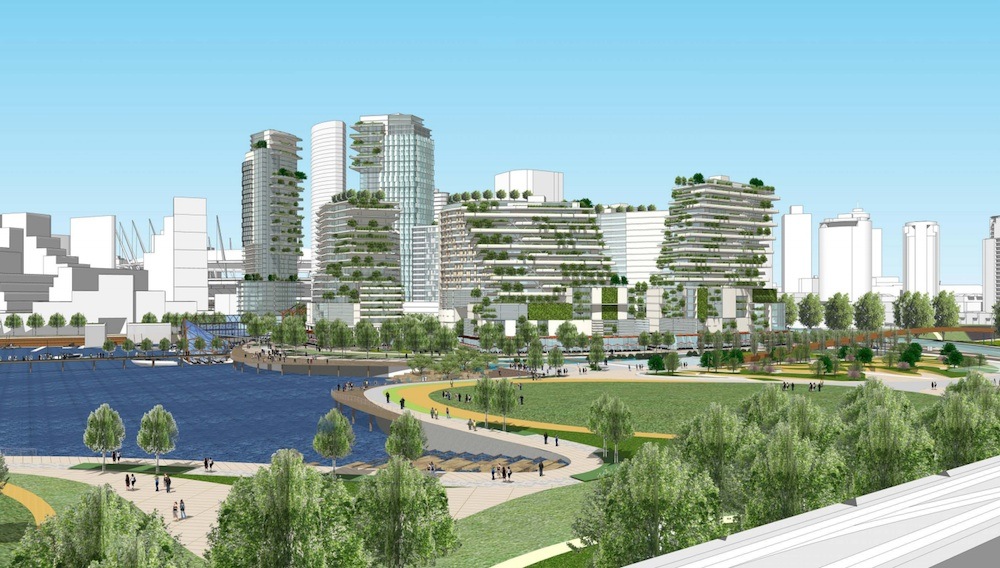 However, instead of Vancouver’s equivalent of a new tax from a local improvement district, much of the total cost will be recovered from community amenity contributions (CAC) and development cost levees on the new market developments in the area as a result of the Northeast False Creek Plan. This essentially passes the cost to the developer, who will then pass on the enormous CAC costs to the buyer.

It begs the question whether any of the market housing, the lions’ share of the total new residential stock built, will be affordable for middle-class incomes? 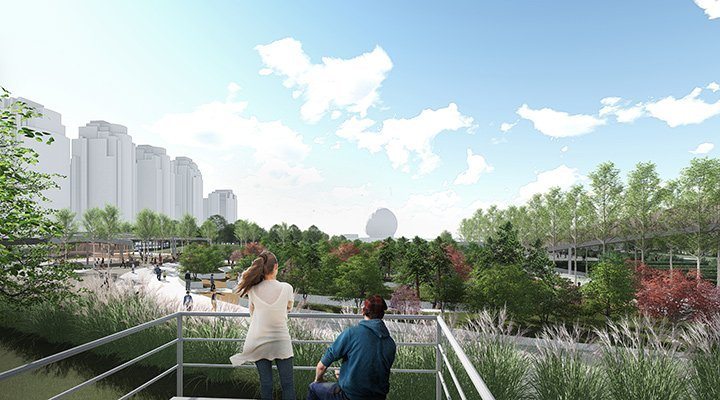 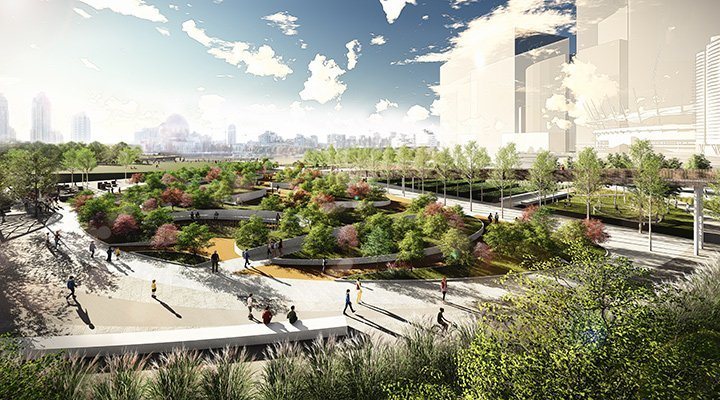 But this is the plan Vancouver City Council has chosen as it does not want to burden city taxpayers, at least not immediately.

A source who wished anonymity previously told Daily Hive there is a target for $1.2. billion to $1.3 billion from developers, which means as much as $500 million will be required from non-developer sources such as senior governments. It is unclear how the gap will be filled if senior governments are unwilling to contribute. 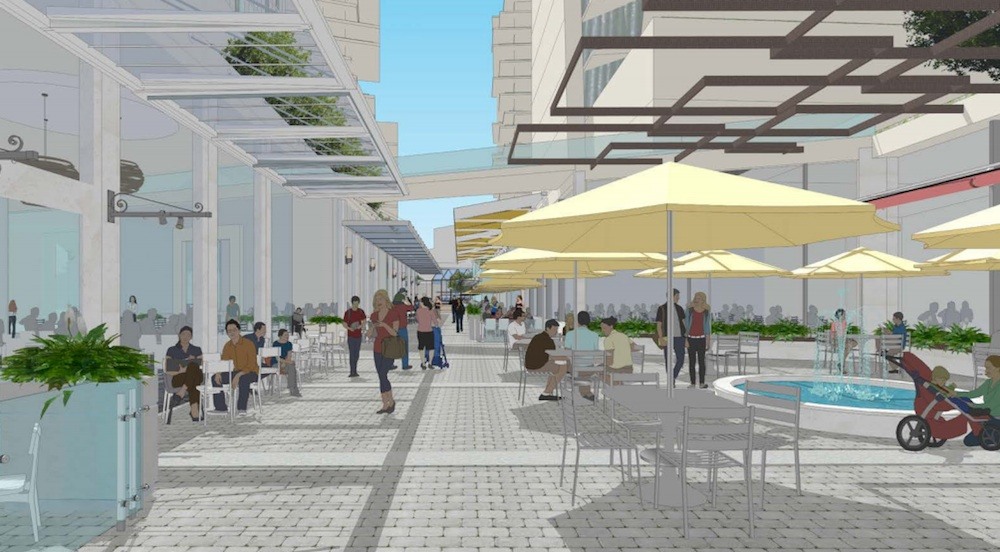 Questions remain over the impact to traffic. Northeast False Creek is about to become one of Vancouver’s densest areas, and there is already little flexibility and redundancy for the ingress and egress of crowds that attend events at BC Place Stadium and Rogers Arena.

Planners in Vancouver are moving forward with a new viaduct replacement street network that turns Pacific Boulevard into a single six-lane, bi-directional street with multiple intersections – a reduction from the current, combined 10 lanes on Pacific Boulevard, Expo Boulevard, and both viaducts (not too long ago, there were 12 lanes, before the bike lanes went in).

There will also be a new four-lane ramp extension (two lanes in each direction) of West Georgia Street between BC Place Stadium and Rogers Arena to connect with Pacific Boulevard. 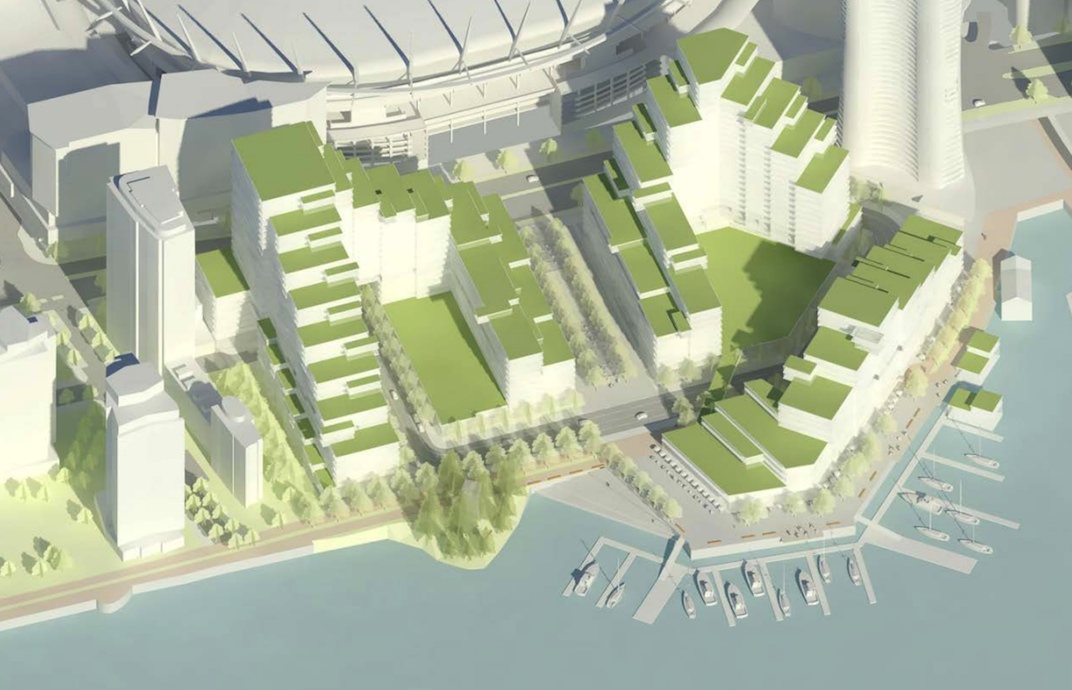 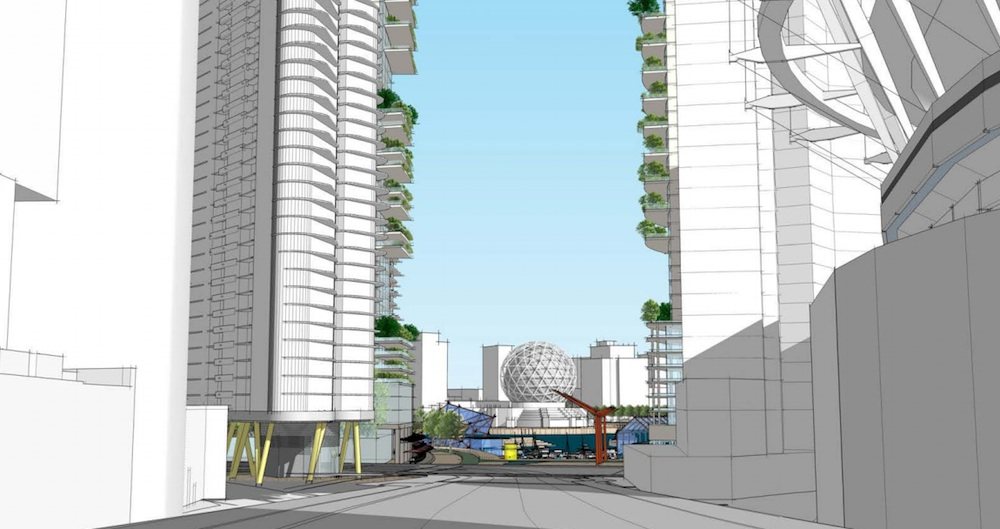 If all goes as planned, the Vancouver viaducts could be demolished in 2019, and redevelopments and new parks and public spaces will emerge between 2021 and 2025.

As for Seattle’s project, it has a similar timeframe of a demolition of the Alaskan Way Viaduct in 2019 and a full completion of the new public spaces by 2024. However, the full scope of the project, including the new local improvement district tax, is dependent on final City Council approval later this year. 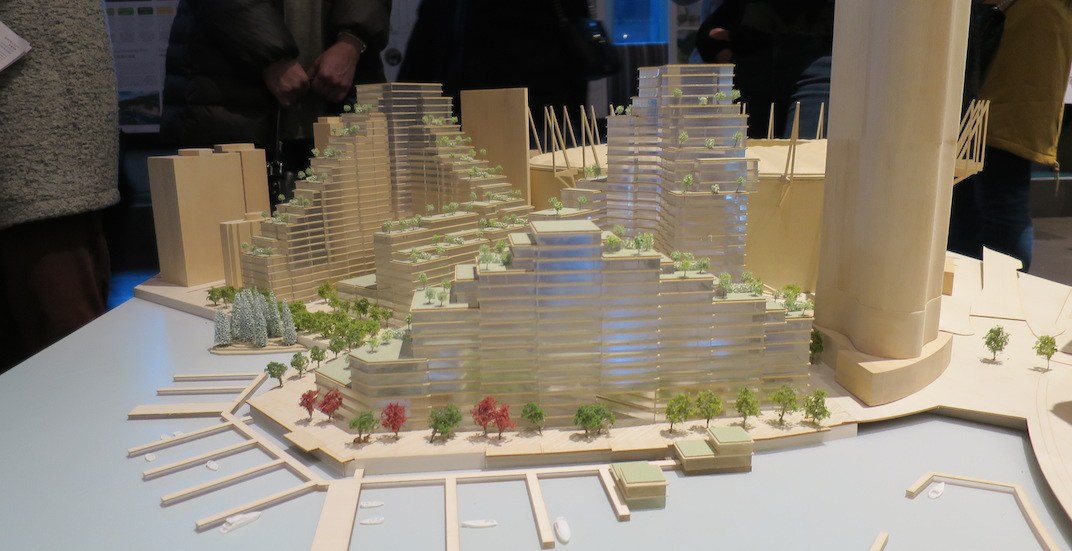 The Vancouver Canucks practice arena will be located within a new community centre as part of the Plaza of Nations redevelopment in Northeast False Creek. (Kenneth Chan / Daily Hive) 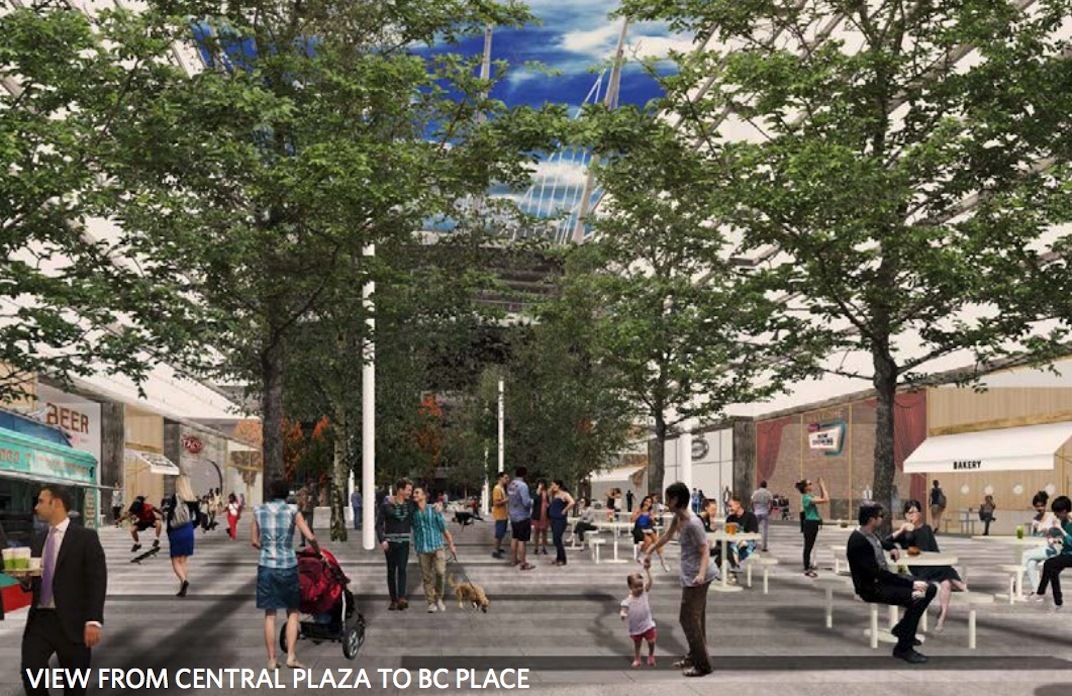 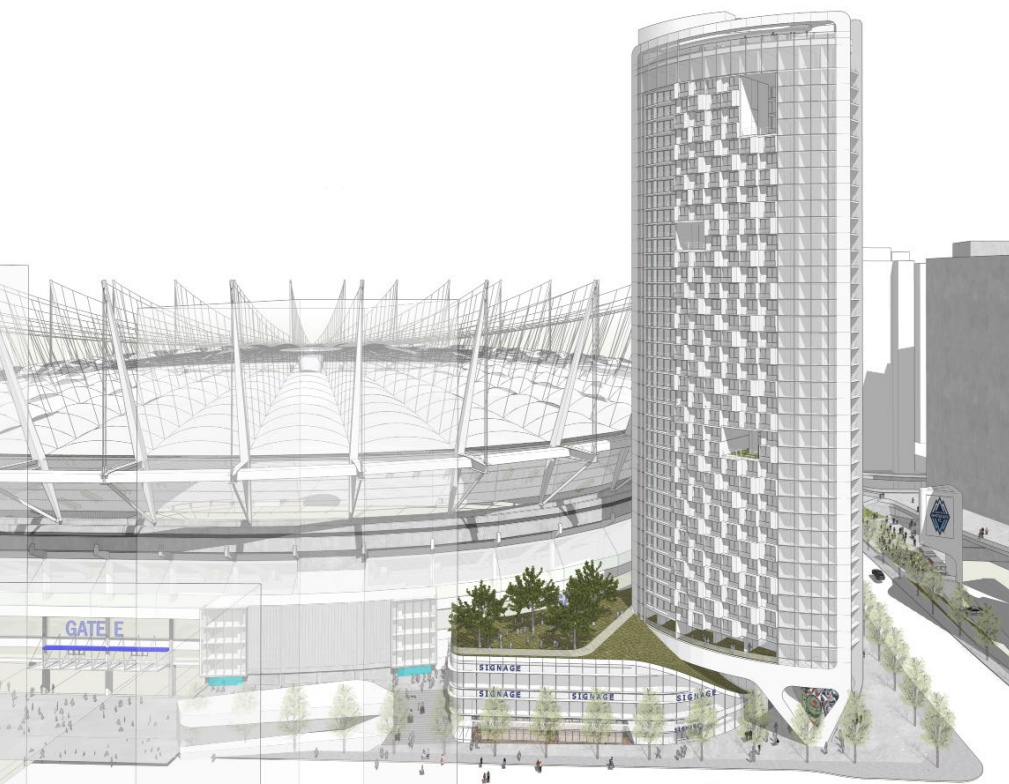 Correction: The article has been amended to state the Alaskan Way Viaduct tunnel replacement project will cost $3.3 billion USD, not the old estimate of $4.5 billion US.