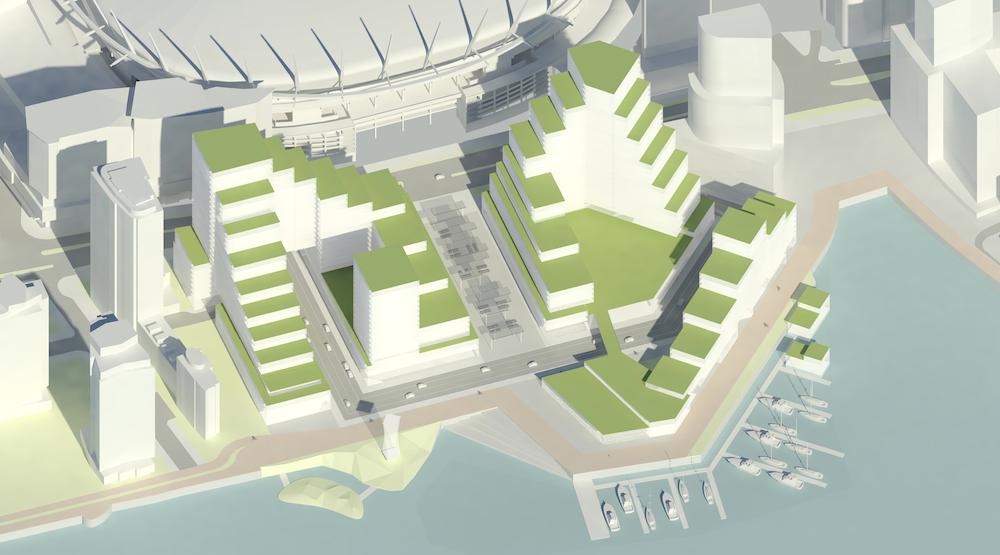 The redevelopment of the Plaza of Nations on the northeast shore of False Creek promises to provide Vancouver’s waterfront with the city’s most vibrant entertainment district.

Canadian Metropolitan Properties (CMP), the owner of this portion of the former World’s Fair site, first submitted an initial rezoning application to the municipal government in 2012.

But those plans have since been revised significantly in favour of building something with “a sense of place” that the waterfront does not currently have.

The 1.4 million ft² redevelopment is set to combine housing, commercial and office space as well as a major community centre; but it’s biggest focus is on public space.

This is all contained within two green building massings that are designed to mimic the mountains that frame the city.

Rising 30 storeys in height they will have a series of cascading green roof terraces that gradually rise from the seawall towards Pacific Boulevard. Much of the terrace space on the lower three levels will be open to the public as plazas, an extension of the public realm.

“There are very few places in Vancouver where you can get a multilevel view of the ground,” said local architect James Cheng. “Most buildings are either a tower or private buildings, so to create south-facing terraces that people can enjoy will multiply the amount of space available open to the public.”

The heart of the new entertainment district will be a 100-ft-wide pedestrian spine perpendicular to BC Place Stadium and Pacific Boulevard.

Built down the centre of the project, it will be completely lined with restaurants, bistros, bars, and craft breweries to create a place for people to gather before and after events at both BC Place and Rogers Arena or for people simply enjoying the waterfront.

“Lots of cities have places like this for people to go, but we don’t,” said Cheng. “This is also a response to a lot of criticism that we have received from visitors that Vancouver is a great city surrounded by beautiful seawalls, but there is nothing to do along the seawall apart from biking and walking.”

“There are hardly any places to stop for coffee, a glass of wine on the water, or just to gather on the waterfront, so the intent here is to create a district where people can enjoy the water in a way that isn’t solely recreational.”

The spine could be partially covered to provide protection from the elements. 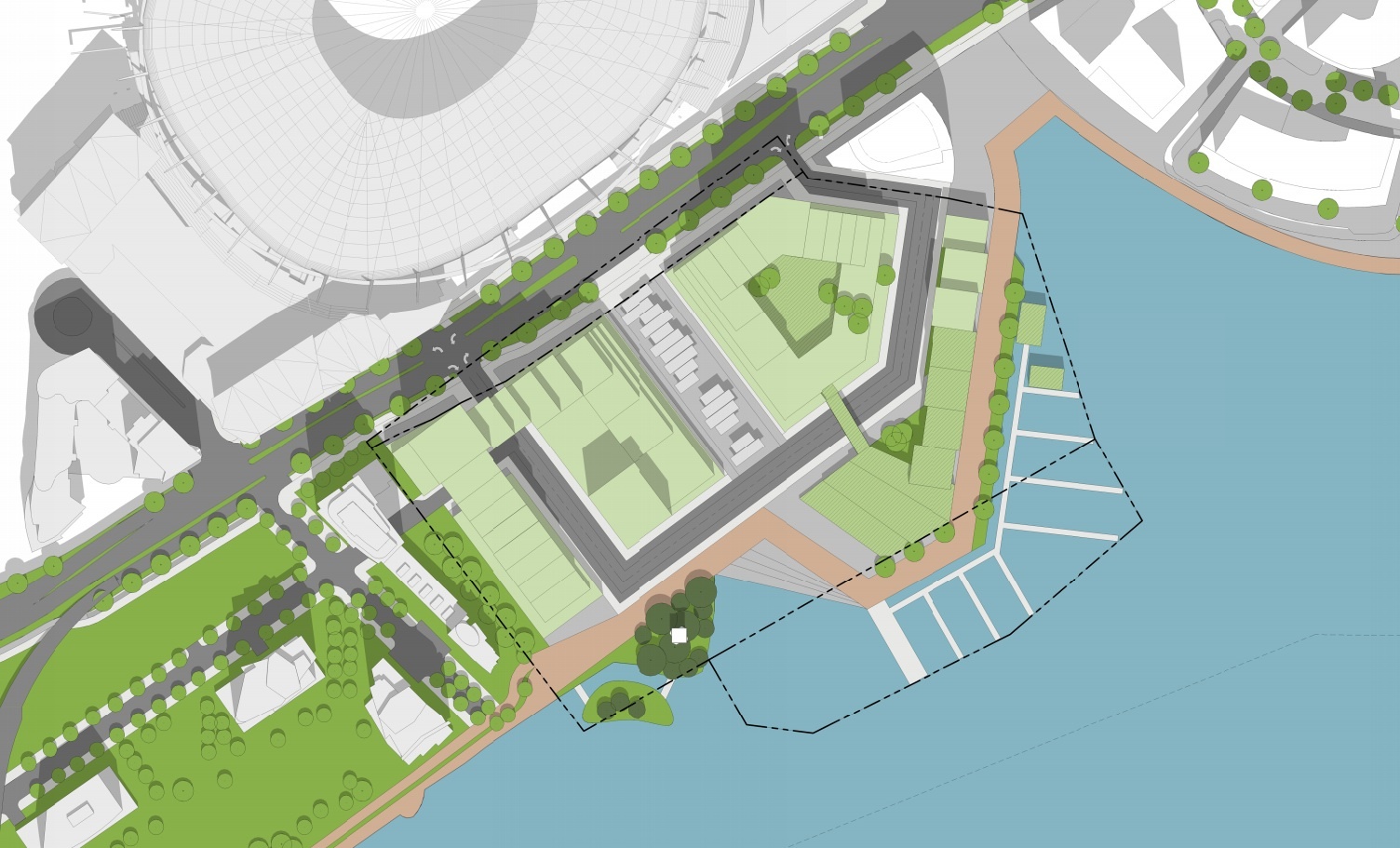 Aerial view of the redevelopment concept for the Plaza of nations. (James Cheng Architects)

Concord Pacific is planning a similar commercial-oriented development for its adjacent property east of the Plaza of Nations.

When both redevelopments are combined, and with the completion of the Parq Vancouver casino resort, Cheng says the area will be Vancouver’s equivalent to Singapore’s Boat Quay and Sydney’s King Street Wharf and Cockle Bay Wharf.

And by having a large residential population in the area, it will help ensure the businesses and vast public spaces can stay alive and vibrant year-round.

New major entrance into BC Place

Cheng also says BC Place plans to adapt to its new urban environment by building a new major entrance on Pacific Boulevard directly across from the redevelopment’s pedestrian spine.

This ground-level entrance will provide an ability for events like the Sun Run to directly walk from Pacific Boulevard to the stadium’s field.

Along with the entrance, the edge of the stadium facing Pacific Boulevard will be redesigned and infilled with restaurants and bars to enhance the street experience and new public realm.

A wide ground-level crosswalk across a new two-way Pacific Boulevard, as part of the new road configuration from the demolition of the Georgia and Dunsmuir viaducts, will connect the new entrance with the spine and waterfront, replacing the existing pedestrian overpasses which will be demolished.

Cheng says the design abandons the use of the traditional tower and podium concepts that Vancouver has been known for since the 1990s as people simply did not want more of the same designs.

As well, he says people have grown fond of the BC Place Stadium’s crown-like roof and nighttime lighting display.

There were some concerns that developments in the area would create a wall of towers that effectively block all views of the stadium from False Creek, but Cheng’s design mitigates that to an extent.

The proposed redevelopment frames BC Place Stadium’s iconic roof instead of completely obscurring it from view. (James Cheng Architects)

“When BC Place was first built or under construction, some people hated it, but a lot people now seem to like it especially with the exterior Northern Lights display,” he said. “One of the most common feedback we got was people wanted to maintain some of the views of the stadium from the water, and I think that’s correct as it’s an iconic building for the city.”

The terraces will essentially “frame” BC Place’s iconic roof, from the point of view from across False Creek at the Olympic Village.

A community centre incorporated into the redevelopment will include a new permanent practice ice rink for the Vancouver Canucks, and the facility will be open to the public when they are not practicing. There will also be a daycare as well as a sports medicine facility for both athletes and the public.

The municipal government’s plan for the area calls for a new multi-purpose civic plaza on the False Creek waterfront, possible at the new southern foot of West Georgia Street between the CMP and Concord Pacific redevelopments.

Large paved gathering spaces in the city are scarce, and resorts in activities overflowing onto the street with closures. Such plaza spaces are limited to the Vancouver Art Gallery’s North Plaza and Jack Poole Plaza.

An early artistic rendering of the new False Creek civic plaza next to the Plaza of Nations redevelopment. (James Cheng Architects)

First conceptual design in 2012 of the Plaza of Nations redevelopment.
(James Cheng Architects)

The City of Vancouver will host an open house block party on the Northeast False Creek draft area plan at Andy Livingstone Park on Saturday, June 10 from 11 am to 7 pm.