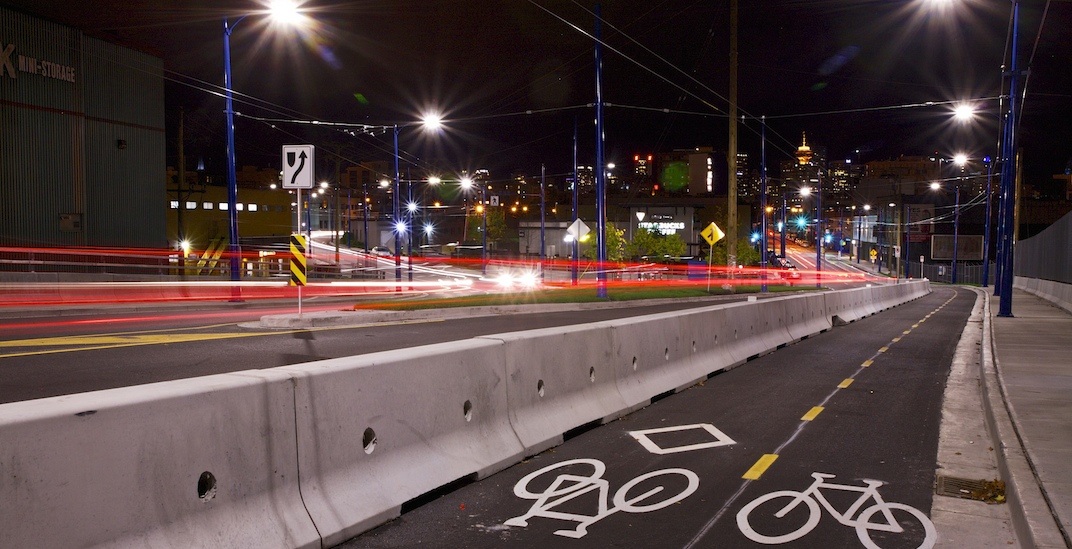 The Powell Street overpass a few blocks north of the False Creek Flats was completed in 2014 to eliminate traffic delays from freight rail. (shockk / Flickr)

The next steps are being taken by the City of Vancouver on its long-held proposal to build a new major arterial road through the False Creek Flats from the eastern edge of downtown Vancouver to Clark Drive.

Starting this spring, a community panel of randomly selected residents and business owners will be created to begin the next phase of public consultation for the project.

The project’s main objective is to provide the road network with grade separation from the busy freight railway corridor to the Port of Vancouver’s Centerm terminal.

Growing rail traffic from CN has increased delays to vehicles where the railway crosses the busy arterial route at Prior/Venables Street. According to the municipal government, this crossing sees an average of 12.5 blockages per day, with each blockage lasting for about 6.5 minutes each.

And these blockages can be quite disruptive to traffic given that many of the train crossings occur during the day, with the highest loads during the early afternoon and evening peak periods, based on a count last fall. 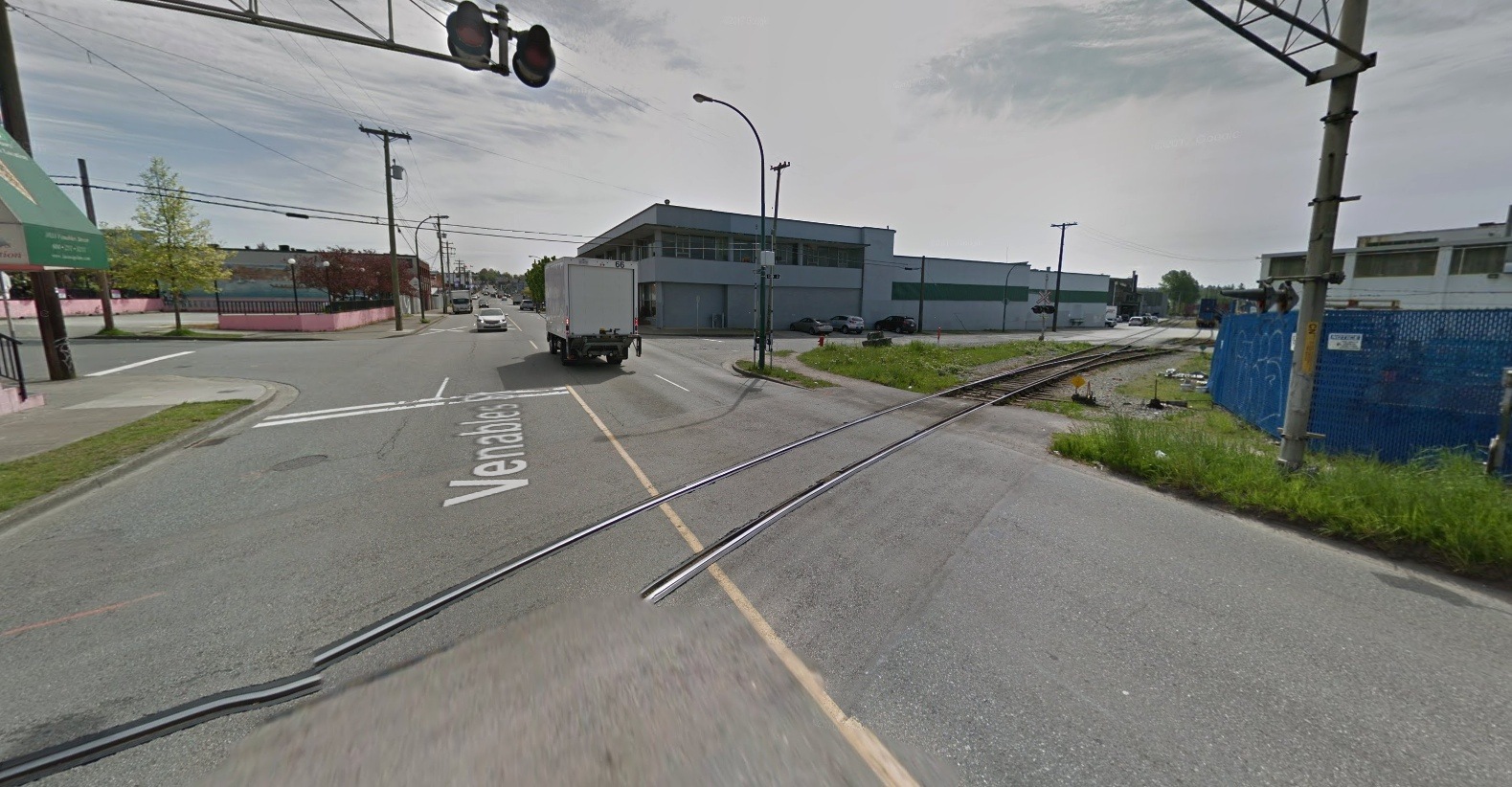 Two options are being seriously considered for the new arterial road, which includes an overpass over the railway.

Each option begins at the eastern end of the future new arterial road through the Northeast False Creek area, replacing the Georgia and Dunsmuir viaducts. All options run immediately north of the planned site for the new St. Paul’s Hospital campus at the northwest corner of the False Creek Flats.

The options range highly in costs – from $80 million to as much as $230 million, in addition to the expected $200-million cost to remove the viaducts:

The National Avenue option being considered runs along the northern edge of the future hospital site, past Trillium Park, and along Thornton Street, then onto National Avenue to Chess Drive.

The overpass would begin at Chess Drive, cutting through the City’s Fire Training Facility, and align with Grant Street to connect with Clark Drive, but it will require a longer structure to span the wider section of the railway yard at this location. This route is also longer given the detour. 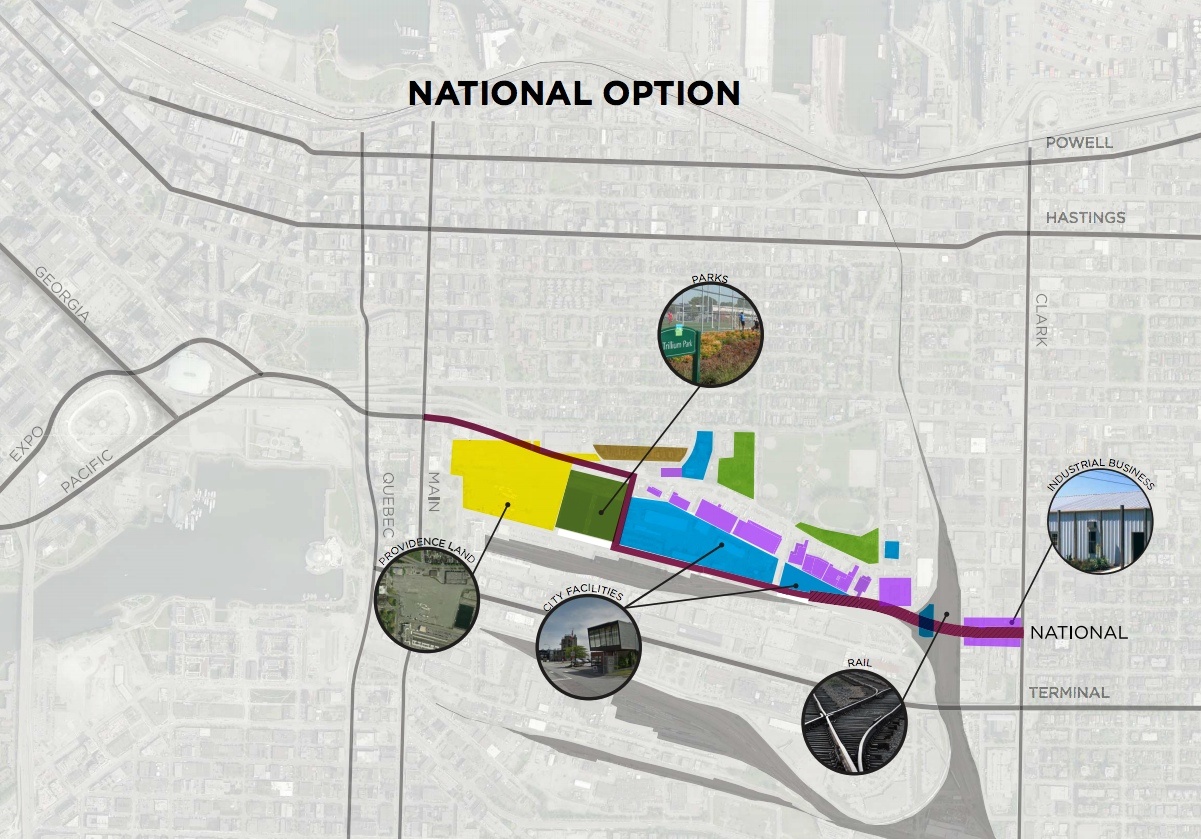 There are added costs to this option as it impacts the National Works Yard, requires the relocation of the Chess Street Fire Training Facility and Heavy Urban Search and Rescue facility. The City says these facilities would be expensive to relocate and rebuild, and no suitable alternative sites for their replacement have been identified.

Significant property acquisitions are required for an arterial route along National Avenue.

Some other concerns with this option deal with the performance and safety of the required road curvatures at Thornton Street given that this is intended to be an arterial route.

This option could cost between $150 million and $230 million:

The overpass starts at Raymur Avenue, passes over Glen Drive, railway tracks, Vernon Drive, and aligns with Charles Street to connect with Clark Drive. The length of the overpass on Malkin Avenue is much shorter than the National Avenue option. 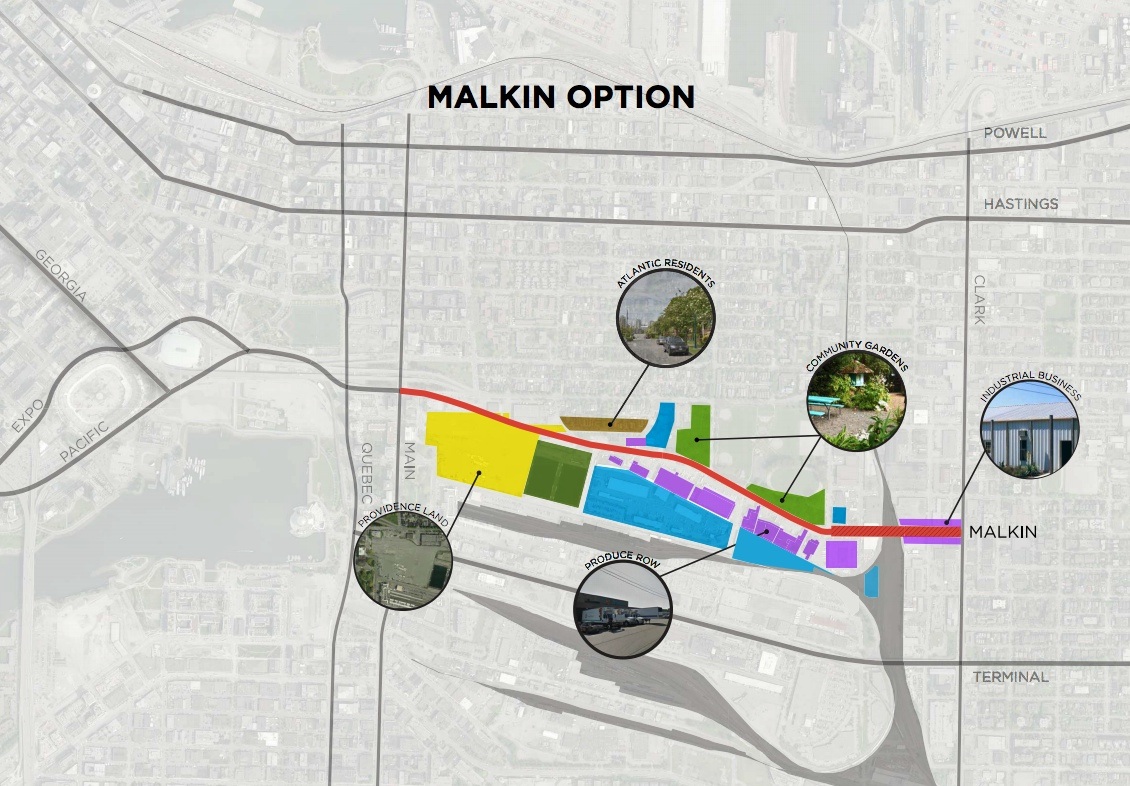 The impacts include the removal of a community garden and the restriction of truck loading operations of several Produce Row businesses. There are about 4,000 truck deliveries at Produce Row each week.

This option could cost between $80 million and $130 million:

The William Street option is no longer being considered for implementation due to neighbourhood opposition early in the consultation and exploration process. While it takes a direct route and enables a shorter overpass structure like the Malkin Avenue option, it will run through Strathcona Park, splitting the park into two separate areas. 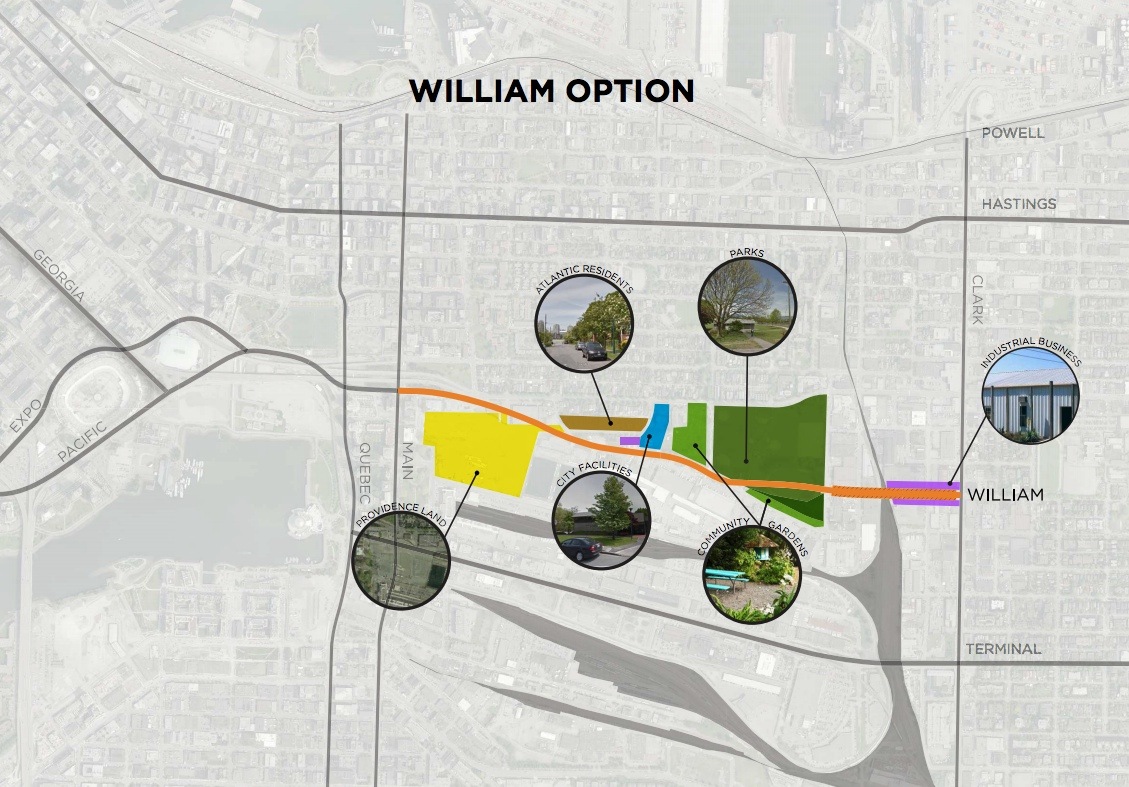 When the new arterial road and overpass are complete, Prior/Venables Street will be downgraded from an arterial to local street.

The City is drawing comparisons to this project with the Powell Street arterial overpass over another section of the same railway corridor to the Port a few blocks north. Delays from rail traffic were also an issue at this crossing, until the $50-million overpass was completed in 2014.