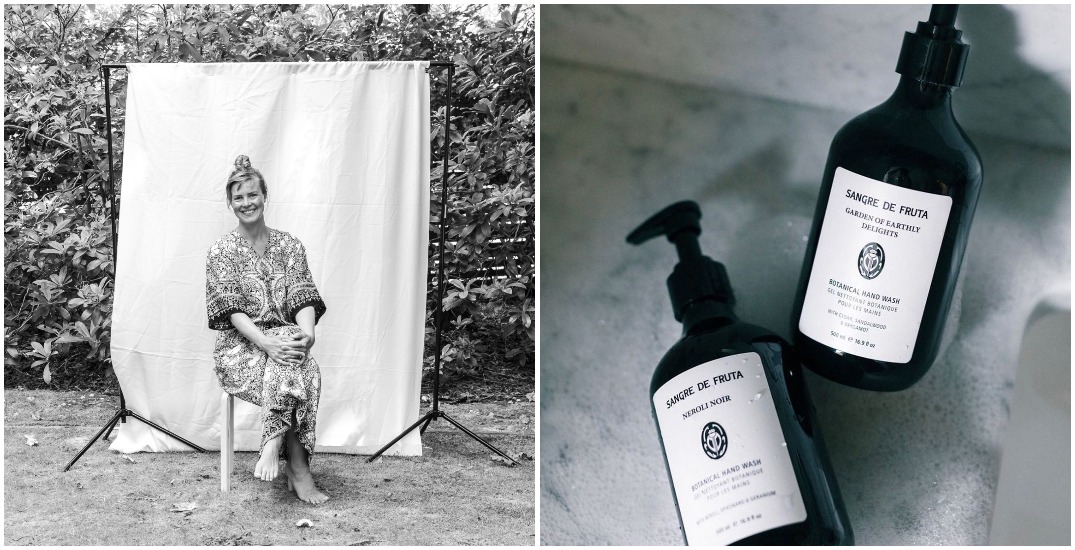 The brands’ bold black-and-white glass bottles have an architectural yet old world feel to them — just like the botanical concoctions they house inside.

Back in 2016, their initial product run caught the attention of major lifestyle player like goop (Gwyneth Paltrow’s online publication and shopping platform) — all while founder Allison Audrey Weldon was still blending the products in her West End apartment home.

“Goop didn’t know I was making the products in my kitchen!” Allison laughs, looking back on the hit that put her local, homegrown company, which is now based in Bowen Island, on the map.

The BC based entrepreneur had just six body creams housed in Sangre de Fruta’s signature black glass packaging when Weldon took a chance and emailed the goop team five years ago. 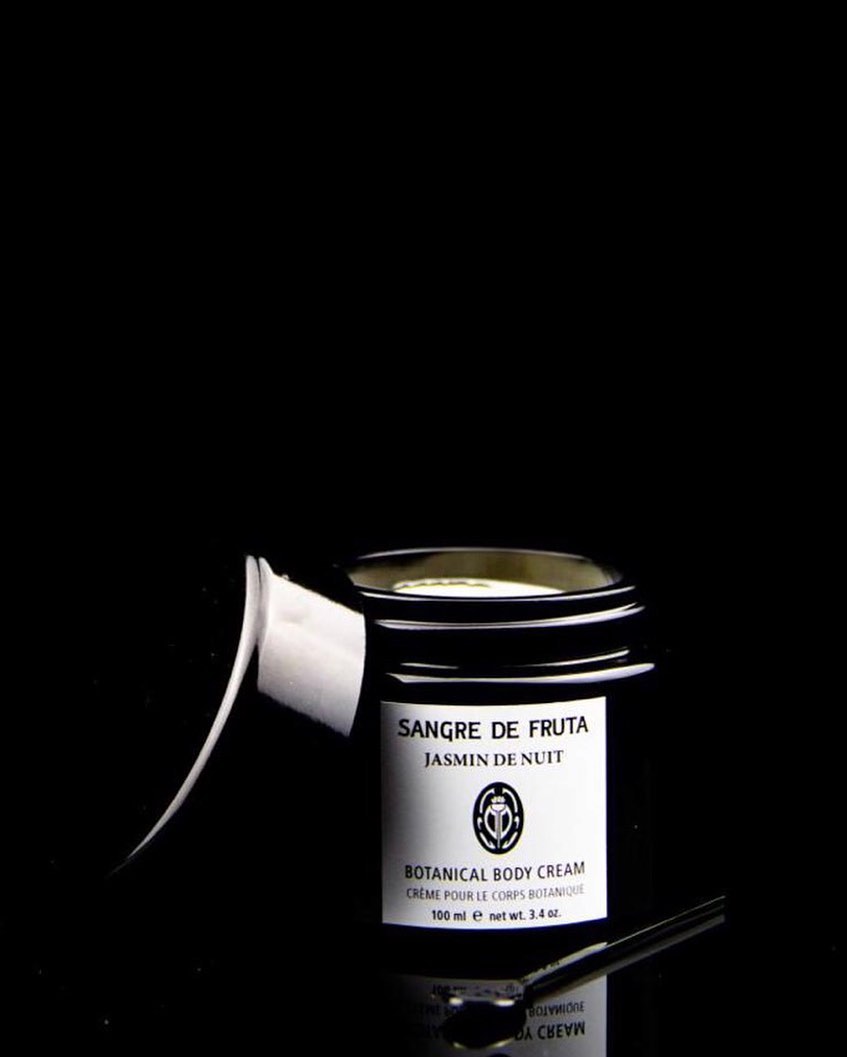 “It was a hustle at the time. I was trying to get the product out there — even just in Vancouver to little stores,” she explains, adding that she was also sending emails out to retailers and media outside of the city from her West End apartment.

“Goop weirdly enough was like, ‘we want to take the collection’ and I was like, ‘what?’ It ended up being just one…but they’ve been supportive ever since,” the visionary lifestyle entrepreneur recalls.

“I was so impressed that that they were was confident enough to be like, ‘I like this. I don’t care if it’s something new’,” she shares, adding she’s grown “a lot” since then. 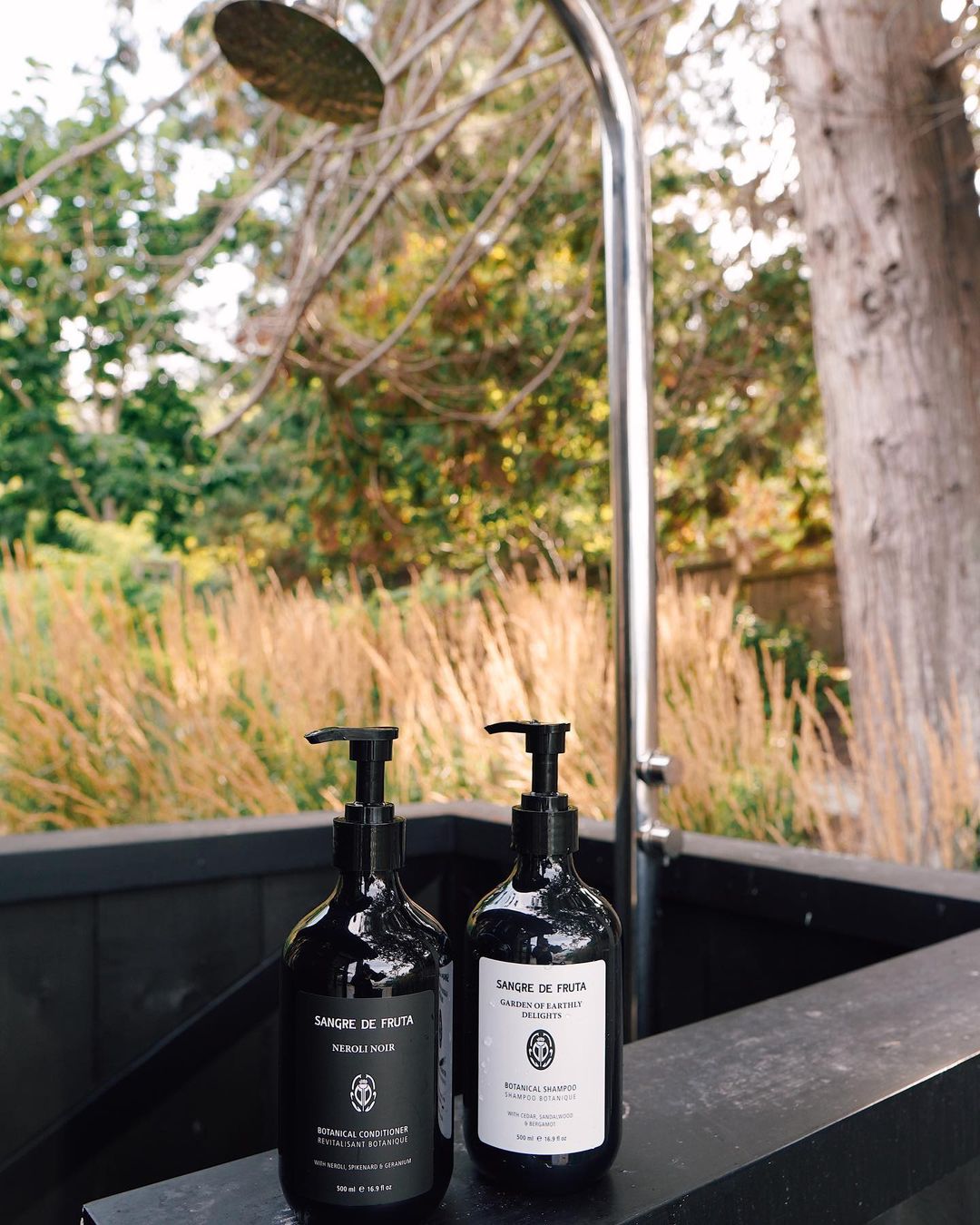 While the hand and body cream category remains a confident vertical for Sangre de Fruta, the company has experimented with different areas of wellness and beauty — successfully launching skincare and more recently, a revered hair product line.

Essential oils are the backbone of her clean beauty blends, including the Head of Roses (heavy on the red floral), hypnotic Neroli Noir (spicy sweet, with a dash of orange), and the Garden of Earthly Delights (inspired by a late 1400’s painting, featuring notes of bergamot, cedar, rosemary and sandalwood).

The scents are reminiscent of a Victorian apothecary — perhaps with a bit of witchy influence — which Allison says was inspired by her friend and mentor Elena Orrego. 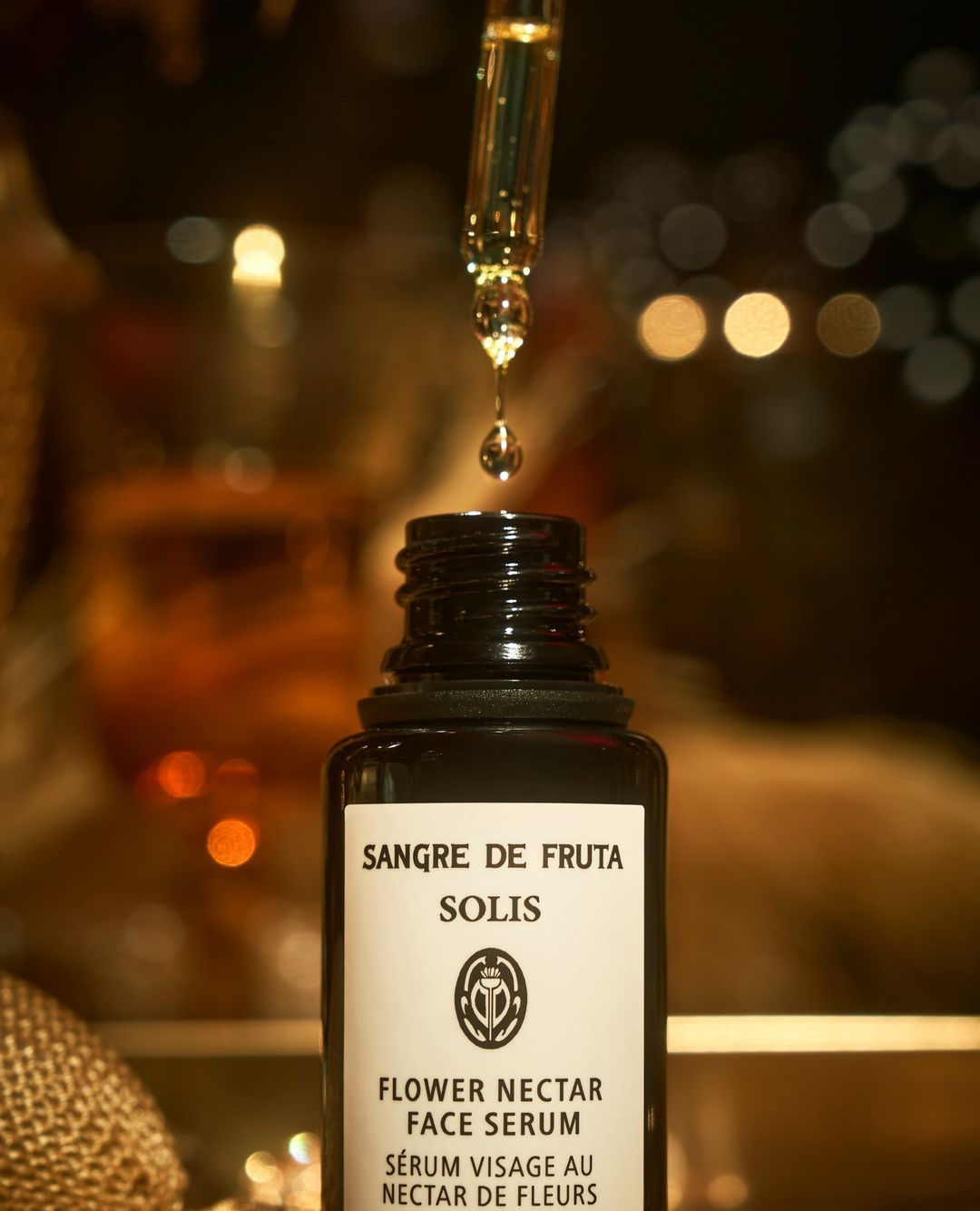 Orrego, who owned herbal apothecary Gaia Gardens for many years in Kitsilano, gave Allison her introduction to the rituals of ancient Egyptian beauty regimens, botanicals and essential oils that make up the DNA of Sangre de Fruta.

After Elena sold the business, however, friends continued asking for her products — particularly her indulgent body creams — and Allison began helping her as a side project.

“I went to her house and she had this cabinet full of these beautiful rare essential oils and and she loved it because she could actually [experiment]. Her products at Gaia Gardens had a more medicinal focus so it was fun for us to build on those formulas experimenting with scents and textures.”

At the time, Weldon was at a crossroads in her career that included a background in graphic design, fashion, and film.

After graduating high school, the Vancouver native made her first big move back east to Toronto where she studied fashion and communications at Ryerson University. Early on, she says, she didn’t feel like a “fit” within the cutthroat industry.

“I think I was disillusioned about fashion when I was in school. It wasn’t what I thought it was and I just had a feeling I wasn’t a fit there,” she recalls. Ultimately, she had yet to find her niche — which ended up being trend forecasting.

“I found this company called Future Labratory and they incorporated design, the culture of clothes and fashion into a bigger conversation about trends. I realized, ‘Oh, this is what I love,’” she explains.

After an internship, she went on to work for the company in London, where she lived for several years. While in the U.K., Allison cut her teeth in several other positions, including an internship at Condé Nast’s GQ, a bartending stint at a private members club, and a job in graphic design with fast-fashion retailer Topshop.

When Allison’s U.K. work visa ran out in 2008, however, things took a dramatic turn.

“I was devastated a job I wanted didn’t work out. And I came back to my parents’ home in Tsawassen,” she recounts of her 20s. “It was depressing — I had gone to the most amazing fashion shows in Europe…and now I was at home.”

Determined to get her life on track, Allison decided to take her first stab at entrepreneurship with an ex-partner.

“I had this dream lifestyle business idea to open a yoga studio and restaurant — there wasn’t really things like that yet, such as TurF in Kits now: an idea that married yoga with wine and Mediterranean food, with a European approach.”

After the business was opened, however, Allison found herself in an abusive relationship she quickly needed to escape.

“I was in an unsafe situation and I faced bankruptcy [after I left] as I had put so much of my own money into it,” she shares. “I had a really hard time getting back on my feet emotionally.”

Leaving both the relationship and business left Allison emotionally devastated and unable to work.

At rock bottom, she once again began thinking about her next steps — discovering a new career path applying her fashion background in the film and television industry.

“It was a really good community in Vancouver,” she says of Hollywood North. “I did that for a number of years before realizing I wanted to go back to being an entrepreneur.”

“At some point, people were asking for [our creams] every Christmas and I realized this was an opportunity for me to tie my history in graphic design and branding together,” she reflected, referencing her past career paths.

Initially, Allison thought the two could partner on a business together — however, Orrego was ready to hang her hat up.

“She said, ‘you go’,” Allison remembers. By then, the second-time entrepreneur had developed a logo and further developed the body cream recipes.

The Spanish name Sangre De Fruta (blood of fruit in English), however, is nod to Elena’s Chilean heritage.

“She was my inspiration and an incredible friend and mentor,” she praises.

The initial run of Sangre de Fruta was entirely self-funded by Weldon off savings and credit cards, which she says she’s “glad” she’s no longer doing. When creating a vision board for the brand, one thing was clear: she wanted Sangre de Fruta to be luxury in a different way.

“I didn’t really think of it as a beauty product — I thought of it as more of a luxury wellness brand,” she explains of her goal. “And I wanted it to be for anyone.” 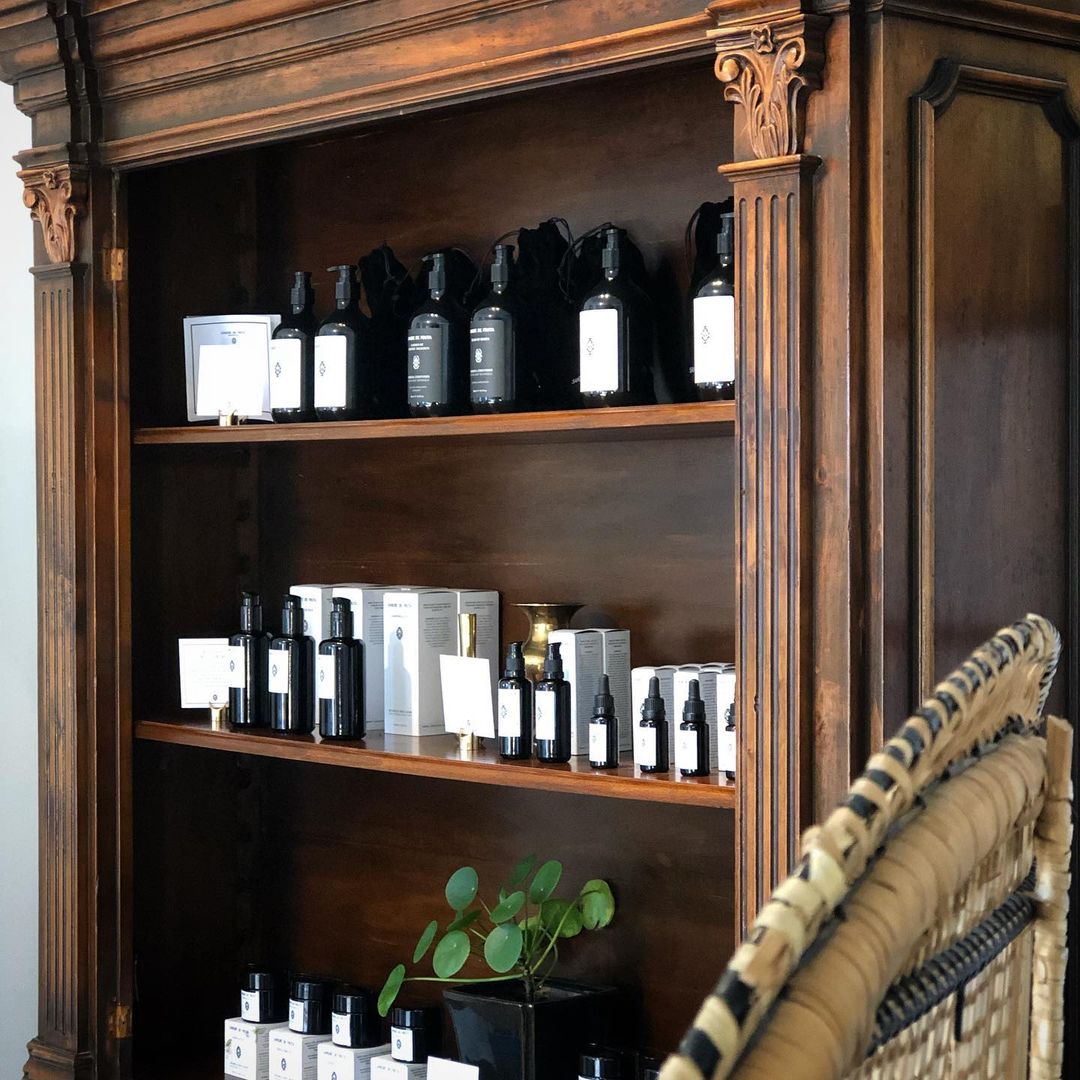 Clean products sans synthetics was also key for Allison, who had worked on various high-end beauty brand launches in the U.K.. “To me luxury is a mixture what Elena taught me, which is using grassroots ingredients, and having good intention…coupled with that idea of having an elevated experience with beautiful packaging.”

She envisioned gender neutral jars — something that could sit in a home on display and elevate a space, much like a piece of decor.

“I wanted shelf appeal,” she says pointedly. “I loved the black and white — it was inspired by the idea of dichotomy. It was gritty and represented the natural world,” she adds.

While the creams have kept their devout cult following, loyal consumers of Sangre de Fruta have embraced her expanding family of stunning products — allowing the brand to grow at a slow and steady pace.

On the business side, this usually means more capital is needed — leading Allison to bring on investors to help take Sangre de Fruta to the next level. Beyond goop, the brand can now be found in retailers like Formula Fig in Vancouver and Strange Invisible in Los Angeles.

Today, the brand is female run and a team of 15 “amazing women and moms,” she proudly says. Allison herself is a busy mom of two to daughter Penelope, 4, and son Rocco, 5 months, who she is raising on quaint Bowen Island with her husband.

Allison and her daughter Penny.

As for Sangre de Fruta, Allison has no plans to stop at just body, skincare and hair collections — and teases more new formulas could be on the way for her devout followers.

“We’re still doing a lot of development. We haven’t figured out exactly where we’re going yet with new products, but we’ve got a lot of potions that we’ve been playing with,” she says.