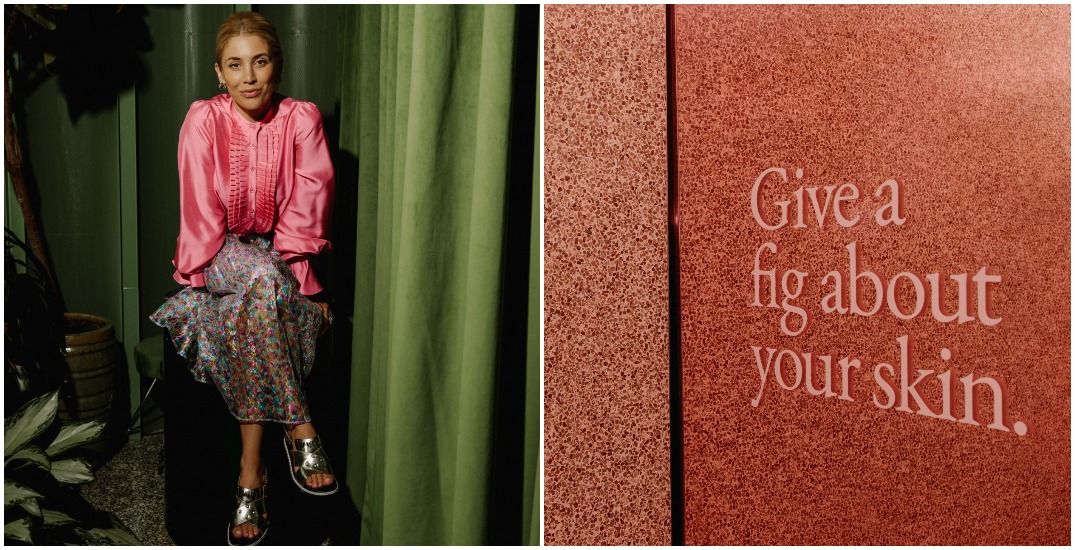 Upon entry, guests are whisked away into a green marbled oasis adorned with the A-Listers of clean beauty: Vintner’s Daughter, Goop, and Venn are all staples on these sleek silver shelves.

A velvet stool and thick curtained drapes add a ‘50s era Queens Gambit vibe that’s chic enough for the ‘gram, but undoubtedly androgynous. After a quick glance around, it’s clear Fig is anything but an ordinary facial bar. 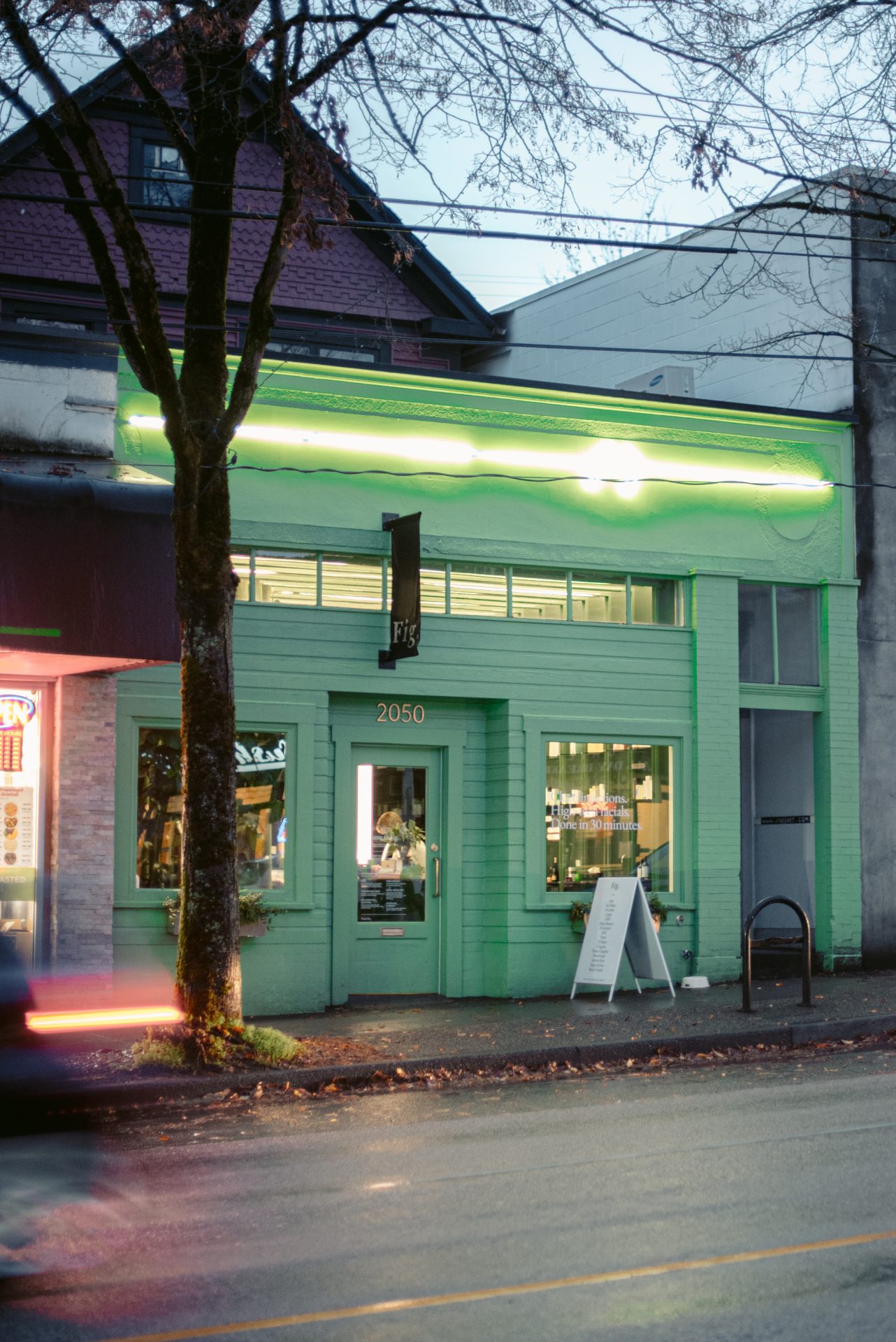 “I want [guests] to feel surprised in a good way,” founder JJ Walsh explains to Daily Hive over Google Meet.

“And uplifted. I want this 30 minutes for them. It shouldn’t be normal — it should be a slightly more exciting experience,” the London native adds. 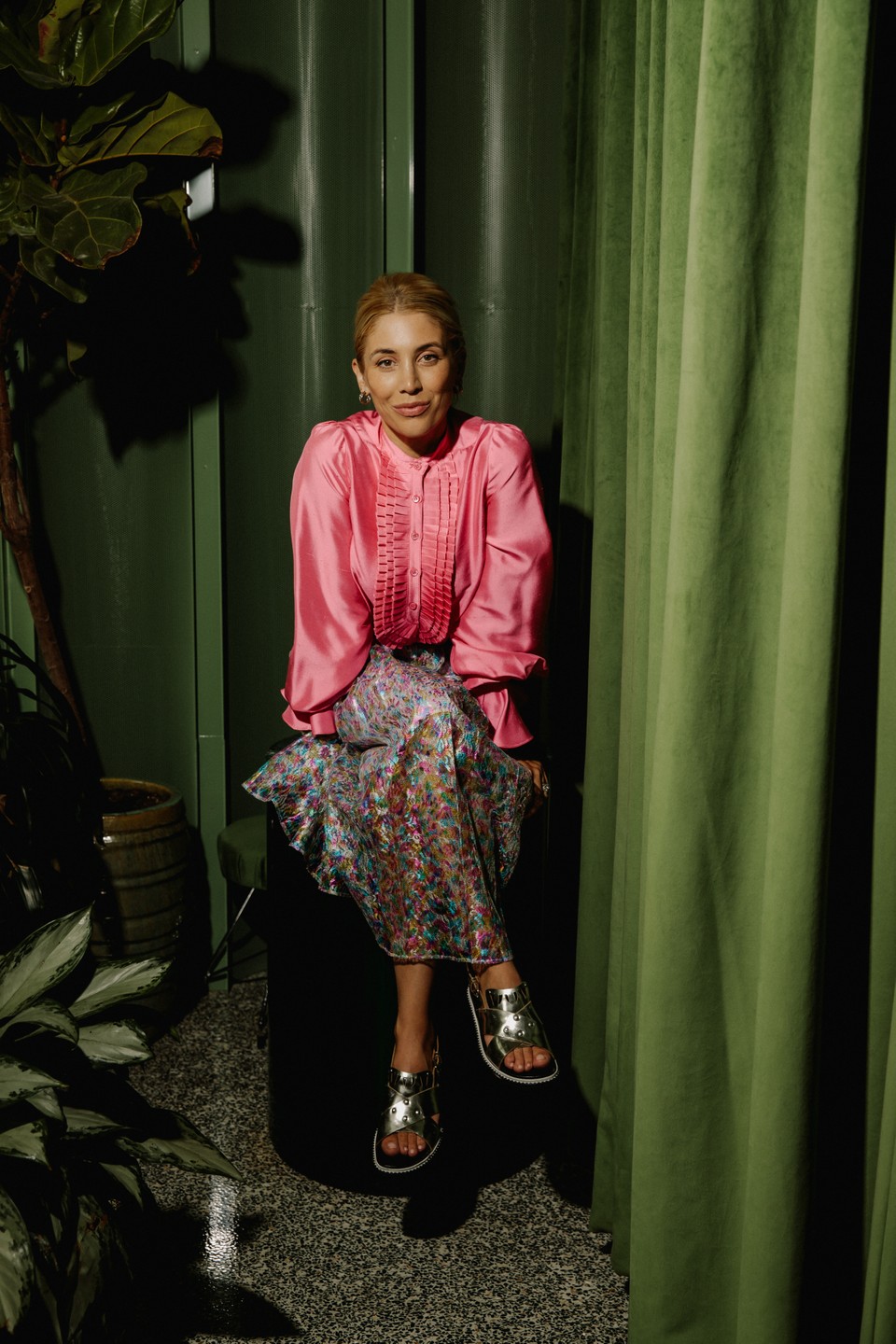 A glowing white menu on a wall lists various services, including a range of 30-minute “high-tech” facials, stingers (more on those later), vitamin shots, and more.

The selfie-friendly bathroom is a key part of the equation here: the diffuser-scented room is engulfed in a soft, glowy pink light with a mirror that cheekily reads, “Give a fig about your skin.” 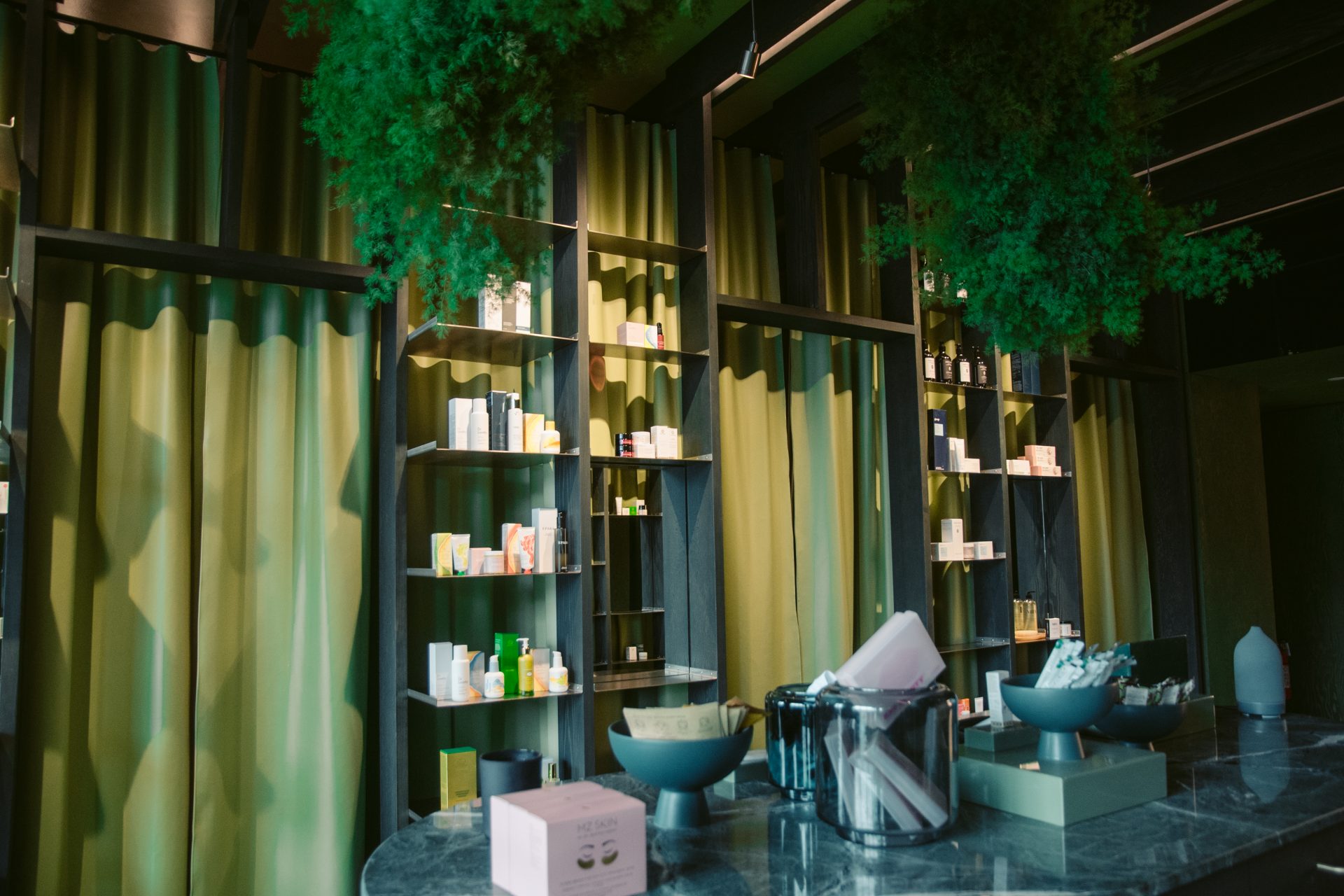 “We are an accessible technology-led skincare company who believes in experience,” JJ adds.

Of the facial offerings, guests can indulge in the collagen + texture, lift + tone, and hydrate + glow, just to name a few. Being approachable is key to their experience — as is doing away with the stigma around wrinkle-relaxing stingers (Fig offers neuromodulator Xeomin).

“I do it,” she says, point-blank. “There shouldn’t be shame around it. That’s why Fig bars will always be ground level…[neuromodulators] are really complimentary to facials as well. Facials at a certain age are good for skin health but won’t minimize wrinkles.” 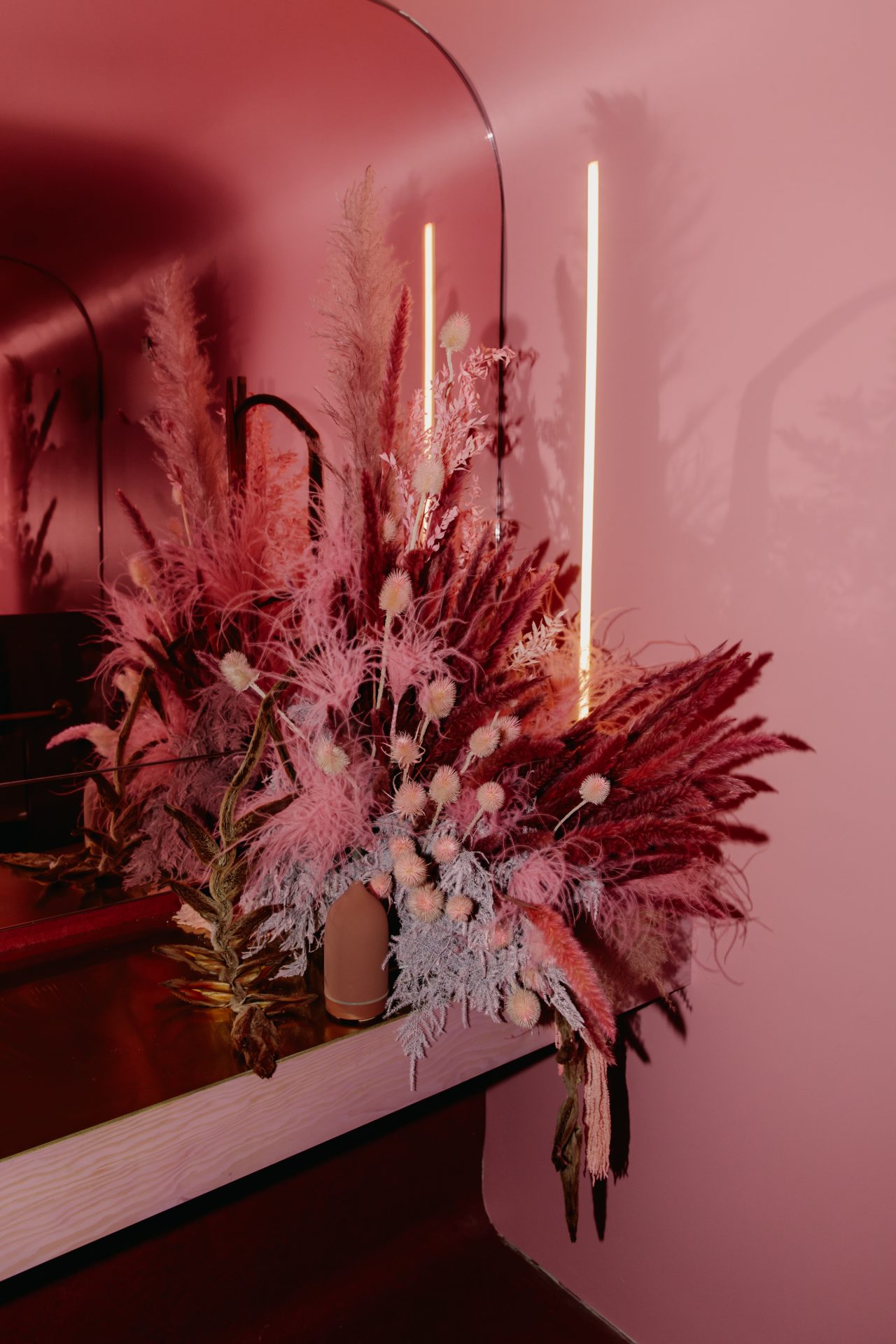 The company is also committed to skincare from the “inside out.” In addition to facials, clients also have the option to do vitamin IVs; a service typically offered at a naturopath’s office.

“A lot happens inside which definitely reflects on the outside — so we wanted to tie that in, and [have] an internal offering too,” she noted. The all-green space complimented by the pink bathroom is meant to mimic a Fig, which is classified as inverted flowers.

“I felt that the skincare/service industry was predominantly targeted to women of a certain age. Everyone has skin. Why on earth are we cutting out a huge percentage of the population? I wanted to create spaces which were gender-neutral, and everyone felt comfortable in,” she adds.

While start-up Fig is certainly a masterclass when it comes to branding and experience, it’s also a culmination of JJ’s rich experience — including a stint as an editor at Condé Nast’s Tatler. 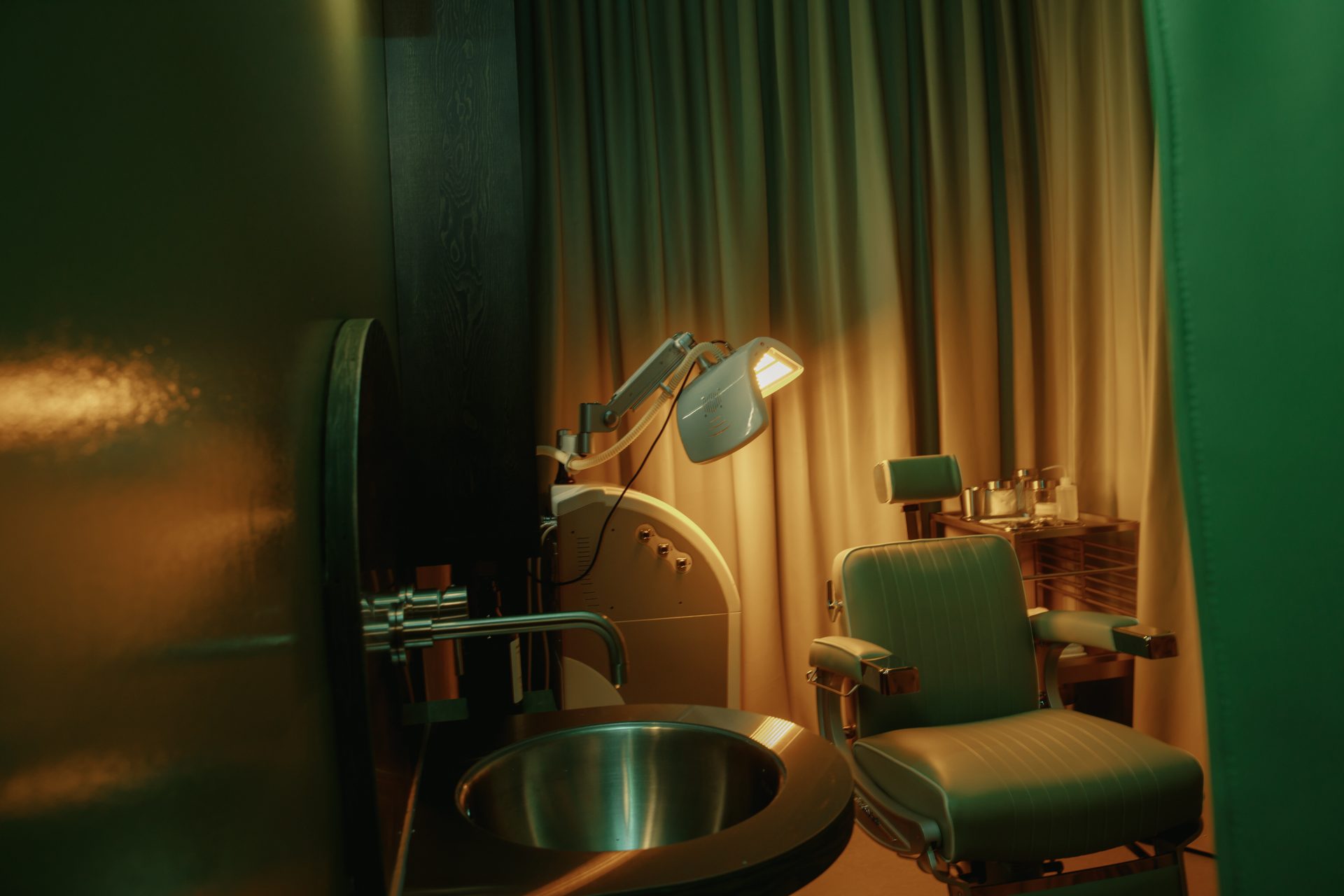 Following a “very British upbringing” that included several years at an all-girls boarding school, JJ enrolled in university to study economics and geography. “It wasn’t my thing,” she confesses. “I wanted to create.” She applied her social skills at a gig running nightclub guest lists (“much to my parent’s shock,” she hilariously adds), eventually stumbling onto an internship at Vogue.

While working in the Condé Nast UK building, JJ crossed paths with the late Isabella Blow — who, at the time, was the fashion director of Tatler (and a powerhouse in the fashion industry, known for putting designers like Alexander McQueen on the map).

“I came across this amazing woman…and I remember thinking I need to work for her,” JJ remembers. From there, she secretly dropped out of school and took a job as Isabella’s assistant. 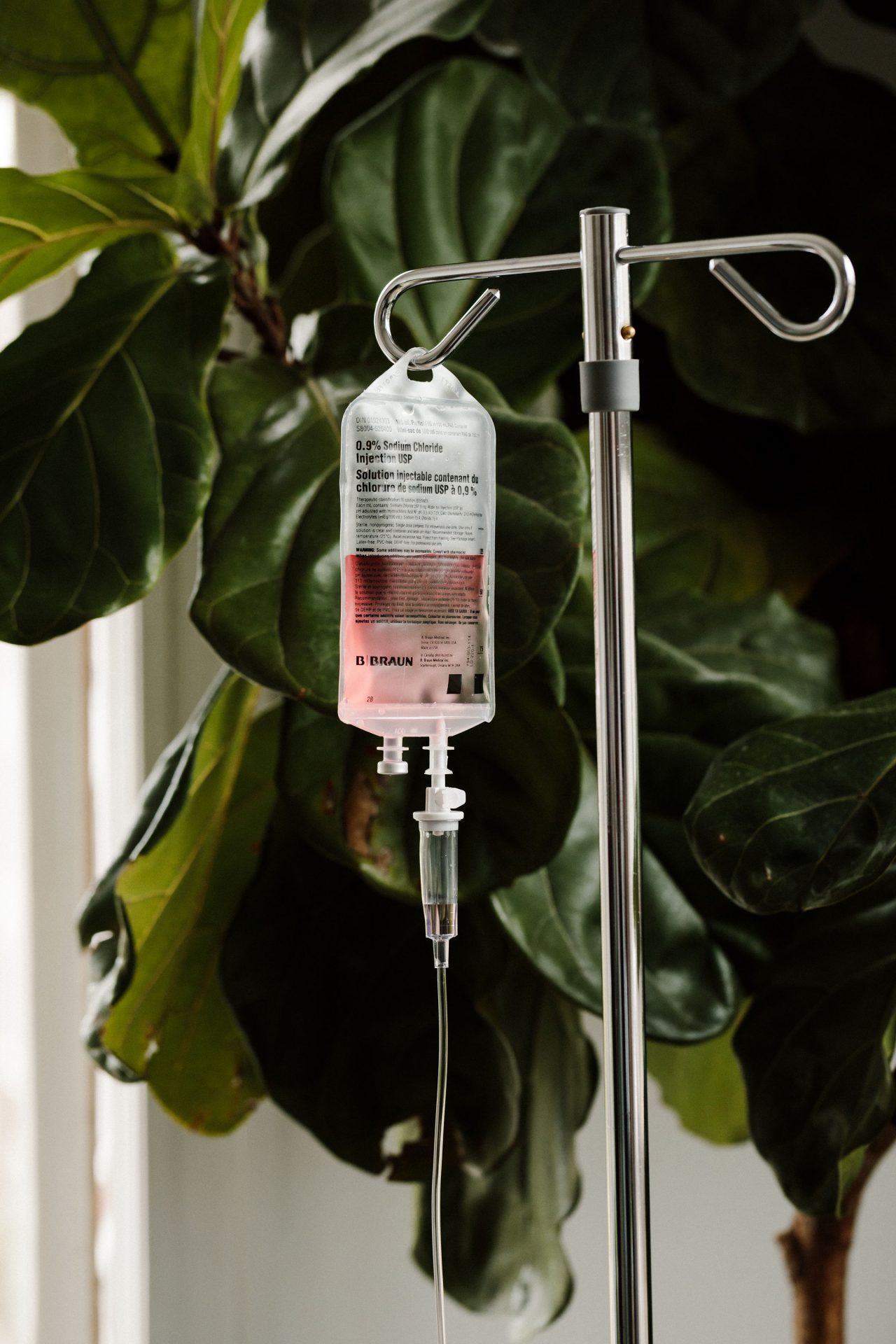 “I am so grateful for that experience….she is just so different to what I’ve ever, ever experienced. It shaped so much of who I was,” JJ says of the four years that included travelling the world. She worked her way up to being an editor, knowing she eventually wanted a family led her to make a change. “It wasn’t the healthiest…I couldn’t keep up with the lifestyle,” she adds. After leaving the magazine, she started her own luxury consultancy that sparked an interest in experimental retail, working with brands like Christian Dior.

But when her husband Oli landed a high-profile marketing gig at Aritzia in 2014, the couple packed up with two small kids and moved to Vancouver.

“I had never been to Canada before… I thought maybe this is my get out of jail free card — I would never have admitted it to anyone then — but I was struggling a little bit,” she explains. 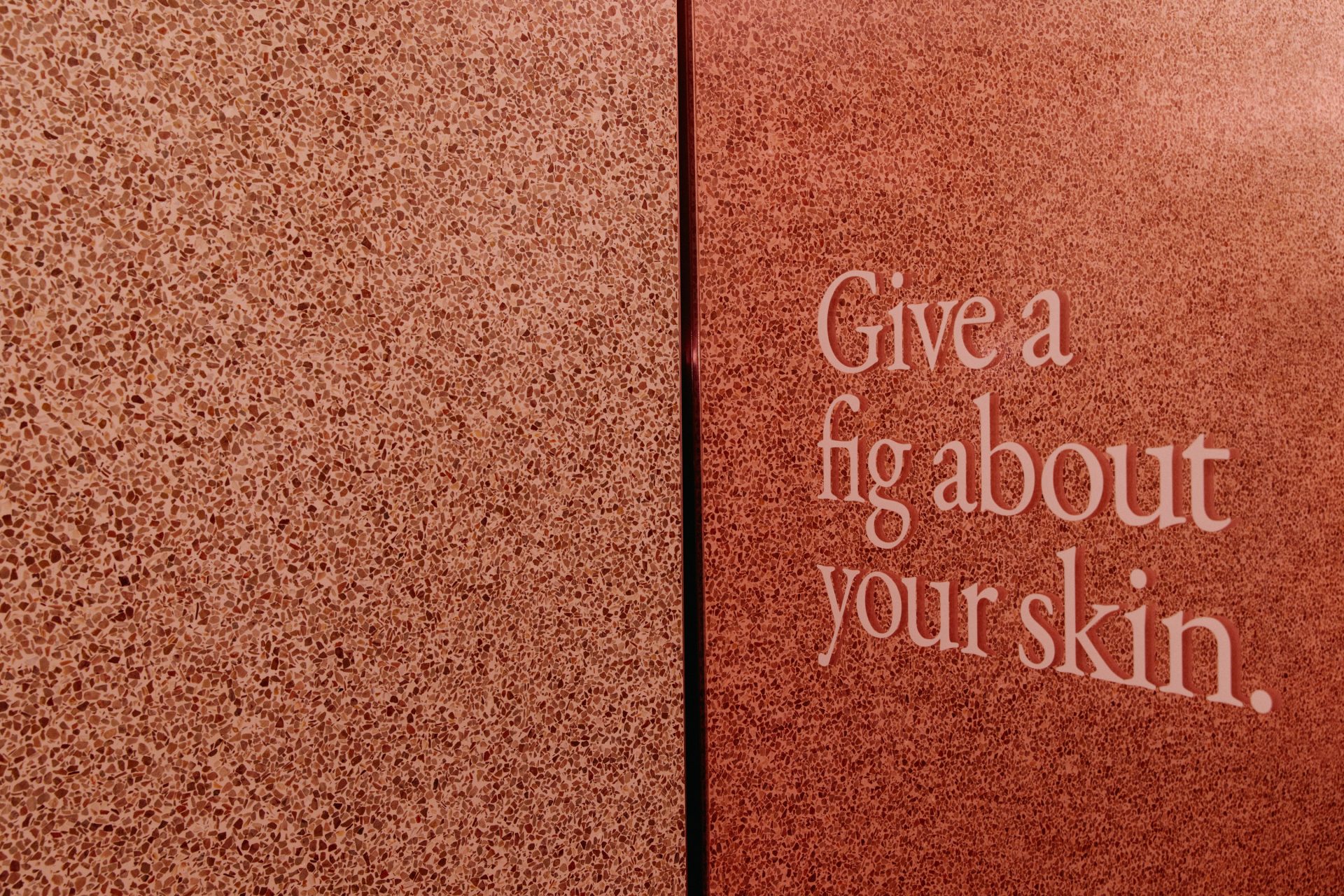 Upon landing in rainy Vancouver, style-savvy JJ admits she was “shocked” by all the yoga pants. “I thought there must be a marathon happening because everyone is just wearing workout clothes…that was the first time I had heard of Lululemon.”

A “humbling” stint as a Barre Fitness instructor, an intimidating visit to a dermatologist’s office, and a newfound passion for healthy living all sparked the initial Fig idea. “I thought, ‘how can I create community?’ I missed seeing design and architecture…I wasn’t feeling particularly great about myself and my skin.”

Clean beauty brands quickly became centric to the concept for Fig, largely inspired by Vancouver’s culture around wellness. “I’m not a hardcore aficionado just for natural products — I like the whole spectrum of skincare,” she explains, noting she began doing more research after one of her kids broke out in a rash from sunscreen. “I was a little bit surprised by what’s in some products,” she admits.

A business partner and pitch deck later, JJ was in board rooms pitching to various investors — primarily men. “They were saying ‘I’ll ask my wife, I’ll ask my daughter,’ and I’m like – ‘I’m looking at you. You’ve got skin. I’ve got skin. Let’s have this conversation,’” she says matter-of-factly.

“We’re a lean start-up,” JJ says. Of course, there was no “line” for COVID-19 shutdowns and restrictions, forcing the entrepreneur to recalibrate. “There’s a lot of challenges I didn’t expect,” she says of 2020. Relationships are at the core of her business, and that very much applies to her Fig team: unlike most beauty services in the city, JJ took a British approach and did away with tipping — but has “baked” the cost into fair staff wages. “I very strongly believe as a female leader, though, to open up possibilities to people…I want them to feel supported in having a fair salary,” she says.

The first Fig opened in 2019 on Vancouver’s 4th Avenue, followed by a second on Main Street in 2020. JJ has a third planned for Ambleside in West Vancouver this summer.

“I do credit Vancouver for changing myself and my family’s mindset, and I’m so thankful for that,” she says, revealing plans for Fig to also include locations in Toronto and Los Angeles.