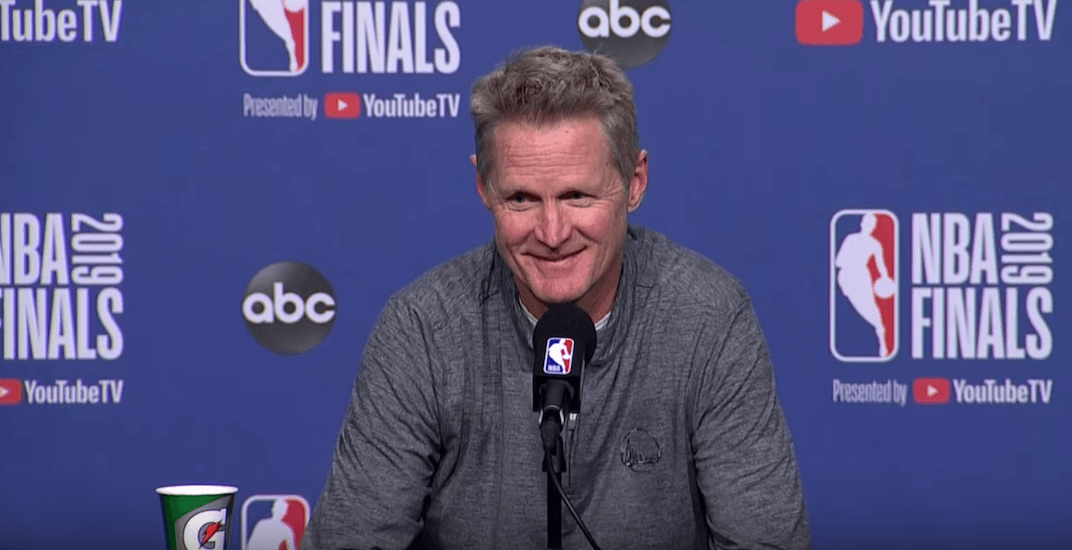 There was no panic in the voice of Golden State Warriors head coach Steve Kerr on Friday.

Speaking with the media a day after his team’s Game 1 loss to the Toronto Raptors, Kerr was very thoughtful in his answers, as he prepares for Game 2 on Sunday.

“I don’t think we played our A game, I think that’s obvious,” said Kerr. “I think we did some good things, but there are a lot of areas we need to improve.”

When asked about how his team responded to the raucous atmosphere for the first-ever NBA Finals game played on Canadian soil, Kerr was quite complimentary of Raptors fans.

“It was a great atmosphere,” said Kerr. “The national anthem was one of the coolest things I’ve ever been apart of. Hearing the crowd sing along to O Canada, it was beautiful.

“I thought our guys responded well. We’re used to playing on the road — hostile environments — all that.”

“But the crowd will never have anything to do with this team. We’re going to play our game.”

The charged-up crowd, which included Drake trolling numerous Warriors players from his courtside seat, was into the game from start to finish. Still, Kerr says his team wasn’t intimidated. In fact, he found it enjoyable.

Particularly coming from the well-mannered fans north of the border.

“It’s fun to be in these environments, to be challenged, to be threatened. Especially because the Canadian fans are so nice that even when they’re harassing us, they do it in a very polite manner.”

Steve Kerr has the Raptors winning in 8 👀😂 pic.twitter.com/gxY3nVYBlU

“I know Canada always brings the energy, especially for hockey, but it’s turned into a basketball city now,” Warriors All-Star Klay Thompson told ESPN’s The Jump before the series began.

Thompson also had praise for Canadian manners, describing what being heckled outside his Toronto hotel was like.

“It was the nicest heckle ever. It was like, ‘Boo, I hope you have a terrible day.’ It wasn’t any cuss words.

“I appreciate the respect. Thank you, Canada.”

You’re welcome Klay, we hope you have a nice stay in our country.

And thanks for Game 1.