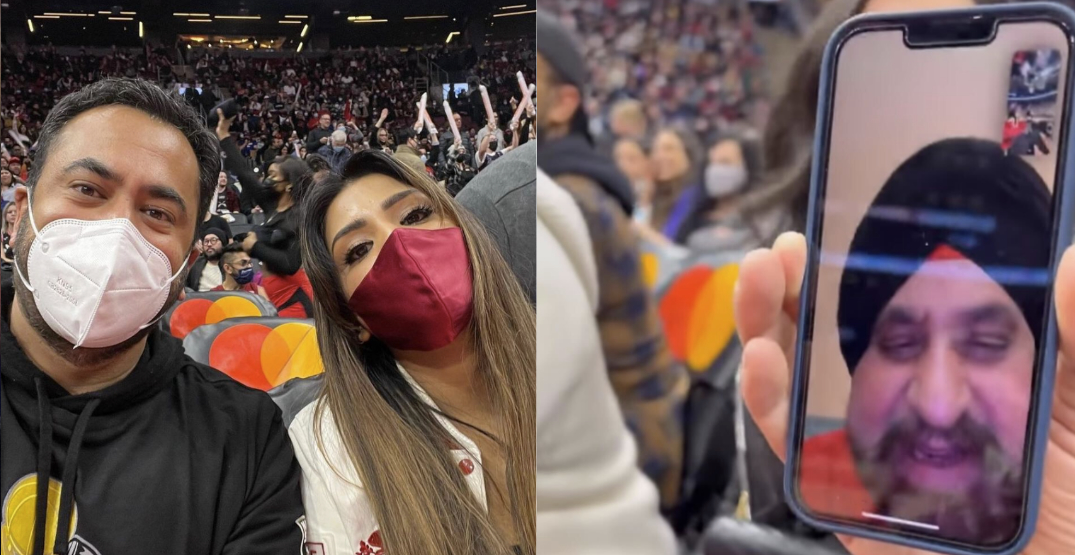 But it didn’t stop him from missing it.

And his presence was still all over Scotiabank the 90-87 win against the New York Knicks.

Bhatia had to self-isolate after recently attending Masai Ujiri’s Giants of Africa event when some attendees — including Ujiri himself — tested positive for COVID-19.

He was still in his regular seat court-side at Scotiabank Arena thanks to his daughter Tia Bhatia, actor Kal Penn and the power of FaceTime.

“What a different game this was,” Tia wrote on Instagram. “@navbhatiasuperfan you were truly missed, and that too by so many. The outpouring amount of love that everyone showed online, in person, and to the wonderful @kalpenn …really just was beautifully overwhelming.

“We FaceTimed dad while he watched the game from home. I could see how heartbroken dad was but he said, “first and foremost the safety of fans comes first.”

It’s the first game Bhatia has ever missed in Toronto.

“My heart is breaking right now,” Bhatia said via Instagram on Friday, calling it the toughest post he has ever had to make.

“Unfortunately I am currently in isolation following attending the Giants Of Africa Gala. It was an incredible event that followed all protocols but these things can happen.

“I am not experiencing any symptoms.”

“On order of Public Health every attendee has been asked to isolate. In the interest of everyone’s safety I am abiding by the recommendations.”

The Raptors home arena was flagged as potential COVID-19 exposure site by Toronto Public Health on Friday. Fans that attended Sunday’s game against the Washington Wizards at Scotiabank Arena have been advised to monitor for symptoms, and get tested if any develop.

Penn is set to produce and star in a film about Bhatia.

“It was really nice to be sitting with @kalpenn,” Tia posted. “I learned many beautiful things, but most importantly…I see why he was chosen to play The Superfan.”